The Department of Health and Ageing acknowledges the providers of the many sources of data used in this report and greatly appreciates their contribution.

Influenza activity and severity in the community is monitored by the following surveillance systems:

In the same period, 11 confirmed cases of influenza have been diagnosed. They included 7 of type A not sub-typed (6 in Qld, 1 in SA), one of type A/H1N1(Vic) and one untyped (WA).

* Delays in the reporting of data may cause data to change retrospectively. As data from the NT surveillance system is combined with ASPREN data for 2010, rates may not be directly comparable across 2007, 2008 and 2009.
SOURCE: ASPREN, and VIDRL GP surveillance system.

Figure 4. Number of respiratory viral presentations to Western Australia EDs from 1 January 2007 to 20 June 2010 by week

In the fortnight ending 11 June 2010, influenza and ILI activity as reported by state and territory Health Departments indicated that there was ‘no’ activity in one state (VIC) and ‘sporadic’ activity in all other states (Figure 6).

Figure 6. Map of influenza and ILI activity, by state and territory, during fortnight ending 11 June 2010

The case definition for ILI calls to the National Health Call Centre Network (NHCCN) has changed as of this reporting period in order to include ILI-related calls in children under 15 years of age, which were not being included in the previous case definition due to a change in recording calls by the service provider. The new case definition includes more caller groups, and as such total call numbers have increased for both 2009 and 2010.

Although ILI-related calls have been increasing gradually from the start of 2010, the number of ILI calls, and percent of total calls, remain at levels similar to late 2009 (Figure 8). Call numbers cannot be compared between early 2009 and early 2010 as not all call centres were online in early 2009. The difference in operating call centre numbers accounts for this apparent increase in recorded ILI calls (and baseline levels) between the two years.

The number of calls to the National Health Call Centre Network (NHCCN) continued to increase this reporting period, and remains at baseline levels (Figure 8).

Note: national data does not include QLD and VIC
Source: NHCCN data

Death registration data show that as at 28 May 2010, there were 96 pneumonia or influenza deaths per 1,000 deaths in NSW, which is below the seasonal threshold of 117 per 1,000 (Figure 9).
Figure 9. Rate of deaths classified as influenza and pneumonia from the NSW Registered Death Certificates, 2005 to 11June 2010.

In the week ending 9 June 2010, national absenteeism decreased, and was similar to levels seen at the same time in previous years (Figure 10). 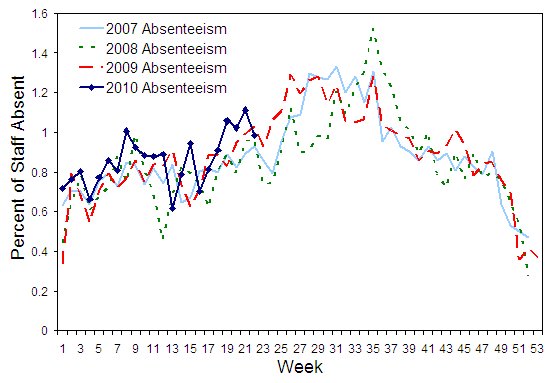 
Results from sentinel laboratory surveillance systems for this reporting period show that 2.2% (7/313) of the respiratory tests conducted over this period were positive for influenza (Table 1).

While pandemic (H1N1) 2009 is generally considered a mild disease at the community level, it has had serious consequences for some who experience it. Figures of hospitalisations, ICU admissions and deaths are currently used as indicators of the severity of the disease in Australia (Table 2).

aData for 2009 from NetEpi, Data for 2010 from NNDSS and NetEpi (NSW).
#Data are extracted from a number of sources depending on the availability of information. Figures used in the analysis have been provided in parentheses. Data are not always complete for each summarised figure.
~The denominator for this row is the number of confirmed cases for which Indigenous status is known. In 2010, 26 cases had Indigenous status unknown.
*Includes women in the post-partum period.
^Validation of data has identified anomalies affecting median ages for ICU cases and deaths in reports #28-33 2009 and report #1 2010. Correction has resulted in a change in the median ages of ICU cases and deaths from report #2, 2010.

1Note that while the analysis of severity is on-going, updates are presented as required when there are significant changes detected. With the current low levels of pandemic (H1N1) 2009 influenza activity in Australia it is anticipated that the indicators of pandemic severity will not vary significantly.

The Influenza Complications Alert Network (FluCAN) reported no influenza hospitalisations from selected hospitals for the week ending 18 June 2010. For the period of 1 March to 18 June 2010, FluCAN has reported a total of 10 influenza hospitalisations (Table 3 and Figure 11). Of those, five have been associated with pandemic (H1N1) 2009, including three with ICU admission.


Source: Influenza Complications Alert Network (FluCAN). Data are from 11 sentinel hospitals from all jurisdictions except NT.

The Australian and New Zealand Intensive Care Society (ANZICS) has reported a total of seven ICU admissions for influenza in 2010, and none for this reporting period. Of these, three have been associated with pandemic (H1N1) 2009 influenza and four with Type A not further sub-typed (Figure 12).

Table 4. Typing of influenza isolates from the WHO Collaborating Centre, from 1 January 2010 to 20 June 2010

SOURCE: WHO CC
Please note: There may be up to a month delay on reporting of samples.
Isolates tested by the WHO CC are not necessarily a random sample of all those in the community, hence proportions of pandemic (H1N1) 2009 to seasonal are not representative of the proportions circulating.

In the week ending 5 June 2010, based on FluNet reporting by National influenza Centres from 24 countries, 68.1% of positive specimens were typed as influenza B and 31.9% were typed as influenza A. Pandemic (H1N1) 2009 influenza virus accounted for 70.8% of all influenza A viruses subtyped globally by the WHO Collaborating Centres in the week ending 18 June 2010. Increasing, sporadic A(H3N2) influenza viruses are being reported globally and in some parts of Africa, the proportion of A(H3N2) virus detections have increased and have exceeded that of pandemic (H1N1). Seasonal Influenza B viruses are the predominant influenza virus in Hong Kong, China, the Russian Federation and Ukraine.1

The WHO has reported that 298 oseltamivir resistant pandemic (H1N1) 2009 viruses have been detected and characterised worldwide. All but one of these isolates showed the same H275Y mutation but were sensitive to zanamivir.1

The information in this report is reliant on the surveillance sources available to the Department of Health and Ageing. As access to sources increase and improve, this report will be refined and additional information will be included.
This report aims to increase awareness of pandemic (H1N1) 2009 and seasonal influenza in Australia by providing an analysis of the various surveillance data sources throughout Australia. While every care has been taken in preparing this report, the Commonwealth does not accept liability for any injury or loss or damage arising from the use of, or reliance upon, the content of the report. Delays in the reporting of data may cause data to change retrospectively. For further details about information contained in this report please contact the Influenza Team through flu@health.gov.au

In 2009, NetEpi, a web-based outbreak case reporting system for pandemic (H1N1) 2009, was used as the primary source of enhanced data on confirmed cases, hospitalisations and ICU admissions in all jurisdictions. In 2010, only data for NSW are sourced from NetEpi.

Analyses of Australian cases are based on the diagnosis date, which is the earliest of the onset date, specimen date or notification date.

A national organisation provides call centre data for calls relating to ILI or influenza. Data are provided daily and are collated weekly and have been presented in this report to show the pattern of calls to this Call Centre over the 2009 season. Data is available for all jurisdictions other than QLD and VIC.

The Influenza Complications Network (FluCAN) collects detailed clinical information on all hospitalised cases of influenza and pneumonia from a sample of 15 sentinel hospitals across Australia. The data for this reporting period are sourced only from 11 hospitals and do not include NT.

The Australian and New Zealand Intensive Care Society provides data from a `near real time` registry of patients admitted to Australian ICUs. This documents the key factors influencing mortality, as well as the need for hospitalisation and mechanical ventilation. Information collected includes person characteristics and information on relevant co-morbidities, nature of the clinical syndrome associated with pandemic (H1N1) 2009, major therapeutic interventions from which organ failure outcomes can be imputed, vaccination status and vital status at time of ICU discharge and hospital discharge.