The counting of every case of pandemic influenza is no longer feasible in the PROTECT phase. Influenza activity and severity in the community is instead monitored by the surveillance systems listed below.

There have been 20 new laboratory confirmed pandemic (H1N1) 2009 notifications reported this reporting period.a However, pandemic influenza activity is currently low in Australia. Sporadic cases of pandemic influenza continue to be reported without evidence of sustained community transmission (Figures 1 and 2).

a Please note that this increase in laboratory confirmed pandemic (H1N1) 2009 notifications is due to a backlog in data entry by jurisdictions. Data are subject to change retrospectively as jurisdictions are cleaning and validating their records. 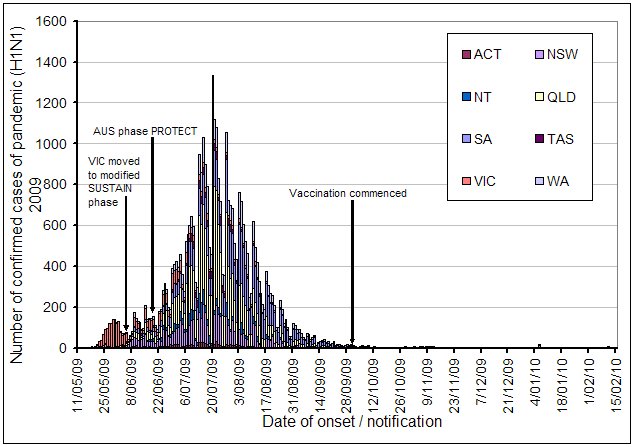 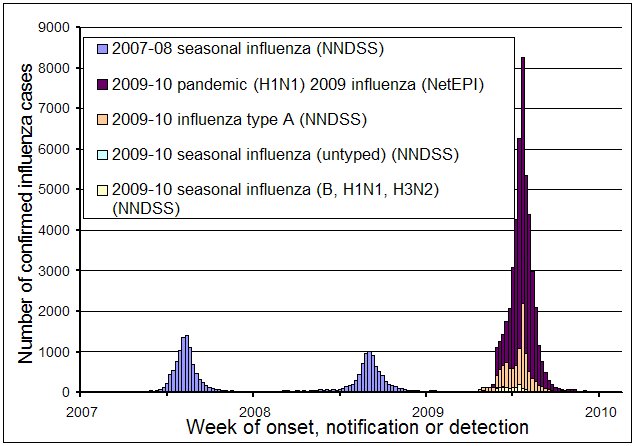 In the last week, the presentation rate to sentinel GPs in Australia was approximately 5 cases per 1,000 patients seen. 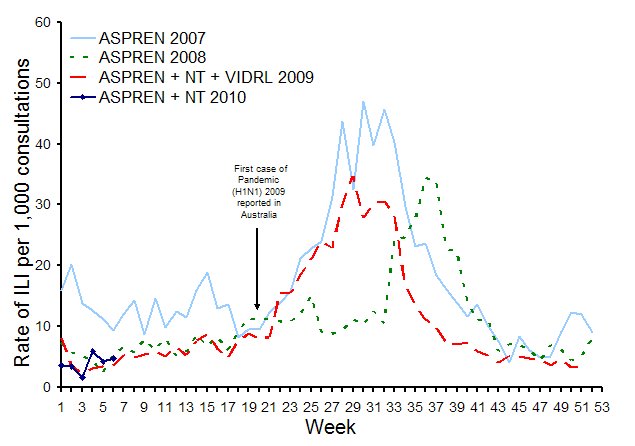 * Delays in the reporting of data may cause data to change retrospectively. As data from the NT surveillance system is combined with ASPREN data for 2010, rates may not be directly comparable across 2007, 2008 and 2009.
Source: ASPREN, and NT GP surveillance system.

The number of ILI presentations reported in Western Australian EDs decreased in the week ending 7 February 2010 and are at levels seen at the same time in previous years (Figure 4).

Figure 4. Number of Emergency Department presentations due to ILI in Western Australia from 1 January 2007* to 7 February 2010 by week 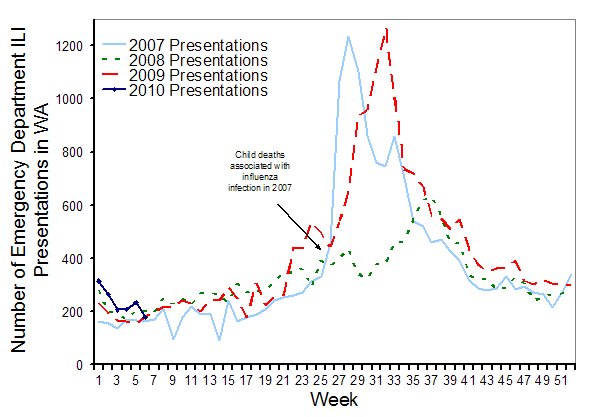 * In early July 2007 (week 26), several deaths associated with influenza infection were reported in children from Western Australia. The public response to these deaths could account for the sudden increase in ILI presentations to Perth EDs in 2007.
Source: WA ‘Virus Watch’ Report

In January 2010, there were 95 presentations with influenza –like illness to NSW EDs. This is less than the previous month (December, with 151 presentations), but is greater than the count of 65 for January 2009.

Flutracking, a national online tool for collecting data on ILI in the community, reported that activity remained at low levels both nationally and at the jurisdictional level in the week ending 14 February 2010 (Figure 5).

Figure 5. Rate of ILI symptoms and absence from regular duties among Flutracking participants by week (from 3 May 2009 to week ending 14 February 2010) 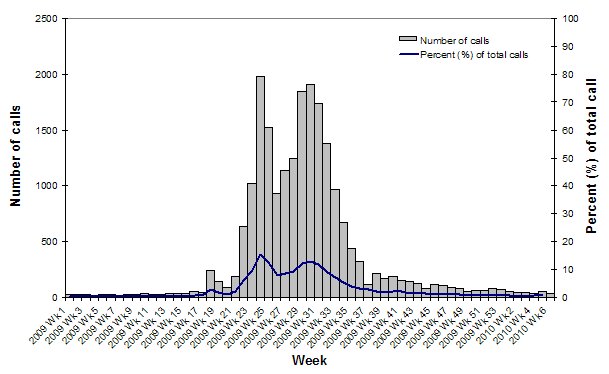 *Data in the most recent week are incomplete and will be updated retrospectively.
SOURCE: NHCCN data

Death registration data show that as at 8 January 2010, there were 101 pneumonia or influenza deaths per 1,000 deaths in NSW, which was lower than previous weeks and was below the seasonal threshold of levels expected at that time of year (Figure 7).

Figure 7. Rate of deaths classified as influenza and pneumonia from the NSW Registered Death Certificates, 2005 – 2010

The most recent data indicate that in the first four weeks of 2010 (ending 3 February), national absenteeism rates decreased slightly and were similar to levels seen at the beginning of previous years (Figure 8). 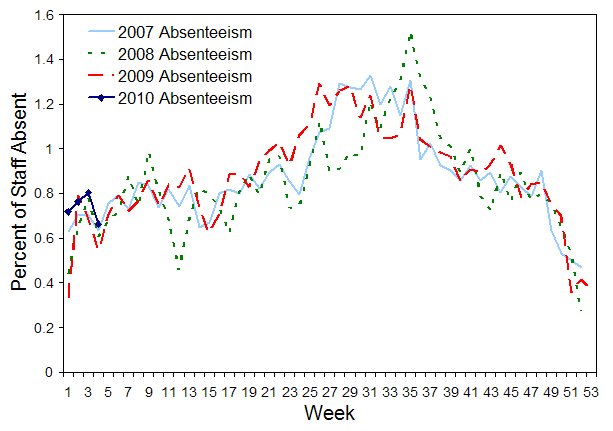 While limited laboratory data were available for this reporting period, results from sentinel laboratory surveillance systems show only one sample has been confirmed positive for pandemic (H1N1) 2009 (Table 1).


*ASPREN tests are collected every Tuesday. Results are reported for a rolling fortnight as data changes retrospectively.

From 2 January 2010 to 12 February 2010, type A was the predominant seasonal influenza type reported by all jurisdictions.

While pandemic (H1N1) 2009 is generally considered a mild disease at the community level, it has had serious consequences at the acute end of the disease. Figures of hospitalisations, ICU admissions and deaths are currently used as indicators to provide evidence on the severity of the disease in Australia (Table 2).

Table 2. Summary of severity indicators of pandemic (H1N1) in Australia, to 5 February 2010


#Data are extracted from a number of sources depending on the availability of information. Figures used in the analysis have been provided in parentheses. Data is not always complete for each summarised figure.
~The denominator for this row is the number of confirmed cases for which Indigenous status is known.
* Includes women in the post-partum period.
^ Validation of data has identified anomalies affecting median ages for ICU cases and deaths in reports #28-33 2009 and report #1 2010. Correction has resulted in a change in the median ages of ICU cases and deaths from report #2, 2010.

Table 3. Typing of influenza isolates from the WHO Collaborating Centre, from 1 January 2010 to 12 February 2010


Source: WHO CC
Please note: There may be up to a months delay on reporting of samples.
Isolates tested by the WHO CC are not a random sample of all those in the community, hence proportions of pandemic (H1N1) 2009 to seasonal are not representative of the proportions circulating. Early in the pandemic all influenza A untypeable samples were sent to the WHO CC for testing and later many pandemic (H1N1) 2009 positive samples were sent for confirmation, resulting in biases in the data.

Of the 8 influenza isolates subtyped by the WHO CC one has been antigenically characterized, and confirmed as pandemic A/H1N1 2009 (A/California/7/2009-like).

The Global Influenza Surveillance Network (GISN) continues to monitor the global circulation of influenza viruses, including pandemic, seasonal and other influenza viruses infecting, or with the potential to infect, humans. Since the beginning of the pandemic on 19 April 2009 to 6 February 2010, 153 countries shared a total of 24,005 specimens (18,557 clinical samples and 5,448 virus isolates) with WHO Collaborating Centres for further characterisation. 1

Pandemic (H1N1) 2009 influenza virus continues to be the predominant influenza virus circulating worldwide. In addition to the increasing proportion of seasonal influenza type B viruses recently detected in China (accounting for 72% of all influenza detection in the reporting week), low levels of seasonal H3N2 and type B viruses are circulating in parts of Africa, East and Southeast Asia and are being detected only sporadically on other continents.1

To date, WHO reported that 245 oseltamivir resistant pandemic (H1N1) 2009 viruses had been detected and characterised worldwide. All of these isolates showed the same H275Y mutation but all were sensitive to zanamivir. Of the oseltamivir resistant cases reported to WHO with a known clinical background, 24% were severely immunosuppressed and 23% were associated with treatment.1

As at 7 February 2010, the WHO Regional Offices reported at least 15,292 deaths associated with pandemic (H1N1) 2009 worldwide. As many countries have stopped counting individual cases, particularly of milder illness, the global case count is likely to be significantly lower than the actual number of cases. 3

In Northern Hemisphere, overall pandemic influenza activity continues to decline in most countries. The most active areas of transmission continue to be in later peaking areas, particularly in Northern Africa, South Asia and East Asia. In the Southern Hemisphere, sporadic cases of pandemic influenza continued to be reported without evidence of sustained community transmission. (1)

– peak influenza activity occurred during October in Mexico, the United States, and Canada.
Top of page

– During week 5, Bulgaria, Greece and Slovakia reported medium ILI activity. All other countries reported low activity. Of the 910 sentinel samples tested, 8% were positive for influenza A, of which the majority were pandemic (H1N1) 2009 influenza.6 Top of page

The information in this report is reliant on the surveillance sources available to the Department of Health and Ageing. As access to sources increase and improve, this report will be refined and additional information will be included.

This report aims to increase awareness of pandemic (H1N1) 2009 and seasonal influenza in Australia by providing an analysis of the various surveillance data sources throughout Australia. While every care has been taken in preparing this report, the Commonwealth does not accept liability for any injury or loss or damage arising from the use of, or reliance upon, the content of the report. Delays in the reporting of data may cause data to change retrospectively. For further details about information contained in this report please contact the Influenza Team through flu@health.gov.au

All jurisdictions except QLD are reporting pandemic (H1N1) 2009 cases using NetEpi, a web-based outbreak case reporting system. Data from jurisdictional systems are being imported into NetEpi by VIC, NSW, WA, TAS and SA, and the remainder are entering directly into NetEpi. QLD ceased reporting hospitalisations into NetEpi on 6 July 2009.

A national organisation provides call centre data for calls relating to ILI or influenza. Data are provided daily and are collated weekly and have been presented in this report to show the pattern of calls to this Call Centre over the 2009 season.