While States and Territories are system managers of their public hospitals, the Commonwealth provides a significant contribution to the delivery of public hospital services.

The following table provides an overview of Commonwealth and State and Territory contributions under the NHRA from 2013-14 to 2017-18.


The following graph provides an overview of relative funding growth between the Commonwealth and the States and Territories over this period. 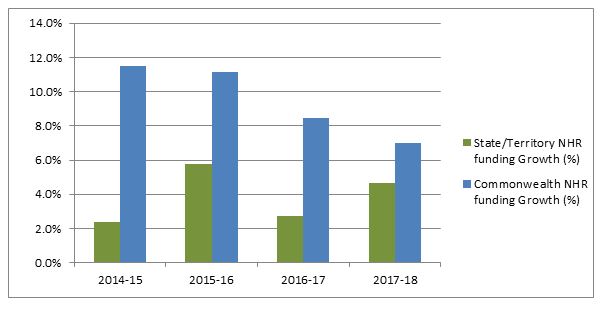 Under the National Health Reform Agreement (NHRA), the Australian Government contributes to the cost of state managed public hospitals under a system of Activity Based Funding (ABF).

Approximately 85% of Commonwealth NHR funding is paid to the States and Territories under ABF, with the remainder being paid as block funding grants (i.e. for small rural hospitals, teaching, training and research, non-admitted mental health and other public health activities).

Under the ABF model, funding for hospital services is calculated and funded on the basis of the Price and the Volume of services delivered. Where:
Listen