Enhanced surveillance of acute hepatitis B in south-eastern Sydney

This report published in Communicable Diseases Intelligence Volume 28 Issue, Number 3, discusses the need for enhanced surveillance of acute disease and the results of two retrospective reviews.

Hepatitis B is a notifiable condition in all Australian states and territories. Medical practitioners and health facilities are required to report episodes of acute disease, while laboratories must notify on positive serological results. In New South Wales laboratories are required to report only the presence of hepatitis B surface antigen (HBsAg). Without clinical information, laboratory reporting of HBsAg fails to distinguish between acute infection and chronic carriage. Since practitioner under reporting is well recognised, surveillance data are likely to underestimate the true incidence of acute clinical infection. Two retrospective reviews of an enhanced surveillance system to improve the identification of acute hepatitis B in south-eastern Sydney are presented. Over a 6-month period, the enhanced surveillance system increased the identification of acute cases by at least threefold. Over a 5-year period, medical practitioners or hospitals reported only 25 per cent of acute disease, the remainder being reported by laboratories. Approximately half of the laboratory notifications contained only HBsAg results. The availability of clinical notes, liver enzyme or IgM to core antigen results assisted the public health unit in the identification of possible acute disease. This system of enhanced surveillance has proven to be sustainable, with minimal resources required. We suggest that sentinel enhanced surveillance systems in a sample of New South Wales public health units would be an effective and efficient method to improve the surveillance of acute hepatitis B, and that laboratories be required to report IgM to core antigen, if available, when notifying a positive HBsAg result. Commun Dis Intell 2004;28:392–395.

Hepatitis B is a notifiable condition in all Australian states and territories. Medical practitioners and health facilities are required to report episodes of acute disease, while laboratories must notify on positive serological results. Under established practice in New South Wales, the only serological result required from laboratories is that of hepatitis B surface antigen (HBsAg).

Surveillance definitions in New South Wales classify cases of hepatitis B as acute (presumptive or confirmed), chronic or unspecified.1

A presumptive acute case has a positive HBsAg and clinical symptoms and signs of acute viral hepatitis where other causes of acute hepatitis have been excluded. A confirmed acute case is a presumptive case where IgM to core antigen is also positive.

Chronic carriers are cases with documented HBsAg in two blood samples collected at least six months apart. Cases for whom no further information, other than a single positive hepatitis B surface antigen is reported, are considered as unspecified. Under New South Wales guidelines, a public health response is required for cases of acute infection, but follow-up of chronic and unspecified cases is at the discretion of the public health unit director.

In the absence of clinical information, laboratory reporting of HBsAg fails to distinguish between acute infection and chronic carriage. Practitioner under reporting, however, is well recognised both in New South Wales2 and overseas.3 Therefore, surveillance data are likely to underestimate the true incidence of acute clinical infection. To improve the surveillance of acute hepatitis B in south-eastern Sydney, an enhanced surveillance system has been in place since 1992.2

All laboratory reports of positive HBsAg in south-eastern Sydney residents are triaged by the author (MJF) on the basis of clinical notes, the detection of IgM to core antigen or liver enzyme results to determine if the case can be categorised as acute or chronic. Reports of chronic disease receive no further follow-up by the public health unit. Reports of possible acute disease (based on one or more of the following: positive IgM to core antigen; clinical notes on laboratory request form which indicate acute disease; raised alanine aminotransferase, aspartate aminotransferase or both) are followed-up by a telephone call from a public health nurse, to the referring doctor, to confirm the diagnosis and onset of acute infection and collect risk factor information. For reports which cannot be categorised, a form letter with a reply paid return address is sent to the referring doctor asking whether the case was thought to be acute or chronic, based on the occurrence of jaundice, dark urine or markedly elevated liver enzyme levels. If the diagnosis was considered acute, the date of onset is sought. Where the diagnosis is returned as acute, the referring doctor is then contacted by telephone, and risk factor information is collected (Figure 1).

Figure 1. The enhanced surveillance system for acute hepatitis B 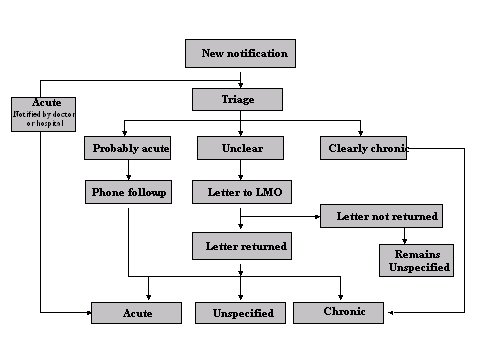 This paper presents two reviews. The first is a retrospective review of the enhanced system undertaken on data from the first six months of 2002 to assess the ability of the system to capture cases of acute hepatitis B not notified by doctors. Secondly, a review of five years of data on acute hepatitis B notifications was undertaken to explore the epidemiology of the disease in south-eastern Sydney, and to examine the method of reporting.

The South Eastern Sydney Public Health Unit received a total of 270 new notifications during the first six months of 2002. Files for five of these (all unspecified cases) could not be located, so a total of 265 notifications were reviewed in this study. Three notifications only were directly received as acute cases (one from a doctor and 2 referred from other public health units). Of the total of 262 reports, five were triaged as possibly acute cases, 115 as chronic cases and the remaining 142 cases could not be categorised. Possibly acute cases were followed up with a telephone call to the referring doctor; uncategorised cases were followed up by letter sent to the referring doctor. One hundred and five letters were returned, giving a response rate of 74 per cent. Telephone confirmation or letter contact with referring doctors identified seven acute cases among triaged laboratory notifications (all reportedly had clinical symptoms or signs of acute hepatitis at the time of medical practitioner attendance), giving a total of 10 acute cases of hepatitis B in south-eastern Sydney residents for this period. The enhanced surveillance system increased the number of cases of acute disease at least threefold, from three to 10 (Figure 2).

Figure 2. Outcome of new notifications reported to south-eastern Sydney in Epi Weeks 1 to 26, 2002 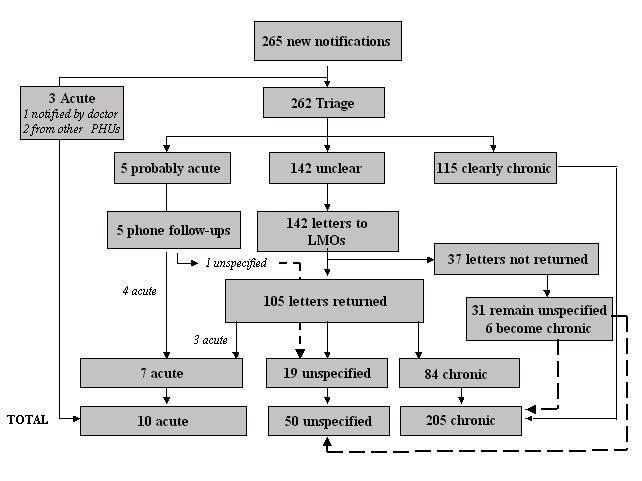 The incidence of acute hepatitis B remained fairly steady between 1998 to 2002, ranging from 20 to 24 cases per annum, and giving a total of 108 cases over this 5-year period (2.8 cases per 100,000 per annum). The incidence peaked in the 20–24 year age group, followed by the 25–29 year age group. No cases were reported in children less than 15 years. The incidence of females to males was 1:2.8. Risk factors for acute infection (n=69) based only on the report of the referring doctor included intravenous drug use (n=20), unprotected sexual activity (n=28: 13 heterosexual; 7 homosexual; 8 unspecified), unspecified high-risk behaviour (n=4), percutaneous exposure (n=6), occupational exposure (n=2), and other (n=7). More than one risk factor was identified in 10 cases. No risk factors were identified in 12 cases.

Amongst laboratory notifications, 32 contained HBsAg results only, while 39 contained additional hepatitis serology results (11 laboratory results were missing at the time of review). Acute cases were more likely to be suspected if serological results in addition to HBsAg were included with the laboratory notification, and therefore more likely to be triaged initially to telephone follow-up, rather than letter follow-up.

Hepatitis B is one of the most frequently reported notifiable conditions in New South Wales. Most reports are considered chronic infections, with only a small proportion known to be acute. In 2001, the notification rate for acute infection in New South Wales was 1.3 cases per 100,000 population.4 However, this study indicates that this figure is likely to be a considerable underestimate, since notification by medical practitioners is not complete, and laboratory notification of positive HBsAg does not identify acute disease. In 2001, south-eastern Sydney had a rate of 2.6 cases per 100,000 population, twice that of New South Wales, and more than the surrounding health service areas of Central, Western and South Western Sydney (2/100,000, 0.4/100,000 and 1.6/100,000 respectively).4 The ratio of notifications of acute disease to other cases (chronic and unspecified disease combined) varied considerably between south-eastern Sydney and New South Wales overall. One acute case was notified for every 29 notifications of chronic or unspecified disease in south-eastern Sydney compared with the New South Wales figure of one acute case for every 53 notifications of chronic or unspecified disease. The reasons for this discrepancy are unclear, and may be a reflection of variations in the incidence and prevalence of disease in the community, the extent of screening by medical practitioners, or, indeed, the effect of increased case identification due to enhanced versus routine surveillance.

Accurate identification of new infections is important if variations in the patterns of disease or in the prevalence of risk factors are to be detected, and for the evaluation of the effectiveness of hepatitis B vaccination programs. In the absence of complete reporting by medical practitioners, case ascertainment is problematic without some form of enhanced surveillance system. Surveillance of acute cases could be assisted if laboratories were required to report the results of all antibody and antigen tests undertaken, rather than only the HBsAg result. Recent changes to the Medicare Benefits Schedule which have simplified requests for hepatitis serology to three items (1 November 2002)5 may still not provide public health units with the necessary information (such as IgM to core antigen) to identify acute infections in the absence of clinical data. For example, Item 69481 which provides three tests for the investigation of infectious causes of acute or chronic hepatitis will not provide IgM to core antigen if tests for antibodies to hepatitis A and C, and hepatitis B surface antigen are performed.

By comparison, the more centralised structure of the Victorian notification system means that notifications are received from a limited number of laboratories, and serological data (in particular IgM to core antigen) in addition to HBsAg are usually reported, aiding identification of acute disease (M Moloney, Department of Human Services, Victoria, personal communication, 25 November 2003). This may explain why the Victorian notification rate in 2000 was higher than the New South Wales rate (2.4 cases per 100,000 population6 versus 1.5 cases per 100,000 population7).

The system of enhanced surveillance of acute hepatitis B operating in the south-eastern Sydney area improves acute case ascertainment compared with routine surveillance. It has proven to be a sustainable system, with minimal additional staff time required (estimated to be 5–10 minutes per week for triage, 5–10 minutes per week for telephone follow-up and 30 minutes per week in sending follow-up letters). Even so, such a system comes with an opportunity cost in that limited staff resources are diverted from other tasks. Sentinel enhanced surveillance systems in a sample of New South Wales public health units may be an effective and efficient method of improving the surveillance of acute hepatitis B. We would also recommend that laboratories in New South Wales (and elsewhere) be required to report IgM to core antigen, if available, when notifying a positive HBsAg result, to assist in the identification of acute disease. As liver enzyme results also assisted the triage process, we believe that inclusion of liver enzyme results with the notification would be of value.

We wish to acknowledge the key role played by the staff of the South Eastern Sydney Public Health Unit and the clinicians in this surveillance system.

This article was published in Communicable Diseases Intelligence Vol 28 No 3, September 2004.