This report published in Communicable Diseases Intelligence Vol 29 Issue Number 2, discusses the potential for Australian bat lyssavirus to transfer from infected animals to humans. It discusses two cases where humans were bitten by potentially infected dogs.

Human infection with Australian bat lyssavirus (ABLV) was first reported in November 1996, six months after the first identification of the virus in a flying fox in May 1996.1,2,3 Only two human cases of ABLV infection have been described to date, although hundreds of potential human exposures to ABLV have been reported.4,5 No cases of ABLV infection in other Australian mammals have been reported, although a number of animal exposures to ABLV positive bats have been investigated. The CSIRO Australian Animal Health Laboratories (AAHL) have undertaken some investigation into the effects of exposure to ABLV in terrestrial species, although this has been limited to preliminary studies in dogs and cats.6 Experimentally infected animals showed mild transient behavioural changes within 2–3 weeks of exposure and seroconversion to ABLV within three months.7 The natural end point of ABLV infection in dogs and cats is unknown.

Current public health guidance considers the risk of transmission of ABLV from a dog or cat to a person is very low.6 Furthermore, owners are advised that although the animal has a remote possibility of being infected with ABLV, it should be observed closely for at least three months and to report any behavioural changes that occur.6 We present two cases where the behaviour of dogs after potential exposure to ABLV posed significant questions for veterinary and public health authorities.

On 16 January 2004, the Brisbane Southside Public Health Unit (BSPHU) was notified of an ABLV positive result on a black flying fox ( Pteropus alecto). BSPHU investigations revealed that the bat was actually found on 2 January 2004, when the family pet, a 2-year-old desexed female Alsatian-Kelpie cross was observed barking at the bat on the ground and brought the bat to the owner's attention. The owner did not witness any direct contact between the dog and the bat. Initial reports (16 January) suggested that there were marks on the bat body that may have been attributable to attack by the dog. However, subsequent post mortem examination (19 January) found small multiple holes on both wing membranes (Figure), and no lacerations on the body or head that were consistent with dog bites.

Figure. Multiple small holes on patagia of bat in Case 1 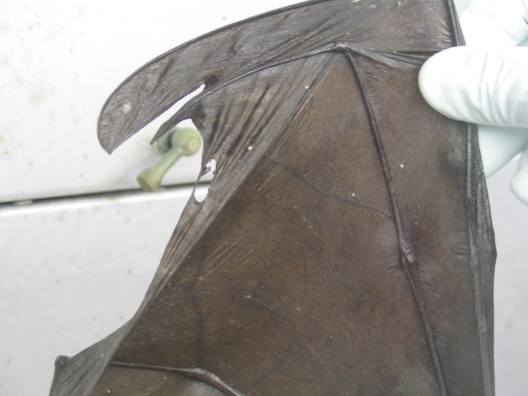 Seven days after the dog's potential exposure (9 January), the dog was relocated to the home of another family member. Up until 11 January the dog behaved normally. However, after that time the dog became more aggressive and bit the owner on 14 January and the owner's partner on 15 January. Although provocation could not be ruled out in one attack, all family members attested to the behavioural change in the dog, some 9 to 11 days after possible exposure to an ABLV positive flying fox. By 19 January 2004, the dog was reported to be well with no signs of persistent aggression. Consultation with national public health and veterinary authorities determined that the possibility of the dog being infectious with ABLV during the time of the attacks on humans could not be excluded and post exposure prophylaxis was provided to the owner and partner.

The dog was placed into quarantine in a secure, purpose-built facility at the Department of Primary Industries and Fisheries Animal Research Institute at Yeerongpilly, Brisbane. The dog's general health and behaviour were monitored daily, salivary samples were collected twice weekly, and serial blood samples were collected fortnightly over the six month quarantine period. The saliva swabs were subject to quantitative real time polymerase chain reaction (PCR) (Taqman TM ) analysis at the Public Health Virology, Queensland Health Scientific Services (QHSS). Sera were forwarded to AAHL where they were screened for antibodies to ABLV by rapid fluorescent focus inhibition test. No salivary swabs were positive for ABLV antigen on PCR and no antibody titre to ABLV was detected. The dog's health and behaviour remained normal. At the end of the quarantine period, it was released to the owners.

On 1 April 2004, the BSPHU was notified of a dog attack on a young child. The child had been attacked by one of two family pet dogs, an 18-month-old Rhodesian Ridgeback. In late January 2004, the bloodied remains of a bat had been found on the dog's bed outside the family home. The bat was not submitted for analysis. On 18 March, following a storm, the apparently well and unprovoked dog savagely attacked the young family member who required extensive surgery following the attack. The dog was previously well-behaved with no history of aggression according to current and previous owners and had been in the family for five months with no behavioural problems. The dog was taken to the local dog pound and destroyed. No comments were recorded about the physical condition of the dog and the remains were unavailable for examination. The veterinarian was informed of the possible exposure to the bat in January but noted the current Commonwealth advice that dogs were unlikely to be infected with ABLV. Subsequent contact by the family with Department of Primary Industry researchers led to the notification to the BSPHU.

After discussion with national public health authorities it was decided to offer the child a course of post exposure rabies vaccination including rabies immunoglobulin.

Bats are the putative natural host of ABLV. Natural infections have been recorded in both megachiropteran (flying fox) and microchiropteran (insectivorous bat) species.5 While the crude prevalence of ABLV infection, as determined by direct fluorescent antibody test on fresh brain impression smear, in free-living flying foxes is less than one per cent, in sick and injured flying foxes it is 6.5 per cent.5 This positive association is a reflection of the clinical disease attributable to ABLV infection in bats. Because infected bats are debilitated, and typically found on the ground or roosting close to the ground, they have the highest probability of contact with concerned humans and inquisitive companion animals. Despite the absence of any recorded ABLV infection in terrestrial carnivores, a decision was made to quarantine and monitor the Case 1 dog based on its possible direct contact with an ABLV positive bat and the similarity between her reported behavioural change 9–11 days post-putative exposure and the transient behavioural change reported in experimentally infected dogs 2–3 weeks post inoculation.7

The absence of ABLV transmission in species other than bats is consistent with the view that lyssaviral infections are host-specific.8 However, the two human cases tragically demonstrate that ABLV can infect non-bat species. While there is no historic or contemporary evidence of ABLV infection in dogs or cats, animal health authorities in Australia recognise at least a theoretical possibility of infection in these species, and recommend testing bats known or suspected to have had at-risk contact with companion animals.6 In the last five years, 144 bats (115 with putative dog contact and 29 with putative cat contact) have been screened by direct fluorescent antibody test at the Animal Research Institute or QHSS. Of these, five bats with putative dog contact have tested positive. That is, five dogs have had a high risk of exposure to ABLV. Consistent with the risk minimisation approach, the Department of Primary Industries and Fisheries advised the owners of each of these dogs to place them under a 90 day home quarantine, in line with AUSVETPLAN recommendations.9 None of the owners reported symptoms in their dogs consistent with ABLV infection, however interpretation of these negative findings is limited by the small sample size (n= 5) and by the lack of certainty of exposure of any of the dogs.

Experimental ABLV infections in dogs undertaken at AAHL produced transient behavioural changes 2–3 weeks post-innoculation, but no observed clinical disease.7 However, while the experimental studies appear to support the finding of absence of disease in dogs, interpretation of the experimental findings should be made with care. The study had several limitations: small numbers of young (possibly immunologically immature) animals were used; the inoculum was laboratory passaged and possibly attenuated; animals were observed for only three months post-innoculation and attempts to recover virus were limited to a single cell culture passage. Although virus could not be recovered from the brain of any of the ABLV challenged animals, attempts to isolate rabies virus from a control experimentally infected cat were also unsuccessful. However, the observed behavioural changes and the detection of anti-ABLV antibody in the cerebrospinal fluid of two of the inoculated dogs and one cat suggests infection reached the central nervous system. Thus there is some evidence to support the possibility of sub-clinical or mild clinical ABLV infection in dogs under experimental conditions.

While historic data on cross-species lyssaviral infection is limited (arguably due to the lack of availability of molecular techniques), there have been a number of recent reports of 'spill-over' of bat-variant rabies and European bat lyssavirus to terrestrial species.10–16 Even more disturbing is the recent report of an outbreak of bat-variant rabies in skunks.12,17 It is evident that lyssaviruses show a strong evolutionary association with bats – genotypes 2, 4, 5, 6 and 7 solely or predominantly infect bats and genotype 1 infects terrestrial carnivores and bats (the reservoir of genotype 3 is unknown). Further, it is now argued on the basis of molecular evidence that genotype 1 (terrestrial rabies) historically evolved from bat lyssaviruses.18

The case studies presented above highlight the uncertainty that still exists about the potential for ABLV to be transmitted to other non-human mammalian hosts. The available research did not satisfactorily resolve all the questions that were raised about the risk of bat-dog-human transmission in these two scenarios. Consequently, after extensive consultation, public health authorities recommended rabies post exposure prophylaxis to the affected persons. From a public health perspective, further studies in Australian domestic and wild carnivore species are necessary to more conclusively demonstrate the ability of ABLV to infect these species. This will enable public health officials to make more confident assessment of the risk of human ABLV infection associated with a bite from an exposed dog or cat.

The authors gratefully acknowledge the cooperation of the owners of both dogs, and the assistance and support of colleagues at the Department of Primary Industries and Fisheries Animal Research Institute (especially Pat Kalinowski, Andrew Kelly, Geoff Dawson, Barry Rodwell and Craig Smith), at Queensland Health (especially Margaret Young, Don Staines, Andrew Langley), from the Communicable Diseases Network Australia (Robert Hall and Vicki Krause), and at the Australian Animal Health Laboratory.

1. Allworth A, Murray K, Morgan J. A human case of encephalitis due to a lyssavirus recently identified in fruit bats. Commun Dis Intell 1996;20:504.

This article was published in Communicable Diseases Intelligence Vol 29 No 2 June 2005.