This report will be published in the Communicable Diseases Intelligence Volume 29 Issue No 3 - due for publication in September 2005.

Aedes albopictus, the so-called ‘Asian tiger mosquito,' which has invaded areas of the Pacific, the Americas, Africa and Europe, and been intercepted in various Australian seaports in recent years, has now become established on a number of Torres Strait islands in northern Queensland and threatens to invade mainland Australia. As well as being a significant pest with day-biting tendencies, Ae. albopictus is a vector of dengue viruses and is capable of transmitting a number of other arboviruses. The species colonises domestic and peri-domestic containers, and can establish in temperate areas with cold winters. According to predictions made using the CSIRO climate matching software CLIMEX, ® Ae. albopictus could become established elsewhere in Australia, including southern Australia, and lead to these areas becoming receptive to dengue infections—a condition that currently does not exist because the vector Aedes aegypti is confined to Queensland and no species in southern Australia is known to be capable of transmitting dengue. Commun Dis Intell 2005;29:In press.

Aedes albopictus, the so-called 'Asian tiger mosquito', is indigenous to South East Asia and some islands of the western Pacific and Indian Ocean, but in recent decades has invaded and become established in the eastern Pacific, North and South America, Africa, Europe and the Middle East. Australia has been at risk of invasion as well; between 1997 and 2005 there were at least 28 interceptions of Ae. albopictus by the Australian Quarantine Inspection Service and other authorities at Australian international seaports (including Darwin, Cairns , Townsville, Brisbane, Sydney and Melbourne), but diligent surveillance and border control activities have prevented its introduction to, and establishment on, mainland Australia.

The species has been known to be in mainland Papua New Guinea1 and its southern island of Daru2 for some years, thus posing a threat to the Torres Strait islands and to mainland Australia through the frequent sea and air travel that occurs in the region, but until 2005 no Ae. albopictus activity had been detected in the Australian region. However, in April 2005, mosquito collections on Yorke Island in the eastern Torres Strait were found to include adults of Ae. albopictus, although the species had not been recorded on that island in a 2001 survey, or on any other island during surveys associated with dengue activity in the Torres Strait in recent years. Following the Yorke Island discovery, a delimiting survey during April/May 2005 to determine the geographic extent of the infestation in the region revealed the species was established on 10 of the 17 inhabited islands in the Torres Strait but not in any of five communities surveyed on the adjacent mainland (Cape York Peninsula) of Australia.

Aedes albopictus is an aggressive day-biting pest, able to colonise domestic and peri-domestic natural and artificial container habitats in both tropical and temperate environments, and with desiccation resistant eggs that facilitate its dispersal in portable containers.3 It has been reported often to be associated with dengue viruses, and it is a capable laboratory vector although its susceptibility to dengue viruses varies among populations.4,5 It may serve as a maintenance vector of dengue viruses in rural areas of South East Asia, but it has generally been thought to be not an important urban vector when compared with the principal vector species Aedes aegypti throughout the range of dengue activity.6

However, historically, Ae. albopictus has been responsible for dengue transmission in countries where Ae. aegypti was absent, e.g. Japan and parts of China.6,7,8 More recently, it has been responsible for dengue transmission in an extensive outbreak in the Seychelles in 1976–1977,9 and reports of significant local dengue infection in Macao in 200110 and in Hawaii in 200111 have been associated with Ae. albopictus on the grounds that it was abundant whereas Ae. aegypti appeared to be absent. Also of concern is the fact that as well as the dengue viruses, Ae. albopictus is a competent vector under experimental conditions for at least 22 arboviruses, including the internationally important yellow fever virus, the recently introduced to Australia Japanese encephalitis virus, and the Australian local Ross River virus.8

In Australia, local transmission of dengue viruses is restricted to Queensland (particularly coastal northern Queensland ) where Ae. aegypti is found, and other regions currently have no known vectors of dengue. The widespread establishment of Ae. albopictus in the Torres Strait provides many and various opportunities for the introduction of the species into mainland Australia. The international distribution of Ae. albopictus is limited by factors such as daylength, temperature, rainfall and humidity. Nonetheless, there is evidence that tropical strains of Ae. albopictus have adapted to cooler temperate regions when introduced into South America,12 and temperate strains arguably could persist in southern cool zones of Australia as they have in northern cold regions of North America when introduced from Japan.3

The potential distribution of Ae. albopictus in mainland Australia was determined using the CLIMEX® model.13 CLIMEX® infers the response of a species to climate from its known distribution elsewhere and describes the potential for permanent establishment with an Ecoclimatic Index (EI) for each location. The CLIMEX® model of Ae. albopictus used by Sutherst 14 was modified to predict the incursion by a tropical strain. The value of the higher optimal temperature parameter, DV2, was increased from 27° C to 30° C and that of the lethal high temperature, DV3, was increased from 30° C to 37° C. The model accurately reproduced the range limits of the species in North America (http://www.cdc.gov/ncidod/dvbid/arbor/albopic_97_sm.htm).

The Figure shows the potential aggregate distribution of both tropical and temperate biotypes of Ae. albopictus in Australia, as estimated using CLIMEX.® All of the north, east and south-east coasts as far south as Victoria are suitable for Ae. albopictus establishment, as is the south-west of Western Australia. These areas include most of Australia 's major population centres. Marginal populations of Ae. albopictus may persist in parts of South Australia, central and western Victoria and Tasmania. The arid interior is estimated to be unsuitable but could support populations in domestic environments where artificial water containers exist. Cold stress was a limiting factor only in Tasmania and the alpine regions of New South Wales and Victoria. Of note is the strong suitability along the eastern coast of Cape York, which could serve as a corridor for the introduction of Ae. albopictus from the Torres Strait into the eastern mainland of Australia.

Figure. The potential distribution of Ae. albopictus as determined by climate in Australia, estimated by the CLIMEX Ecoclimatic Index with a scale from zero for failure to establish up to 100 for optimal for growth throughout the year 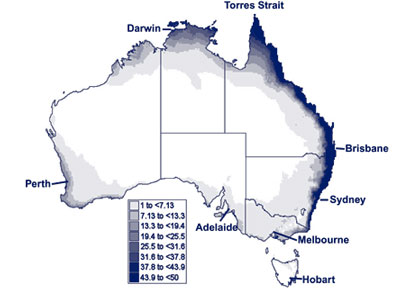 The dark shading shows the areas that are most climatically suitable for the mosquito.

While these coastal locations should be deemed to be receptive to dengue transmission once Ae. albopictus became established, their vulnerability will depend upon the likelihood of introduction of dengue viruses with incoming tourists and returning travellers. However, in this respect, all states and most major cities throughout Australia in recent years have reported dengue infections acquired internationally (see Annual Reports of the National Notifiable Diseases Surveillance System), and the arrival of a viraemic traveller in an Australian area with Ae. albopictus should be viewed as a public health concern.

The purpose of this report is to quickly notify the Australian health community of the establishment of Ae. albopictus in the Torres Strait, and the potential for the species to be introduced to major populations of Australia and provide for the transmission of dengue viruses where currently no vector exists. Details of the initial mosquito collections of Ae. albopictus and the delimiting surveys in the Torres Strait and on Cape York, and the genetic associations of the various populations and their epidemiological implications, are the subject of a separate paper being prepared for publication.