Zoonotic tuberculosis: on the decline

This paper describes a case of pulmonary Mycobacterium bovis in a butcher and reviews factors responsible for the declining incidence of this disease in Australia.

Mycobacterium bovis is a zoonotic member of the Mycobacterium tuberculosis complex responsible for a clinical syndrome indistinguishable from that due to M. tuberculosis. In Australia, infection with M. bovis has historically been associated with employment in the livestock industry or immigration from countries in which animal disease is endemic. It currently accounts for 0.2% of all human cases of tuberculosis within Australia. This paper describes a case of pulmonary M. bovis in a butcher and reviews factors responsible for the declining incidence of this disease in Australia. Commun Dis Intell 2010;34(3):339–344.

Mycobacterium bovis is a member of the Mycobacterium tuberculosis complex (MTBC) responsible for a clinical syndrome indistinguishable from that due to M. tuberculosis. It was first discovered in 1901 when Robert Koch observed that bacilli isolated from tuberculous lesions in humans differed from those in cattle.1 The subsequent description of M. bovis disease in a butcher gave origin to the concept of 'zoonotic tuberculosis'.1 Since then several other members of the MTBC have been shown to be zoonoses, including M. pinnipedii (seals), M. microti (rodents) and M. caprae (cattle).2 M. bovis is acquired by gastrointestinal, percutaneous or respiratory routes. Human-to-human spread and laboratory acquired infection have been reported.3 Currently, the incidence of M. bovis infection in Australia is low: only 1–2 cases have been notified per year since 2000.4 This case highlights the potential occupational hazard created by this pathogen and is followed by a review of the factors responsible for the declining frequency of this disease in Australia.

A 52-year-old male presented in February 2009 with a 1 month history of a non-productive cough, vague abdominal discomfort, night sweats and unexplained weight loss. He was born in Italy and migrated to Australia in 1998. He had worked as a butcher for the past 35 years. He denied working with diseased animals in Australia, but recalled slaughtering animals suspected to have bovine tuberculosis several decades ago. This process was often accompanied by dissection of the diseased lungs. He also drank unpasteurised dairy products whilst in Italy. He had a 30 year history of cigarette smoking, had no co-morbidities and took no medications. He had received the bacillus Calmette-Guérin (BCG) vaccination during childhood. His father had previously been treated for tuberculosis.

Physical examination revealed no significant abnormalities. A chest X-ray showed a well defined density in the left upper zone. A CT scan demonstrated several left upper lobe nodular densities up to 4 cm in diameter with some areas of cavitation (Figure 1). Bronchoalveolar lavage showed no acid fast bacilli on microscopy, but cultured slow-growing, cream coloured, cauliflower like colonies confirmed to be M. bovis by genotypic methods. The patient was successfully treated with a 9 month course of isoniazid, rifampicin and ethambutol. Contact tracing among close family members and work colleagues revealed no evidence of secondary cases. 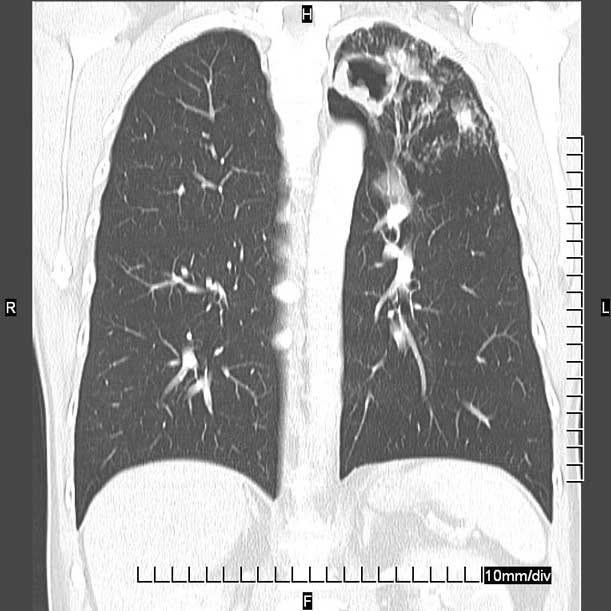 The inherent difficulties in culturing mycobacteria and failure to differentiate between the several species within the MTBC have limited our understanding of the incidence of M. bovis infection. Reports from England in the early 20th century attributed 5%–30% of all cases of tuberculosis to M. bovis.5 In this setting, it classically caused abdominal lymphadenitis in children following consumption of unpasteurised milk. The first report of human M. bovis disease in Australia, published in 1932, described high proportions of M. bovis in cervical (56%) and mesenteric (69%) tissue from children.6 Following the advent of pasteurisation in the 1950s, the incidence of M. bovis infection declined and the epidemiology shifted towards pulmonary disease in adults with occupational exposure to cattle, or in immigrants. In a study of 236 cases in Australia between 1970 and 1994, 70% were male, the median age was 51–60 years and 52% reported working in the meat or livestock industry.3

The threat of trade restrictions, loss of productivity, and to a lesser extent, the risk of human disease led to the development of the Brucellosis and Tuberculosis Eradication Campaign (BTEC) in 1970. Targeting reservoirs of disease in cattle, this program focussed on herd testing (by tuberculin skin testing), abattoir inspections, contact tracing, culling of diseased animals and changes in animal husbandry—at the expense of over $1 billion.7 Eradication was aided by the absence of feral maintenance host in Australia other than buffalo, which were included in the campaign from 1984. The impact of BTEC was dramatic, resulting in Australia being declared a free area with respect to bovine tuberculosis by 1997, using the criteria specified by the Office Internationale Epizooties.8 Currently the livestock industry remains in a surveillance phase, focussing on meat inspection and granuloma detection in suspect carcasses. The last case of M. bovis infection detected in cattle was in 2000, while the last case detected in buffalo was in 2002 in the Northern Territory.

The incidence of M. bovis disease in humans has paralleled that seen in cattle since the 1970s (Figure 2). Currently, M. bovis is responsible for 0.2% of all cases of human tuberculosis within Australia.4 Cases most frequently represent reactivation of latent disease, often acquired decades ago. Historically, employment in the livestock industry has been a risk factor.3 Pre-employment screening and/or BCG vaccination for abattoir workers has previously been advocated.9 Occasionally, iatrogenic disease due to live attenuated M. bovis (BCG strain) is seen following vaccination or intravesical therapy for bladder malignancy.10,11

(a) Detected during abattoir monitoring.

Global trends in the incidence of M. bovis in humans and animals differ between the developed and the developing world. Countries with the capacity to implement the same control measures as Australia have experienced steep reductions in M. bovis human disease. In the United States of America the proportion of tuberculosis due to M. bovis is 1.4% and in the United Kingdom <1%.13,14 Ongoing transmission between cattle and wild species (including the brushtail possum (Trichosurus vulpecula) in New Zealand)5 is thought to explain the significant proportion (2.7%) of disease due to M. bovis in New Zealand.15 By contrast, the proportion of human tuberculosis due to M. bovis in less developed countries such as Mexico (13.8%), Uganda (6.9%) and Nigeria (5%),16 probably reflects consumption of unpasteurised dairy products from diseased animals as well as closer contact with infected bovines. In this setting, the potential impact on human health and food supply recently prompted the World Health Organization to classify bovine tuberculosis a 'neglected zoonosis'.17

This case reminds us that, despite success in eradicating this zoonoses from our livestock, reactivation of latent disease and migration of populations will result in ongoing, infrequent M. bovis human disease in Australia. Vigilant surveillance and species level identification, applied to both sides of the animal-human interface, remain important control measures for this pathogen.

7. Radunz B. Surveillance and risk management during the latter stages of eradication: experiences from Australia. Vet Microbiol 2006;112(2–4):283–290.

17. World Health Organization. The Control of Neglected Zoonotic Diseases. WHO/SDE/FOS/2006.1. Report of a Joint WHO/DFID-AHP Meeting with the participation of FAO and OIE. Geneva, 20 and 21 September 2005. Available from: http://www.who.int/zoonoses/Report_Sept06.pdf