Professor John Tapsall AM, a highly regarded medical microbiologist, sadly passed away on 15 December 2010, after a two year illness. He was a pioneer in recognising the need for laboratory-based surveillance with other measures to monitor disease and its therapeutic treatment as a means of controlling and managing disease. His acheivements included the formation of the National Neisseria Network (NNN), Australia.

As the Director of the World Health Organization (WHO) Collaborating Centre for Sex­ually Transmitted Diseases (STD), Sydney, he coordinated the Gonococcal Antimicrobial Surveillance Programme (GASP) for the Western Pacific Region (WPR) and South East Asian Region (SEAR). His successful accomplishments with GASP in these regions led him, in 2009 and 2010, to work together with WHO towards a Global GASP.

In 2009 he was admitted as an Honorary Fellow of The Australasian Chapter of Sexual Health Medicine from The Royal Australasian College of Physicians. In recognition of John’s lifetime work he received the award of AM, Member in the General Division of the Order of Australia, in the 2010 Queen’s Birthday Honours, for service to medicine and to public health microbiology, particularly through contributions to the understanding and control of gonococcal and meningococcal disease. 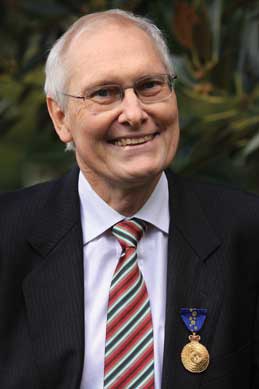 John graduated from the University of Queensland in 1969 and served as a resident medical officer and pathology registrar in Brisbane before undertaking his specialist training in microbiology. In 1973, he joined the Microbiology Department at the Prince of Wales Hospital in Sydney, where he progressed to senior staff specialist and also formed the Neisseria Reference Laboratory for New South Wales. In 1976, he attained his Fellowship with the Royal College of Pathologists of Australasia (RCPA), and served several terms on the executive and college committees, and for 18 years was the Director of the RCPA Quality Assurance Programmes. He was an active and enthusiastic examiner for the RCPA and during practical and viva voce examinations, John not only invigilated but taught, counselled and mentored.

Professor John Tapsall obtained his Doctorate of Medicine (MD) in 1991 from the University of New South Wales (UNSW) and, holding a conjoint academic position, was appointed Associate Professor in 1993. John’s MD thesis topic was diagnostic and public health microbiology, and its contribution to the control of infectious diseases. His studies included the Group B Streptococci and investigating the pathogenesis of streptococcal lung infections, and studies on diagnosis of lower urinary tract infections and the role of auxotrophic bacteria.

Surveillance and the control of antimicrobial resistance in sexually transmitted disease pathogens, most notably Neisseria gonorrhoeae, continued to be his major interest throughout his career. As Director of the NNN, he established the Australian Gonococcal Surveillance Programme in 1979 and the Australian Meningococcal Surveillance Programme in 1994. These national laboratory-based surveillance programs examine diagnostic methods, strain subtypes, antibiotic testing data, and more recently, molecular mechanisms of antimicrobial resistance in the pathogenic Neisseria. He introduced standardised methods and a quality assurance program and authored the numerous quarterly and annual reports published in Communicable Diseases Intelligence. These national reports have been used to signal and implement appropriate disease control interventions.

John was one of the core members of the Public Health Laboratory Network when it began in Australia in 1996. He was an enthusiastic member on STD issues and clinical and public health microbiology in general. As a result of his expertise, he was also a member of the Australian Government’s (National Health and Medical Research Council) Expert Advisory Group on Antimicrobial Resistance (EAGAR). John was an active member of EAGAR, as a member with the Australian Drug Evaluation Committee, strongly supporting better surveillance of antimicrobial resistance, plus comprehensive monitoring of antimicrobial use. John was also a member of the Australian and American Societies for Microbiology, acting as guest editor for the Australian Microbiologist for its (separate) issues on antimicrobial resistance and sexually transmitted diseases in 2008.

With the proven success of the NNN Programme in Australia, the WHO invited Professor John Tapsall to establish and co-ordinate a similar program for the WHO GASP WPR and SEAR. He was Director of the WHO Collaborating Centre for STD, in Sydney, and held this position for more than 15 years. Through this WHO GASP program, gonococcal antimicrobial resistance is monitored and currently involves over 20 countries from these regions. Prior to the existence of such a program, STD and antimicrobial resistance data were sporadic, unrepresentative and inaccurate. All laboratories in WHO GASP, including Australia, participate in an external quality assurance and control program to ensure the data reported are valid and comparable.

WHO GASP has achieved its goals through John’s commitment, support and his determination to see it succeed. He provided numerous consultancies to the WHO and headed the antimicrobial resistance surveillance unit in Geneva in 2003. In 2008, he travelled to Geneva for three months to prepare an international standards technical document for the global surveillance of gonococcal resistance, against a background of rapidly increasing antimicrobial resistance. John supported initiatives to strengthen surveillance work in other regions in order to enhance the WHO Global GASP network. In 2009 he was invited to the membership of the WHO Expert Advisory Panel on STDs, and despite his ill health he continued to fullfil this role.

Professor John Tapsall published extensively in peer-reviewed journals, mainly in the area of sexually transmitted infections, diagnostics and antimicrobial susceptibility monitoring, emphasising the pivotal role of these processes in disease control. He has presented his research, and advocated for disease control measures and rationales for antimicrobial use at national and international meetings of pathology, microbiology, antibiotic, sexually transmitted infection and pathogenic Neisseria societies. He founded the International Collaboration on Gonococci, which focuses on laboratory contributions to gonorrhoea control.

Professor John Tapsall was a quiet achiever with the extraordinary ability to remain clear-sighted and visionary in the projects he led. He advised with wisdom and kindness, and was always generous with his time and knowledge. He will be warmly remembered for his sense of humour and his chosen anecdotes. Many would remember and chuckle at his phrase ‘Sydney is like a lymph node in the groin of Asia’ when referring to resistant strains of Neisseria gonorrhoeae generally brought into Australia by sex tourists or others who had been sexually active overseas.

John had an infectious enthusiasm for test cricket, a love for travelling and an impressive knowledge of world history. He was motivated by a deep sense of social concern and enjoyed interactions with all staff. Professor John Tapsall was well respected and a mentor to many and strongly believed in the potential of individuals. Consequently, he contributed greatly to the education, encouragement and the professional development of scientists and pathologists.

Professor Tapsall was a devoted husband to Rosemary and a loving and dedicated father to their children, Philip and Jane.