In 2011, 29 institutions around Australia participated in the Australian Group on Antimicrobial Resistance (AGAR) period prevalence study of key resistances in Staphylococcus aureus associated with a range of clinical disease amongst hospital inpatients. Nationally, the proportion of S. aureus that were MRSA was 30.3% ranging from 19.9% in Western Australia to 36.8% in NSW/ACT. Regional variations in resistance was due to the differential distribution of MRSA clones between regions, particularly for the major HA-MRSA clone, ST239-III (Aus2/3 EMRSA) which is resistant to multiple non-β-lactam antimicrobials.

In 2011, the Australian Group on Antimicrobial Resistance (AGAR) conducted a period-prevalence survey of clinical Staphylococcus aureus isolated from hospital inpatients. Twenty-nine microbiology laboratories from all states and mainland territories participated. Specimens were collected more than 48 hours post-admission. Isolates were tested by Vitek2® antimicrobial susceptibility card (AST-P612 card). Nationally, the proportion of S. aureus that were methicillin-resistant S. aureus (MRSA) was 30.3%; ranging from 19.9% in Western Australia to 36.8% in New South Wales/Australian Capital Territory. Resistance to the non-ß-lactam antimicrobials was common except for rifampicin, fusidic acid, high-level mupirocin and daptomycin. No resistance was detected for vancomycin, teicoplanin or linezolid. Antibiotic resistance in methicillin susceptible S. aureus (MSSA) was rare apart from erythromycin (13.2%) and there was no resistance to vancomycin, teicoplanin or linezolid. Inducible clindamycin resistance was the norm for erythromycin resistant, clindamycin intermediate/susceptible S. aureus in Australia with 90.6% of MRSA and 83.1% of MSSA with this phenotype having a positive double disc diffusion test (D-test). The proportion of S. aureus characterised as being healthcare-associated MRSA (HA-MRSA) was 18.2%, ranging from 4.5% in Western Australia to 28.0% in New South Wales/Australian Capital Territory. Four HA-MRSA clones were characterised and 98.8% of HA-MRSA isolates were classified as either ST22-IV [2B] (EMRSA-15) or ST239-III [3A] (Aus-2/3 EMRSA). Multiclonal community-associated MRSA (CA-MRSA) accounted for 11.7% of all S. aureus. In Australia, regional variation in resistance is due to the differential distribution of MRSA clones between regions, particularly for the major HA-MRSA clone, ST239-III [3A] (Aus-2/3 EMRSA), which is resistant to multiple non-ß-lactam antimicrobials. Commun Dis Intell 2013;37(3):E210–E218.

Staphylococcus aureus is a major pathogen in the hospital environment, causing a wide variety of infections that are associated with considerable mortality. Several studies have indicated that mortality is higher for patients infected with methicillin-resistant S. aureus (MRSA) than methicillin-susceptible S. aureus (MSSA)1–4 and that MRSA infections are associated with increased costs due to longer hospital stays and the need for treatment with costly antimicrobials.5–7

The findings of the 2011 AGAR hospital inpatients survey are presented in this report.

From 1 July to 30 November 2011 each laboratory collected up to 100 consecutive S. aureus isolates from hospital inpatients (hospital stay greater than 48 hours at the time of specimen collection). Only 1 isolate per patient was tested. Each S. aureus isolate was judged to come from a potentially infected site. Each hospital laboratory only collected from one institution. The three private laboratories collected from the multiple institutions that they serviced.

All isolates were tested using the Vitek2® antimicrobial susceptibility card (AST-P612). All isolates with a penicillin minimum inhibitory concentration of ≤0.125 mg/L were screened for the presence of ß-lactamase using nitrocefin discs. To detect inducible clindamycin resistance a double disc diffusion test (D-test) was performed on all erythromycin resistant and clindamycin intermediate or susceptible S. aureus isolates. Clinical and Laboratory Standards Institute breakpoints10 were utilised for all antimicrobials excluding fusidic acid (http://www.eucast.org/clinical_breakpoints/). Isolates with an MIC in the intermediate resistance category have been called resistant in this report.

Of the 713 MRSA identified, 703 (98.6%) were referred to the Australian Collaborating Centre for Enterococcus and Staphylococcus Species (ACCESS) Typing and Research for epidemiological typing.

PCR for the detection of Panton–Valentine leucocidin (PVL) determinants was performed as previously described15 on all MRSA isolates.

MRSA clones were defined by the combination of the MLST and the SCCmec type.16 Clones were reported with their ST and SCCmec type followed by their colloquial name in parenthesis; e.g. ST22-IV [2B] (EMRSA-15). Clones were classified into 2 groups on the basis of previously published evidence; those implicated in healthcare-associated infection (HA-MRSA) and those implicated in community-associated infection (CA-MRSA).

Resistance to non-ß-lactams amongst MSSA was rare apart from resistance to erythromycin (13.2% nationally) (Table 6). Resistance was not detected for vancomycin, teicoplanin or linezolid. Resistance levels between regions varied significantly for penicillin and high-level mupirocin. South Australia had the highest rate of resistance for penicillin and Queensland/Northern Territory was highest for high-level mupirocin. Multi-resistance was uncommon in MSSA (36/1,644 2.2%).

Throughout Australia the percentage of S. aureus characterised as HA-MRSA was 18.2% ranging from 4.5% in Western Australia to 28.0% in the New South Wales/Australian Capital Territory region (Figure).

Figure: Percentage of Staphylococcus aureus characterised as HA-MRSA and CA-MRSA strains, by region 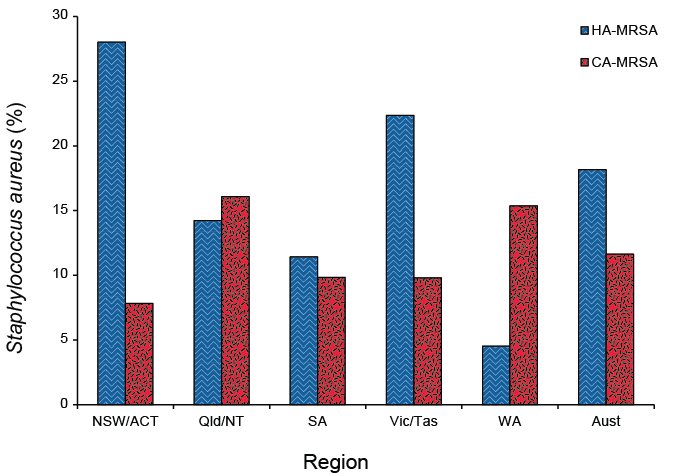 ST22-IV [2B] (EMRSA-15) has become the predominant HA-MRSA clone in Australia accounting for 30.2% of MRSA ranging from 15.6% in Queensland/Northern Territory to 40.2% in New South Wales/Australian Capital Territory (Table 7). ST22-IV [2B] are typically PVL negative, and 99% and 66% of these were resistant to ciprofloxacin and erythromycin respectively.

Throughout Australia the percentage of S. aureus characterised as CA-MRSA was 11.7% ranging from 7.8% in New South Wales/Australian Capital Territory to 16.1% in Queensland/Northern Territory. Thirty-two CA-MRSA clones were identified by pulsed field gel electrophoresis, corresponding to 25 MLST/SCCmec clones (Table 8). Overall, 79.6% of CA-MRSA were classified into 6 clones.

This survey demonstrates that MRSA remains a significant burden in Australian hospitals. For 2011, the national proportion of S. aureus that were MRSA was 30.3%, which was not significantly different to the proportions seen in past AGAR hospital inpatient surveys (X2 for trend 0.7527, P=0.3856).9 Differences between regions in the 2011 survey were significant with South Australia and Western Australia having a lower proportion than other regions. Although the proportion of MRSA amongst the different specimen types was similar, the high proportion of MRSA in invasive isolates is of concern as MRSA bacteraemia is associated with increased mortality compared with MSSA.1–4

More than 60% of the MRSA in the 2011 study were resistant to erythromycin and ciprofloxacin, and more than 30% were resistant to tetracycline, co-trimoxazole and gentamicin. Regional differences were again common due to different MRSA clones circulating in Australia. Erythromycin and ciprofloxacin resistance was more widespread in this survey with at least 30% of MRSA with this profile in any region. Erythromycin and ciprofloxacin resistance is common in ST239-III [3A] (Aus 2/3 EMRSA) isolates but is also characteristic of ST22-IV [2B] (EMRSA-15). ST22-IV [2B] (EMRSA-15) is a frequently isolated HA-MRSA in Australia and was found in all regions. Resistance was not detected for vancomycin, teicoplanin or linezolid. Compared with previous AGAR hospital inpatient surveys, the proportion of MRSA resistant to erythromycin, clindamycin, tetracycline, co-trimoxazole, ciprofloxacin, gentamicin and rifampicin has decreased nationally with significant decreases in New South Wales/Australian Capital Territory and Victoria/Tasmania. The proportion of S. aureus that are MRSA has remained stable in all regions and nationally. This finding is due to non-multi-resistant CA-MRSA increasing in Australian hospitals at the expense of the long-established multi-resistant ST239-III [3A].

Given that reports of outbreaks of CA-MRSA in Australian hospitals are thought to be rare17,18 it is likely that many infections in hospital inpatients are caused by the patients’ own colonising strains acquired prior to admission. Community clones such as PVL negative ST1-IV [2B] (WA1) and PVL positive ST93-IV [2B] (Qld CA-MRSA) are well established in Australia,19,20 and therefore it is important to monitor antimicrobial resistance patterns to MRSA over time as this information will guide therapeutic practices.

This study was primarily funded by a grant from the Australian Government Department of Health.