The Australian Meningococcal Surveillance Programme monitors anticrobial resistance in the treatments for meningococcal infection. This annual report describes the results for 2012 .

In 2012, there were 208 laboratory-confirmed cases of invasive meningococcal disease (IMD) analysed by the National Neisseria Network, and 222 cases notified to the National Notifiable Diseases Surveillance System, thus laboratory data were available for 93.7% of cases of IMD in Australia in 2012. Isolates of Neisseria meningitidis from 116 invasive cases of meningococcal disease were available for testing, and the phenotype (serogroup, serotype and serosubtype) and/or genotype, and antibiotic susceptibility were determined. Molecular typing was performed for the 92 cases confirmed by nucleic acid amplification testing (NAAT). Typing information was available for 194 of the 208 laboratory confirmed cases and 83% (161 cases) were serogroup B infections, 5.7% (11 cases) were serogroup C infections, 3.6% (11 cases) were serogroup W135, and 7.7% (15 cases) were serogroup Y meningococci. The number of laboratory confirmed IMD cases in 2012 was the lowest since laboratory surveillance data have been reported. Primary and secondary disease peaks were observed in those aged 4 years or less and in adolescents (15–19 years) and young adults (20–24 years), respectively. Serogroup B cases predominated in all age groups and jurisdictions. In 2012, the most common porA genotype circulating in Australia was P1.7-2,4. Serogroup C, W135 and Y cases were numerically low, similar to previous years. Decreased susceptibility to the penicillin group of antibiotics was observed in 81.9% of isolates, and 1 isolate exhibited resistance to penicillin. All isolates remained susceptible to ceftriaxone, ciprofloxacin and rifampicin. Commun Dis Intell 2013;37(3):E224–E232.

The National Neisseria Network (NNN) is a long-standing collaborative association for the laboratory surveillance of the pathogenic Neisseria species (N. meningitidis and N. gonorrhoeae). Since 1994 the NNN has operated through a network of reference laboratories in each state and territory to provide a national laboratory-based program for the examination of N. meningitidis from cases of invasive meningococcal disease (IMD).1 The NNN supplies data on the phenotype and/or the genotype of invasive meningococci, and their antibiotic susceptibility for the AMSP. The AMSP data supplement the clinical notification data from the National Notifiable Diseases Surveillance System (NNDSS). The NNN receives samples for analysis from about 90% of IMD cases notified to NNDSS.2 The AMSP annual reports are published in Communicable Diseases Intelligence.3

The characteristics of the meningococci responsible for IMD are important both for individual patient management, contact management, and to tailor the public health response for outbreaks or case clusters locally and nationally. The introduction of publicly funded conjugate serogroup C meningococcal vaccine onto the National Immunisation Program in 2003 (with a catch-up program for those aged 1–19 years that ran until May 2007) has seen a significant and sustained reduction in the number of cases of IMD evident after 2004.2 However, IMD remains an issue of public health concern in Australia. The success of any further vaccine initiatives in Australia is dependent upon detailed analysis of the N. meningitidis isolates circulating locally. This report provides relevant details of cases of IMD confirmed by laboratory testing in Australia in 2012.

Case confirmation was based upon isolation of, or positive nucleic acid amplification testing (NAAT) for, N. meningitidis from a normally sterile site and defined as IMD according to Public Health Laboratory Network criteria.4 Information regarding the site of infection, the age and sex of the patient, and the outcome of the infection (survived/died) was collated.

Cases were categorised on the basis of the site from which N. meningitidis was isolated or from which meningococcal DNA was detected. When N. meningitidis was grown from both blood and cerebrospinal fluid (CSF) cultures from the same patient, the case was classified as one of meningitis. It is recognised that the total number of IMD cases, and particularly the number of cases of meningitis, may be underestimated if a lumbar puncture was not performed or was delayed and the culture was sterile. However, the above approach has been used since the beginning of this program and is continued for comparative purposes. Where the diagnosis is made by serology, it is not possible to definitively classify a case as meningitis or septicaemia.

Phenotyping of invasive isolates of meningococci by serotyping and serosubtyping was based on the detection of outer membrane protein (porin) antigens using a standard set of monoclonal antibodies obtained from The Netherlands National Institute for Public Health. Genotyping of isolates and DNA extracts from NAAT diagnosis is performed by sequencing of products derived from amplification of the porin genes porA, porB and FetA.

Antibiotic susceptibility was assessed by determining the minimum inhibitory concentration (MIC) to antibiotics used for therapeutic and prophylactic purposes. This program uses the following parameters to define the various levels of penicillin susceptibility or resistance when determined by a standardised agar plate dilution technique.5

Laboratory diagnosis of suspected cases of IMD can be made serologically based on the demonstration of IgM antibody by enzyme immunoassay to N. meningitidis outer membrane protein using the methods and test criteria of the Health Protection Agency, United Kingdom, as assessed for Australian conditions.6–8

In 2012, there were 208 laboratory-confirmed cases of IMD analysed by the National Neisseria Network, and 222 cases notified to the NNDSS, thus laboratory data were available for 93.7% of cases of IMD in Australia in 2012 (Table 1). This was the lowest annual total of IMD cases recorded by the NNDSS and the AMSP since surveillance data was collated (Figure 1).

Figure 1: Number of invasive meningococcal disease cases reported to the NNDSS compared with laboratory confirmed data from the AMSP, Australia, 2012 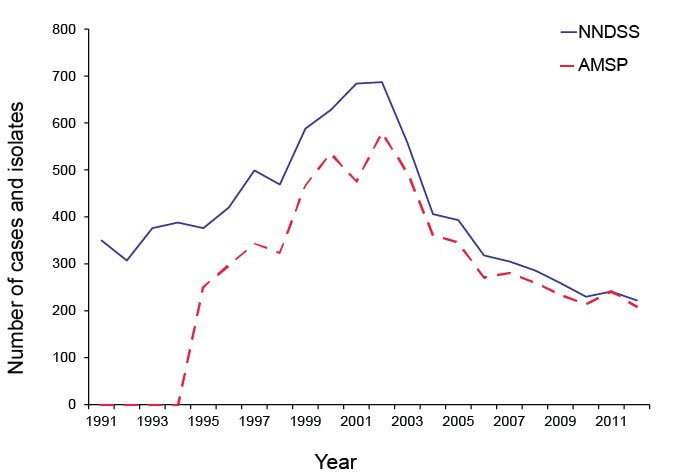 As in previous years, the peak incidence for IMD continues to be late winter and early spring (1 July to 30 September) (Table 2).

Figure 2: Number of serogroup B and C cases of confirmed invasive meningococcal disease, Australia, 2012, by age 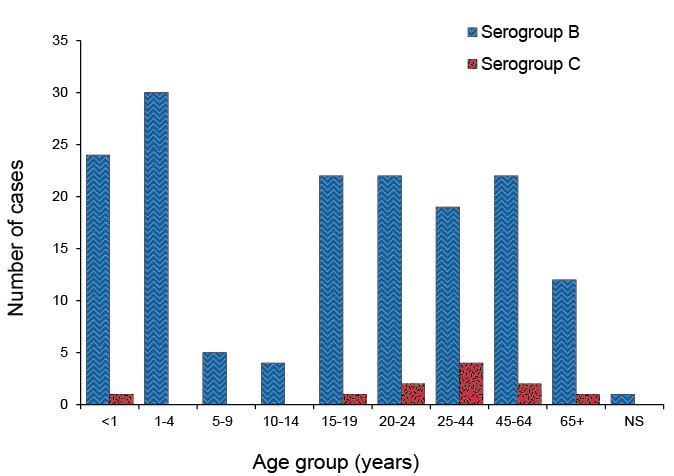 Serogroup B meningococci are typically of heterogeneous phenotypes. In 2012, the phenotypes of invasive isolates, based on a determination of their serogroup, serotype and serosubtype, were analysed for New South Wales (Table 4). Serogroup B meningococci are in general more difficult to characterise by serological methods and a number could not be phenotyped. All 35 New South Wales IMD isolates were phenotyped, the most common being B:4:P1.4 followed by B:15:P1.7.

Figure 3: Number of porA-genotypes* for serogroup B in cases of invasive meningococcal disease, Australia, 2012 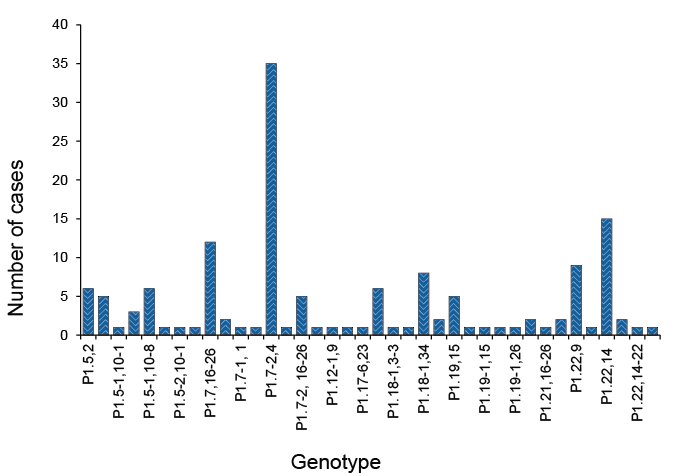 There were 69 diagnoses of meningitis based on cultures or NAAT examination of CSF either alone or with a positive blood sample. There were 133 diagnoses of septicaemia based on cultures or NAAT examination from blood samples alone (Table 8). There were no IMD cases diagnosed by serology in 2012. Sites other than blood, CSF or serum from which diagnoses were made were tissue (1 by polymerase chain reaction), and joint fluid (5 by culture).

The proportion of cases with serogroup B IMD cases is essentially the same as that reported between 2006 and 2011. The proportion of cases with serogroup C cases continues to be low across all age groups, following the decline as a result of the introduction of the serogroup C vaccine in 2003. As in previous years, there were only a small number of serogroup C cases in those aged 25 years or over, which may reflect the secondary benefit of herd immunity accruing to the wider community following vaccination of those age groups where disease was formerly highly concentrated.9 Low numbers of infections with serogroups Y and W135 is usual for Australia, however there was a proportional increase in serogroup Y disease in 2011 to 2012 compared with previous years. This will continue to be monitored to determine whether it is the beginning of an increasing trend.

As in previous years, phenotypic and genotypic data found no evidence of substantial numbers of cases of IMD caused by N. meningitidis that have undergone genetic recombination. There have been concerns that the emergence of new and invasive subtypes following extensive vaccine use would occur given the capacity for genetic reconfiguration within meningococci.9 Monitoring of meningococcal genotypes will continue as part of the NNN program.

The proportion of IMD isolates with penicillin MICs in the less sensitive category (0.06–0.5 mg/L) for 2012 was 82%. This was lower than that reported in 2011, but higher than in previous years indicating a continuing shift in penicillin MICs of IMD isolates from sensitive to less sensitive category. All isolates were susceptible to the third generation cephalosporins and ciprofloxacin. Strains with decreased susceptibility to quinolone antibiotics have been the subject of on-going international interest following their first description by the AMSP in 2000.10–13 There were 2 isolates with altered susceptibility to rifampicin from Queensland.

Participants in the 2012 AMSP to whom isolates and samples should be referred, and enquiries directed, are listed below.