The Influenza Complications Alert Network (FluCAN) is a hospital-based influenza surveillance program that operates in 15 hospitals nationally. In this report, we detail the epidemiology of patients with confirmed influenza, estimate vaccine coverage from test-negative controls and pre-season pneumonia cases, and estimate vaccine effectiveness against hospitalisation.

Influenza is mostly a mild, self-limiting infection and severe infection requiring hospitalisation is uncommon. Immunisation aims to reduce serious morbidity and mortality. The Influenza Complications Alert Network (FluCAN) is a sentinel hospital-based surveillance program that operates at 15 sites across all states and territories in Australia. This study reports on the epidemiology of hospitalisation with confirmed influenza, estimate vaccine coverage and influenza vaccine protection against hospitalisation with influenza during the 2012 influenza season. In this observational study, cases were defined as patients admitted to one of the sentinel hospitals with influenza confirmed by nucleic acid detection. Controls were patients who had acute respiratory illnesses who were test-negative for influenza. Vaccine effectiveness was estimated as 1 minus the odds ratio of vaccination in case patients compared with control patients, after adjusting for known confounders. During the period 9 April to 31 October 2012, 1,231 patients were admitted with confirmed influenza at the 15 FluCAN sentinel hospitals. Of these, 47% were more than 65 years of age, 8% were Indigenous Australians, 3% were pregnant and 76% had chronic co-morbidities. Influenza A was detected in 83% of patients. Vaccination coverage was calculated from the vaccination status of 1,216 test negative controls and was estimated at 77% in patients 65 years or over and 61% in patients with chronic comorbidities. Vaccination effectiveness was estimated at 41% (95% CI: 28%, 51%, P<0.001). Vaccine coverage was incomplete in at-risk groups, particularly non-elderly patients with medical comorbidities. The study results suggest that the seasonal influenza vaccine was moderately protective against hospitalisation with influenza during the 2012 season. Commun Dis Intell 2013;37(3):E246–E252.

Hospitalisation due to influenza is an uncommon complication, and the case hospitalisation ratio has been estimated in the United States of America at around 0.45%.1 However, because infection with influenza virus is relatively widespread and estimated to affect 5%–10% of the population, the incidence of hospitalisation is of significance to public health. Influenza vaccination is recommended in Australia for high risk groups, including the elderly, patients with chronic comorbidities, pregnant women and Indigenous Australians.2 The National Immunisation Program, funded by the Australian Government and implemented by state and territory departments of health, provides public funding for influenza immunisation to reduce serious morbidity and mortality from influenza. Hospital-based surveillance is able to detect a dimension of severity not captured in a timely manner by other surveillance systems for influenza and influenza-like illnesses. This study aimed to describe the epidemiology of hospitalisation with confirmed influenza, estimate vaccine coverage in hospitalised patients with acute respiratory illnesses but without influenza, and estimate influenza vaccine protection against hospitalisation with influenza during the 2012 influenza season.

An influenza case was defined as a patient admitted to hospital with influenza confirmed by polymerase chain reaction (PCR). Surveillance was conducted from 9 April to 31 October 2012. Test negative controls (up to two for each case) were the next tested patients with acute respiratory symptoms who were negative for influenza by PCR. Admission or transfer to the intensive care unit (ICU) included patients managed in a high dependency unit (HDU). The onset date was defined as the date of admission except for patients where date of test is more than 7 days after admission, where the onset date was the date of the test. Admissions that are listed as influenza A includes both untyped and seasonal strains, and may include infections involving the pandemic H1N1/09 strain if not specifically typed.

Vaccination coverage was estimated separately in two groups of patients. Prior to the onset of the influenza season (from study commencement on 9 April), vaccine status was collected in patients with radiologically-confirmed pneumonia. This was different by state/territory and was defined by National Notifiable Diseases Surveillance System data as follows: Australian Capital Territory (to 15 June), New South Wales (to 25 May), Northern Territory (not included, as influenza activity evident from 30 March), Queensland (22 June), South Australia (1 June), Tasmania (28 June), Victoria (8 June), and Western Australia (22 June). Subsequent to the commencement of the season, vaccine status was collected from patients admitted with influenza like illness but who were negative on influenza testing. Patients were defined as being vaccinated if they reported (as documented in the medical record or from self-report) receiving the 2012 trivalent seasonal vaccine more than 2 weeks prior to presentation. In Australia, only unadjuvanted vaccines are available under the National Immunisation Program although 1 adjuvanted vaccine is approved for use.

Vaccine effectiveness was estimated by comparing the odds of a confirmed case being vaccinated with the odds of a test negative control being vaccinated, assuming that vaccination would have no effect on admissions with non-influenza respiratory infections. This was calculated as 1 minus the odds ratio of vaccination using methods previously described.4 A multivariate model was constructed from factors known to be associated with vaccination, and therefore potential confounders. Where the vaccine is assumed to only partially protect vaccinated individuals, the odds ratio of vaccination in cases compared with controls can be shown to be arithmetically equivalent to the relative rate of disease in vaccinated vs. unvaccinated individuals, as long as the time at risk is the same.5–6 This has led to the development of the incidence density test design, where controls are selected from patients without influenza contemporaneous to a case.7 A convenience sample of controls can be obtained from patients tested for influenza but who are negative for influenza using a sensitive and specific assay; this assumes that influenza vaccination has no effect on the prevention of non-influenza influenza-like illnesses (i.e. those due to other respiratory viral infections), and that these patients are generally representative of the population at risk.

During the period 9 April to 31 October 2012, 1,231 patients were admitted with confirmed influenza at the 15 FluCAN sentinel hospitals. In most jurisdictions, the peak number of hospitalised cases occurred during July 2012 (Figure 1). The majority of cases were due to influenza A, with 213 (17%) due to influenza B. Influenza B was more common in patients admitted to Alice Springs Hospital in the Northern Territory, accounting for 59 of 83 (71%) admitted cases.

Figure 1: Date of admission in patients hospitalised with confirmed influenza 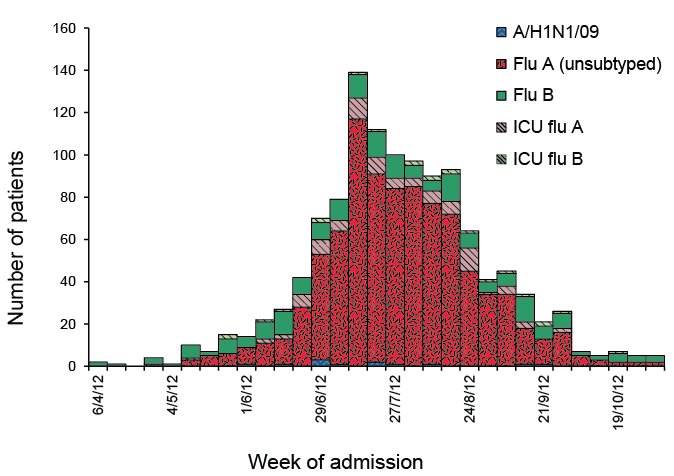 During the surveillance period, 1,694 control patients were enrolled; of which vaccination status was ascertained for 1,216 (72%). Based on the vaccination status of patients admitted with pneumonia prior to the commencement of the season, vaccination coverage was estimated at 71% in patients aged more than 65 years and 64% in patients with chronic comorbidities. In test negative controls during the season, vaccination coverage was estimated at 78% and 61% in the elderly and those with medical comorbidities respectively (Table 2).

Figure 2: Estimated vaccine effectiveness against hospitalisation in all patients, in specified subgroups and against infection with influenza subtypes 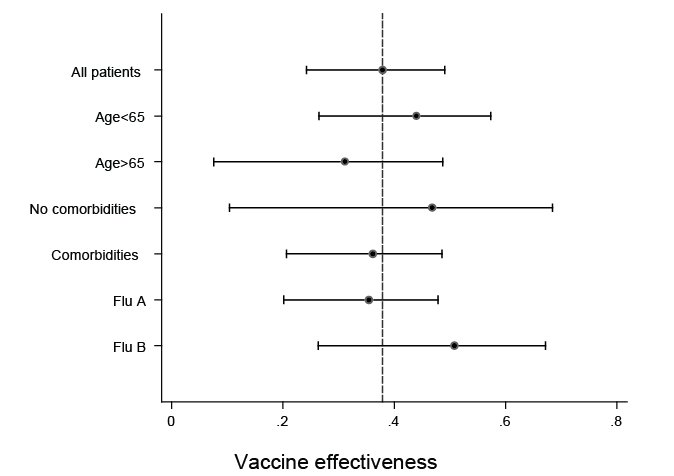 In 2012, FluCAN recorded more than 1,200 admissions to the 15 hospitals that participate in this surveillance network, in a year where the A/H3N2 strain predominated but the vaccine match to circulating strains was good.8 As the hospitals represented in this network represent approximately 12% of the national hospital bed capacity, the cases detected here are likely to reflect approximately 10,000 admissions nationally. It is difficult to compare this with previous years as a different number of hospitals participated in 2010 and 2011, but it was noted that the age of patients was older than in the H1N1/09 dominant seasons in 2010 and 2011, and case numbers were higher.9 It should be noted that the relative number of cases between jurisdictions does not reflect true influenza activity, due to differences in the number and size of sentinel hospitals in each jurisdiction.

The effectiveness of influenza vaccines in preventing influenza has most commonly been considered in the primary care setting. A systematic review which included studies where PCR confirmation was the outcome measure has suggested that vaccine effectiveness against influenza presenting to primary care was 59%.17 In that review, it was found that most randomised controlled trials enrolled healthy adults or children, but a smaller number of observational studies have specifically examined vaccine effectiveness in the elderly. Only 1 study was identified in this review that estimated vaccine effectiveness against hospitalisation,18 and we are aware of a few other studies published since.4,11,19,20 In general, results from these studies have been consistent and have shown that protection against hospitalisation ranges from 49%–61%.4,18,19 We note that estimated vaccine effectiveness was lower in patients with comorbidities and in the elderly but this difference was not statistically significant.

There are several limitations to this study. Despite the diagnosis of influenza having both infection control and therapeutic implications in hospital, it is likely that not all patients with influenza are diagnosed. Additionally, some patients with acute respiratory infections due to influenza may test negative due to delayed presentation or secondary bacterial pneumonia after clearance of the primary infection with influenza. There also may be unmeasured confounding of the association between vaccination and admission with influenza, a bias that has plagued studies of influenza mortality.21 In a sentinel surveillance system it is not possible to define the denominator population and therefore the true incidence of hospitalisation. Although previous studies have suggested that self-reported influenza vaccination status only slightly overestimates vaccination coverage, we have not validated this in our population.12,14,15 In particular, differential recall bias between cases and control patients may bias estimates of vaccine effectiveness. Finally, it is difficult to reconcile studies based on diagnosed influenza with those that indirectly estimate the burden of disease from excess seasonal hospitalisations or mortality.22

In summary, this study detected a large number of hospital admissions with confirmed influenza in a national observational study in 2012. Vaccine coverage was low in at-risk groups, particularly non-elderly patients with medical comorbidities. The results suggest that the seasonal influenza vaccine was moderately protective against hospitalisation with influenza.