The Australian Gonococcal Surveillance Programme monitors anticrobial resistance in the treatments for gonocococcal infections. This quarterly report describes the results for the third quarter of 2013.

The Australian National Neisseria Network reference laboratories in each State and Territory report data quarterly on sensitivity to an agreed group of antimicrobial agents, for the Australian Gonococcal Surveillance Programme (AGSP). The antibiotics routinely tested and reported are penicillin, ceftriaxone, ciprofloxacin and spectinomycin which are current or potential agents used for the treatment of gonorrhoea. Azithromycin testing is now performed by all states and territories as it has a role as part of a dual therapy regimen in the treatment of gonorrhoea. When in vitro resistance to a recommended agent is demonstrated in 5% or more of isolates from a general population, it is usual to remove that agent from the list of recommended treatments.1 Additional data are also provided on other antibiotics from time to time. These data are reported in the AGSP annual report. The AGSP has a program-specific quality assurance process. Because of the substantial geographic differences in susceptibility patterns in Australia, regional as well as aggregated data are presented. The AGSP data are presented quarterly in tabulated form, as well as in the AGSP annual report.

Quinolone resistant NG is defined as those isolates with a MIC to ciprofloxacin equal to or greater than 0.06 mg/L.

Azithromycin resistance is defined as a MIC to azithromycin equal to or greater than 1.0 mg/L. There were no isolates reported in Australia with high level resistance (HLR) with an azithromycin (MIC value >256 mg/L) in this quarter.

In response to concerns over the increasing proportions of NG strains with DS to ceftriaxone, dual therapy (ceftriaxone plus azithromycin) is recommended as a strategy to temper development of more widespread resistance.4 Patients with infections in extra genital sites, where the isolate has decreased susceptibility to ceftriaxone, are recommended to have a test of cure.4

Figure: Distribution of ceftriaxone MIC values in gonococcal isolates tested by the Australian Gonococcal Surveillance Programme, 1 January to 30 September 2011 to 2013 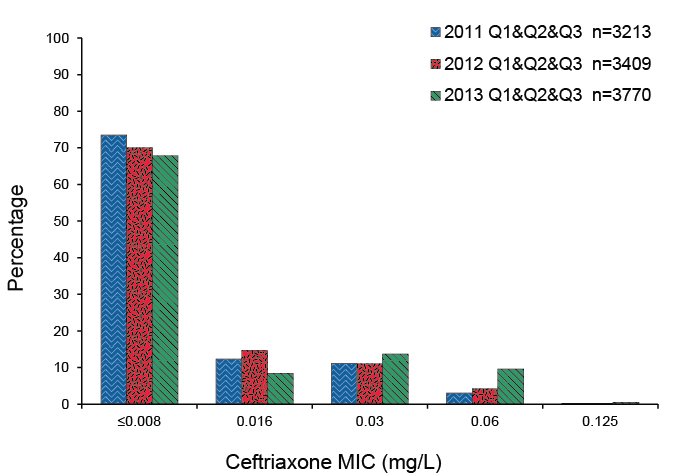