Objectives: To determine the effect of rotavirus vaccination on rotavirus hospitalisations in children under 5 years of age at The Canberra Hospital, Australian Capital Territory.

Methods: Rotavirus hospitalisations in children under 5 years of age at the Canberra Hospital were identified through a retrospective clinical audit of electronic medical hospitalisations in the pre-vaccine (2004–2006) and post-vaccine (2008–2012) periods. Records and confirmation with rotavirus pathology results were compared using MS Excel and Stata.

Rotavirus is the most common causative agent of severe acute gastroenteritis in childhood worldwide.1 Each year over half a million deaths occur globally due to rotavirus gastroenteritis, with the majority occurring in developing nations.1,2 While most infections in Australia do not result in death there is still substantial morbidity.2 Before the introduction of vaccination an estimated 10,000 hospitalisations, 22,000 emergency department visits and 115,000 general practitioner visits due to rotavirus occurred annually in children under 5 years of age.3 These amounted to a total estimated annual cost of 30 million dollars in Australia.3

In July 2007 rotavirus vaccination was introduced to the National Immunisation Program (NIP).4,5 Two oral, live-attenuated vaccines covering prevalent rotavirus genotypes were registered: Rotarix™ (GlaxoSmithKline) and RotaTeq™ (CSL Limited/Merck and Co inc).5 Rotarix™ is a monovalent (G1P1A[8] strain) vaccine strain given in 2 doses at 2 and 4 months, and has demonstrated effectiveness against a wide range of other strains.5 RotaTeq™ is a pentavalent vaccine containing reassortants of G1, G2, G3, G4 and P1A[8] human strains and bovine strains G6 and P7, and is given in 3 doses at 2, 4 and 6 months.5 Both vaccines have upper age limits: the Rotarix™ course must be completed by 25 weeks of age and RotaTeq™ by 33 weeks.5 The type of vaccine used in publicly funded programs varies by state, with Rotarix™ being used in the Australian Capital Territory.5 The Australian Capital Territory typically records some of the highest vaccination coverage rates in Australia.6 In the Australian Capital Territory in 2010, completed course coverage for rotavirus vaccine at 12 months of age was 88%.4

Several studies report significant declines in the burden of rotavirus gastroenteritis following the introduction of vaccination.7–11 Hospitalisations for rotavirus gastroenteritis at a tertiary paediatric centre in Westmead, Sydney decreased by 75% in the 2 seasons following vaccination.11 In South Australia, an 83% reduction in rotavirus gastroenteritis coded admissions was seen in a 2 year period following vaccine implementation.8 Similar declines in rotavirus hospitalisation were also observed at the Royal Children’s Hospital, Melbourne and in state-wide analysis of hospitalisations in Queensland.7,10 Analysis of pre– and post-vaccine periods, found a 71% decline in rotavirus-coded hospitalisations of children under 5 years of age in New South Wales, Victoria, Queensland, Western Australia, and South Australia.9 Studies have indicated that herd immunity was likely to have led to declines in rotavirus cases being seen in children who were ineligible for vaccination due to the upper age limits.7–11

Prior to the introduction of the vaccine implementation, clinical trials reported that 85%–100% of hospitalisations due to rotavirus gastroenteritis could be prevented in the 1st year following infant vaccination.12,13 The cost-effectiveness of vaccination relies on large declines in cases of rotavirus gastroenteritis, particularly in severe cases requiring hospitalisation.14,15 The current evidence confirms large decreases in morbidity associated with rotavirus infection. It is important to continue surveillance for rotavirus infection to monitor the epidemiology of infections and ensure that new strains do not emerge.

The aim of this study was to determine the effect of rotavirus vaccination on rotavirus gastroenteritis hospitalisations in children under 5 years of age at The Canberra Hospital (TCH), a major tertiary hospital servicing the Canberra region.

A retrospective clinical audit of electronic patient records and pathology data was conducted at TCH. Records were requested for hospital admissions occurring between January 2004 and December 2012 in children under 5 years of age that were coded as ‘rotavirus enteritis’, A08.0 according to the International Classification of Diseases, 10th Revision, Australian Modification (ICD-10-AM).

Simultaneously, the TCH pathology department was asked for the records of all children under 5 years of age who tested positive for rotavirus from 2004–2012. The following information for each patient with positive rotavirus pathology: patient name, hospital identification number, place of specimen collection, date of specimen collection and date of positive test result was requested.

From the TCH patient records, the following information: a unique patient identifier, hospital identification codes, gender, date of birth, date of onset of illness, date of admission, date of rotavirus detection, date of discharge, immunisation status and primary diagnosis at discharge was recorded. Length of stay and age at admission were calculated to compare pre– and post-vaccine periods. Patients admitted and discharged on the same day were allocated a length of stay of 1 day (http://meteor.aihw.gov.au/content/index.phtml/itemId/269422).

A rotavirus case-patient was defined as someone with both a hospital record coded for rotavirus and laboratory evidence of a positive test result. Only cases where the specimen collection data for a pathology result was between the date of admission and discharge was included, to ensure the positive result identified was related specifically to the rotavirus coded admission. Patients with multiple positive rotavirus pathology results corresponding to a single admission were counted only once.

As the Rotarix™ vaccine was introduced to the vaccine schedule in mid-2007 the pre-vaccine period was defined as 2004–2006 and the post-vaccine period as 2008–2012. The pre-vaccine period was used as a baseline for comparison of different characteristics of case patients, including: ages of patients, male to female ratio and days of hospitalisation. Means and medians for continuous data and used chi-squared tests for categorical data were compared. P<0.05 was considered as statistically significant. Trends in the number of hospitalisations for all children under 5 years, number of hospitalisations for specified age categories and seasonality of admissions were examined.

Two hundred and ninety-nine patient records with rotavirus coded admissions were received from the TCH medical records department. Following pathology data matching, 10 patients for whom there was no rotavirus positive pathology test associated with admission were excluded.

Figure 1: Rotavirus hospitalisations in children less than 5 years of age, Canberra Hospital, 2004 to 2012, by year 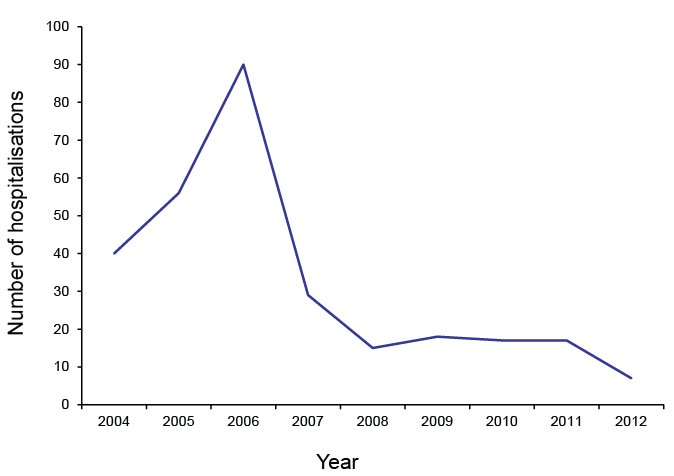 Figure 2: Length of stay for rotavirus hospitalisations in pre-vaccine (2004–2006) and post-vaccine (2008–2012) periods at the Canberra Hospital, Canberra 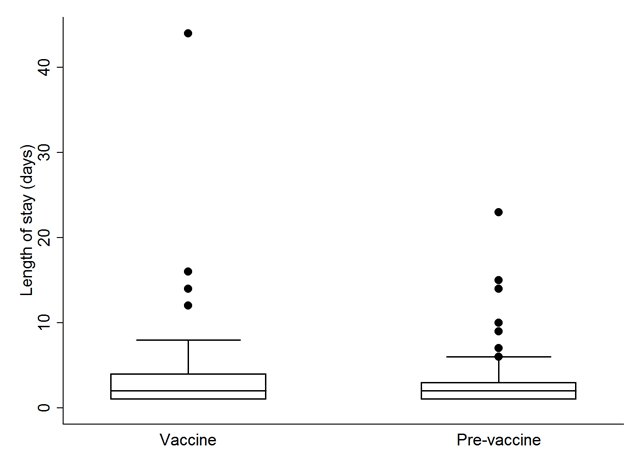 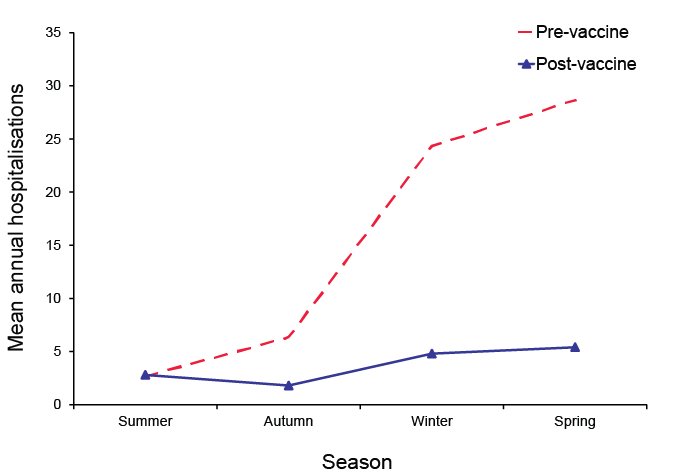 The mean age at admission pre-vaccine was 20.8 months. This was not found to be significantly different from the mean age post-vaccine of 19.7 months (P=0.87). In both periods, the highest proportion of hospitalisations occurred in children who were 12–23 months of age, with 42% and 35% in the pre– and post-vaccination periods respectively.

Figure 4: Mean number of hospitalisations for rotavirus pre-vaccine (2004–2006) and post-vaccine (2008–2012) periods, the Canberra Hospital, Canberra, by age at admission 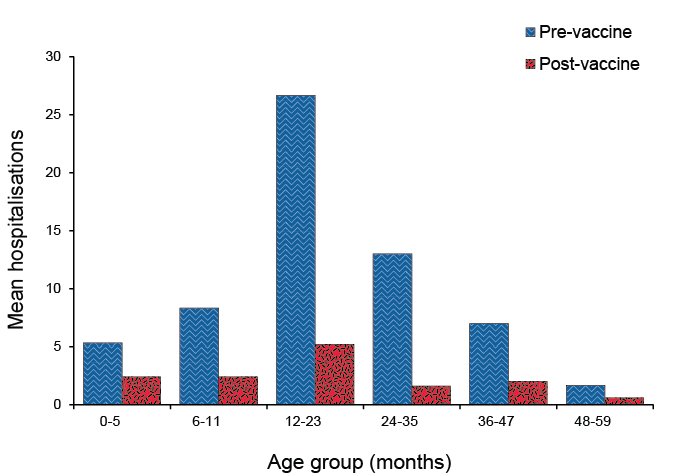 In this study examining the effect of rotavirus vaccination on rotavirus gastroenteritis hospitalisations in children in the Australian Capital Territory, a 76% reduction in rotavirus-coded hospitalisations was observed between pre-vaccine (2004–2006) and post-vaccine (2008–2012) periods at The Canberra Hospital. Despite natural fluctuations in disease activity, decreases were consistently above 71% throughout the 5 year period post-vaccination. The total number of days of hospitalisation declined significantly from 155 days pre-vaccine to 58 days post-vaccine. Decreases in the number of children hospitalisations in all age groups was observed, with the largest declines seen in the 12–23 and 24–35 month age categories. The declines observed were consistent with high rotavirus vaccine coverage in the Australian Capital Territory.

Prior to the addition of the rotavirus vaccine to the publicly funded NIP, detailed cost-effectiveness analysis was carried out.14,15 There were an estimated 10,000 rotavirus hospitalisations each year in Australia between July 1998 and June 2003, which represented a significant economic and social burden.3 Justification for funding the vaccine relied on significant declines in hospitalisations, contributing substantial healthcare savings. This study strengthens the existing evidence for the cost-effectiveness of rotavirus vaccination through large declines in rotavirus hospitalisation.

In this study, hospitalisations occurring in 2007 were analysed separately as vaccine was introduced mid-2007. A 53% decrease in hospitalisation between the pre-vaccine period and 2007 was observed, despite the likelihood that only a small proportion of children would have been immunised in that year. Vaccine was introduced mid-year and the upper age limits for Rotarix™ vaccine excluded most children. The proportion of children who received the vaccine in 2007 was unable to be determined.

A 65% reduction in the number of hospitalisations of children under 12 months of age for rotavirus was observed. This is important as rotavirus infection is more likely to be severe or complicated, requiring intensive treatment, in this younger age category. Closer examination of hospitalisations in the 24–35 and 36–47 month categories show declines in hospitalisation as early as 2007. These children were unlikely to have been eligible for vaccination in 2007, even accounting for early vaccine availability in the private market. These findings support the plausibility of rotavirus vaccination having an indirect protective effect for those not receiving vaccine.16 This effect was observed in several other states including Queensland, New South Wales, South Australia and Victoria and early evidence shows protection extending to individuals older than 5 years.7–11 The size of the indirect protective effect of vaccine was unable to be evaluated without accurate recording of rotavirus specific vaccination status on hospital records.

Prominent seasonal patterns of rotavirus admissions in the pre-vaccine period consistent with patterns previously documented in the Australian Capital Territory were observed.17 In the post-vaccine period, the seasonal pattern of hospitalisations was weakened, although spring–winter predominance was maintained. These findings are consistent with attenuated winter and spring hospitalisations observed in New South Wales post-vaccine.11 Alterations to patterns of seasonality may have important consequences for health service planning including resource allocation. Interestingly, no decrease in hospitalisations occurring in summer months post-vaccine compared with pre-vaccine were seen. It is possible that patient cases occurring in summer months are fundamentally different from those in the spring–winter months. Summer infection is perhaps occurring in individuals with impaired immunity or may be related to a strain that is not covered by the current vaccine.

Several recent Australian studies have reported decreased nosocomial transmission of rotavirus following vaccine introduction. The study aimed to determine whether a case was likely to be nosocomial using the primary and secondary diagnosis on the patient discharge summary. It was found that recording of primary and secondary diagnoses varied in accuracy, which prevented meaningful analysis of potential nosocomial transmission. In both pre– and post-vaccine periods there were a number of hospitalisations with long lengths of stay, which were potentially nosocomial, however, other cases with shorter lengths of stay could not be as easily identified.11

There may have been changes in the hospital catchment area or total numbers of children under 5 years being serviced by TCH during our study, although it is unlikely that this would have altered significantly from 2004 to 2012. Regardless, the large decline in hospitalisations at TCH still represents a significant economic and resource saving for the hospital. It was also unclear whether changes occurred in the testing patterns for rotavirus following presentation with diarrhoea. This may have changed the proportion of all rotavirus cases being coded as rotavirus between 2004 and 2012. It is likely that any background changes in testing would have had only small impacts on the declines observed.

This study has shown large decreases in rotavirus hospitalisation of children under 5 years of age at TCH following introduction of rotavirus vaccine. Evidence of an indirect protective effect of vaccine extending to those who did not receive vaccine cover was reported. The findings of this study support childhood vaccination as an effective strategy to reduce economic and social burden associated with rotavirus infection. Further research could include investigation of hospitalisation for acute gastroenteritis pre– and post-vaccine to further illustrate vaccine efficacy. It would be useful to investigate the effect of vaccine introduction on nosocomial transmission in the hospital setting. The emergence of new strains of rotavirus is an ongoing possibility and it is important to continue observing paediatric hospitalisations over longer periods of time.

We thank the Canberra Hospital medical records and pathology departments, in particular Gloria Spyropoulos and Nick Cockroft, for providing records for this study.