An outbreak of norovirus linked to oysters in Tasmania

This article describes the investigative methods and findings relating to an outbreak of gastroenteritis over Easter 2013 in Tasmania. The pathogen identified was norovirus and the vehicle oysters that had been harvested locally and distributed interstate.

Norovirus is the most commonly reported virus in shellfish related gastroenteritis outbreaks. In March 2013 an investigation was conducted following the receipt of reports of gastroenteritis after the consumption of oysters at private functions in Tasmania. Cases were ascertained through general practitioners, emergency departments, media releases and self-reporting. Of the 306 cases identified in Tasmania, ten faecal specimens were collected for laboratory testing and eight were positive for norovirus (GII.g). The most common symptoms were vomiting (87%), diarrhoea (85%), myalgia (82%) and fever (56%). The implicated oysters were traced to a single lease from which they were harvested and distributed locally and interstate. Nationally 525 cases were identified from Tasmania (306), Victoria (209), New South Wales (8) and Queensland (2). This report highlights the consequences of norovirus outbreaks in shellfish, even with rapid identification, trace back and removal of the implicated product from the market. Commun Dis Intell 2014;38(1)E16–E19.

On 31 March 2013, 2 clusters of acute gastroenteritis linked to separate private functions were reported to the Tasmanian Department of Health and Human Services (the Department) Public Health Hotline by a General Practitioner (GP) and a member of the public. Symptoms included vomiting and/or diarrhoea with onset approximately 24–30 hours after the functions. Both functions served oysters, which had been purchased from Company A on 28 March 2013. All cases reported oyster consumption. A Tasmanian outbreak investigation team was formed and an investigation initiated.

Case ascertainment was conducted through:

A questionnaire was developed and departmental staff interviewed all cases in Tasmania that self-reported. Ethics approval was not sought as data were collected as part of a routine public health investigation and response.

Cases from the initial 2 clusters were followed up and 10 faecal specimens from these cases were submitted to a local microbiology laboratory for bacterial culture, norovirus and parasitology testing.

Seven of these samples were referred to the University of New South Wales Molecular Virology Laboratory for further characterisation.

Trace back investigations were implemented. The oyster processing facility at Company A was inspected by the local environmental health officer (EHO) for possible post-harvest contamination. A sanitary survey of the harvest lease and surrounding area was conducted. This survey included inspection and testing of all sewage management infrastructure in the surrounding area, including inspection of possible waste dumping sites of caravans. Water samples from the lease were collected and tested for Escherichia coli.

Data on rainfall trends, tides and hydrology of the area surrounding the lease around the time the oysters were harvested were collected for hydrological assessment.

Seven samples of oyster meat were sent to the South Australian Research and Development Institute (SARDI) for viral testing for hepatitis A and norovirus. These samples were from uneaten product obtained from 3 separate cases, withdrawn product from Company A and oysters collected directly from the harvest lease.

Chief health officers were informed of the possibility of illness associated with Tasmanian oysters on 2 April. A national alert was circulated through OzFoodNet (Australian network for the surveillance of foodborne diseases) on 3 April. At an OzFoodNet teleconference on 4 April, a multi-jurisdictional outbreak was declared.

In the initial 2 clusters, all those who consumed oysters became ill (Table). These oysters were the only food common to both functions. Five additional clusters of illness were notified the following day. The attack rate of Company A oysters ranged from 86%–100% in groups reported over the course of the outbreak.

Tasmanian cases were defined as:

Confirmed case: A person who had been ill with vomiting and/or diarrhoea with onset on or after the 25 March who has reported eating Tasmanian oysters purchased from Company A between 24 and 31 March, and had a faecal specimen where norovirus has been detected.

Probable case: A person who had been ill with vomiting and/or diarrhoeas with onset on or after 25 March who has reported eating Tasmanian oysters purchased from Company A between 24 and 31 March.

Suspected case: A person who had been ill with vomiting and/or diarrhoea with onset on or after 25 March, who has been reported as eating oysters purchased from Company A between 24 and 31 March by a confirmed or probable case, but who was not contacted for interview to ascertain all details.

In Tasmania, there were 306 cases identified that met one of the case definitions. Interviews were conducted with 128 confirmed and probable cases who reported a further 178 suspected cases. The suspected cases were not followed further. It was felt that sufficient data had been collected to identify the source of illness and implement control measures. These cases are not included in the following descriptive epidemiological analysis.

Figure: Cases of gastrointestinal illness associated with Company A oyster consumption in Tasmania, 26 March to 5 April 2013, by onset date 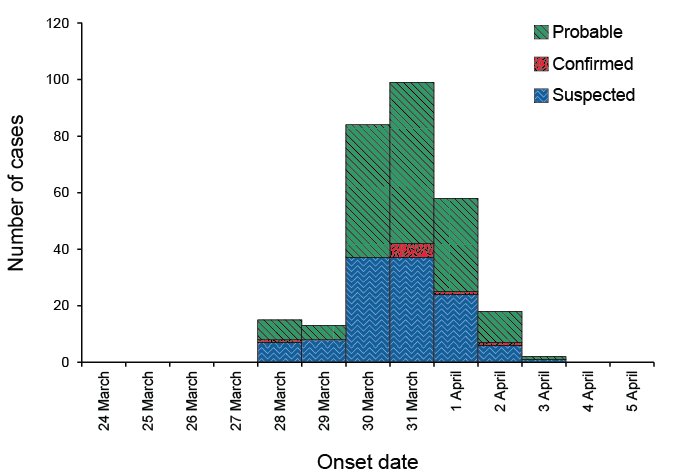 Information on the preparation of oysters consumed by cases was collected during interviews. The majority of cases (66%) ate raw oysters only, 13% of cases ate cooked oysters only, and 18% ate a combination of both. Respondents reported consuming oysters in quantities ranging from one to 36 before illness. The most frequently reported number of oysters eaten was six.

Of the 10 human samples sent for testing, 8 faecal specimens had norovirus detected and 1 sample also had Campylobacter detected. All 7 samples sent to the University of New South Wales Molecular Virology Laboratory had norovirus GII.1 detected with 2 representative samples further tested and identified as being a recombinant strain (GII.g).

The sanitary survey of the environment of the area surrounding the harvest lease of Company A, including fluorescein dye testing and visual inspection of waste water infrastructure, identified a private sewerage pipe that was leaking underwater. The sewerage lagoons and pump station were fully functional with no evidence of leakage or overflow. Water samples collected during the sanitary survey of the harvest lease all had E. coli levels <10 cfu/100 mL. No evidence of waste dumping by boats or caravans or post-harvest contamination was found.

Testing for norovirus in oyster meat samples by SARDI using the ISO/CEN standard method found trace levels of norovirus genogroup II (GII) RNA in two live un-shucked oysters from Company A using reverse transcription time polymerase chain reaction. The significance of this result is unknown as there is no threshold infectivity limit detectable by polymerase chain reaction and there was not enough RNA for sequencing to further characterise the virus to genotype level1. All tests were negative for hepatitis A.

The investigation of this outbreak was rapidly undertaken following the initial notification of the two clusters on 31 March 2013. Descriptive evidence suggested oysters were the source and given the timing of the outbreak at Easter, rapid action was necessary to prevent further cases. The harvest lease was closed by Company A on advice from the Tasmanian Shellfish Quality Assurance Program (TSQAP) and the product withdrawn from sale from Company A’s shop front the same day. This lease was identified as the only location this producer had harvested oysters sold during this period. Of 1,600 dozen oysters in the Tasmanian market, 600–700 dozen were withdrawn locally.

The damaged sewerage pipe was crimped and the leak stopped. The owners of the pipe were notified and served an abatement notice. A second oyster lease nearby was closed as a precaution. The harvest lease was re-opened on 3 January 2014, in line with TSQAP protocols.

More than 4,500 dozen oysters were distributed outside Tasmania. Authorities in Victoria, New South Wales and Queensland investigated local distribution and implemented withdrawal of Company A oysters. Withdrawal was difficult in some states due to mislabelling of oysters and the common practice of co-mingling product at the point of sale.

In total, 525 cases of illness associated with the consumption of Tasmanian oysters were identified in Australia, from Tasmania (306), Victoria (209), New South Wales (8) and Queensland (2), including 17 confirmed as norovirus. Of those in Victoria, 165 were linked with 4 point source outbreaks at large food premises and the remainder from retail outlets and smaller food outlets. Cases in New South Wales were associated with a single retail outlet and Queensland cases were linked to a restaurant, all supplied with Tasmanian oysters from the implicated harvest of Company A.

This outbreak progressed rapidly. Initial descriptive evidence included symptoms and incubation periods consistent with suspected norovirus infection (later confirmed with faecal specimen testing). Oysters from a common supplier were associated with initial clusters with high attack rates. The oysters from Company A were therefore withdrawn from sale as a precautionary measure. Although this action was taken within hours of the initial cluster being notified to the Department, there were more than 300 cases identified in Tasmania, and likely more that did not present to a medical practitioner or contact the Department.

Rapid identification of this outbreak and withdrawal of oysters may have prevented additional cases. However, the low infective dose of norovirus and high risk food, combined with a holiday traditionally associated with increased seafood consumption, still resulted in a large outbreak. Withdrawal or recall was made difficult by the rapid local and interstate distribution, rapid consumption of this product and a lack of labelling at the consumer level. This was further compounded in this outbreak by the common practice of co-mingling of oysters at retail outlets, and mislabelling of some oysters in the distribution chain.

Of the 306 cases in Tasmania, the number of samples available for testing was limited to 10, with 8 positive for norovirus (GII.g). While the number of specimens was small due to the timing of interviews and the short duration of symptoms, 6 positive specimens are sufficient to confirm the causative pathogen as norovirus in 97% of outbreaks, with any more than 7 samples not improving sensitivity.2

The detection and notification of this outbreak among smaller private groups by a local GP was critical to timely action and case ascertainment. This is uncommon in norovirus outbreaks where many cases do not present to health care services and are rarely investigated further when they do.3 Reported incidents are primarily associated with large functions, where outbreaks are more apparent and associations between exposure and illness more likely to be identified. This was demonstrated in Victoria with the majority of cases associated with large functions over the Easter weekend, though this may have been a result of distribution patterns of the oysters.

Cooking methods typically used to prepare oysters are not sufficient to inactivate enteric viruses present inside shellfish as a result of the faecal contamination of a growing area. However, they can inactivate virus as a result of surface contamination during processing or preparation.4 Past outbreaks of norovirus linked to cooked oysters support these findings.5

The TSQAP program follows the Australian guidelines for the monitoring of oyster growing areas, based on an internationally accepted model. It uses faecal coliforms as indicators of contamination.6 While faecal coliforms are used as an indicator of both bacterial and viral enteric pathogens, they have been found to be inadequate predictors of the presence of viral pathogens in shellfish.7–9 Currently, testing of oysters for norovirus is slow, expensive, has limited availability and poor sensitivity. It is not currently a viable method for ongoing monitoring considering the rapid harvest and consumption cycle of oysters.

Norovirus is the most commonly reported virus in shellfish related gastroenteritis outbreaks.9 This outbreak highlights the significant illness that can occur even with rapid identification and notification of shellfish associated norovirus outbreaks and the challenges in monitoring shellfish growing areas for viral pathogens.

We also thank Professor Peter White and his group from the School of Biotechnology and Biomolecular Sciences, University of New South Wales for genotyping of norovirus.