During the 2013 influenza season, 631 patients were admitted with confirmed influenza at the 14 FluCAN sentinel hospitals. We estimated that seasonal influenza vaccine reduced the risk of hospitalisation with influenza by 50%.

The National Influenza Program aims to reduce serious morbidity and mortality from influenza by providing public funding for vaccination to at-risk groups. The Influenza Complications Alert Network (FluCAN) is a sentinel hospital-based surveillance program that operates at 14 sites in all states and territories in Australia. This report summarises the epidemiology of hospitalisations with confirmed influenza, estimates vaccine coverage and influenza vaccine protection against hospitalisation with influenza during the 2013 influenza season. In this observational study, cases were defined as patients admitted to one of the sentinel hospitals, with influenza confirmed by nucleic acid testing. Controls were patients who had acute respiratory illnesses who were test-negative for influenza. Vaccine effectiveness was estimated as 1 minus the odds ratio of vaccination in case patients compared with control patients, after adjusting for known confounders. During the period 5 April to 31 October 2013, 631 patients were admitted with confirmed influenza at the 14 FluCAN sentinel hospitals. Of these, 31% were more than 65 years of age, 9.5% were Indigenous Australians, 4.3% were pregnant and 77% had chronic co-morbidities. Influenza B was detected in 30% of patients. Vaccination coverage was estimated at 81% in patients more than 65 years of age but only 49% in patients aged less than 65 years with chronic comorbidities. Vaccination effectiveness against hospitalisation with influenza was estimated at 50% (95% confidence interval: 33%, 63%, P<0.001). We detected a significant number of hospital admissions with confirmed influenza in a national observational study. Vaccine coverage was incomplete in at-risk groups, particularly non-elderly patients with medical comorbidities. Our results suggest that the seasonal influenza vaccine was moderately protective against hospitalisation with influenza in the 2013 season. Commun Dis Intell 2014;38(2):E143–E149.

Influenza vaccination is recommended in Australia for high risk groups, including the elderly, patients with chronic comorbidities, pregnant women and Indigenous Australians.1 The National Immunisation Program, which provides public funding for influenza and other vaccinations, aims to reduce serious morbidity and mortality from influenza. Clinical trials have shown that the influenza vaccine is moderately protective against influenza2 but fewer studies have examined its effectiveness in reducing serious complications, as the proportion of cases requiring hospitalisation is low. However, because infection with influenza virus is relatively widespread and estimated to affect 5%–10% of the population, the incidence of hospitalisation from influenza is of public health significance.

An influenza case was defined as a patient admitted to hospital with influenza confirmed by nucleic acid testing (NAT). Surveillance was conducted from 5 April to 31 October 2013. Test negative controls (one for each case where available) were the next tested patient with acute respiratory symptoms who was negative for influenza by NAT. Admission or transfer to intensive care unit (ICU) included patients managed in a high dependency unit. The onset date was defined as the date of admission except for patients where the date of the test was more than 7 days after admission, where the onset date was the date of the test. Admissions that are listed as influenza A include both untyped and seasonal strains, and may include infections involving the pandemic H1N1/09 strain if not specifically typed.

Estimation of vaccination coverage and effectiveness

Vaccination coverage was estimated from patients admitted with influenza-like illness but who were negative for influenza by NAT. Patients were defined as being vaccinated if they reported receiving the 2013 trivalent seasonal vaccine more than 2 weeks prior to presentation (as documented in the medical record or from self-report). In Australia, only unadjuvanted vaccines are available under the National Immunisation Program although 1 adjuvanted vaccine is approved for use. Nasally administered live attenuated and quadrivalent influenza vaccines are not available in Australia.

We used an incidence density test negative design to estimate vaccine effectiveness, where controls are selected from patients without influenza contemporaneous to a case.4–6 Vaccine effectiveness was estimated as 1 minus the odds ratio of vaccination in case patients compared with test negative control patients using methods previously described.7,8 A multi-variable model was constructed from factors known to be associated with both vaccination and risk of illness, and therefore were regarded as potential confounders.

Figure 1: Date of admission for patients hospitalised with confirmed influenza 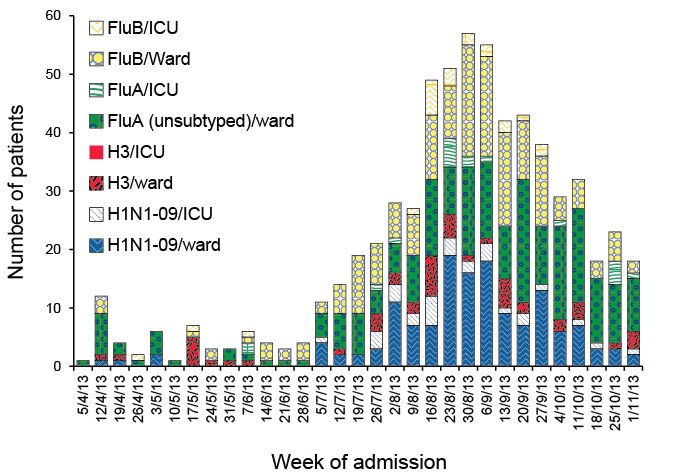 Of these 631 patients, 200 (32%) were more than 65 years of age, 60 (9.5%) were Indigenous Australians, 27 (4.3%) were pregnant and 488 (77%) had chronic co-morbidities (Table 1). Of the 514 patients (81%) of patients where influenza vaccination status was ascertained, 199 (31%) had been vaccinated. Factors associated with admission with confirmed influenza, compared with admission with non-influenza controls are detailed in Table 2. As there was no community-based control group, factors associated with hospital admission could not be quantified, but it was noted that 77% of patients had medical comorbidities. The most commonly reported co-morbidities were respiratory disease, cardiac disease, immunosuppression and diabetes.

Of the 621 patients where hospital mortality status was documented, 20 patients died, of which 10 patients died in intensive care. Ten (50%) of these patients were more than 65 years of age, 19 (95%) had medical comorbidities and 3 (15%) were Indigenous Australians. Significant medical comorbidities in patients who died following admission with confirmed influenza were recorded as chronic cardiac disease (n=10), chronic respiratory disease (n=9), immunosuppression (n=8), diabetes (n=4) and renal disease (n=3).

During this same period, 594 control patients were enrolled; vaccination status was ascertained in 450 (76%) control patients. In test negative controls during the season, vaccination coverage was estimated at 81% (178/221) and 66% (264/401) in the elderly and those with medical co-morbidities respectively (Table 2).

Figure 2: Estimated vaccine effectiveness against hospitalisation for all patients, in specified subgroups and against infection with influenza subtypes 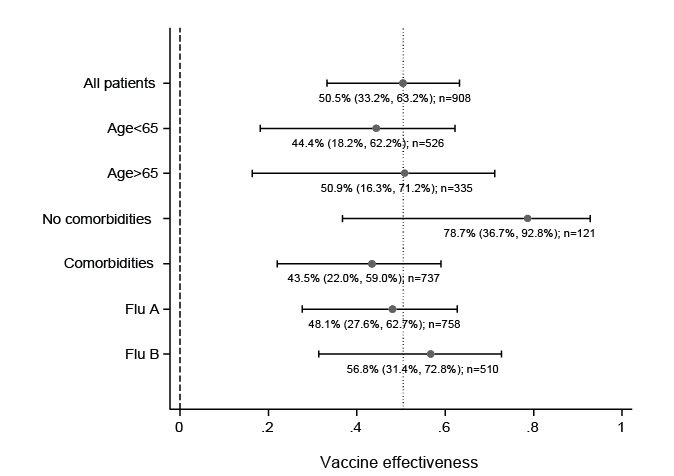 Numbers under bars represent point estimate (with 95% CI) and number of patients in analysis.

In 2013, we recorded more than 600 admissions to the 14 participating hospitals, representing half those detected in 2012. Virological surveillance of circulating strains suggested that all 3 lineages (A/H1N1/09, A/H3N2 and B/Yamagata-lineage) were detected in varying proportions in different states and territories, but vaccine match to circulating strains was good.9 As the hospitals represented in this network represent approximately 12% of the national hospital bed capacity, the cases detected here are likely to represent approximately 5,400 admissions nationally. Compared with 2012, the 2013 season was later (peaking in September in 2013, compared with July in 2012), younger age groups were represented in a higher proportion of patients (<65 years: 68% vs 53%), and a higher proportion were due to influenza B (30% vs 17%). There was a similar number of patients in the 40–65 year age group but a decrease in all other age groups. It should be noted that the relative number of cases between jurisdictions does not reflect true influenza activity, due to differences in the number and size of sentinel hospitals in each jurisdiction.

The test negative study design to estimate vaccine effectiveness is becoming increasingly accepted and is ideally suited to being incorporated into surveillance systems. Two recent papers have examined the validity of this design. Foppa et al found that the estimates would be robust to most assumptions, but bias may be introduced by differences in health care-seeking behaviour amongst cases and non-cases by vaccine status, strong viral interference, or modification of the probability of symptomatic illness by vaccine status.20 De Serres et al compared estimates from per protocol analyses of 4 randomised controlled trials of live attenuated influenza vaccine, with estimates based on the test negative design, and found minimal bias.21 However, these studies have primarily considered vaccine effectiveness in the primary care setting.

Several studies, many of them embedded in surveillance systems, are able to provide regular estimates of vaccine effectiveness against hospitalisation. We previously reported vaccine effectiveness of 37%–48% in the 2010 and 2011 seasons, and of 41% in the 2012 season.7,8 Estimates from other hospital-based studies have ranged widely from 30% to 71%, in part reflecting smaller sample sizes than in community-based studies.22–25 These results reinforce previous findings that vaccination coverage in non-elderly patients with comorbidities is relatively low. Further work is required to explore reasons for poor vaccination uptake, whether related to poor awareness in patients or healthcare providers.

There are several limitations to this study. Incomplete case ascertainment is likely due to the lack of use of influenza laboratory tests, despite the diagnosis of influenza having implications for infection control and antiviral use in hospitals. Delayed presentations or secondary bacterial pneumonia may be associated with false negative influenza tests as the influenza infection may be cleared at the time of presentation. There may also be unmeasured confounding of the association between vaccination and admission with influenza, a bias that has plagued studies of influenza mortality.26 Although previous studies have suggested that self-reported influenza vaccination status only slightly overestimates vaccination coverage, we have not validated this in our population.16–18

In summary, we detected a smaller number of hospital admissions with confirmed influenza in a national observational study in 2013 compared with 2012. Vaccine coverage was incomplete in at-risk groups, particularly non-elderly patients with medical comorbidities. Our results suggest that the 2013 seasonal influenza vaccine was moderately protective against hospitalisation with influenza.