In 2013, an outbreak of gastrointestinal illness was linked to a buffet lunch at a restaurant in Canberra, Australia. The results of the investigation suggest that a breakdown in cleanliness, temperature control and good food handling practices may have resulted in contamination of the buffet food.

In 2013, an outbreak of gastrointestinal illness occurred following a buffet lunch at a restaurant in Canberra. An investigation was conducted to identify the cause of illness and to implement appropriate public health measures to prevent further disease. We conducted a retrospective cohort study via telephone interviews, using a structured questionnaire developed from the restaurant buffet menu. A case was defined as someone who ate the buffet lunch at the restaurant on the implicated date and developed any symptoms of gastrointestinal illness (such as diarrhoea, abdominal pain and nausea) following the consumption of food. A total of 74% (225/303) of known attendees were interviewed, of whom 56% (125/225) had become ill. The median incubation period and duration of illness were 13 and 19 hours respectively. The most commonly reported symptoms were diarrhoea (94%, 118/125) and abdominal pain (82%, 103/125). A toxin-mediated gastrointestinal illness was suspected based on the incubation period, duration of illness and the symptoms. The environmental health investigation identified a lack of designated hand washing facilities in the kitchen, an absence of thermometers for measuring food temperatures and several maintenance and minor cleaning issues. A number of food samples were taken for microbiological analysis. Multivariable analysis showed that illness was significantly associated with consuming curried prawns (OR 18.4, 95% CI 8.6–39.3, P < 0.01) and Caesar salad (OR 3.6, 95% CI 1.8–7.5, P < 0.01). Enterotoxin-producing Staphylococcus aureus and Bacillus cereus were identified in leftover samples of cooked buffet food, but this food was not epidemiologically implicated. The investigation suggested that a breakdown in cleanliness, temperature control and food handling practices may have resulted in contamination of the buffet food. In order to prevent such outbreaks in the future, caterers and restaurateurs need to ensure they have the appropriate facilities and procedures in place if planning to cater for large groups. Commun Dis Intell 2014;38(4):E273–E278.

In 2010, 42% (64/154) of the outbreaks investigated by OzFoodNet, Australia’s enhanced foodborne disease surveillance network, were associated with restaurants and commercial caterers and affected over 880 people.1

Catering for large numbers of patrons can put additional pressure on food preparation systems, particularly if such functions are not a regular occurrence for a particular venue or caterer.2 A total of 17 outbreaks associated with buffet style meals have been investigated by OzFoodNet since 2000 (OzFoodNet Outbreak Register, August 2013, unpublished data).

Bacterial enterotoxins are known causes of foodborne illness in Australia and worldwide. Symptoms of toxin-mediated gastrointestinal illness include diarrhoea, abdominal pain and vomiting with severity, and incubation period (ranging from 30 minutes to 16 hours) depending on the amount of toxin ingested and individual susceptibility. The illness is self-limiting; cases will usually recover within 48 hours and death is rare.3–7

Under the right environmental conditions, such as inadequate cooking, reheating or storage of food, inadequate cooling and temperature abuse, certain bacteria can produce enterotoxins.4–7 Outbreaks due to bacterial enterotoxins are often underreported due the self-limiting nature of disease and people not seeking medical care or submitting stool samples.5,8

In 2013, the ACT Health Protection Service received complaints of gastrointestinal illness from 3 separate groups who attended the same restaurant for a buffet lunch on the same day in Canberra. Following an Acute Response Team meeting, an investigation was launched to identify the cause of illness and implement appropriate public health measures to prevent further cases.

Initial interviewing of complainants using a hypothesis generating questionnaire indicated that cases had attended the buffet lunch at a particular restaurant in Canberra on the same day.

We conducted a retrospective cohort study via telephone interview using a structured questionnaire developed from the restaurant buffet menu. The restaurant’s booking list and interviews of known attendees were used to identify restaurant patrons on the day of the outbreak. Ethics approval was not sought for this investigation as the data were collected for the purpose of public health surveillance under public health legislation.9

A case was defined as a person who ate the buffet lunch at the restaurant on the implicated date and developed any symptoms of gastrointestinal illness (such as diarrhoea, abdominal pain or nausea) following the consumption of food.

In univariable analysis, we compared food exposures among those who were ill with those who were not and generated crude risk ratios (RR), 95% confidence intervals (CI) and P values. We constructed an initial multivariable logistic regression model including food items with P values <0.1 in the univariable analysis, as well as age group, gender and seating location. The final model included statistically significant food items and gender, and generated adjusted odds ratios (OR), 95% CI and P values. A likelihood ratio test was conducted on the two models and Hosmer and Lemeshow test was carried out to test model fit.

Environmental health officers (EHO) from the ACT Health Protection Service visited the premises after the outbreak to review the kitchen facilities and preparation procedures. During the initial inspection, samples of leftover foods were taken for laboratory testing.

Stool samples from 2 ill attendees were examined for a range of foodborne pathogens by ACT Pathology at the Canberra Hospital. Standard bacterial cultures were set up to test for the presence of Salmonella, Campylobacter and Shigella. Antigen tests were conducted for rotavirus and norovirus, and direct microscopy was performed for parasites.

Food for the buffet lunch was served in 3 different locations and all received the same food from the same kitchen. No significant difference was observed in the seating location between those who were ill and those who were not (P > 0.5).

Ninety-four per cent (118/125) of those ill reported experiencing diarrhoea, of which 79% (93/118) experienced 3 or more episodes of diarrhoea in 24 hours, and 82% (103/125) of those ill reported abdominal pain (Table 1). The median incubation period was 13 hours (range 1–33 hours) and the median duration of illness was 19 hours (range 1–55 hours). The epidemic curve was indicative of a point source outbreak, with a short incubation period and tight clustering of cases over time (Figure). A toxin-mediated gastrointestinal illness was suspected based on the incubation period, duration of illness and symptoms. 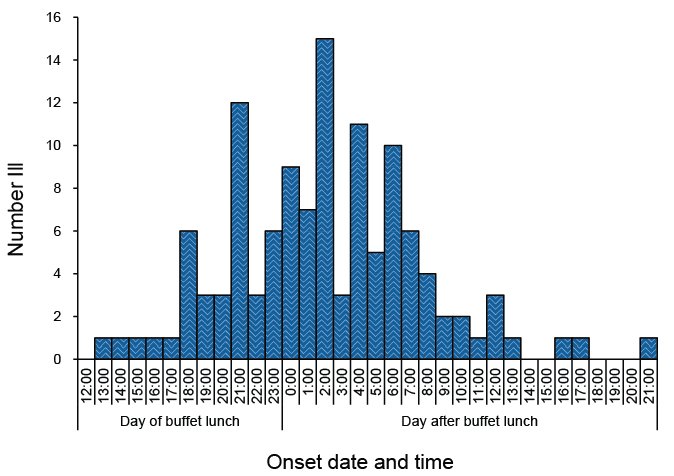 In the univariable analysis, multiple foods were found to be significantly associated with illness (Table 2). In the multivariable analysis, consuming curried prawns (OR 18.4, CI 8.6–39.3, P < 0.01) and Caesar salad (OR 3.6, CI 1.8–7.5, P < 0.01) were significantly associated with illness after adjusting for gender. When comparing gender and food consumption, ill males had higher odds (OR 1.9, CI 0.9–3.9, P 0.08) of having consumed the curried prawns and Caesar salad compared with ill females, although this was not statistically significant.

The likelihood ratio test (P < 0.05) and the Hosmer and Lemeshow test (P > 0.05) indicated that the final model fitted the data well.

The initial environmental health inspection of the premises found the need for kitchen repairs and cleaning of food preparation and non-preparation areas. Additionally, there was no dedicated sink for hand washing in the kitchen area and there was an absence of thermometers for measuring food temperatures. As a result of these findings, improvement notices were issued that required the repairs and cleaning to be carried out, along with staff training in food safety and the development of a food business management plan.

Details of the buffet food preparation and equipment used suggested evidence of temperature abuse through slow or inadequate cooling and prolonged food storage prior to service.

Initial laboratory testing of foods by ACTGAL detected S. aureus and B. cereus in samples of leftover cooked roast chicken, parboiled chat potatoes and raw bacon. Samples of the curried prawns and Caesar salad were not available for testing.

The 2 human stool samples were collected 1 and 4 days respectively after the buffet lunch. Both were negative for Salmonella, Campylobacter, Shigella, norovirus and rotavirus.

We report a large outbreak of gastrointestinal illness following a buffet lunch at a Canberra restaurant. The environmental health investigation found the need for repairs and cleaning at the restaurant. The results of the epidemiological investigation showed that illness was significantly associated with the consumption of curried prawns and Caesar salad from the buffet. Microbiological evidence of enterotoxin-producing B. cereus and S. aureus, 2 pathogens previously implicated in foodborne outbreaks with similar symptom and onset profiles,10,11 was found in leftover cooked food samples (cooked roast chicken and parboiled chat potatoes) of food served in the buffet. However, we were unable to definitively confirm the aetiological agent for this outbreak.

The results of the outbreak investigation suggest that food served at the buffet was responsible for the outbreak, and a breakdown in cleanliness, temperature control and food handling practices may have been contributing factors. The evidence for multiple food items from the buffet menu being contaminated with B. cereus and S. aureus suggests there was potential cross-contamination, adding to the evidence for a breakdown in food handling practices, with the resultant implications for human health.

Outbreaks involving buffet style meals have been investigated by OzFoodNet in the past.12–16 This investigation highlights the care needed when catering for large groups, particularly when such events may not be a regular occurrence for some caterers. Restaurants need to ensure they have adequate facilities and training to cater for the numbers at such functions, and that they are following their food business management plans and food safety procedures in order to limit the potential for such outbreaks to occur.

Whilst we were unable to contact and or interview all known attendees of the buffet lunch, approximately three-quarters of the known attendees were interviewed and we have achieved a representative cohort. There is a potential for selection bias due to our broad case definition, however, we are unlikely to have misclassification of those ill due to the rapid onset and severity of the gastrointestinal illness symptoms.

Measurement bias in our study was minimised using validated and standardised laboratory testing methods. Interviewer and recall bias were minimised by using a structured questionnaire developed around the set buffet lunch menu with prompts for all buffet food items. Potential confounders such as age and sex were controlled for in our regression analysis.

Another limitation of this study was the lack of samples (environmental/food/clinical) for laboratory testing. There were no leftovers of the epidemiologically implicated foods; only 2 stool samples were available for testing; and no environmental swabs were taken. As the stool samples were collected 1 and 4 days after the buffet lunch, it is possible that the enterotoxins may have been cleared by the individuals at the time of collection. Additionally, we were unable to test for the presence of BDE and SET in the stool samples using a validated method. These factors contributed towards not being able to definitively confirm the aetiological agent for this outbreak.

The incubation period, duration of illness and symptom profile were suggestive of a toxin-mediated illness in attendees following a buffet lunch at a Canberra restaurant, however, we were unable to definitively confirm the aetiological agent. The results of the investigation suggest that a breakdown in cleanliness, temperature control and good food handling practices may have resulted in contamination of the buffet food. In order to prevent such outbreaks in the future, caterers need to ensure staff are adequately trained and employing appropriate food preparation and handling practices to reduce potential risks when catering for large groups.

The MAE scholarships for Timothy Sloan-Gardner and Anna-Jane Glyn-Robinson are funded by the Australian Government Department of Health.

The authors acknowledge the following persons and organisations for their assistance with the investigation: Bridget O’Connor, Martyn Kirk and Emily Fearnley at the National Centre for Epidemiology and Population Health, Australian National University; Katrina Knope and Rhonda Owen at the Australian Government Department of Health; staff at the Communicable Disease Control section at the ACT Health Protection Service; environmental health officers at the ACT Health Protection Service; staff at the ACT Government Analytical Laboratory; Karina Kennedy and staff at ACT Pathology, The Canberra Hospital; and John Coventry and staff at the Microbiological Diagnostic Unit, Melbourne, Victoria.