Public health response to a measles outbreak in a large correctional facility, Queensland, 2013

This report documents the prompt, co-ordinated and effective public health response to a measles outbreak of 17 cases in Queensland in 2013 in a large, high-security, regional correctional facility, a setting with unique challenges. Recommendations are provided to reduce the likelihood and magnitude of measles outbreaks in correctional facilities.

This report documents the prompt, co-ordinated and effective public health response to a measles outbreak in Queensland in 2013. There were 17 cases in a large, high-security, regional correctional facility, a setting with unique challenges. Recommendations are provided to reduce the likelihood and magnitude of measles outbreaks in correctional facilities. Commun Dis Intell 2014;38(4):E294–E297.

The World Health Organization recently declared that Australia has been in a period of sustained measles elimination since at least 2009.1 However this does not mean an absence of cases; imported cases continue to occur in returned international travellers, and those exposed to them whilst infectious, leading to local outbreaks. By early October 2013, Queensland had experienced more year-to-date notifications (20) than the annual average of the previous 5 years (15), with an ongoing outbreak of 13 cases in South East Queensland.2 This report documents the public health response to an outbreak of measles in a correctional facility. Measles is a highly contagious disease transmitted by droplet and airborne routes.3 Correctional facilities present unique challenges for communicable disease control, for reasons including the close living conditions, and number and turnover of prisoners and staff.4

On 29 October 2013, the treating physician of a South East Queensland, high-security correctional facility (capacity approximately 1,000 males) notified the local public health unit (PHU) of 4 prisoners with fever and rash suspected to be measles.

Presentations were atypical. One case had a rash starting in the left thoracic area. Another had a protracted flu-like illness with severe cough for 7 days and a rash that started on an elbow before progressing to the rest of the body. The third had diffuse spots with maculopapular rash starting the same day as high fever. The fourth had a flu-like illness for 2 days with a transient ‘spotty’ rash on the chest. The following day, a 5th prisoner was notified with a classical measles rash. Measles virus was detected by polymerase chain reaction (PCR) testing of upper respiratory tract swabs from each case.

Review of case notes for prisoners with recent rash and fever was undertaken to identify the primary case. Approximately 2 weeks previously, a prisoner was diagnosed with a drug rash from antibiotics administered for a respiratory tract infection. Following look-back, measles virus was detected by PCR in a sample taken from the prisoner. Airborne transmission of the virus is possible and this case had moved widely in the correctional facility, sharing facilities with each of the 5 cases and others during the infectious period. The exposure period, movements and genotype (G3) suggest the prisoner acquired the infection from a community outbreak2 before entering the correctional facility.

Overall, 17 cases were linked to the outbreak (Table). Cases were laboratory confirmed by PCR, with the exception of 1 confirmed by measles-specific immunoglobulin M in serum. Exposure and infectious periods suggest the correctional facility’s primary case infected 8 cases who in turn infected 7 cases (Figure). Vaccine-strain virus was detected in 1 further case who was vaccinated in the mass vaccination program. One staff case produced documentation of 1 previous dose of measles vaccine. Prisoners’ vaccination histories were not available. 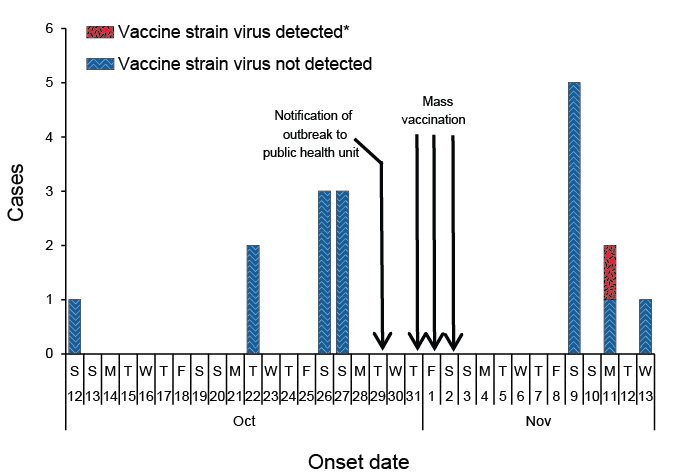 * This result does not preclude infection with wild-type virus.

The outbreak was declared over when 36 days (2 maximum expected incubation periods) since the last case’s infectious period had passed without a new, epidemiologically-linked case.

As this response and release of data are provided for under the Public Health Act 2005,5 human research ethics committee approval was not required.

On 29 October 2013, suspected cases of measles were isolated, advice was provided to staff and staff and prisoner movements were restricted. On 30 October following laboratory confirmation, an outbreak control team (OCT) of staff from the state justice department including the correctional facility, state department of health, public health laboratory, local PHU, hospital pharmacy and other hospital and health service (HHS) teams, was assembled.

As prisoners and visitors shared air space via grilles in visitation stalls, prisoner visits were cancelled on 1 November. No admissions of new prisoners were accepted. Prisoners recently transferred out were monitored for symptoms at receiving facilities. Transfers of non-immune prisoners were suspended state-wide.

With around 900 prisoners and 450 staff potentially exposed, individual contact tracing and immune status determination were not considered feasible or sufficiently timely. Consistent with public health recommendations for the management of measles outbreaks in large institutions,6,7 a mass vaccination approach was adopted.

The department of health procured sufficient vaccine (M-M-R© II, bioCSL/Merck) within 24 hours of planning the activity. The HHS mobilised nurses to vaccinate alongside correctional facility staff, and provided consumables. Pre-vaccination assessment, informed consent, standing orders8 and adverse event procedures, documents and other resources were developed. The standing orders enabled the measles vaccine administration without a prescription for each prisoner. Key messages regarding measles’ infectiousness, complications, prevention and control were disseminated to prisoners, staff, visitors and the general public. State health hotline staff were briefed and the service publicised for enquiries.

On 31 October, approximately 80 staff were vaccinated. Over the next 2 days, approximately 1,150 vaccinations of staff and inmates were administered. In the following week, correctional facility staff conducted mop-up vaccinations, and movement and visitor restrictions were gradually lifted. All were vaccinated except 1 prisoner and 3 staff who refused. These were isolated or excluded from work until the maximum expected incubation period (18 days) had elapsed without symptom onset.

Measles in institutional settings can result in explosive outbreaks with large numbers of cases, and difficulties in containing successive waves of infection. The response to this correctional facility measles outbreak was rapid and highly co-ordinated, limiting further cases.

The clinical suspicion of measles in the first 4 identified but atypical cases was crucial to the immediate diagnostic testing and implementation of control activities. It is known that a proportion of all measles cases will not present with classic symptoms—the reason for the clustering of unusual presentations in this outbreak is unknown.

Swift commencement of mass vaccination meant most prisoners and staff received a vaccine within 3 days of the outbreak identification.

The early assembly and central co-ordination of an OCT of key stakeholders and experts meant that those best placed to provide expertise contributed to decision-making and facilitated speedy deployment of interventions.

No subsequent community cases were epidemiologically linked to this outbreak. Most cases with onset after the mass vaccination were most likely already incubating the disease.

Timely and appropriate communication ensured that the situation and associated risks were well communicated. Surveillance for cases and movement restrictions within the correctional facility allowed rapid responses when new cases were identified. Safety, security and order were maintained.

There were challenges. A higher clinical suspicion of measles in the primary case, given the local outbreak,2 may have enabled better containment.

Correctional facilities are advised to isolate prisoners with infectious diseases to minimise transmission, where appropriate.9 Specific guidance for measles outbreak management in correctional facilities is however, absent from national7 and state6 health and correctional guidelines,9 leading to some dependence on expert advice regarding interpretation and implementation of generic guidelines for this setting. As with most measles responses, success came from relying on first principles: timely contact immunisation, case isolation and limiting the movements of exposed individuals.

There are no specific measles immunity data available for Queensland prisoners. However, they are more likely than the general adult population to be born since 1966, thus less likely to have pre-existing natural immunity.10–12 Additionally, 14% of prison entrants in New South Wales in 2010 who were born since 1969 and tested, were susceptible to measles, compared with 8%–9% of the general population of similar age.13,14 For a highly contagious virus like measles in a confined institutional setting, this represents a high risk of serial waves of transmission if initial cases are not promptly recognised, and the outbreak response is not swift and comprehensive.

Although measles vaccine is funded in Queensland,15 it is not routinely offered to prisoners, nor is there screening for measles immunity on prison entry. Immunity and vaccination records were also not readily available during this outbreak, preventing rapid identification of susceptible prisoners.

The setting presented logistical difficulties. Floor plans were unavailable to the OCT for security reasons, preventing the usual outbreak mapping of case movements. It was not feasible for public health staff to directly interview cases. Standard immunisation procedures needed to be modified to maintain correctional facility security and staff safety.

To reduce the likelihood of outbreaks in correctional facilities and improve public health responses, it is recommended that:

The authors acknowledge all who contributed to this response.