The Australian Mycobacterium Reference Laboratory Network collects and analyses laboratory data on new cases of disease caused by the Mycobacterium tuberculosis complex. In 2011, a total of 1,057 cases were identified bacteriologically; an annual reporting rate of 4.6 cases per 100,000 population. Eighteen children aged less than 15 years plus an additional 11 children from the Torres Strait Protected Zone had bacteriologically-confirmed tuberculosis. Results of in vitro drug susceptibility testing were available for 1,056 isolates for isoniazid, rifampicin, ethambutol, and pyrazinamide. A total of 107 (10.0%) isolates of M. tuberculosis were resistant to at least one of these anti-tuberculosis agents. Resistance to at least isoniazid and rifampicin (defined as multi-drug resistance, MDR) was detected in 25 (2.4%) isolates; 18 were from the respiratory tract (sputum n=14, bronchoscopy n=3, tissue n=1). Ten (55.6%) of the MDR-TB-positive sputum specimens were smear-positive, as was a single sample from a lymph node. Ten patients with MDR-TB were Papua New Guinea (PNG) nationals in the Torres Strait Protected Zone. If these PNG nationals are excluded from the analysis, the underlying MDR-TB rate in Australia was 1.4%. No cases of extensively drug-resistant TB (defined as MDR-TB with additional resistance to a fluoroquinolone and an injectable agent) were detected in 2011. Commun Dis Intell 2014;38(4):E369–E375.

In the 2012 Global Tuberculosis Report, The World Health Organization (WHO), declared that the 2015 Millennium Development goal of halting and reversing tuberculosis (TB) incidence had been achieved with global TB incidence falling for several years and declining at a rate of 2.2% in 2010 and 2011.1 However, in 2011, there were still an estimated 8.7 million cases of TB globally, of which 5.8 million (67%) were notified to national TB control programs. India and China account for almost 40% of the global burden. By WHO region, South East Asia and the Western Pacific regions combined account for almost 60% of the cases globally.

Australia continues to record one of the lowest notification rates (5–6 cases per 100,000 population) of TB in the world. For non-Indigenous persons born in Australia, the notification rate was around 0.7 per 100,000 population.2,3 In recent years, more than 85% of notified cases occurred in the overseas-born population with international students representing almost 20% of all overseas-born cases notified in 2011.4 The current epidemiology of TB in Australia is largely a direct effect of past residence in a high burden TB country.

Since 1991, the National Notifiable Diseases Surveillance System (NNDSS) has provided data on TB notifications reported to public health authorities in Australia’s states and territories. The Australian Tuberculosis Reporting Scheme has been conducted by the Australian Mycobacterium Reference Laboratory Network (AMRLN) since 1986. Data compiled by the AMRLN relate to cases of bacteriologically-confirmed tuberculosis whereas NNDSS data also includes cases identified on the basis of clinical and epidemiological information, or on non-bacteriological laboratory investigations. This report describes the bacteriologically-confirmed TB diagnoses for the year 2011. This report should be considered in conjunction with the National TB Advisory Committee (NTAC) TB notification report.4

The data were based on clinical specimens that were culture-positive for Mycobacterium tuberculosis complex (MTBC). Almost all isolates of MTBC were referred to one of the five laboratories comprising the AMRLN for species identification and drug susceptibility testing. Comparable methodologies were used in the reference laboratories. Relapse cases, as defined by the National Strategic Plan for TB Control in Australia Beyond 2000 prepared by the NTAC,5 were included in the laboratory data as laboratories are generally unable to differentiate relapse or failed cases from new cases. Data include temporary visitors to Australia, asylum seekers or overseas persons detained in Australia in correctional service facilities. For each new bacteriologically-confirmed case, the following information was collected where available: demography: patient identifier, age, sex, HIV status and state of residence; specimen: type, site of collection, date of collection and microscopy result; isolate: Mycobacterium species and results of drug susceptibility testing, nucleic acid amplification testing results; and for drug resistant isolates: patient country of origin, and history of previous TB treatment, to determine whether resistance was initial or acquired. Data from contributing laboratories were submitted in standard format to the AMRLN coordinator for collation and analysis. Duplicate entries (indicated by identical patient identifier and date of birth) were deleted prior to analysis. Where more than one jurisdiction reported data for the same patient, the earlier collection date was used for including the result. Rates were calculated using mid-year estimates of the population for 2011 supplied by the Australian Bureau of Statistics.6 For each case, the nature of the first clinical specimen that yielded an isolate of MTBC was used to record the nominal site of disease. Culture-positive specimens collected at bronchoscopy or by gastric lavage were counted as pulmonary disease. Patients with isolates recovered from multiple sites were counted as pulmonary disease (the most important category for public health purposes) if a sputum, bronchoscopy, or lung biopsy specimen was culture positive. Drug resistance among new cases (proxy for primary resistance) was defined as the presence of resistant isolates of M. tuberculosis in patients who, in response to direct questioning, denied having received any prior anti-TB treatment (for more than 1 month) and, in countries where adequate documentation was available, for whom there was no evidence of such a history.7 Drug resistance among previously treated cases (proxy for acquired resistance) was defined as the presence of resistant isolates of M. tuberculosis in cases who, in response to direct questioning, report having been treated for 1 month or more or, in countries where adequate documentation was available, for whom there was evidence of such a history.7 For 2009 onwards, the AMRLN has been requested by NTAC to provide laboratory data on bacteriologically confirmed isolation of M. bovis (bacille Calmette Guérin) (BCG).

Figure 1: Comparison between tuberculosis notifications and laboratory data, Australia, 1990 to 2011 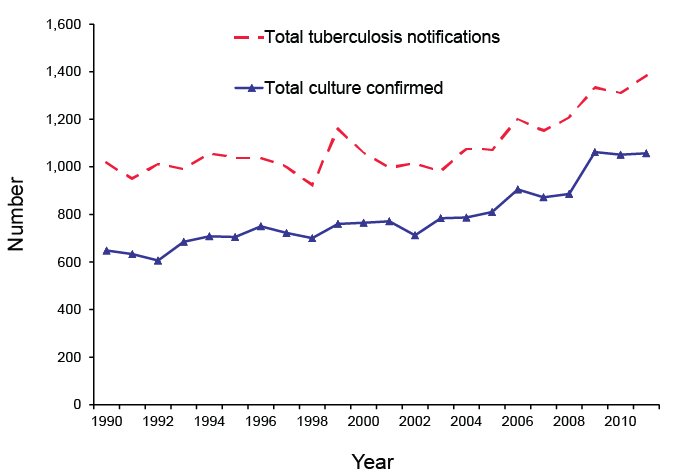 Almost all isolates were identified as M. tuberculosis (n=1053), the remaining isolates being M. bovis (n=2), M. africanum (n=1), and M. orygis (formerly known as the ‘Oryx’ bacillus; (n=1). In addition, a total of 24 M. bovis (BCG) were isolated from clinical samples.

Distribution by sex, age and site of disease

The site of disease was dependent upon age and sex. Complete information for sex and age was available for 1,055 patients; 455 (43.1%) were from females, 600 (56.9%) were from males, and sex was not recorded for 2 cases. The overall M:F ratio was 1.3:1. For respiratory isolates, the M:F ratio was 1.5:1. For TB lymphadenitis, the M:F ratio was 1.1:1. For males, there were 2 distinct peak age groups in bacteriologically-confirmed rates: 13.5 cases of TB per 100,000 population at 25–29 years and a 2nd peak in elderly males aged more than 84 years (more than 11.5 cases of TB per 100,000 population). The age distribution of female cases was similar, with 11.6 bacteriologically-confirmed TB cases per 100,000 population for the 25–29 year age group and a lower rate of 4.6 for women more than 84 years of age. The predominant culture-positive respiratory specimen was sputum (n=497), a further 148 were obtained from bronchoscopy, 11 from lung biopsies and 7 lung/nasogastric aspirates (Table 2). Sixty pleural specimens (32 fluid, 28 biopsy/tissue) were culture positive. The most commonly encountered extrapulmonary culture-positive specimen was lymph tissue (n=205) followed by pleural (n=60), bone/joint (n=34), genitourinary tract (n=18), and peritoneal (n=23)

The AMRLN database recorded the HIV status of only 102 (9.6%) patients. No patient was identified as being HIV-seropositive.

Results of in vitro drug susceptibility testing were available for all but 1 isolate (1,056/1,057) for isoniazid, rifampicin, ethambutol, and pyrazinamide Table 3). One other isolate did not have a pyrazinamide result recorded. A total of 107 (10.0%) M. tuberculosis isolates were resistant to at least one of these first-line anti-TB drugs. Resistance to at least isoniazid and rifampicin (defined as MDR) was detected in 25 (2.4%) isolates. All of the MDR isolates were M. tuberculosis (Table 4). Of the 25 MDR-TB isolates, 18 were from the respiratory tract (sputum n=14, bronchoscopy n=3, tissue n=1). Isolates of MDR-TB were obtained from lymph node (n=7) also. Importantly, 10 sputum specimens from MDR-TB cases were smear positive.

A pyrazinamide result was missing from a single isolate and 2 M. bovis isolates were not included in the pyrazinamide analysis.

Ten patients with MDR-TB were Papua New Guinea (PNG) nationals from the TSPZ, and these patients access health services in the outer TSPZ. Of the 9 TSPZ patients with pulmonary TB, seven were smear positive. The impact of MDR-TB cases from the TSPZ has lifted the proportion of MDR-TB cases above the 0.5%–2.0% range (Figure 2). In 2011, 2.4% of all isolates were MDR-TB, but only 1.4% when the TSPZ isolates were excluded. When the TSPZ isolates were excluded, 15 MDR-TB cases were documented from patients born overseas but living in Australia. The 15 MDRTB patients originated from: India (n=3), Nepal (n=2), and single cases from Bangladesh, China, Ethiopia, Indonesia, Iraq, South Africa, South Korea, Sudan, Vietnam, and Zimbabwe. No Australian-born patients were identified with MDR-TB. No pre- XDR-TB (MDR-TB with additional resistance of quinolone or injectable but not both) or XDR-TB cases were reported in 2011. 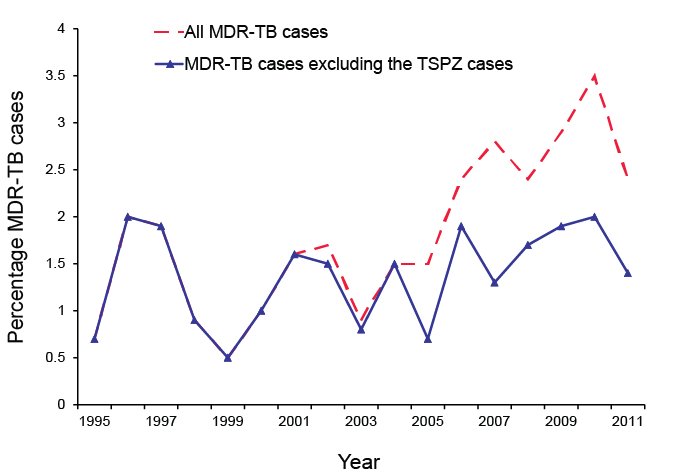 Results of testing for streptomycin were available for 380 of 1,056 (40.0%) isolates with 61 demonstrating resistance to at least streptomycin; 9 had mono-resistance, 30 were resistant to streptomycin and isoniazid, and 19 of 20 MDR-TB strains reporting a streptomycin result were also streptomycin-resistant.

New or previously treated cases, and country of birth

Of the 106 M. tuberculosis isolates resistant to at least one of the standard drugs, 63 (59.4%) were from new cases, 4 (3.8%) from previously treated cases, and no information was available on the remaining 39 cases. Two were Australian-born and the remaining 104 were overseas-born. The 104 overseas-born persons with drug resistant disease were from 25 countries; most frequently from India (n=27), Papua New Guinea (including Torres Strait Islands–PNG) (n=21), Vietnam (n=13), Nepal (n=5) and The Philippines (n=5).

The detection of 1,057 laboratory-confirmed cases of TB in 2011 represented 4.6 cases per 100,000 population. In previous AMRLN reports, for the years 2000–2010, the average rate per 100,000 population was 4.6 with a range 3.6 (2002) to 4.9 (2009). As expected, the 1,385 cases notified to the NNDSS in 2011 was higher than the 1,057 (76.4%) cases of bacteriologically confirmed TB.4 The most frequent reasons postulated for the extra cases reported in the NNDSS include diagnosis of childhood and extrapulmonary TB based on clinical, radiological and epidemiological information, and submission of extrapulmonary samples in formalin precluding bacteriological investigation. In the past decade, the proportion of notifications confirmed by culture has been consistently within a range of 70%–80% of total NNDSS notifications (see previous AMRLN reports).

Importantly, there is little evidence of active transmission occurring to children within Australia. However, laboratory testing has a lower diagnostic yield in children and so laboratory-confirmed cases may not be sufficiently sensitive to detect low level transmission within this patient group.

MDR-TB remains at a consistently low level. Since the AMRLN began preparing annual reports in 1985, the proportion of patients with MDR-TB has stayed within a range of 0.5%–2.0%. Since 2000 however, the influence of MDR-TB cases occurring in PNG nationals moving within the TSPZ has pushed the percentage above 2%. In 2011, when the 10 TSPZ isolates are included, the MDR-TB rate was 2.4%. When the 10 TSPZ isolates were excluded, the proportion of MDR-TB isolates was 1.4%. All MDR-TB cases documented in 2011 were from persons born overseas; no Australian-born persons were diagnosed with MDR-TB.

For 2011, the indicated country of birth for 62 cases was Papua New Guinea; of these, at least 50 were from the TSPZ. Papua New Guinea is facing a national TB emergency.8 In the WHO Western Pacific Region, the country ranks second in terms of estimated TB incidence, first in estimated HIV-sero-positive TB, and third in terms of estimated prevalence. The 2012 WHO global report documented an estimated incidence of 346 cases per 100,000 population and a prevalence of 534 per 100,000 population.1 The AMRLN data showed that 13/62 (21.0%) cases were children less than 15 years of age and 35/62 (56.5%) cases were aged less than 30 years. Although the AMRLN data are small and patient selection bias is likely, there is clear evidence of active transmission occurring in communities, including transmission of drug-resistant TB.

For 2011, the WHO estimated that the MDR-TB rate in PNG among new cases was 4.9% and 23% among retreatment cases.1 A drug resistance surveillance study is underway in PNG employing Xpert MTB/rifampicin for primary screening. This survey will provide invaluable guidance on the extent of rifampicin-resistant TB in PNG to inform the response of the PNG National TB Control Program, international organisations and donors (Dr Sushil Pandey: personal communication).