Norovirus genotype diversity associated with gastroenteritis outbreaks in Victoria in 2013

This study examined the incidence of norovirus outbreaks in Victoria, Australia over one year (2013) and documented the capsid genotypes occurring in the different outbreak settings and age groups. The findings indicate that norovirus vaccine strategies should encompass a broad range of genotypes and, as setting/age may be important in determining genotype incidence, this should be taken into account as well.

The noroviruses are now considered a leading cause of outbreaks of non-bacterial gastroenteritis worldwide. Vaccine strategies against norovirus are currently under consideration but depend on a detailed knowledge of the capsid genotypes. This study examined the incidence of norovirus outbreaks in Victoria over 1 year (2013) and documented the genotypes occurring in the different outbreak settings (healthcare and non-healthcare) and age groups. It was found that 63.1% of gastroenteritis outbreaks were associated with norovirus, thereby showing norovirus to be the major viral cause of illness in gastroenteritis outbreaks. Sixteen capsid genotypes were identified and included GI.2, GI.3, GI.4, GI.6, GI.7, GI.8, GI.9, GII.1, GII.2, GII.3, GII.4, GII.5, GII.6, GII.7, GII.13 and an as yet unclassified GII genotype. All genotypes found in the study, with the exception of GI.9, were detected in the elderly, indicating prior exposure to a norovirus genotype did not appear to confer long term immunity in many cases. The incidence of genotypes GII.1, GII.4 and GII.7 was linked with setting and age. As setting and age were correlated it was not possible to determine which variable was critical with the exception of GII.7, which appeared to be linked to age. The findings indicate that norovirus vaccine strategies should encompass a broad range of genotypes and, as setting or age may be important in determining genotype incidence, this should be taken into account as well. Commun Dis Intell 2015;39(1):E34–E41.

The noroviruses, which are single-stranded positive sense RNA viruses classified in the genus Norovirus within the family Caliciviridae,1 are now considered a leading cause of outbreaks of non-bacterial gastroenteritis worldwide.1–3 Noroviruses are currently classified into 6 genogroups1 and three of these, genogroups I, II and IV (GI, GII and GIV), occur in human infections,1 although little is known concerning the incidence and clinical significance of GIV noroviruses in human infections.4

The faecal specimens included in this study were those sent to the Victorian Infectious Diseases Reference Laboratory (VIDRL) for norovirus testing from outbreaks that occurred during 2013. VIDRL is the main public health laboratory for viral identification in the State of Victoria. As such, it receives faecal material from gastroenteritis outbreaks reported to the Victorian health department. Outbreak specimens are also occasionally sent by other institutions such as hospitals. Only outbreaks that occurred in Victoria, were included in the study.

Three 2 round RT-PCR protocols were used in the study (Table 1). For the first round of each of the 3 protocols the Qiagen (Qiagen GmbH, Hilden, Germany) OneStep RT-PCR kit that combined the RT step and the first round of the PCR was utilised. For the second round PCR the Qiagen Taq DNA polymerase kit was used. ORF 1 RT-PCR for GI and GII norovirus was carried out using a 2-round RT-PCR (Table 1). For studies on region C of ORF 2, GI and GII 2 round RT-PCR protocols were used (Table 1).

Nucleotide sequencing and phylogenetic analysis were carried out essentially as described previously.18 The regions used for sequencing analysis are given in Table 1. Genotype analysis also made use of the norovirus automated genotyping tool (http://www.rivm.nl/mpf/norovirus/typingtool).19

ORF 2 GII.4 variant status was determined in a 3 step process. Firstly, norovirus ORF 2 sequences were tested by the norovirus automated genotyping tool.19 If the genotyping tool assigned a variant form, it was accepted. Secondly, if the typing tool classified a variant as ‘unknown’ it was classified as a ‘like’ variant if the ORF 2 sequence of 195 bases used was no more than 2 bases different from the accepted variant reference strain; this approach yielded the ‘GII.4 New Orleans_2009-like’ and ‘GII.4 Sydney_2012-like’ GII.4 forms found in the study. Thirdly, if an ORF 2 sequence had more than 2 base changes from the known variant reference strain it was classified as ‘GII.4 (unknown)’. The reference strains used for this analysis comprised GII.4 New Orleans_2009 (GU445325) and GII.4 Sydney_2012 (JX459908).

Statistical significance of differences in genotype incidence between different groups was determined by the chi-square test or by Fisher’s exact two-tailed test20 as appropriate. Only sequenceable outbreaks were used to calculate the proportions. The significance of norovirus outbreak seasonality trends was evaluated by the method of partitioning of chi-square as given by Agresti.21 The significance of differences in average age for different settings was determined by Student’s t-test with the Welch approximation.22 The correlation between setting and age was determined using Cohen’s w index from Cramer’s phi coefficient.23

All faecal specimens received at VIDRL for norovirus testing were initially screened by the ORF 1 RT-PCR, which detects and distinguishes between GI and GII noroviruses. If more than 1 specimen from a particular individual in a given outbreak was received, only the 1st specimen from that individual was tested. In addition, 1 specimen from every outbreak, chosen without bias, was also tested by both the ORF 2 GI and ORF 2 GII RT-PCRs and nucleotide sequencing performed if a positive result was obtained. The data were then analysed as follows: an outbreak was classified as norovirus positive if at least 1 specimen from the outbreak was positive by the ORF 1 and/or the ORF 2 assays. For the genotype analysis performed in the current study only sequences generated by the ORF 2 assays were used.

Of these 190 outbreaks, 165 (86.8%) could be classified as healthcare and 25 (13.2%) as non-healthcare. A breakdown of the individual outbreak settings within these 2 categories is given in Table 2.

Figure: The monthly incidence of norovirus outbreaks and all outbreaks tested, Victoria, 2013 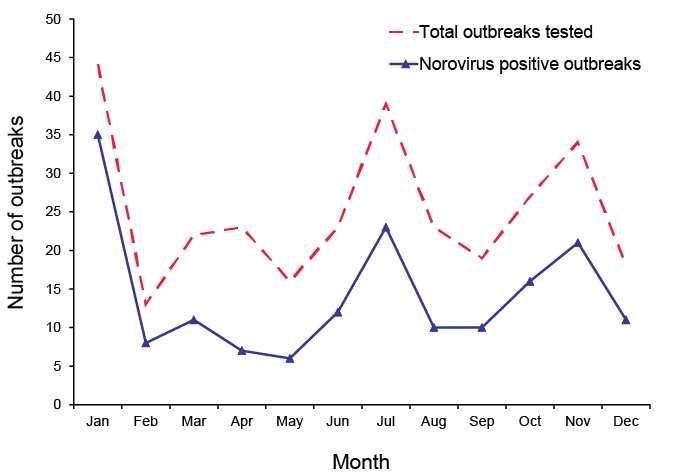 Using the norovirus automated genotyping tool, an ‘untypeable’ GII ORF 2 norovirus sequence was detected in a 90-year-old individual associated with a gastroenteritis outbreak in November 2013. A BLAST search indicated the sequence had 99% nucleotide identity with the 2013 Korean strain KF774001. The strain identified in the current study has been lodged in GenBank as KM025343.

The incidence of GII.1 and GII.4 was linked to both setting and age. However, setting and age were closely correlated; chi-square analysis of setting vs age gave a value for Cohen’s w index of 0.8, which indicates a strong correlation between setting and age.19 Thus the data does not permit discrimination as to whether the critical variable was setting or age for these genotypes.

The data also indicates that there was a significant relationship between the incidence of the genotype GII.7 and setting and age. However, in this case it is possible to discriminate which variable is the critical one. In healthcare settings, GII.7 was significantly more common in those 65 years of age or under (P < 0.029, Fisher’s exact two-tailed test). In non-healthcare settings, GII.7 was only found in individuals 65 years of age or under. These results suggest that for this genotype age was the critical variable.

The current study indicates that the incidence of some genotypes, notably GII.1, GII.4 and GII.7, was linked to both setting and age. Since setting and age were linked to each other it is difficult to determine which was the more important. However, for one genotype, GII.7, age appeared to be the critical variable, with significantly greater incidence in younger age groups, possibly indicating long term immunity with this genotype. The relationship between the incidence of GII.7 and the age of infected individuals does not appear to have been examined in detail in the mainstream literature and warrants further study.

Although GII.4 (ORF 2) norovirus was the most common genotype in this and related studies1, the findings of the current report indicate that norovirus vaccine strategies that target only GII.4 could exclude numerous other norovirus genotypes in both healthcare and non-healthcare settings. Norovirus vaccine strategies should encompass a broad range of genotypes and, as setting/age may be important in determining genotype incidence, this should be taken into account as well.