This annual report describes the rotavirus genotypes responsible for the hospitalisation of Australian children with acute gastroenteritis during 2014. Molecular analysis revealed that G12P[8] was the dominant genotype Australia-wide, followed by G1P[8] and G3P[8]. Differences in genotype distribution were observed based on vaccine type used. This report continues to highlight the dynamic and diverse nature of the wildtype rotavirus population circulating in Australia.

The Australian Rotavirus Surveillance Program, together with collaborating laboratories Australia-wide, reports the rotavirus genotypes responsible for the hospitalisation of children with acute gastroenteritis. During the survey period of 1 January to 31 December 2014, 1,022 faecal samples were referred for rotavirus G and P genotype analysis, and of these 733 were confirmed as rotavirus positive. A total of 480 specimens were collected from children under 5 years of age, while 253 were from older children and adults. Genotype analysis of the 733 rotavirus samples collected from both children and adults revealed that G12P[8] was the dominant genotype in this reporting period, identified in 29.6% of strains nationally. Genotype G1P[8] was the 2nd most common strain nationally, representing 22.9% of samples, followed by genotype G3P[8] (14.9%). This report highlights the continued significance of G12P[8] strains as the major cause of disease in this population. The genotype distribution was slightly altered when the analysis was restricted to samples collected from children under 5 years of age, with G1P[8] being the dominant genotype (29%) followed by G12P[8] as the 2nd most common genotype (26%). Fluctuations in genotype distribution were also observed based on the vaccine type in use. Genotype G12P[8] was more common in states and territories using RotaTeq, while G1P[8] was more common in the locations using Rotarix. This survey highlights the yearly fluctuations in rotavirus genotypes observed since vaccine introduction. The continuation of G12P[8] as the dominant genotype further illustrates the dynamic and diversity present in the wild-type rotavirus population evident in the Australian population since vaccine introduction. Commun Dis Intell 2015;39(3):E337–E346.

Rotaviruses are the most common cause of severe diarrhoea in young children worldwide and is estimated to cause up to 453,000 deaths annually.2 The significant morbidity and mortality associated with rotavirus infection has led to the development of vaccines. Two oral live attenuated rotavirus vaccines; Rotarix® (GlaxoSmithKline) and RotaTeq® (Merck), have been shown to be safe and highly effective in the prevention of severe diarrhoea due to rotavirus infection.3,4 The successful development has seen both rotavirus vaccines licensed in over 125 countries and included in the national vaccination schedules of 63 predominantly high– and middle-income countries worldwide.5 In Australia, rotavirus vaccines have been included into the National Immunisation Program from 1 July 2007, with excellent uptake in subsequent years. RotaTeq is administered in Victoria, South Australia, Western Australia and Queensland, while Rotarix is administered in New South Wales, the Northern Territory, Tasmania and Australian Capital Territory.6

In Australia, rotavirus infection accounted for up to 10,000 childhood hospitalisations for diarrhoea each year in the pre-vaccine era.7 A significant impact on the disease burden has been observed since vaccine introduction, with state-based studies in New South Wales, Queensland, South Australia and Victoria showing a substantial decline in both rotavirus coded and non-rotavirus coded hospitalisations and emergency room visits since vaccine introduction.6,8–10

The Australian Rotavirus Surveillance Program has studied the annual circulation patterns of rotavirus genotypes causing disease in Australian children since 1997. Genotyping studies have shown that the strain diversity and temporal and geographic changes occur each year, and provide the baseline information vital to assist vaccine introduction and ongoing evaluation.11 Therefore, characterisation of circulating rotavirus genotypes in the vaccine era will provide insight into whether vaccine introduction has impacted on virus epidemiology and altered circulating strains, which could have ongoing consequences for the success of the vaccination programs.

In this report, we describe the genotype of rotavirus strains causing severe gastroenteritis in Australia for the period 1 January to 31 December, 2014.

Rotavirus positive specimens detected by enzyme immunoassay (EIA) or latex agglutination in collaborating laboratories across Australia were collected, stored frozen and forwarded to Melbourne, together with relevant age and sex details. The laboratories contributing samples were:

Viral RNA was extracted from 10%–20% of faecal extracts of each specimen using the QIAamp Viral RNA mini extraction kit (Qiagen) according to the manufacturer’s instructions. The rotavirus G and P genotype were determined for each sample by the application of independent hemi-nested multiplex reverse transcription polymerase chain reaction (RT-PCR) assays. The first round RT-PCR assays were performed using the Qiagen one step RT-PCR kit, using VP7 conserved primers VP7F and VP7R, or VP4 conserved primers VP4F and VP4R. The second round genotyping PCR reactions were conducted using specific oligonucleotide primers for G types 1, 2, 3, 4, 8, 9 and 12 or P types [4], [6], [8], [9], [10] and [11].12–17 The G and P genotype of each sample was assigned using agarose gel analysis of second round PCR products.

Any samples that provided a discordant result between the initial antigen detection and genotype assay were further tested using the commercial rotavirus enzyme linked immunosorbent assay ProSpecT (Thermo Fisher, Aus), as per manufacturer’s instructions to confirm the presence of rotavirus antigen.

A total of 1,022 faecal specimens were collected during the period 1 January to 31 December 2014 for analysis from 15 collaborating centres across Australia.

A total of 733 samples were confirmed as rotavirus positive by EIA (ProSpecT, OXOID) or RT-PCR analysis. Of these, 480 were collected from children under 5 years of age, and 253 were from older children and adults. An additional 289 specimens contained either insufficient specimen for genotyping (n= 30), or the specimen was not confirmed to be positive for rotavirus (n= 259) and these were not analysed further.

G1P[8] strains were the 2nd most common genotype identified nationally, representing 22.9% of all specimens. This genotype was identified in 6 states, and was the dominant type in the Northern Territory and Western Australia, where it represented 71.2% and 23.6% respectively. In Victoria and South Australia, G1P[8] was the 2nd most common type, representing 15% and 20.8% respectively.

Seventy-one samples contained a non-typeable G or P genotype, with 50% observed in Western Australia. The majority of these were GntP[8]. These non-typeable samples are likely to be samples that contain inhibitors in extracted RNA that prevent the function of the enzymes used in RT and/or PCR steps.

Identification of genotypes according to vaccine type

Figure: Overall distribution of rotavirus G and P genotypes identified in Australian children based on vaccine usage for period 1 January to 31 December 2014 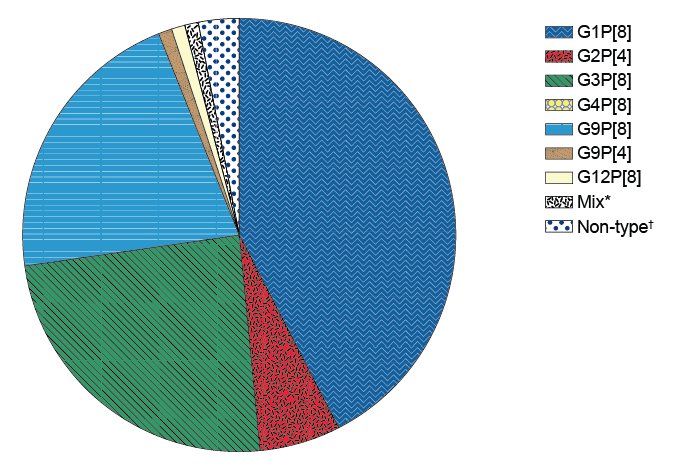 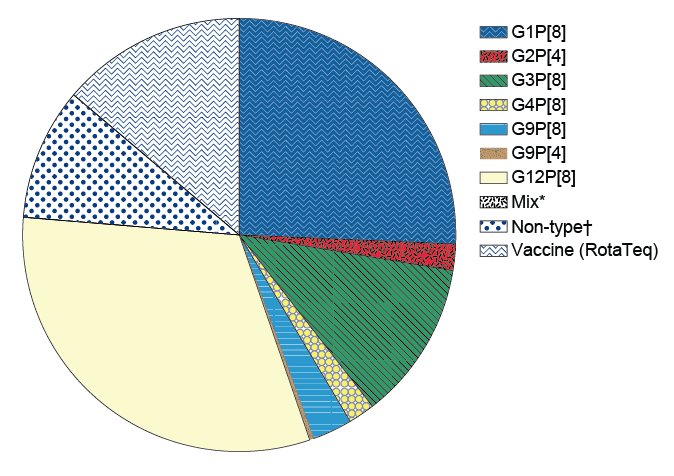 * A sample where a multiple G and/or P genotype was identified.

† A sample where no G and/or P genotype was not determined.

Consistency in genotype distribution within locations using RotaTeq vaccine was observed, with three of the 4 RotaTeq states (Queensland, Victoria and South Australia) having G12P[8] as the dominant genotype. In the remaining location, Western Australia, G12P[8] was the 2nd most common type. However, in locations using Rotarix (New South Wales and the Northern Territory), the dominant genotype differed, with G1P[8] being dominant in the Northern Territory and G9P[8] dominant in New South Wales.

The unexpected emergence of G12P[8] in 2012, and dominance in 2013 and 2014 is the first time since vaccine introduction that a single genotype has remained dominant for more than a single year in Australia.17,18 The G12P[8] genotype continued to persist in the same locations in 2014 as were observed in 2013, Queensland, Victoria and South Australia, and continued to emerge in Western Australia during 2014. The first G12 strain was detected in a 2-year-old child in 1987 in the Philippines. More than 10 years later, G12 strains were reported in many settings including Thailand (1998), the United States of America (USA) (1999) and subsequently in several Asian countries, such as India, Japan, and Korea.19–22 In Europe, G12 strains were identified in 15 of 16 member countries between 2006–2009.23 Until recently, G12 strains represented a sporadic or rare type in these settings, however, G12 has recently become prevalent in a number of countries in the developed and developing world. In West Africa, G12 strains represented more than 80% of strains in 2011–2012,24 while in the Basque Country of Spain, G12P[8] was the predominant genotype, causing 65% of rotavirus gastroenteritis.25 This Spanish outbreak was characterised by a broad geographical distribution (rural and urban) and affected both infants and children.25 The emerging G12P[8] genotype has also been observed in Uruguay (2011–2012), as well as Italy in 2012–2013.26–27 The New Vaccine Surveillance Network in the USA, surveyed 7 sites during the 2009–2010 and 2010–2011 seasons, and G12 viruses accounted for approximately 10% of the typed rotaviruses. It was also found to account for 53% of a small group of rotavirus-positive stool samples from adults in Chicago in 2010.28 Unlike the other settings, a marked increase in rotavirus hospitalisations was associated with the emergence of G12P[8] strains in Nicaragua, despite having a high vaccine coverage.29 In Australia, both of the current rotavirus vaccines Rotarix and RotaTeq provided excellent protection against disease caused by the G12P[8] strains.

The predominance of G12P[8] rotaviruses in several locations suggest that they may soon become a major human rotavirus genotype. The emergence or re-emergence of G12P[8] rotavirus could be the result of vaccine pressure exerted on rotavirus types that are more similar to those in currently licensed vaccines or could represent genotype fluctuation occurring independently of the vaccine. Importantly, the presence of the P[8] VP4 protein in the G12 strains suggests that both rotavirus vaccines are likely to be effective against the emergence of G12P[8] strains. This is supported by a vaccine efficacy trial conducted in South Africa and Malawi that showed comparable protection against a range of circulating genotypes including G12 strains.30

The use of different vaccines in Australian states and territories provides a unique opportunity to compare the effect of each vaccine on the circulating wild type strains in cohort of strains identified in children under 5 years of age. In the current survey, G12P[8] strains were the most common in locations using RotaTeq vaccine, however, none were observed in locations using Rotarix vaccine. This represents the 3rd year where this genotype was more prevalent in locations using RotaTeq. Genotype G3P[8] strains were identified in both RotaTeq and Rotarix locations, however, they were more common in RotaTeq states in 2014, and represents the 4th year this has occurred.17,18,31 In 2014, genotype G9P[8] was more common in locations using Rotarix vaccine. Thus differences in the genotype distribution were again observed based on vaccine usage in 2014, supporting those observed each year since vaccine introduction.32

This survey of rotavirus strains causing disease between 1 January and 31 December 2014 highlights the continued emergence of G12P[8] rotavirus as the dominant genotype in Australia. The emergence of G12P[8] and the re-emergence of G9P[8] in 2014 illustrates a unique change to the genotype patterns in Australia. The genotype data highlight the diversity of rotavirus, and illustrates the continual changes in the wild type virus population, suggesting a more dynamic virus population is present in the current post vaccine era. The continued changes in the wild type strain population will continue to challenge vaccine effectiveness. Importantly however, rotavirus vaccines continue to be highly effective and provide excellent protection from disease caused by the circulating rotavirus strains.

The Rotavirus Surveillance Program is supported by grants from the Australian Government Department of Health, GlaxoSmithKline and CSL. Dr CD Kirkwood is supported by a NHMRC senior research fellowship. We thank H Tran for providing technical assistance.

Rotavirus positive specimens were collected from numerous centres throughout Australia. The significant time and effort involved in the collection, storage, packaging, compiling data and forwarding of specimens was much appreciated.

Dr A Kesson, Ms I Tam and members of the Virology Department, The Children’s Hospital at Westmead