Pregnant Aboriginal and Torres Strait Islander women are at particular risk of severe illness and high attack rates of influenza infection. This report outlines the coverage of influenza vaccine in a cohort of Indigenous pregnant women who participants of a vaccine trial; prior to and during the 2009 H1N1 influenza pandemic.

Pregnant Aboriginal and Torres Strait Islander women are at particular risk of severe illness and high attack rates of influenza infection. In Australia, routine seasonal influenza vaccination is currently strongly recommended for all pregnant women and women planning pregnancy, and is provided free of charge for all pregnant women. We sought to determine vaccination coverage, describe the trends and characteristics associated with influenza vaccine uptake and determine the validity of self-reported influenza vaccination in a population of Indigenous pregnant women who were participants of a vaccine trial, prior to and during the 2009 H1N1 influenza pandemic. Vaccine coverage over the study period was 16% (35/214), increasing from 2.2% (3/136) in the period preceding the pandemic (2006–2009) to 41% (32/78) in the intra-pandemic period (2009–2010). Self-report was not a reliable estimate of verified vaccination status in the pre-pandemic period (κ=0.38) but was reliable in the intra-pandemic period (κ=0.91). None of the socio-demographic characteristics that we examined were associated with vaccine uptake. Whilst the increase in maternal influenza coverage rates are encouraging and indicate a willingness of pregnant Indigenous women to be vaccinated, the majority of women remained unvaccinated. Activities to improve influenza vaccination coverage for Indigenous pregnant women and monitor vaccine uptake remain a priority. Commun Dis Intell 2016;40(3):E340–E346.

Influenza is responsible for considerable morbidity within Australia each year.1 The annual (seasonal) influenza vaccine is recommended for all persons more than 6 months of age who have risk factors for influenza infection. This ‘at risk’ group includes all women who are pregnant during an influenza season as well as all Indigenous Australians 15 years of age or over, both reflecting the disproportionate influenza-related morbidity and mortality observed in these 2 groups.2

Influenza infection during pregnancy places the health of both the mother and the fetus at risk, which has been demonstrated in numerous settings worldwide.3,4 Influenza infection during pregnancy is associated with adverse maternal and neonatal outcomes including preterm labour and delivery, pneumonia, hospitalisation and death.5 Influenza-attributable morbidity and mortality is of particular concern in women who will be pregnant in the second or third trimester during the influenza season.6

Aboriginal and Torres Strait Islander people experience elevated rates and severity of influenza infection compared with their non-Indigenous counterparts. Pneumonia is the most common complication and remains the most important communicable disease contributor to premature mortality in the Indigenous population, with children under 5 years of age and adults over 25 years of age most at risk.7 Data from the 2009 H1N1 pandemic indicated that among Indigenous Australian adults residing in the Northern Territory rates of notification, hospital admission and Intensive Care Unit admission were 3.5, 12 and 5 times higher, respectively, than for non-Indigenous adults.8

A higher prevalence of comorbidities is 1 factor that has been associated with the increased risk of severe influenza infection among Indigenous Australians.7,9 These include cardiac disease, chronic respiratory conditions, chronic obstructive pulmonary disease, severe asthma, diabetes mellitus and chronic renal failure.10,11 Socio-demographic factors include a high level of mobility between communities, overcrowded living conditions, poverty, and poorly constructed and maintained housing.8,9,12 All are recognised contributors to the spread of communicable diseases such as influenza.8,9

This cross-sectional study was nested within a randomised controlled trial (RCT), which aimed to determine the effectiveness of maternal 23-valent pneumococcal polysaccharide vaccine in preventing ear disease in Indigenous infants residing in the Northern Territory.19 Participants identified as Aboriginal or Torres Strait Islander; were aged between 17 and 39 years; had a current, uncomplicated singleton pregnancy; intended to deliver their infant at the Royal Darwin Hospital or Alice Springs Hospital; lived in 1 of 2 regional (Darwin and Alice Springs) or 4 remote participating communities; intended to live in the study area until 7 months post-partum; and were between 30 and 36 weeks gestation (inclusive at the time of enrolment). Enrolment occurred from August 2006 to January 2011.

Data were collected through face-to-face interviews with participants. In addition, we undertook systematic review of medical records, documenting all medical clinic attendances (including hospitalisations) within the previous 5 years, using a structured data collection form. Influenza vaccine uptake was ascertained through self-report and from documented receipt of influenza vaccination in medical records. We also validated influenza vaccination history through the Northern Territory Centre for Disease Control adult immunisation database. Comorbid medical conditions and various socio-demographic characteristics of participants (maternal and gestational age, parity, education, tobacco use and household occupancy) were recorded.

Vaccine coverage was calculated annually for the 12-month period prior to the participant delivery date. These data were compared with influenza notification rates in the Northern Territory for the same period, calculated from the National Notifiable Diseases Surveillance System website.20 The inter-rater agreement between self-reported influenza vaccination during pregnancy and documented vaccine receipt in participant medical records in the 12-month period prior to the interview was calculated. The validity of self-reported vaccination was compared for the pre-pandemic and intra-pandemic H1N1 influenza periods. The latter was defined as the release of the World Health Organization first Global Alert and Response declaration of influenza A(H1N1) on 24 April 2009. Whilst data on documented vaccination coverage were obtained for all participants, self-report of influenza vaccination during pregnancy was only assessed from 25 September 2007. Therefore, the period 25 September 2007 to 24 April 2009 was compared with the period 25 April 2009 to 4 May 2010, the date the final vaccine study participant was interviewed (at that time the pandemic was ongoing21).

Participants provided written informed consent to participate in this study. This study (and consent procedure) was granted ethics approval by the Human Research Ethics Committee of the Northern Territory Department and Health and Families and the Menzies School of Health Research (05/52).

There were 627 pregnant Indigenous women who were invited to participate in the RCT, of whom 313 (50%) consented (Figure 1). Over the 4-year period, the consent rate for the vaccine study remained at approximately 50% of all approached participants (Figure 2). Whilst 86 women were subsequently deemed ineligible, a further 13 participants withdrew leaving 214 participants who completed the antenatal and post-partum assessments that contributed to this report. 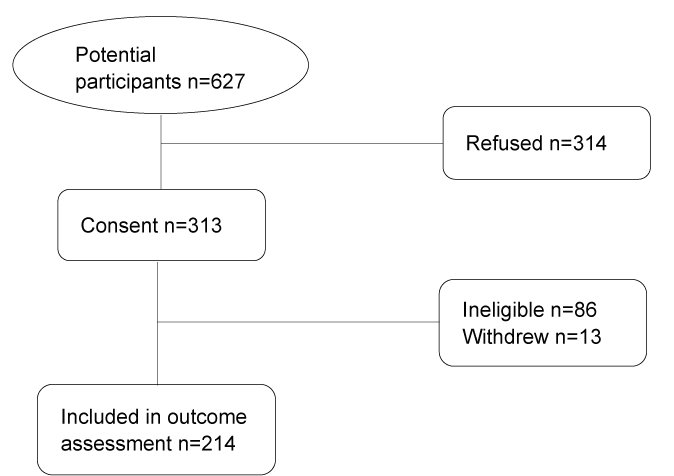 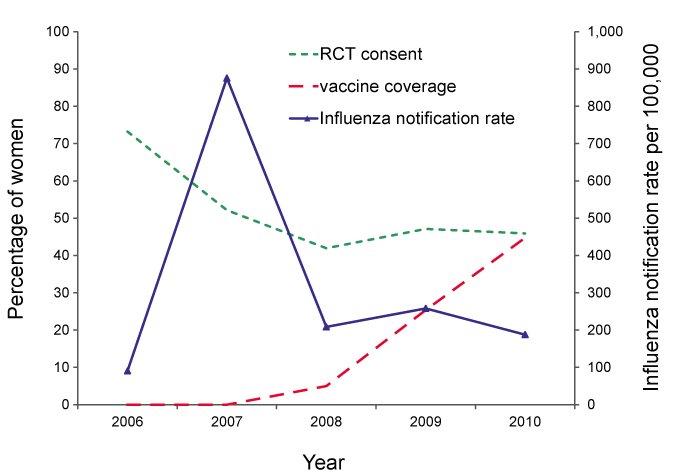 We ascertained influenza vaccination status from all 214 participants, among whom 16% (n=35) had been vaccinated within the 12 months preceding their due date. Of the 35 women with documented influenza vaccination, 2 (6%) were vaccinated prior to becoming pregnant, 9 (26%) during their first trimester of pregnancy, 13 (37%) in their 2nd trimester and 11 (31%) in their 3rd trimester.

Influenza vaccination coverage during the pre-pandemic period was 2.2% (3/136). The 3 women vaccinated during this period received their vaccines in January 2008 (n=1) or April 2008 (n=2). Vaccine uptake then increased more than 10-fold to 41% (32/78) during the subsequent intra-pandemic period. Over this same period, from April 2009, there was a significant increase in the number of influenza notifications in the Northern Territory, which coincided with the H1N1 influenza pandemic (Figure 2).20

In our study population, uptake of influenza vaccine coverage during the pre-pandemic period was negligible (2%). There was a substantial increase in vaccine uptake that coincided both with the declaration of the global alert for influenza H1N1 and the local increase in influenza notifications. Whilst the improvement in the vaccine uptake to 41% was encouraging the coverage rate remained sub-optimal. The majority of pregnant women remained unvaccinated and susceptible to the complication of influenza during pregnancy.

The 10-fold increase in vaccine coverage between the pre- and intra-pandemic periods provided suggests that given the right conditions, women will choose to receive the vaccine. While it was beyond the scope of this study to ask women their reasons for choosing to be vaccinated or not, a review of the literature shows a number of key initiatives that took place in Australia during that period may have contributed to this increase in coverage. The first World Health Organization global pandemic alert on 24 April 2009 set in motion the Australian Health Management Plan for Pandemic Influenza.23 A key component of this infection control strategy was an extensive public health campaign, raising awareness among medical practitioners and the general public of the risks of pandemic H1N1 influenza infection. This campaign was accompanied by rapid manufacture, the Therapeutic Goods Administration approval and funding of a monovalent (September 2009) and then trivalent pandemic influenza vaccine (November 2009).24,25

We found that self-reported influenza vaccination status to be a reliable indicator for documented receipt of the vaccine for the whole study period and the intra-pandemic period. With only 3 women vaccinated in the pre-pandemic period, the correlation was less reliable at this time. There were no socio-demographic characteristics of participants that were significantly associated with receipt of the inactivated influenza vaccine.

There are a number of limitations that may impact on the generalisability of our findings. Participants had agreed to take part in a vaccine trial, which may mean that study participants were more likely to be accepting of vaccines compared with the wider population. In addition, participants were generally more educated and had less chronic illness than the Indigenous female population of the Northern Territory.26,27 Given these factors, we expect our calculation of vaccine coverage may have overestimated true coverage of pregnant Indigenous women in the Northern Territory. Given a relatively small sample of women, our within cohort comparison of the specific factors that we examined may have been underpowered to exclude an association with vaccine uptake.

Whilst acknowledging the limitations of the study, we highlight several findings that require public health action. Relatively low uptake in both the pre- and intra-pandemic period demonstrates a need for more effective, targeted activities to improve influenza vaccine uptake during pregnancy among Indigenous Australians specifically but possibly among all pregnant women in Australia. The heightened public awareness of influenza post-pandemic offers an opportunity to continue to promote maternal influenza vaccination. However, strategies to improve uptake must be accompanied by comprehensive monitoring of coverage.

National telephone surveys to determine vaccine coverage are unlikely to reach a significant proportion of pregnant Indigenous women, who may have low access to landlines.27 The proposed whole of life immunisation register may be a feasible option for monitoring vaccine uptake in pregnancy and would also allow for the evaluation of vaccination programs across Australia.28,29

There may well be other predictors of vaccine uptake among pregnant Indigenous women in Australia but, to our knowledge, these are yet to be comprehensively investigated. In our view, such work should not only involve exploration of socio-demographic predictors of uptake but also qualitative research into the attitudes and behaviours of pregnant women and their health care providers.

The provision of inactivated influenza vaccination during pregnancy is considered the safest and most effective way of protecting women and their babies from the complications of influenza during pregnancy.32 Our data suggests that pregnant Indigenous women are prepared to be vaccinated; however, activities to promote improved coverage and understand barriers in our setting are required. In addition, routine monitoring of vaccination in pregnancy is also required to ensure uptake in this high-risk group reflects national recommendations.