Timing of influenza vaccination in an Australian community-based surveillance system, 2010-14

The national immunization program provides influenza vaccine free to people at high-risk of severe influenza, however, the timing of the delivery of the vaccine is not currently recorded. This paper combines 2010-14 data from an online national community influenza-like illness surveillance system (Flutracking) and an Australia-wide hospital-based sentinel surveillance system (FluCAN) to assess whether adults were vaccinated before the onset of the influenza season and whether the timing of vaccine delivery may be a concern for the validity of hospital studies that estimate influenza vaccine effectiveness.

In Australia, the National Immunisation Program provides influenza vaccine free to people at high-risk of severe influenza including the elderly, anyone with an underlying medical condition, pregnant women, Indigenous Australians and nursing homes residents. This program aims to deliver the seasonal influenza vaccine to these groups before the onset of the influenza season, typically between March and May of each year. The timing of vaccination is important for a number of reasons.

For individual protection, the vaccine needs to be given before the influenza virus is circulating. Based on recent European research, some high-risk groups might be better vaccinated late in the pre-season because immunity may wane over the course of a single season.1,2,3

For estimates of influenza vaccine effectiveness (VE) derived from health facility-based surveillance data (using the test-negative study design), knowing when someone was vaccinated is important for determining whether they can be expected to have developed immunity as a result of vaccination. Such estimates typically exclude or consider unvaccinated those people vaccinated within 10 to 14 days of attendance at the health facility because vaccine-induced immunity takes this long to develop.4 Avoiding this potential misascertainment of immunisation status is challenging in recruitment sites that are different from where people receive the vaccine, such as hospital-based studies, as the vaccination date may not be easily verified.4–9

The whole-of-life vaccine registry10 could provide data on the timing of vaccination for adult groups targeted by the Australian National Immunisation Program. However, full implementation may take several years. We aimed to assess whether adults (≥18 years of age) were vaccinated before the onset of the influenza season and whether misclassification bias was likely to be a concern for estimating VE in Australia by using data from 2 existing national influenza surveillance systems for 2010 to 2014.

We plotted the onset of illness for patients with influenza admitted to hospitals participating in the Influenza Complications Alert Network (FluCAN),11 an Australia-wide hospital-based sentinel surveillance system, against the uptake of influenza vaccine throughout each season among participants of Flutracking,12 an online national community influenza-like illness (ILI) surveillance system.

Flutracking participants were recruited by a combination of emailed invitations via organisation email networks, government and commercial workplaces, promotional activities in the media, and increasingly through participants inviting friends over recent years.13 The cumulative proportion of vaccinated participants who reported being vaccinated was plotted by week for each season to document vaccine uptake. Vaccinated participants needed to have responded to at least 1 weekly online survey by the end of the influenza season defined as a period of 24 to 26 weeks between April and October in each year.

We separately graphed those aged 18–64 years and those aged 65 years or over as the provision of free vaccine to the elderly may influence the timing of vaccination. Except for Indigenous status, Flutracking does not collect data on other medical and demographic factors that influence eligibility for free government supplied vaccine. Although the group of patients aged 18–64 years is expected to be mostly made of people ineligible for free vaccine, it may include those who are eligible such as the few Indigenous participants as well as pregnant women or those with underlying medical conditions.

The number of Flutracking participants who reported being vaccinated has almost doubled since 2010 for those aged 18–64 years and increased by more than 3 and a half times for those aged 65 years or over (Table 1). By the beginning of June (week 22; Figure 1; Table 2), the majority of Flutracking respondents aged 65 years or over who received the influenza vaccine at any time during the season had already been vaccinated (range 70% to 91%). In 3 of the 5 seasons, slightly less of the younger age group (Figure 2; Table 2) had been vaccinated at this point (range 67% to 86%). Between 2% and 11% of patients admitted to hospital for a severe respiratory illness during each season had developed an ILI by the start of June. In 2012, a higher proportion of patients were admitted earlier in the season compared with other years. 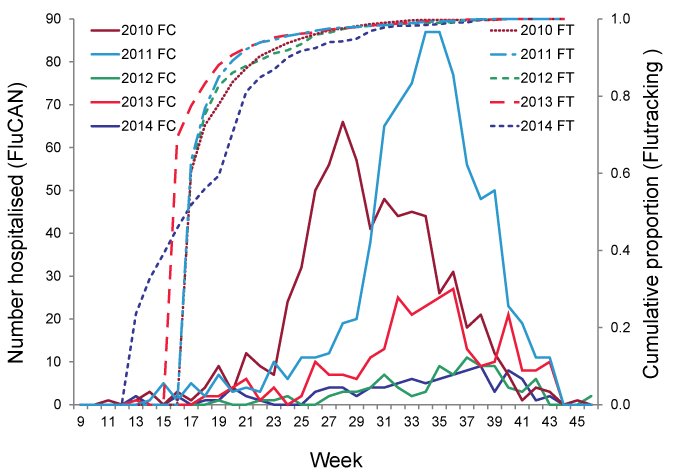 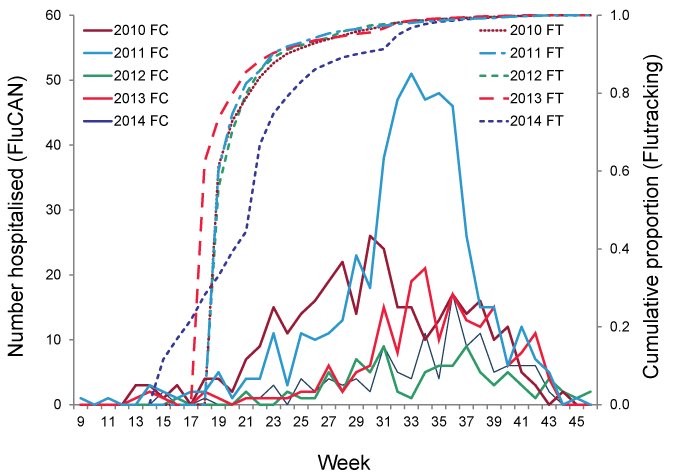 These data suggest that the majority of people are vaccinated before the onset of the influenza season, at least for these 5 seasons that exhibit the typical winter period of transmission. In turn, this suggests that misascertainment bias is unlikely to be a major concern for hospital-based vaccine effectiveness studies in Australia14–18 and that unusually early season onset (or delayed vaccine availability) would be needed to compromise the current timing of the delivery of the vaccine program for most recipients. In Australia, the influenza vaccine usually becomes available in March, and we note that a significant proportion of the Flutracking sample had received vaccine by April–May, when Flutracking surveillance typically commences. It is possible that Flutracking participants may receive influenza vaccination earlier than the general population given that the weekly online survey reminds them about the vaccine by asking them if they have been vaccinated in the prior week. However, the uptake of vaccine among Flutracking participants who were vaccinated is consistent with an earlier Australian study that found that vaccine coverage estimated from pre-season pneumonia cases (in whom influenza was an unlikely cause) were similar to mid-season test-negative controls for those aged 65 years or over, those aged less than 65 years with a medical condition and those aged less than 65 years without a medical condition.19

Flutracking data for those aged 65 years or over are also consistent with periodic nationally representative vaccination coverage surveys by the Australian Institute of Health and Welfare (AIHW) in 2002, 2003, 2004, and 2009, which found that between 70% and 78% of the elderly were vaccinated by the end of April and 86% to 92% by the end of May.20–23 A minority of Flutracking participants aged 65 years or over were vaccinated between the beginning of May and the start of June, indicating that most are vaccinated earlier in the season. Exactly how early is not known as Flutracking surveillance only commences in April. As noted, this is important for the elderly who may benefit from receiving the vaccine closer to the onset of the influenza season because of possible waning immunity.

AIHW vaccination coverage estimates for younger age groups tend to be lower than recorded by Flutracking, presumably related to selection biases associated with Flutracking such as much higher education levels of participants compared with the general population.24 The Flutracking subset for those aged 18–64 years may also be biased by over-representation of groups eligible or ineligible for free government vaccine.

The consistency of Flutracking data with representative studies does suggest that it might be able to provide general information on when influenza vaccines are being given and an indication of the magnitude of misacertainment of immunisation status for hospital-based studies of influenza vaccine effectiveness. Early vaccine coverage estimates, whether through community or hospital-based systems, may be useful for identifying community concerns about vaccine safety and for triggering public health investigations to explore decreases in coverage. For instance, negative public reaction to vaccination after the 2009 H1N1 influenza pandemic25 led to slow uptake of the seasonal trivalent influenza vaccine in the following year (as suggested by the uptake of the vaccine in 2010 in Figures 1 and 2). Until an adult vaccine registry is established, these two surveillance systems can provide data on vaccine uptake that is not currently available from any other source. However, these data must be carefully appraised each season given the increasing but non-random community participation in Flutracking and the biases inherent to each system: FluCAN mostly relies on patient recall for the date of vaccination and Flutracking is a sample of online volunteers that have different socio-demographic features to the general Australian population.

The FluCAN study and Flutracking surveillance are supported by the Australian Department of Health. B Coghlan is supported by a National Health and Medical Research Council postgraduate scholarship.