Haycocknema perplexum: An emerging cause of parasitic myositis in Australia

Haycocknema perplexum is a rare cause of parasitic myositis, with all cases of human infection reported from Australia. This paper reports on a case involving an 80 year-old Queensland wildlife carer, who presented with muscle weakness, mild eosinophilia and creatine kinase elevation.

Haycocknema perplexum is a rare cause of parasitic myositis, with all cases of human infection reported from Australia. This case involved an 80-year-old Queensland wildlife carer, who presented with muscle weakness, mild eosinophilia and creatine kinase elevation. This case supports an association with native animal contact and highlights the debilitating nature of this infection. Commun Dis Intell 2016;40(4):E496–E499.

In 1998, Dennett et al. described a new nematode that causes myositis, Haycocknema perplexum.1 Male and female H. perplexum live inside individual muscle fibres and are 25 to 45 um in diameter and 300–500 um long.1 The published literature contains 8 reports of H. perplexum, 4 from Tasmania and 4 from northern Queensland.1-4 This report describes the 9th known case, an 80–year-old female from northern Queensland (Table).

In October 2012, an 80-year-old wildlife carer was referred to the Cairns Hospital Infectious Diseases clinic with possible chronic Q fever and concerns regarding Lyme disease. She was prescribed rosuvastatin 10 mg at the time of review. She reported a progressive illness involving weakness of her arms and legs over the past 18 months, with functional limitation, such that she was unable to dress or shower independently. In addition, she reported a weight loss of approximately 5 kilograms over the previous 12 months. She reported no dysphagia, dysphonia, shortness of breath or myalgia.

The patient reported extensive native wildlife exposure, such as handfeeding puggles (juvenile echidnas) and caring for various marsupials including koalas, wombats, possums, wallabies and kangaroos. She owned a pet galah. She had sustained multiple tick bites in the past, but reported no direct cattle exposure. Her travel history was extensive, with past travel to South American, African and Asian countries. She reported previous, limited travel to Tasmania.

On examination, she appeared thin, with a weight of 59 kg. Diffuse, non-tender muscle wasting was evident in her upper and lower limbs. Cranial nerve examination was normal. Neurological examination of her limbs revealed symmetrically reduced power of 3 on 5, more marked proximally than distally. Knee jerks were present, with all other limb tendon reflexes absent.

Electromyography showed florid myopathic changes, with frequent spontaneous activity and occasional myotonic discharge from the proximal limb muscles. A muscle biopsy from the right anterolateral thigh showed an active inflammatory myopathy, with infiltration of the muscle by mononuclear cells and eosinophilic granulocytes and evidence of muscle injury. Three minute intracellular nematodes were identified in the limited biopsy provided (approximately 15 square mm in cross-sectional area in the cryostat sections). The nematodes were 16 microns in diameter in the plane of section and were characterised by a thin eosinophilic cuticle with surrounding sarcoplasmic retraction halo (Figures 1 and 2). Unfortunately, the tissue retained for electron microscopic examination did not contain any parasites. Although there were only limited nematodes for assessment, given the minute size, intracellular location, and association with eosinophilic myositis, a histopathologic diagnosis of H. perplexum parasitic myositis was made. 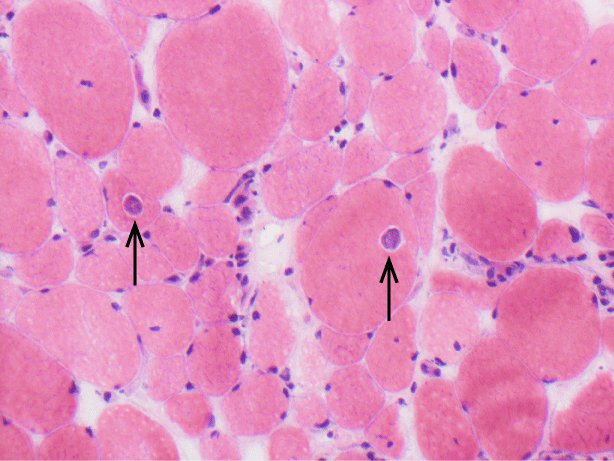 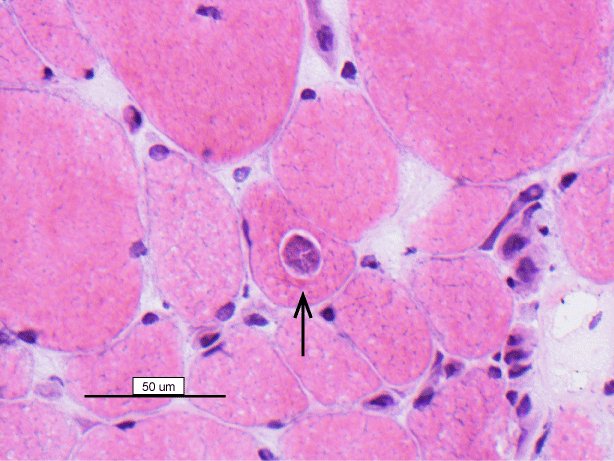 Initial management of this patient included cessation of rosuvastatin, with no steroids administered at any stage of her illness. She was treated with albendazole 400 mg twice daily for 12 weeks. She tolerated this treatment well, with normalisation of her eosinophil count and CK. Unfortunately, she experienced no functional improvement. Her limb muscle power continued to slowly decline, with increased assistance required for activities of daily living.

This case of H. perplexum shares several similarities with the previously reported accounts. This patient lived in the Tablelands Region of Far North Queensland, with a history of limited prior travel to Tasmania. Northern Queensland and Tasmania remain the only known locations of H. perplexum human infection.1-4 She described sustained, close contact with native animals. Three of the previous 8 cases detail extensive animal contact.

Treatment recommendations for H. perplexum based on limited case reports include Albendazole 400 mg twice daily for 8 to 9 weeks, with a strong caution against steroid use.5 The patient in this case received 12 weeks of treatment, in view of good medication tolerance and uncertainty regarding optimal treatment duration. Given the limited information on the life cycle and transmission of H. perplexum, no infection prevention or control recommendations exist at present.

While H. perplexum is a suspected human zoonosis, the natural host remains unknown. H. perplexum had previously been assigned to the superfamily Muspiceoidea.6 Muspiceoids have been isolated from Australian animals that include mice, bats, kangaroos, tree kangaroos, wallabies, pademelons, koalas and biting midge.6 However, new molecular findings have cast doubt on the earlier classification of H. perplexum, with further molecular evidence needed to elucidate phylogenetic relationships for other muspiceoid nematodes.4 A Haycocknema-like nematode has been identified in muscle fibres from a horse imported to Switzerland from Ireland.7

The difficulties and delays experienced in the diagnosis of H. perplexum raise the possibility of undiagnosed cases in the Australian community. The disease spectrum may include subclinical infection, in addition to severe cases that receive clinical attention. The report of an infection similar to H. perplexum in an Irish horse implies a greater potential distribution of human infection outside of Australia. Several of the reported cases suggest the importance of prolonged, close animal contact for acquisition of the parasite. At risk groups may include wildlife carers and veterinarians.

Potential areas for future research into H. perplexum include investigation into the natural host, mechanism of transmission and the life cycle. Recent definition of nuclear and mitochondrial gene markers for H. perplexum provide a molecular diagnostic tool for parasitic myositis in humans.4 In addition, polymerase chain reaction-based sequencing provides a useful research tool to survey potential reservoir animals or vectors, including horses, for H. perplexum and related genotypes.4,7

This, the 9th reported case of human H. perplexum infection, adds to the limited clinical information on the presentation and course of this disease. It supports the potential importance of close wildlife contact as a risk factor in those who develop clinical infection. The case highlights the serious nature of H. perplexum infection and the need for further biological and clinical research into this condition.

There are no conflicts of interest to declare.