Passive surveillance of antimicrobial resistance in Queensland public hospitals: the basis for a national system?

This report published in Communicable Diseases Intelligence, Volume 28, Number 2 details an antimicrobial resistance surveillance system developed by Queensland Health Pathology and Scientific Services with the capacity to handle national data and discusses if this could be used as the basis for national surveillance.

Australia currently has no system of passive surveillance of antimicrobial resistance in spite of the importance of surveillance in identifying and defining emergent resistance being generally accepted. Queensland Health Pathology and Scientific Services have developed flexible software for passive surveillance with the capacity to handle national data. The system imports raw data strings in delimited ASCII text format into a relational database and screens to exclude duplicates before the processing of the cumulative susceptibility data. It allows considerable flexibility in inquiry parameters and has the ability to 'drill down' to individual laboratory results. Examples of analytical output are given for 49,169 unique isolate results obtained in all Queensland Health Pathology Service laboratories from 1 January to 30 June 2003. The system could form the basis of a national system for passive antimicrobial resistance surveillance. Commun Dis Intell 2004;28:230-235.

The emergence of increasing levels of resistance in a growing number of major pathogens has led to the recognition of antimicrobial resistance as an important public health issue. Government sponsored reports in a number of countries including the United Kingdom, the United States of America and Australia have identified the need for action to deal with this emergent problem.1,2,3 Furthermore, the World Health Organization has acknowledged the global nature of this problem and has recommended a concerted international approach to controlling the emergence and spread of antimicrobial resistance.4 The importance of surveillance in identifying and defining emergent resistance is generally accepted. The Australian report (JETACAR)3 recommended that a comprehensive surveillance system be established in Australia incorporating both active and passive components.3

Prior to the publication of JETACAR passive surveillance of resistance in a broad range of pathogens was conducted for a number of years by the National Antimicrobial Resistance Surveillance Program (NARSP) by collation of results obtained in 29 pathology laboratories both public and private.5 However, due to the laborious nature of data collection and collation, NARSP publications lagged behind testing by several years at least. This tended to limit their utility in identifying emergent problems. The introduction of The Surveillance Network™ (TSN®), an American commercial computerised surveillance system, into Australia in 1998 promised for some time to fill the gap vacated by NARSP and to provide national passive surveillance data in close to 'real-time'.6 However, the decision by TSN® to withdraw from Australia in 2003 leaves us without a national passive surveillance system.

Queensland Health Pathology and Scientific Services (QHPSS) have made the provision of passive antimicrobial resistance surveillance data to clinicians within Queensland public hospitals a high priority. The purpose of passive surveillance is to provide estimates of the prevalence of resistance phenotypes based on specimens submitted to clinical laboratories. The aim of the current project is to provide timely cumulative susceptibility data to interested health care professionals at a local, regional and state level.

This paper describes the creation of comprehensive state-wide network of passive surveillance incorporating all susceptibility data generated in our laboratories and gives some examples of its reporting output.

Queensland Health Pathology Service (QHPS) consists of a hierarchical, networked system of 32 laboratories (Figure) which vary in size from small remote laboratories serving rural communities to large multi-divisional laboratories serving metropolitan tertiary referral hospitals. It provides laboratory services to all public hospitals but one in Queensland. Public hospitals in Queensland form part of health districts that in turn belong to three zones. The Northern Zone serves a population of 596,725, the Central Zone 1,365,076 and the Southern Zone 1,624,094 according to 2001 census data. 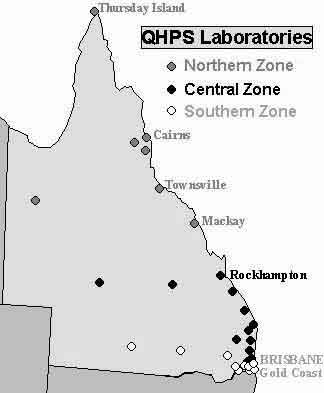 A single laboratory information system (LIS) (AUSLAB™ , PJACC, Melbourne) is networked to all laboratories from a central computer. Twenty-four of the laboratories perform antimicrobial susceptibility testing. Since July 2002, all susceptibility testing is performed according to National Committee for Clinical Laboratory Standards (NCCLS)7 or using automated methods based on NCCLS methods (Vitek®, bioMerieux, Missouri or MicroScan®, Dade Behring, Illinois). Specimen, isolate and susceptibility data ('S', 'I' or 'R' calls) are downloaded from the LIS using an 'autodump' function. A data field is included to specify the test method thus allowing data derived from any method to be captured and analysed separately if required. The raw data (strings in delimited ASCII text format) are imported into a relational database (Microsoft™ SQL Server 2000™ ) and processed through a screening algorithm to remove duplicates. Results are stored in separate tables in the relational database. Data are presented with a 3-tiered-architecture web application developed using Microsoft™ Dot Net™ technologies. A web browser is used as the user interface allowing access through the Queensland Health intranet or through remote access secure internet connection. The 'unique' isolate definition used for duplicate removal uses the following parameters: identical patient identifiers (name, patient record number, date of birth), identical organism name, identical susceptibility pattern and isolation within five days of a previous 'identical' isolate. Specimen type is also included in the algorithm from specimen category inquiries. Data from patients with multiple isolates were audited to ensure that the algorithm selected the first isolates of a particular profile and excluded all duplicates.

The database can be queried for all specimens or for particular categories of specimens. Specimens are categorised as blood, cerebrospinal fluid, ear/nose/throat, enteric, genital, respiratory, tissue/fluid/pus/prostheses, urine, infection control screening and other. Ad hoc inquiries are processed according to the following parameters: testing laboratory, health care facility, ward address, inpatient/outpatient status, zone, district year/month, organism, antimicrobial, and specimen type. Data for clinical isolates and infection control screening isolates can be analysed separately. Reports state the number of isolates tested and the percentage susceptible.8 For demonstration purposes the results reported here reflect results as recorded in the LIS. These would not necessarily have appeared in the pathology report.

Susceptibility results were available for 52,563 isolates between 1 January and 30 June 2003. The screening algorithm excluded 6.5 per cent of isolates leaving 49,169 in the active database including 48,096 clinical and 1,073 infection control screening isolates. Some of the flexible data analysis capabilities of the system are demonstrated in the tables.

Tables 1 and 2 show the susceptibilities of common gram-negative and gram-positive blood culture isolates from all laboratories respectively. The variation of the proportion of blood culture isolates of Staphylococcus aureus that were methicillin-resistant (MRSA) in the three zones is shown in Table 3. Differences in the susceptibility of inpatient and outpatient MRSA isolates at one Southern Zone hospital are seen in Table 4. The ability to differentiate between clinical and infection control screening isolates is demonstrated by data from the same hospital (Table 5). Summary data for extended spectrum beta-lactamase (ESBL) producing Klebsiella pneumoniae and vancomycin resistant enterococci (VRE) for the three zones are shown in Tables 6 and 7 respectively. Cumulative susceptibility to a variety of antimicrobials and reduced susceptibility to penicillin of Streptococcus pneumoniae isolated from sterile and non-sterile sites are shown in Table 8.

Table 1. Antimicrobial susceptibilities of the 10 most common aerobic gram-negative isolates in blood cultures in all laboratories, January to June 2003

Table 4. Antimicrobial susceptibility of inpatient and outpatient isolates of methicillin-resistant Staphylococcus aureus at a metropolitan teaching hospital, January to June 2003

Table 5. Comparison of susceptibility of all methicillin-resistant Staphylococcus aureus isolates with those from clinical specimens and those from infection control screening specimens at a metropolitan teaching hospital, January to June 2003

Table 8. Antimicrobial susceptibilities of Streptococcus pneumoniae in all laboratories, January to June 2003

We have endeavoured to display the versatility of the antibiogram software by presenting data derived from the entire state, the three Queensland Health zones and from an individual institution. The data are presented as recorded as the system does not at present include software to automatically identify improbable results. The current version of software does however provide a 'drill down' feature which allows individual anomalous results to be identified by laboratory number and testing laboratory for follow up.

We presented data concerning some key endemic and emerging resistant organisms. MRSA is of particular interest in Queensland due to the emergence of non-multiresistant strains causing severe community acquired infections.9,10 Gentamicin susceptibility has been used as a surrogate marker for these strains and Table 3 shows marked differences in the gentamicin susceptibility of MRSA in the three zones. This suggests that community strains are probably most common in the Northern Zone and least common in the Central Zone. Examination of MRSA susceptibilities at one metropolitan teaching hospital in Table 4 demonstrates that outpatient isolates are more susceptible to non-beta-lactam antimicrobials, which is also in keeping with community acquisition of non-multiresistant strains. The varying cumulative susceptibility results displayed in Table 5 demonstrate the importance of separating results of infection control screening isolates from clinical isolates when reporting cumulative susceptibilities, in this case for MRSA.

Comparison of susceptibilities of ESBL producing K. pneumoniae to cephalosporins in the three zones in Table 6 illustrates another potential pitfall in interpreting cumulative susceptibility results from different laboratories. The marked differences in susceptibility recorded here is due to differing reporting practices between laboratories: some record results as tested and suppress them while others record all as resistant and report them. Clearly, knowledge of reporting practices for organism/antibiotic combinations where susceptibility phenotypes are not reliable indicators of clinical utility, is an important element in reporting and interpreting cumulative data.

Analysis of infection control screening for VRE showed a large number of isolates of van B E. faecium in the Central Zone (Table 7). Drilling down revealed that this was due to an outbreak in one institution only. The emergence of resistance to penicillin and other antimicrobials in S. pneumoniae has been evident in Australia for over a decade.11 Table 8 shows that, while isolates from blood and CSF are, as expected, more susceptible than isolates from non-sterile sites, the proportion of resistant isolates (penicillin MIC ≥2 mg/L) from sterile sites is 6.2 per cent, which is cause for concern.

We acknowledge the contribution of the Microbiology Discipline Working Party and the Auslab Support Unit of QHPSS.

4. World Health Organization. WHO Global Strategy for the Containment of Antimicrobial Resistance. Switzerland: WHO, 2001.

12. Commonwealth Department of Health and Aged Care. The Commonwealth Government Response to the Report of the Joint Expert Technical Advisory Committee on Antimicrobial Resistance (JETACAR). Canberra: Commonwealth of Australia, 2000.