Trends in potential exposure to Australian bat lyssavirus in South East Queensland, 1996 to 2003

Australian bat lyssavirus (ABL) is a member of the Rhabdoviridae family, possessing marked similarity to classic rabies virus on both serotyping and molecular sequencing.1 To date, two cases of fatal ABL infection have been reported in Australia, one in 1996 and the second in 1998.2 The epidemiology of potential exposure to ABL has been previously described.3 The key feature, in a predominantly urban population in South East Queensland, was that potential exposures were likely to be the result of human-initiated contact by people with some professional or volunteer interest in caring for bats and/or flying foxes (53% of potential exposures). A lower proportion of potential exposures (35%) were reported by members of the general community.

Potential exposures to ABL continue to occur despite consistent information and reminders to the community about the dangers of handling flying foxes and insectivorous bats.4 This paper examines population trends in potential exposure to ABL reported to the Brisbane Southside Public Health Unit (BSPHU) between 1 November 1996 and 31 January 2003.

Since 1 November 1996, all persons reporting a potential exposure to ABL have been asked to complete a standard questionnaire. The details of the questionnaire, methods of study and results until 31 January 1999, have been described.3 However, the geographic boundaries of the area served by the BSPHU have changed since 1999. They now include South Brisbane (part of the Brisbane City Council Area), Logan, Redlands, Ipswich, Laidley, Boonah and Esk Local Government Areas (Figure) with an estimated resident population of 920,680 as at 30 June 2000.5 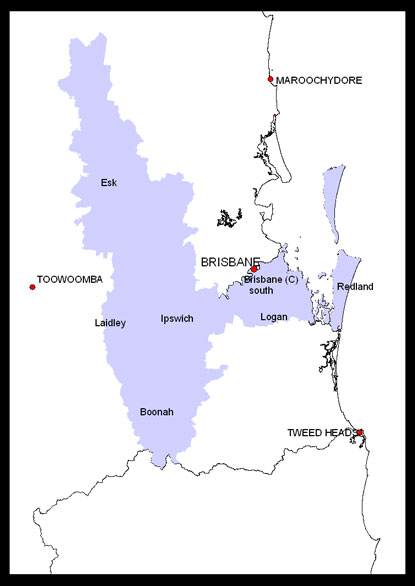 The time frame of this study was divided into period 1 (the initial study period from 1 November 1996 to 31 January 1999, which included the two human cases of ABL infection) and period 2 (1 February 1999 to 31 January 2003). To allow comparison of data across these time periods, the original study data was restricted to include only that related to people who resided within the current Brisbane Southside Public Health Unit boundaries. SPSS version 11.5 was used for analysis.6

* Percentages may not total 100 because of missing values.

The notification rate of potential exposure to ABL fell markedly during the study. This rate may more accurately estimate baseline potential exposure rates since earlier rates were inflated by the large number of retrospective reports received after the initial recognition of this disease in humans in 1996. However, it is possible that a proportion of recent potential exposures are not being notified. This may arise from waning concern about the risks of bat bites or scratches among the community or medical profession, especially as no cases of human ABL infection have been reported since 1998.

Professional handlers and volunteer bat carers may be unwilling to notify potential exposures within their groups, a reluctance that has been communicated to both authors. This unwillingness may be an undesired consequence of the public health requirement to euthanase and test all bats involved in human potential exposures. Unwillingness to notify potential exposure may also reflect preformed opinions about the risk posed by scratches, the protection afforded by pre-exposure vaccination, or the level of risk associated with the clinical appearance of the bat. These suggestions are further supported by the finding that volunteer bat carers have the largest decrease in proportion of notifications from time period 1 to period 2 [36% (n=49) to 11% (n=12)], with a corresponding increase in community notifications [40% (n=54) to 71% (n=78)], despite no recognisable change to volunteer bat carer numbers in the Brisbane Southside area over recent years (personal communication, Allan McKinnon, Manager, Moggill Koala Hospital, Queensland Parks and Wildlife Services).

The time between potential exposure and notification decreased substantially over the study, with fewer long-term retrospective reports of potential exposure in period 2. A corresponding decrease was observed in the proportion of people requiring treatment after their potential exposure. Post exposure treatment may be delayed for 48 hours pending the results of tests on the bat involved.7 In period 2, potential exposures were notified more promptly. This allowed a greater proportion of the bats involved to be tested and the negative results to be obtained within the required 48 hours. This represented an important cost saving through the reduced use of rabies immune globulin (RIG), rabies vaccine and fewer doctors' visits.

Future public health messages should continue to emphasise the need for the community to maintain a safe distance from all bats or flying foxes, even if they are orphaned or distressed. Messages should reinforce that it is usually impossible for an untrained person to handle a bat without sustaining a bite or scratch, even if protective measures are used. Members of the public can be of most help to orphaned or injured bats by contacting a trained, vaccinated bat handler. Volunteer bat carers must also be aware of the potential risks associated with bites or scratches from apparently healthy looking bats, and seek medical advice regardless of their pre-exposure prophylaxis or the nature of the wound.