Scrub typhus in the Northern Territory: exceeding the boundaries of Litchfield National Park

This report published in Communicable Diseases Intelligence, Volume 28, Number 2 discusses scrub typhus in patients with a history of travel to Litchfield National Park in the Top End of the Northern Territory. All confirmed scrub typhus cases to date from the Northern Territory have visited the Park, but the presence of similar rainforest pockets elsewhere in the Top End suggested further infectious locations might be identified with increased tourism.

Scrub typhus is recognised as an important differential diagnosis of fever, rash and sepsis in patients with a history of travel to Litchfield National Park in the Top End of the Northern Territory. All confirmed scrub typhus cases to date from the Northern Territory have visited the Park, but the presence of similar rainforest pockets elsewhere in the Top End suggested further infectious locations might be identified with increased tourism. We report a case of serologically confirmed Orientia tsutsugamushi infection in a man who had not been within Litchfield Park, but had visited another discrete Top End rainforest area. Commun Dis Intell 2004;28:267-269.

Scrub typhus often occurs in recognised 'mite islands', well-circumscribed foci where mite hosts (usually endemic rodents in Australia) are infected with the mite (Leptotrombidium deliense in Australia), which in turn is infected with Orientia tsutsugamushi, the rickettsial pathogen.1

Such foci are recognised in the high rainfall areas of Far North Queensland, the Torres Strait Islands,2 and Litchfield National Park south of Darwin, Northern Territory, which opened to the general public in 1986.1 Ten cases of scrub typhus, one fatal, have been confirmed serologically amongst people visiting Litchfield National Park since 1990 (Bart Currie, unpublished data), although cases had been suspected in the Top End of the Northern Territory from as early as 1937.3 The 'Litchfield' strain of O. tsutsugamushi has been isolated and characterised as molecularly quite distinct from Australian strains found in north Queensland and from others in South East Asia.3 A single case of scrub typhus has been reported from a remote location in the Kimberley area of Western Australia4 and it was predicted that, as humans encroach on other remote rainforest locations in the tropical north, further foci with potential to transmit scrub typhus would be identified.1

A 40-year-old male was referred to the Royal Darwin Hospital with increasing headache, fever and malaise over 10 days. He had made a day trip for recreational shooting to the Woodcutters Mine reserve 12° 59' latitude, 131° 06' longitude, 70 km SSE of Darwin, eleven days prior to onset of symptoms. He had not been to Litchfield National Park. He did not have any other relevant travel history or infectious contacts, or past medical problems. Symptoms began with headache, and progressed over the next 10 days to include lethargy, fever, anorexia, vomiting, myalgia and rash. On examination, he was prostrate and febrile with a temperature of 39.9° C. He had a maculopapular rash affecting the upper arms and trunk, and conjunctival icterus and injection. He had crepitations and bronchial breath sounds bi-basally. He had a tender liver edge although the liver span was normal. He had a small healing wound 12 x 5 mm in diameter, in the left inguinal area, consistent with a healing eschar but without a central black crust. Laboratory tests revealed mixed pattern hepatitis with bilirubin 45 µmol/L (0 to 20 µmol/L), alkaline phosphatase 325 U/L (39 to 117 U/L), alanine transferase 223 U/L (5 to 44 U/L), gamma glutamyl transferase 391 U/L (0 to 66 U/L). Further results included C-reactive protein 222 mg/L (0 to 8 mg/L), white cell count 11.1 x 109 /L (4 to 11 x 109 /L), neutrophils 9.2 x 109 /L (2 to 7.5 x 109 /L), haemoglobin 118 x 109 /L (135 to 185 g/L), platelets 201 x 109 /L (150 to 450 x 109 /L), creatinine 77 µmol/L(60 to 120 µmol/L) and creatine kinase 18 U/L (0 to 220 U/L). Cerebrospinal fluid contained 8 x 106 leucocytes per litre (95% mononuclear cells) with no erythrocytes. Chest radiography demonstrated bilateral lower lobe consolidation.

Within 24 hours he was afebrile, and he was discharged five days later. Mild headache and lethargy persisted, but he had recovered and returned to work after being reviewed six weeks later.

Indirect fluorescent antibody test for O. tsutsugamushi with sera processed in parallel demonstrated a significant rise in titre from <128 one week prior to hospital admission, to 1:512 four weeks later, confirming the diagnosis of scrub typhus. Blood cultures including culture for leptospirosis, and other serological tests including leptospirosis, HIV, hepatitis viruses, Epstein Barr virus and atypical respiratory pathogens were negative.

The Woodcutters Mine area is only 20 km from the boundary of Litchfield Park, but the rainforest habitats in the Woodcutters area are in the Coomalie Creek system which drains east to the Adelaide River system, while the Litchfield Park area drains from the elevated sandy and sandstone plateau of the Tabletop Range to the Reynolds River to the west and the Finnis River system to the east and north. Tributaries of the left branch of Coomalie Creek, which runs through the Woodcutters Reserve area, drain the same hills as some tributaries of the Finnis River, providing a close link to the two river systems. The upper reaches of these tributaries are however relatively steep, well drained, and sparsely vegetated, and dry soon after the finish of wet season rains.

The rainforest areas in Litchfield Park are primarily at the edge of the Tabletop range escarpment and are closely associated with creeks and seepage areas that drain from the escarpment to the Reynolds River or the Finnis River tributaries such as Florence Creek and Walkers Creek. These rainforest areas are discrete and characterised by emergent Carpentaria acuminata palms and are generally subject to perennial spring flow or seepage.

The rainforest areas in the Woodcutters area are botanically similar to Litchfield Park, and are also associated with perennial creek flow. A feature of the rainforest patches in both areas is the close proximity to perennially damp grassland and sedge areas that are probably an important element of the rodent-mite-Orientia ecology.7 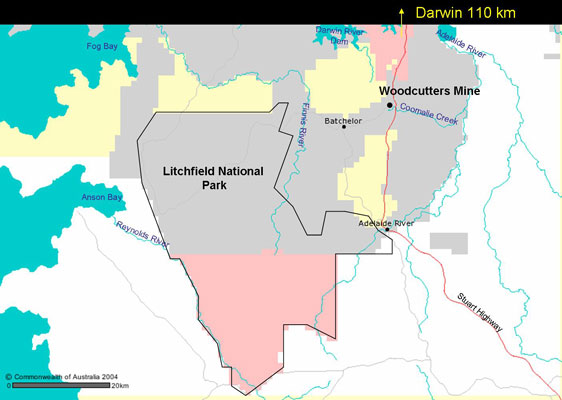 Between the two locations there are however, large areas of open woodland savanna where dry season conditions with low humidity make a conjoining region of rodent-mite-Orientia cycles unlikely. The Woodcutters focus is therefore likely to be another discrete, stable location for potential scrub typhus transmission.

The severity of scrub typhus (50-60% mortality without antibiotics in some studies8 ), and failure to respond to conventional antibiotics, make early diagnosis of the illness and institution of appropriate treatment essential. The earlier Northern Territory fatality from scrub typhus acquired in Litchfield Park was associated with delayed diagnosis and treatment.3 This case highlights the need to maintain a high index of suspicion for scrub typhus in the presence of a travel history to a high rainfall area anywhere in tropical northern Australia, especially remote rainforest areas, even though the region may not as yet be recognised as an area of O. tsutsugamushi transmission.