The Victorian Department of Human Services is responsibile for influenza surveillance within Victoria. This annual report discusses influenza activity in Victoria during 2004.

Influenza activity during the traditional Victorian influenza season from May to October 2004 was low with no well-defined peak. Surveillance was based on sentinel general practice influenza-like illness (ILI) notification with laboratory confirmation, locum service ILI notification and laboratory reporting of influenza detections. Eight hundred and fifteen consultations for ILI were reported from 38 general practices and 216 consultations for ILI were reported from the locum service. The average weekly rate of influenza-like-illness from sentinel surveillance was 5.4 cases per 1,000 consultations, representing normal seasonal activity. Influenza A (h4N2) was the predominant circulating sub-type, 88 per cent of which were identified as A/Fujian/411/2002-like and 12 per cent as A/Wellington/1/2004. All influenza B was B/Shanghai/361/2002-like. There was some mismatch with the 2004 influenza vaccine, which contained A/New Caledonia/20/99(h2N1)-like virus, A/Fujian/411/2002(h4N2)-like virus, and B/Hong Kong/330/2001-like virus. Commun Dis Intell 2005;29:71–76.

The objectives of the influenza surveillance system are to identify the onset, duration and relative magnitude of annual influenza seasons in Victoria; to characterise the circulating influenza strains in the community; and to assist with the early detection of influenza epidemics to facilitate the implementation of public health measures. This report describes influenza surveillance in Victoria for 2004, including some comparisons with previous years.

Recruitment of general practitioners (GPs) aimed for approximately one sentinel practice for every 200,000 population in metropolitan Melbourne and one practice for every 100,000 population in rural areas.3 GPs were rewarded for participation with Continuing Professional Development (CPD) points from the Royal Australian College of General Practitioners. The allocation of these points was dependent on the submission of five swabs from patients with an ILI throughout the season, regular weekly submission of tally sheets and the completion of an evaluation questionnaire.

GPs were required to report weekly on the number of patients presenting with ILI and their total number of consultations. ILI was defined according to the case definition of fever (or history of feverishness), cough and fatigue/malaise.4 A standard data collection form was used to record age, sex and vaccination status.

Rates for ILI were analysed on a weekly basis, with ILI calculated per 1,000 consultations. Overall ILI activity for the year was described using a set of threshold values. Normal baseline yearly activity was <2.5 ILI cases per 1,000 patients/week; normal seasonal activity was between 2.5–15; higher than normal was >15–35 and epidemic activity was above >35.5

In addition to ILI data collection, each GP was asked to send respiratory specimens (nose and throat swab collected into viral transport medium) from patients who presented within three days of onset of ILI symptoms. GPs were required to send in a minimum of five specimens during the influenza season. These specimens were transported to VIDRL by a dedicated courier from metropolitan practices and through a network of commercial pathology laboratories from regional and rural practices. Data on age, vaccine status, date of illness onset and the GP’s clinical impression of the likelihood of influenza (almost certain, probable or less likely) were forwarded with each sample.

Specimens were tested at VIDRL using an in-house respiratory multiplex polymerase chain reaction (PCR). In previous years the assay identified influenza A (h4N2 and h2N1), influenza B, adenovirus, picornavirus (enterovirus and rhinovirus), respiratory syncytial virus (RSV) and parainfluenza viruses.6 In 2004, oligonucleotide primers to detect all known influenza viruses replaced primers aimed specifically at currently circulating h2 and h4 sub-types. Aliquots of all specimens positive for influenza were forwarded to the WHO Collaborating Centre for Reference and Research on Influenza, Parkville, Melbourne, for virus strain typing.

ILI surveillance using data from the Melbourne Medical Locum Service (MMLS) commenced in 2003. MMLS provides a 24-hour, seven days a week medical locum service to patients within an approximate 40-kilometre radius of metropolitan Melbourne. Data are collected on cases with a final diagnosis reference to ‘flu’ or ‘influenza’. For MMLS surveillance, data were collected all year and ILI rates were calculated per 1,000 consultations with the total number of call-outs per week as the denominator.

Sentinel surveillance data from the community were supplemented with weekly reports of laboratory-confirmed influenza from The Royal Children’s Hospital, Monash Medical Centre and The Alfred Hospital. Diagnostic specimens other than specimens tested as part of surveillance at VIDRL were also included. These four laboratories undertake all laboratory diagnoses of influenza in Victoria and report all confirmed cases of influenza identified by virus isolation, direct detection of viral antigen or detection of viral RNA by nucleic acid assays.

All data from sentinel surveillance, laboratories and MMLS were collected and collated weekly. ILI surveillance data were forwarded to the Commonwealth Department of Health and Ageing weekly and summary reports were prepared fortnightly and on an annual basis. Reports were widely distributed to interested health professionals, participating GPs and state and commonwealth departments of health. They were also posted on the VIDRL web site (http://www.vidrl.org.au).

Pilot study of influenza among patients in the paediatric Emergency Department.

This year, additional specimens (combined nose/throat swabs) for laboratory testing were collected from patients presenting to the Royal Children’s Hospital (RCH) Emergency Department (ED) as part of a pilot study examining influenza in children. The aims of this study were to determine the extent of, and risk factors for, influenza among children attending the ED of the RCH and to collect data to enable health related costs of influenza in children to be estimated.

The RCH Human Research Ethics Committee granted ethics approval for the study. Provision of informed consent by participants was necessary to comply with requirements of the ethics committee. Patients were eligible to participate if they presented at the ED with a respiratory illness and were assigned triage category 1 to 4 (1 is the most serious illness) and aged between 6 months and 16 years. A one page clinical history and presentation questionnaire was completed for all ED participants. Nose and throat swabs collected from ED participants were sent directly to VIDRL and tested by multiplex respiratory PCR, and for human coronavirus OC43, 229E and metapneumovirus by separate PCR assays.

Figure 1a. Distribution of sentinel surveillance sites in metropolitan Victoria 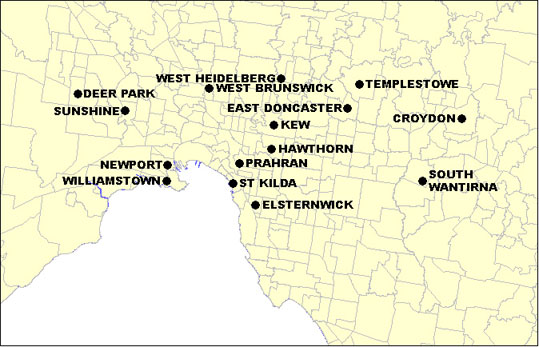 Figure 1b. Distribution of sentinel surveillance sites in rural Victoria 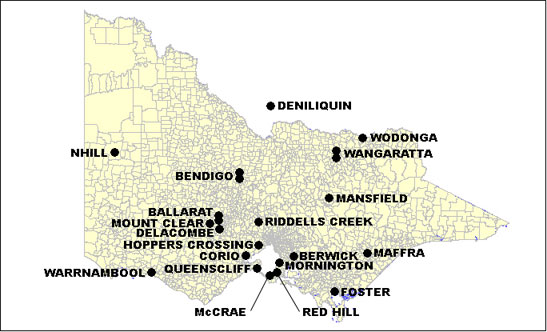 In comparison to previous years, influenza activity in 2004 was low with no distinct peak (Figure 3). Activity was at baseline from week 18 to 20 in 2004 before rising marginally to reach a weekly consultation rate peaking at 8.5 cases per 1,000 cases, which coincides with normal seasonal activity. Surveillance was extended for an additional week (week 40) in response to continued influenza activity interstate and ongoing low-level circulation in Victoria.

A total of 283 specimens were sent to the laboratory from patients with ILI. Sixteen were inhibitory to the assay and were not included in further analysis. Of the 267 specimens remaining, influenza A was detected in 37 (13.9%) and influenza B in 11 (4.1%) specimens. Aliquots of positive influenza samples were sent to the WHO Collaborating Centre for Influenza for virus strain typing. Eighty-eight per cent of influenza A samples were A/Fujian/411/2002-like and 12 per cent were A/Wellington/1/2004. All influenza B samples tested were B/Shanghai/361/2002-like. Of the specimens received from sentinel surveillance 79 (30%) were positive for other respiratory viruses. The most common viruses detected were picornavirus and RSV (Figure 4).

Influenza among patients in the paediatric Emergency Department

A total of 21 specimens were collected from children aged 0–12 years presenting with respiratory symptoms to the RCH ED. Influenza was detected from 3/21 (14%) specimens; one Influenza A and two influenza B. An alternative respiratory virus was detected in an additional 10 (48%) specimens, giving a total virus detection rate of 62 per cent (Figure 7). No patients were positive for human metapneumovirus or any coronaviruses. Cost of illness was not estimated for the few patients in the pilot study.

Figure 7. The distribution of respiratory viruses detected in the samples collected from the Emergency Department, Royal Children’s Hospital

Influenza activity during the traditional influenza season from May to October 2004 was low with no clearly defined peak. The predominant circulating influenza was sub-type A (h4N2), most of which were identified as A/Fujian/411/2002-like. This strain had circulated extensively in Victoria during the 2003 season prompting its inclusion in the 2004 vaccine. In addition, the influenza vaccine for 2004 contained A/New Caledonia/20/99(h2N1)-like virus and B/Hong Kong/330/2001-like virus.7 However there was some vaccine mismatch with circulating strains, with the emergence of A/Wellington/1/2004 (h4N2)-like strain later in 2004 and all of the influenza B cases being due to B/Shanghai/36112002-like strains, which had not been included in the vaccine. The A/Wellington and B/Shanghai strains have both been recommended for the 2005 influenza vaccine, which will also include an A/New Caledonia/20/99 (h2N1)-like strain.8

The data received from MMLS reflected that of metropolitan sentinel surveillance with no seasonal peak. MMLS data included any diagnosis of influenza or flu and, although not consistent with the national case definition for ILI, provided timely supplementary surveillance. Data could be accessed daily from a password protected section of the MMLS website, providing up-to-date ILI figures, whereas sentinel surveillance data were obtained weekly for the previous week. MMLS data are currently used as a supplementary source of surveillance data but have the potential to replace sentinel general practice surveillance, given the consistency of retrospective and prospective comparisons.9 However, sentinel general practice patients will continue to provide a sample of circulating influenza strains, which contribute to deliberations about annual vaccine composition.

To comply with the ethics committee informed consent requirements in the pilot study at RCH, a three-page plain language statement and two-page signed consent form had to be completed by each patient or patient’s guardian. Several families, when faced with these forms, declined to participate. The ED nursing staff found the length of time needed to discuss the content of the forms and obtain consent inappropriate to manage within their routine duties. Moreover it was thought that the difficulties associated with these forms were likely to be exacerbated during a season of high influenza activity. An alternative approach to continue this study is being developed.

It is important to gather Australian data on influenza in children, given that there is ecological evidence from Japan that vaccinating children against influenza protects the wider community10 and that United States of America authorities have recently recommended annual influenza vaccination of children aged 6–23 months.11 It is possible to gather such data in the context of ongoing routine influenza surveillance.

The sentinel influenza surveillance program would not be possible without the ongoing support of the participating general practitioners and their practice staff. Staff of the Viral Identification Laboratory at VIDRL performed all PCR testing. We thank the three metropolitan hospitals for their cooperation and contribution of laboratory diagnosed influenza data and the WHO Collaborating Centre for provision of influenza strain identification. Our thanks also go to the Melbourne Medical Locum Service for sharing their data with us. We also acknowledge the private pathology providers who facilitate transport of respiratory specimens from rural and regional general practices. The influenza surveillance program is partially supported by the Department of Human Services, Victoria. The study of influenza in patients in the paediatric Emergency Department was made possible through a research grant funded by the Medicines Australian Vaccine Industry Group and the support of RCH ED staff.

This article was published in Communicable Diseases Intelligence Vol 29 No 1 March 2005.