A preventable illness? Purulent pericarditis due to Streptococcus pneumoniae complicated by haemolytic uraemic syndrome in an infant

This report describes a case of pericarditis in an infant, which was due to Streptococcus pneumoniae and further complicated by haemolytic uraemic syndrome.

A previously healthy eight-month-old infant presented with shortness of breath and pyrexia. He was found to have purulent pericarditis due to Streptococcus pneumoniae, complicated by acute renal failure due to haemolytic uraemic syndrome. He received peritoneal dialysis and recovered with normalisation of renal function. This case highlights two important complications of pneumococcal infection in one individual and illustrates the need for rapid diagnosis and treatment of invasive pneumococcal disease. It is anticipated that introduction of the conjugate pneumococcal vaccination to the Australian Standard Vaccination Schedule from 2005 will reduce the incidence of pneumococcal infection and its associated morbidity and mortality. Commun Dis Intell 2005;29:77–79.

Streptococcus pneumoniae (pneumococcus, S. pneumoniae) colonises the oropharynx of 5 to 10 per cent of healthy adults and 20 to 40 per cent of healthy children.1 Invasive pneumococcal disease (IPD) is defined as the isolation of S. pneumoniae from a normally sterile site such as blood, cerebrospinal or pleural fluid. Based on surveillance data from 2002, the incidence of IPD in Australia across all ages was 11.5 per 100,000 population with the highest incidence among children aged less than five years.2 Children with IPD are most likely to present with bacteraemia, meningitis or pneumonia2,3,4 and most of those aged less than five years do not have an identifiable risk factor (such as prematurity or chronic illness).2 An unusual presentation of IPD of an infant with infective pericarditis, complicated by haemolytic uraemic syndrome (HUS), is described below. To date, the combination of pneumococcal pericarditis and HUS has not been reported in one individual.

A previously healthy eight-month-old boy of Pacific Island descent presented to the emergency department with a three day history of fever and increasing shortness of breath. Intake of formula and solids was significantly reduced. He was born at full term by normal delivery, was fully immunised according to the routine schedule and had achieved age-appropriate developmental milestones. On examination he weighed 11.6 kg (>97 th centile) and was pyrexial at 38.4 degrees Celsius. He was moderately dehydrated with dry mucous membranes, and was lethargic but alert. Heart rate was 195 beats per minute, blood pressure 120/70 mmHg, he was well perfused and did not have a cardiac murmur or peripheral oedema. Respiratory rate was 75 breaths per min, he had marked intercostal recession and chest was clear to auscultation. 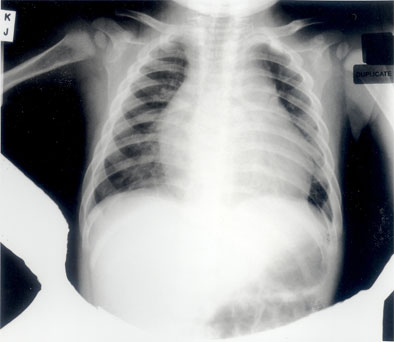 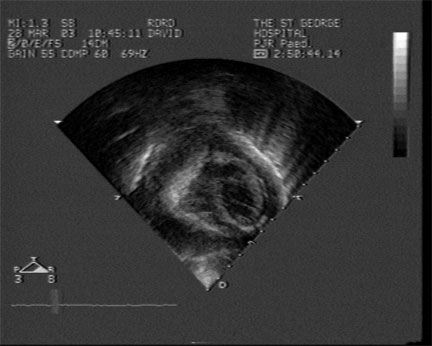 The infant’s condition deteriorated over the subsequent 12 hours. He became anuric, oedematous, hypotensive and tachycardic. Further investigations demonstrated thrombocytopenia, anaemia, elevated D-dimers and a microangiopathic blood film in association with acute renal failure. Haemoglobin and platelet count decreased to 49 g/L and 13x 10 9/1 respectively, while creatinine and urea increased to 383 umol/L and 41.8 mmol/L. Findings were consistent with a diagnosis of HUS secondary to IPD. Direct Coombs test was positive, complement and immunoglobulin levels were normal and human immunodeficiency virus 1/2 antibodies were negative. Renal ultrasound demonstrated large bilateral echogenic kidneys with no pelvicalyceal dilatation or perinephric collection.

Management consisted of blood and platelet support and peritoneal dialysis, which was continued for 12 days. The infant remained in the intensive care unit for one week, his deranged liver function tests normalised over 10 days, and he was discharged home after four weeks with a creatinine of 57 umol/L. Renal function normalised over the next two weeks. He received four weeks of intravenous benzylpenicillin in total, in view of evidence of pneumococcal pericarditis on biopsy. He also received the 7-valent pneumococcal conjugate vaccine (7vPCV) before discharge and a further dose two months later.

S. pneumoniae is now the most common bacterial pathogen causing sepsis in infants less than two years. The incidence of IPD in children aged less than two years was more than 160 per 100,000 per year in the United States of America,5 whereas reported rates in Australia in this age group range from 96.4 per 100,000 in New South Wales6 to 193.4 per 100,000 in the Australian Capital Territory.4 A higher incidence has been reported in Maori and Pacific Islanders7 and the risk IPD was more than 10-fold higher in Aboriginal children aged less than four years in Central Australia.8

Pneumococcal pericarditis is a rare but recognised presentation of IPD and pneumococcal infection is a rare cause of purulent pericarditis.9,10,11 Management involves a combination of early surgical drainage due to the acute life threatening nature of the illness, along with appropriate antimicrobial therapy. Based on empirical evidence the duration of intravenous therapy is at least three to four weeks.

Non-diarrhoeal HUS is a rare but severe complication of IPD. Its pathophysiology differs from the classical form of diarrhoeal associated HUS, which is most commonly associated with Escherichia coli 0157. It is associated with a higher rate of mortality and morbidity in contrast to diarrhoeal HUS.12 In a retrospective series of 12 children with IPD and HUS, pneumonia and meningitis were the most common precipitating illnesses. 12 Children were significantly younger, were more likely to require dialysis and had a longer duration of hospitalisation than those with diarrhoeal HUS. Long term follow-up was available for seven children; two progressed to end stage renal failure and five had normal renal function. Based on data from the Australian Paediatric Surveillance Unit , non diarrhoeal HUS occurred in 14/98 cases of HUS reported over a four year period, of which three were associated with pneumococcal infection.13

Serotype 14, identified in this case, is more likely to be associated with IPD in children.14 The 7vPCV containing capsular polysaccharide is now an effective immunisation for children as it is immunogenic from six weeks of age. Indeed, this child received the 7vPCV despite this episode of IPD as prophylaxis towards other vaccine strains of S. pneumoniae. In 2000, the 7vPCV was introduced to the routine childhood vaccination schedule for infants over one year of age in the United States of America. Following its introduction the incidence of IPD due to vaccine serotypes declined by 78 per cent, and the greatest decrease was in children under two years.15 The 7vPCV has been licensed in Australia since 2001 and has recently been included on the Australian Standard Vaccination Schedule for all children aged less than two years. Clearly, a reduction in the incidence of IPD and its associated morbidity and mortality is an important goal of this vaccine.

Pneumococcal disease remains an important public health problem in Australian children. This case illustrates the importance of rapid diagnosis and prompt treatment of suspected IPD, and emphasises the importance of recognising the serious complications of IPD. Children with IPD and severe haematological or renal abnormalities should be investigated for evidence of HUS. International evidence continues to support the efficacy of this vaccine in reducing the incidence of IPD. Surveillance measures by laboratory notification are already in place in Australia enabling monitoring of the impact of the new vaccine on the incidence of IPD due to non-vaccine serotypes.

Statement of competing interests: none identified.

The authors would like to thank Dr P Palasanthiran and Dr A Rosenberg for their constructive comments and advice and Dr J Ayre for his assistance in preparing the clinical record. Dr P Robinson participated in the management of this patient.

This article was published in Communicable Diseases Intelligence Vol 29 No 1 March 2005.