This report describes a case of cholera in a woman who had recently arrived in Australia from Nairobi. The report was published in Communicable Diseases Intelligence Volume 30, Number 2, June 2006

A 71-year-old Burundian woman presented to The Monash Medical Centre emergency department in March 2005. She described two days of lethargy, profuse diarrhoea and vomiting but denied fevers, or other symptoms. The following travel history was obtained. Upon receiving a Special Humanitarian Program visa to Australia, her family was translocated to an United Nations High Commissioner for Refugees (UNHCR) processing centre from a refugee camp in rural Tanzania, then onto Nairobi, Kenya. Her gastrointestinal symptoms commenced as they began their journey from Nairobi. The family travelled with 45 other refugees on a commercial flight to Australia and arrived 36 hours before presentation at the emergency centre. The patient’s daughter-in-law developed similar, but milder, symptoms of diarrhoea during the flight and was also admitted to our hospital.

On examination, she was afebrile but tachycardic with blood pressure of 85/45 mmHg. Tissue turgor was markedly reduced, with dry mucous membranes and sunken eyes. The remainder of her examination was unremarkable. An ECG revealed sinus tachycardia and prolonged QTc interval and her biochemistry showed potassium of 2.5 mmol/L (3.5–5.0), creatinine of 0.32 mmol/L (0.04–0.12) and metabolic acidosis, with bicarbonate of 12.2 mmol/L (22–32).

Initial management was directed at treatment of her hypovolemic shock with intravenous fluid resuscitation, and potassium replacement. As suspicion for cholera was high, specific cholera culture from faecal specimen was performed. The Victorian Department of Human Services was notified with a presumptive diagnosis of cholera. 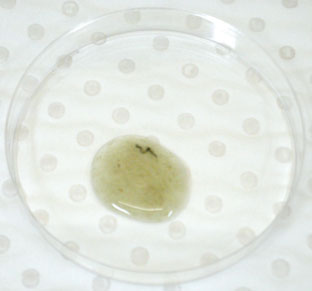 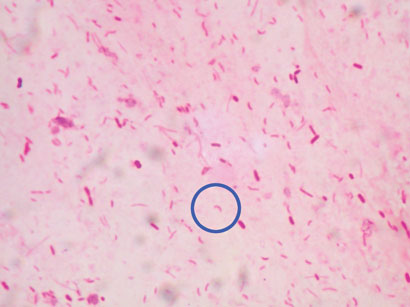 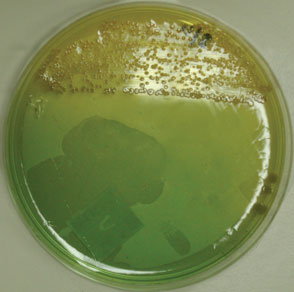 Management continued with fluid and electrolyte repletion. Doxycycline was commenced. This patient was also diagnosed with intestinal hookworms, Escherichia coli cystitis, and penicillin-resistant Streptococcus pneumoniae bronchitis. Notably, the patient was HIV antibody negative. On day six, both patients were discharged. Prior to leaving, they celebrated their survival of this deadly disease by performing a traditional dance of life to thank the treating staff.

Of the 45 passengers who travelled with our patients, none reported any diarrhoeal symptoms. Four were subsequently diagnosed with Plasmodium falciparum malaria.

Cholera is a diarrhoeal disease caused by Vibrio cholerae. It is one of the few conditions requiring notification to the World Health Organization under the International Health Regulations.1

The mode of cholera transmission is via ingestion of contaminated food or water. The incubation period of cholera is short, with symptoms commencing within hours to five days after exposure. Most cases of infection are asymptomatic with less than 20 per cent of infections progressing to cholera gravis. This is characterised by profuse diarrhoea and vomiting, without fever. An excerpt from Dr John Snow’s treatise describes the symptoms of the ensuing and often fatal dehydration: ‘Loss of water from the blood…causes many of the symptoms of a true haemorrhage, as debility, faintness, and coldness’.2 Death can occur within hours due to complications such as hypokalemia, arrhythmias, hypoglycaemia, acute renal failure and metabolic acidosis.

Overall mortality if untreated is at least 50–70 per cent, and higher in pregnant women and children. Recognising the above, treatment for suspected cholera should begin before laboratory identification of the causative organism is available. The laboratory must be notified in suspected cholera for biosafety reasons and the requirement for selective medium to culture the organism.

Cholera is readily treatable (Box). The aim is to replace lost fluids and electrolytes promptly. Fluid repletion does not need to be parenteral unless the patient is intolerant of oral intake or severely dehydrated. Anti-diarrhoeals are not advised. Antibiotics are adjunctive to fluid replacement and have been shown to reduce the volume of diarrhoea and the duration of Vibrio excretion.3 The latter effect is used to aid control of an outbreak. Tetracyclines are the drugs of choice, with quinolones and macrolides as alternatives in children, and pregnant women.3,4

Despite the ease of treatment in sporadic cases, cholera remains a global threat and is one of the key indicators of social development. The World Health Organization estimates at least 5.5 million cases of cholera occur worldwide each year, with more than 100,000 deaths.5 West Africa reported a recent large outbreak with 31,259 cases and 517 deaths, and spreading to Central Africa.6 This is an under-estimate due to the lack of surveillance data. While cholera no longer poses serious threat to countries with minimum standards of hygiene, it remains a challenge to countries where safe drinking water and adequate sanitation cannot be guaranteed. As well as high mortality, cholera causes significant socioeconomic loss, particularly in regions of endemicity in Asia, Central Europe and Africa.

Cholera is an uncommon diagnosis in Australia, with less than 10 cases reported annually in the last decade. The majority of cases were imported. In Victoria, from 1995–2003 there were five cases, acquired in Bali (2 cases), India, Vietnam and Indonesia or Singapore.

Cases related to rivers on the east coast of Australia have been reported.7,8 Cholera should be suspected in travellers who develop severe diarrhoea and dehydration. The Victorian Health (Infectious Disease) Regulations 2001 require suspected cholera cases to be notified by telephone prior to laboratory confirmation.9 Contacts of the index case are followed up for five days from the last exposure to the index patient. Chemoprophylaxis and vaccination are not recommended.

Australia has increased its refugee intake as part of UNHCR’s Special Global Program (now averaging 13,120 annually). Refugees often come from regions of poor sanitation. These factors place them at high risk of acute and chronic infectious diseases including cholera. Despite pre-migration screening, schistosomiasis, HIV, tuberculosis, and falciparum malaria are commonly diagnosed for the first time post-migration. As a result, post-migration screening for infectious diseases is recommended but may not occur.

Health providers can expect significantly increased presentations of untreated medical and psychological diseases in refugees. Familiarisation with imported conditions is vital to provision of appropriate health care to new immigrants. Diseases prevalent to Africa and the Middle East are particularly important as new intake from these areas now account for 65 per cent and 24 per cent of total respectively.10

We would like to thank Communicable Diseases, Department of Human Service, Victoria.

5. Cholera. WHO Report on Global Surveillance of Epidemic-Prone Infectious Diseases. 2000.

This report was published in Communicable Diseases Intelligence Vol 30 No 2, June 2006.