The National Notifiable Diseases Surveillance System monitors the incidence of an agreed list of communicable diseases in Australia. This report analyses notifications during 2011.

State and territory health departments collect notifications of communicable diseases under their respective public health legislation. In September 2007, the National Health Security Act 20071 received royal assent. This Act provides a legislative basis for and authorises the exchange of health information, including personal information, between jurisdictions and the Commonwealth. The Act provides for the establishment of the National Notifiable Diseases List,2 which specifies the diseases about which personal information can be provided. The National Health Security Agreement,3 which was signed by Health Ministers in April 2008, establishes the operational arrangements to formalise and enhance existing surveillance and reporting systems, an important objective of the Act. Under the Agreement, in 2011 states and territories forwarded de-identified data on the nationally agreed set of 65 communicable diseases to the Australian Government Department of Health for the purposes of national communicable disease surveillance, although not all 65 diseases were notifiable in each jurisdiction. Data were updated electronically from states and territories, daily or several times a week. The system was complemented by other surveillance systems, which provided information on various diseases, including four that are not reported to National Notifiable Diseases Surveillance System (NNDSS) (HIV, AIDS and the classical and variant forms of Creutzfeldt-Jakob disease (CJD)).

In 2011, the NNDSS core dataset included the following 5 mandatory data fields: unique record reference number; notifying state or territory; disease code; confirmation status and the date when the jurisdictional health department was notified (notification receive date). In addition, the following core but non-mandatory data fields were supplied where possible: date of birth; age at onset; sex; Indigenous status; postcode of residence; disease onset date; date when the medical practitioner signed the notification form (notification date); death status; date of specimen collection; and outbreak reference number (to identify cases linked to an outbreak). Where relevant, information on the species, serogroups/subtypes and phage types of organisms isolated, and on the vaccination status of the case were collected and reported to the NNDSS. Data quality was monitored by the Office of Health Protection and the National Surveillance Committee (NSC) and there was a continual process of improving the national consistency of communicable disease surveillance through the daily, fortnightly and quarterly review of these data.

While not included in the core national dataset, enhanced surveillance information for some diseases (invasive pneumococcal disease, hepatitis B, hepatitis C, tuberculosis and some sexually transmissible infections) were reported from states and territories to NNDSS but not included in this report. These data, along with influenza enhanced data, are reported in individual annual reports. Additional information concerning mortality and specific health risk factors for some diseases were obtained from states and territories and included in this annual report.

The surveillance for the classical and variant forms of CJD in Australia has been conducted through the Australian National Creutzfeldt-Jakob Disease Registry (ANCJDR) since its establishment in October 2003. CJD is a nationally notifiable disease and by June 2006, CJD was notifiable in all states and territories. Further surveillance information on CJD can be found in surveillance reports from the ANCJDR.5

Information on communicable disease surveillance is communicated through several avenues. The most up-to-date information on topics of interest is provided at the fortnightly teleconferences of the Communicable Diseases Network Australia (CDNA). A summary of these reports is available on the CDNA web site (http://www.health.gov.au/internet/main/publishing.nsf/Content/cdnareport.htm). The Communicable Diseases Intelligence (CDI) quarterly journal publishes surveillance data, annual surveillance reports, short reports, and articles on the epidemiology and control of communicable diseases.

Notification rates for each notifiable disease were calculated using the estimated 2011 mid-year resident population supplied by the Australian Bureau of Statistics (Appendix 1 and Appendix 2).6 Where diseases were not notifiable in a state or territory, national rates were adjusted by excluding the population of that jurisdiction from the denominator. For some diseases, age adjusted rates were calculated using the direct method of standardisation, with 2006 census data as the standard population. All rates are represented as the rate per 100,000 unless stated otherwise.

This report is based on 2011 data from each state and territory, agreed upon in August 2012, and represents a snap shot of the year after duplicate records and incorrect or incomplete data were removed. Totals in this report may vary slightly from the totals reported in CDI quarterly publications.

Analyses in this report were based on the date of disease diagnosis in an attempt to estimate disease activity within the reporting period. The date of diagnosis is the onset date or where the date of onset was not known, the earliest of the specimen collection date, the notification date, or the notification receive date. As considerable time may have elapsed between the onset and diagnosis dates for hepatitis B (unspecified), hepatitis C (unspecified) and tuberculosis, the earliest of specimen date, health professional notification date or public health unit notification receive date was used for these conditions.

Notified cases can only represent a proportion (the ‘notified fraction’) of the total incidence (Figure 1) and this has to be taken into account when interpreting NNDSS data. Moreover, the notified fraction varies by disease, by jurisdiction and over time. 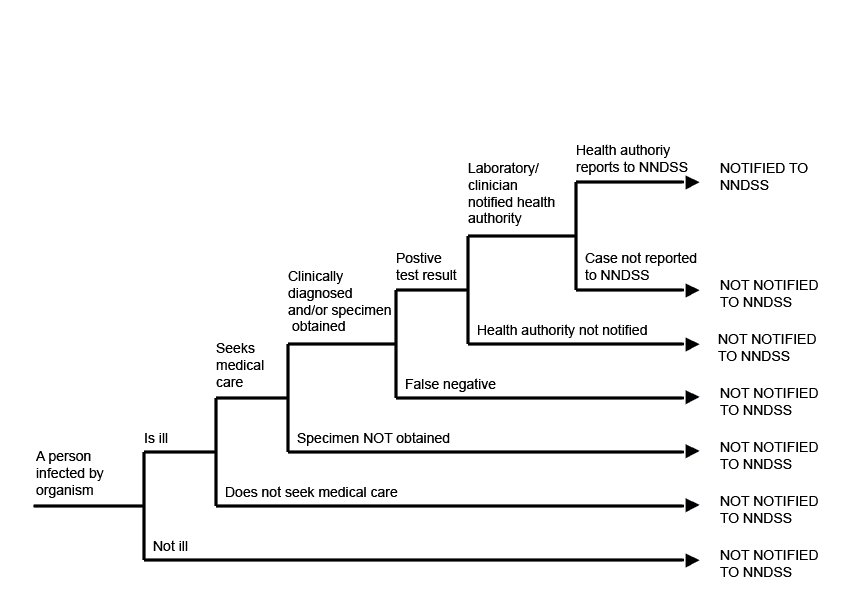 Methods of surveillance vary between states and territories, each having different requirements for notification by medical practitioners, laboratories and hospitals. Although the National Notifiable Diseases List2 was established, some diseases are not notifiable in all 8 jurisdictions (Table 1).

Changes in surveillance practices may have been introduced in some jurisdictions and not in others, and must be taken into consideration when comparing data between jurisdictions.

Postcode information usually reflects the residential location of the case, but this does not necessarily represent the place where the disease was acquired.

Data completeness was assessed for cases’ sex, age at onset, and Indigenous status, and reported as the proportion of complete notifications. The completeness of data in this report is summarised in the Results.

The per cent of data completeness was defined as:

The Indigenous status was defined by the following nationally accepted values:7

4=Not Indigenous – (not Aboriginal or Torres Strait Islander origin)

The national surveillance case definitions and their review status are available from the Australian Government Department of Health’s web site (http://www.health.gov.au/casedefinitions).

There were 238,158 communicable disease notifications received by NNDSS in 2011 (Table 2)

There was an increase of 14% compared with the total number of notifications in 2010 but numbers were similar to those in 2009 (Figure 2). This increase in total notifications was largely due to the ongoing pertussis epidemic and higher than usual inter-season notifications of influenza. 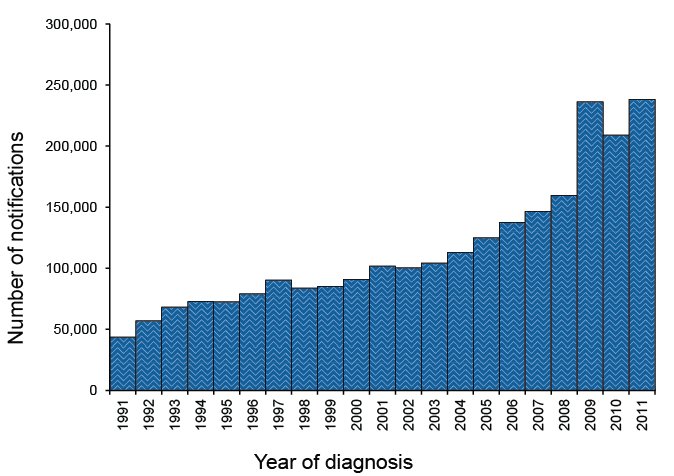 The year in which diseases became notifiable to NNDSS in each jurisdiction is shown in Table 6.

The major changes in communicable disease notifications in 2011 are shown in Figure 3 as the ratio of notifications in 2011 to the mean number of notifications for the previous 5 years. Pneumococcal disease (invasive), Murray Valley encephalitis virus (MVEV) infection, measles, leptospirosis, gonococcal infection, chlamydial infection and campylobacteriosis all surpassed the expected range (5-year mean plus 2 standard deviations). MVEV infection is very rare, and therefore any increase in case numbers leads to a large change in the ratio compared with the 5-year mean. Pertussis did not exceed the 5-year mean plus 2 standard deviations but experienced epidemic level activity in 2011.

Figure 3: Comparison of total notifications of selected diseases reported to the National Notifiable Diseases Surveillance System in 2011, with the previous 5-year mean 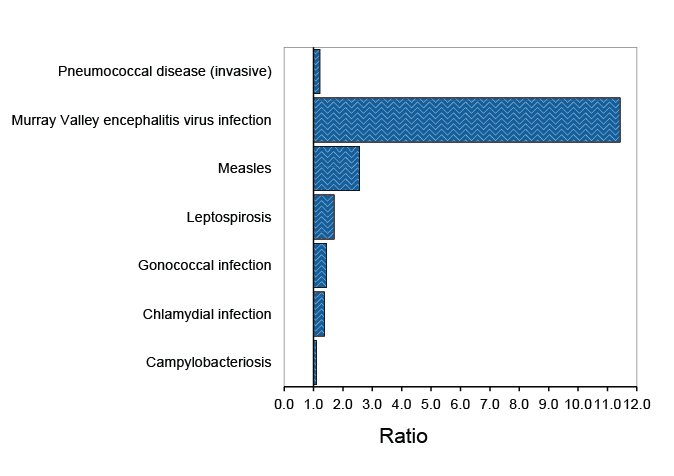