Flutracking is a national online community influenza-like illness (ILI) surveillance system that monitors weekly ILI activity and field vaccine effectiveness (FVE). Data from this report showed moderate levels of ILI in 2012, compared to lower levels of ILI seen in 2011 and 2010, and was consistent with the increase in national influenza laboratory notifications.

The main aims of Flutracking have been to:

In 2011 new questions were added to the Flutracking surveillance system to document health seeking behaviour amongst participants. This enabled regular calculation of influenza burden of illness pyramids to examine the proportion of participants with ILI that sought medical care, the type of medical care sought, and the proportion tested for influenza.

This article reports on the 2011 and 2012 findings from the Flutracking ILI surveillance system.

The weekly survey in 2011 and 2012 was similar to that used in 2007 to 2010.2 However, in 2011 the following questions were added to the initial questionnaire that participants receive upon registration (existing participants were also asked to complete these new questions):

In 2011, additional questions on health seeking behaviour that allow a surveillance pyramid to be constructed were also added. These findings have been published.6

Aboriginal and Torres Strait Islander status was also added to the questionnaire in 2012. In addition, participants selecting both fever and cough for a particular week were asked whether they had experienced a sore throat in the 2012 survey.

The percentage of participants who completed at least one survey in 2012 and identified as Aboriginal and/or Torres Strait Islander was calculated nationally.

The percentage of participants who completed the final survey of the season and who were vaccinated with the seasonal influenza vaccine was calculated nationally for 2011 and 2012.

The proportion of participants less than 10 years of age whose parents completed the final survey of the season on their behalf and who were vaccinated with the seasonal influenza vaccine, was calculated nationally for 2011 and 2012.

A FVE analysis for New South Wales participants 18 years of age or older was conducted for 2011 and 2012 using a similar method to 2010.8

An analysis of the difference in weekly ILI prevalence amongst vaccinated and unvaccinated participants was conducted at both the national level and state or territory level for states and territories with greater than 1,000 participants from 2010 to 2012. Vaccination was defined as having received seasonal vaccine in the year of participation. Weekly ILI prevalence was reported using a definition of fever and cough in the preceding week. The unstratified ILI rates were compared with national laboratory influenza notifications for 2009 to 2012. 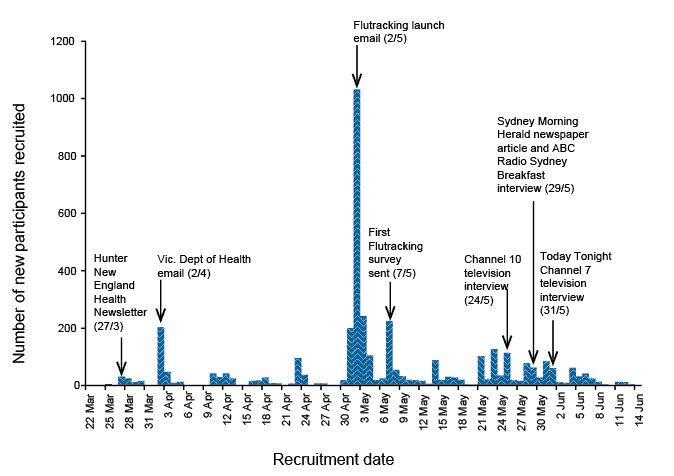 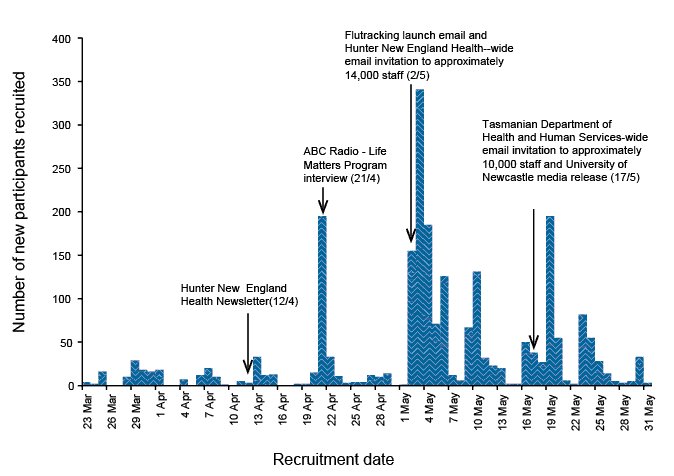 Amongst Flutracking participants who completed at least one survey each year, 66% and 64% were female in 2011 and 2012 respectively, and 24% of participants had a postgraduate degree (Table 3.)

Proportion of participants with influenza-like illness

Proportion of participants with sore throat

From 2007 to 2012 the FVE calculation for New South Wales participants demonstrated that the seasonal vaccine was effective in reducing the risk of ILI except in 2009 during the pandemic (Figure 3).

Figure 3: Field vaccine effectiveness against all influenza-like illness for peak 4 weeks in New South Wales, participants greater than 18 years of age, 2007 to 2012 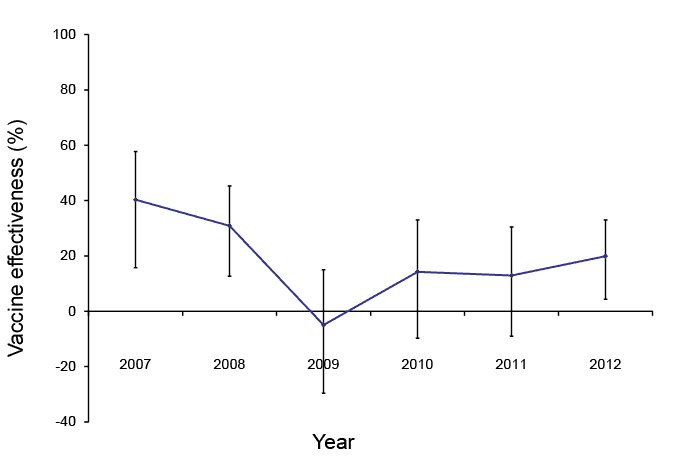 95% confidence intervals are represented by the bars in the figure 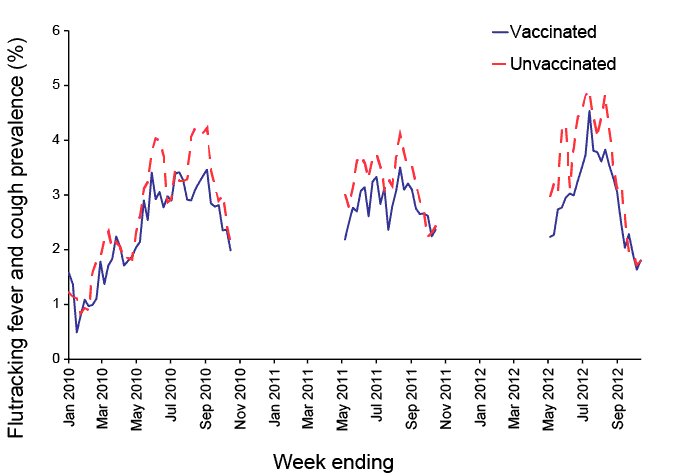 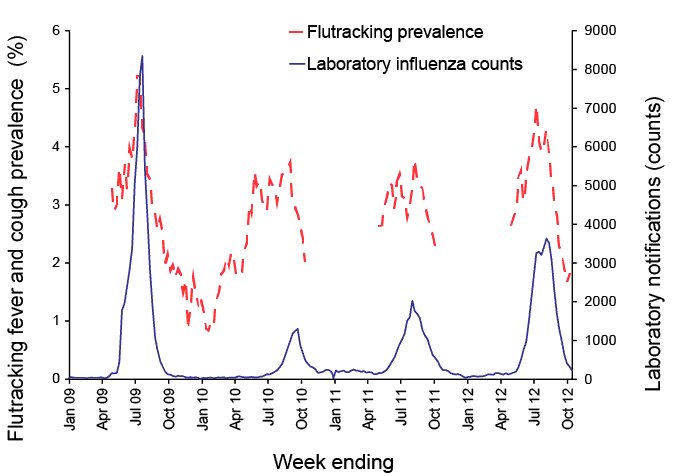 With each additional year of Flutracking surveillance, the number of participants has steadily grown. Media releases are useful and high profile media programs can result in significant recruitment as demonstrated by the increase in participant numbers seen in 2011, but an invitation email to a potential participant has the advantage of being immediately clickable to initiate the enrolment process. While media coverage on television and radio does provide enhanced awareness of Flutracking, unless a potential participant is actually at a computer during the program they cannot immediately enrol and must remember the Internet address for later enrolment. Newspapers that include online coverage with hyperlinks to the Flutracking web site (Flutracking.net) may be more effective.

In 2011 and 2012, Flutracking was the only surveillance system providing weekly updates of vaccination uptake. Although the Flutracking sample may not be representative of the Australian population, results from this system are still useful for monitoring long term trends or detecting changes in vaccine uptake. The decreased influenza vaccination coverage of participants under 10 years of age after 2010 may be due to decreased concern about influenza after a relatively mild influenza pandemic or increased concern about adverse reactions to the vaccine following media coverage of adverse events in 2010 associated with the CSL Biotherapies Fluvax and Fluvax Junior vaccines.10

Sore throat was asked about amongst those who reported cough and fever. The addition of sore throat as a separate question in the survey is being further evaluated but our preliminary analysis is that it is not justified.

The FVE for influenza vaccine preventing ILI calculated amongst Flutracking participants is much lower than the pooled influenza vaccine efficacy estimate of 59% in those aged 18–65 years, from a recent meta-analysis.11 The FVE calculated for 2011 and 2012 nevertheless demonstrated a greater protective effect than during the 2009 influenza pandemic year and the 2012 estimate was higher than the estimates for 2011 and 2010. A symptom based case definition cannot be expected to provide the same quantitative estimates of FVE provided by a laboratory confirmed outcome as the cases are a mixture of both influenza and other pathogens.12 A sister system in the United Kingdom, however, found that vaccination with the 2010 seasonal influenza vaccine was significantly protective against ILI during the 2010–2011 influenza season with a vaccine effectiveness of 52% (95% CI 27–68).13 Their markedly higher estimate may be due to the greater number of symptom questions and recording of temperature in the European Influenzanet system, which likely allows a more specific case definition for influenza. It will be interesting to follow their assessment of vaccine effectiveness in subsequent years. The main benefit of Flutracking’s FVE calculations are that they can provide a rapid qualitative indication of FVE as was provided during the pandemic. While increasing the number of symptoms reported through our survey could optimise the case definition for calculating FVE, it may negatively impact on participation numbers and frequency of response.

Based on Flutracking data, the community attack rates in the 2012 season were higher than the attack rates in the 2011 and 2010 seasons, which were lower than most other Flutracking surveillance years. National influenza laboratory notifications showed an increase in cases of influenza from 2010 to 2011. However, consistent with Flutracking data, the number of cases was still much lower than 2009. This suggests the 2010 and 2011 influenza seasons have been mild—perhaps due to higher rates of influenza vaccination in the community since 2009 and widespread exposure and subsequent immunity to the influenza A(H1N1)pdm09 virus. The 2012 influenza season was a more moderate influenza season, perhaps due to a returning dominance of the H3N2 influenza strain and influenza B.1

Flutracking and other syndromic surveillance systems can provide situational awareness to assist with the interpretation of the more specific influenza surveillance provided by laboratories; the latter being subject to changes in testing practices by clinicians and laboratories. Flutracking’s surveillance method was unaffected by the changes in testing practices during the 2009 influenza pandemic and was able to demonstrate that the pandemic was not as severe as first anticipated.5

Online surveillance of influenza is a relatively young methodology. At the second International Workshop on Participatory Surveillance held in Amsterdam in April 2013, Influenzanet Europe, Flutracking Australia, and FluNearYou in the United States of America signed an agreement to share data on a standard platform internationally and to standardise methods and case definitions where possible to compare data internationally.14,15

All authors declare that they have no competing interests.