Supplemental use of an interferon-gamma release assay in a state-wide tuberculosis contact tracing program in Victoria: a six-year review

Introduction: Tuberculin skin testing (TST) has been the accepted Australian standard for investigating contacts following exposure to infectious tuberculosis (TB). In recent years, the availability of the interferon-gamma release assays (IGRA) has introduced a potential alternative test but data on its use in this context are limited.

Methods: A prospective longitudinal cohort study was conducted from 2008–2013 to review the use of IGRA and subsequent TB disease following testing in a state-wide contact tracing program. Additional information on the experience and acceptability of IGRA in this context was also obtained through program staff surveys following implementation.

Results: IGRA testing was performed on 643 contacts, with a mean follow-up of 3.7 years. IGRA was primarily used to supplement TST, most commonly due to borderline TST reactivity in individuals who had bacille Calmette-Guérin vaccination. Where both TST and IGRA were performed, correlation of test results was poor (kappa=0.35). The negative predictive value for later development of active TB was 99.5%.

Conclusions: Our experience suggests that IGRA are able to be incorporated safely and effectively as a supplement to TST-based contact tracing. Commun Dis Intell 2015;39(2):E191–E196.

The State of Victoria, Australia has a population of approximately 5.4 million people, with 75% residing in Melbourne. In 2010, there were 7.8 notifications of tuberculosis (TB) per 100,000 population in Victoria, with 96% of laboratory-confirmed cases occurring in people born outside of Australia.1 State-wide public health management of TB in Victoria, including contact tracing for approximately 2,000 people per year following exposure to pulmonary TB, is performed by the Victorian Tuberculosis Program, based within the Victorian Department of Health (and now within the Peter Doherty Institute, Melbourne Health), during the period of this report.

Historically, the approach to contact tracing in Victoria has been through standardised interviews regarding extent of contact (infectiousness, duration and intensity). Break-of-contact (BOC) tuberculin skin testing (TST) is performed routinely 3 months following exposure, with additional TST performed at baseline for household or other high-risk contacts. However, in certain settings the use or interpretation of TST has been considered problematic, such as baseline reactivity in a bacille Calmette-Guérin (BCG)-vaccinated contact, or a non-reactive test in an immunocompromised individual.2 Alternative testing options, including the use of interferon-gamma release assays (IGRA) for latent TB, have emerged in recent years, and have been increasingly well-validated for diagnosis of latent tuberculosis infection (LTBI) in a variety of contexts.3,4 IGRA testing can also be performed in a single visit, offering a potential advantage over the TST, which requires a second visit for recording a result. Increasing availability of IGRA has introduced the possibility that this may offer a suitable alternative in some situations, and these tests have been reported to function effectively in contact tracing settings internationally.5–7 However, experience in an Australian contact tracing context has been limited to date and existing national guidelines call for local programmatic evaluation.8

This article reports a prospective longitudinal cohort study that was initiated to review experience using IGRA within a public health contact tracing program in Victoria. From 2008, IGRA has been available as an alternative to, or supplement for TST on an individual contact assessment basis. Funding provided by a charitable trust enabled testing to be provided without cost to contacts, as the use of IGRA for contact tracing has not been a previously funded part of programmatic activities. In this paper we describe the use of IGRA by the Victorian Tuberculosis Program from 2008–2013, including comparison of results where both TST and IGRA tests were performed and subsequent re-notification with active TB, and discusses the pragmatic experience of IGRA testing for contact tracing in a low-prevalence setting.

Prospective data was collected from 1 January 2008 to 31 December 2013 on all contacts in Victoria who were tested with IGRA by the Victorian Tuberculosis Program (hereafter termed IGRA recipients). At the time of substituting IGRA, public health nursing staff were required to document the circumstances of use, including reasons for selecting IGRA. Results of TST (using 5 IU tuberculin) were also recorded where performed. Demographic information, contact investigation results and referral outcomes were routinely collected as part of the Victorian Tuberculosis Program contact tracing records. Data on all other contacts registered in the notification database during the same time period (hereafter termed other TST recipients) were extracted to enable comparisons of basic demographic details and BCG vaccination status between IGRA and other TST recipients. All IGRA recipients were also checked against the notification database to assess re-notifications with active TB.

Data were analysed using Microsoft® Office Excel 2010 and Stata (version 12.0, Stata Corp., College Station, TX, USA). TST results reported as induration in mm were categorised as <10 mm, 10–<15  mm and ≥ 15 mm. TST >10 mm are reported as positive unless otherwise stated. Contacts with equivocal or indeterminate IGRA (as per manufacturer’s instructions) were categorised as having a negative IGRA result for analysis. Descriptive analysis incorporating means, medians and proportions were performed. Comparison of proportions was conducted with chi-square tests for categorical variables, and for continuous variables, the unpaired t-test or Mann-Whitney Wilcoxon rank-sum test. The kappa score was calculated for TST/IGRA agreement where both tests were performed for IGRA recipients. We also calculated the positive and negative predictive value (PPV and NPV respectively) of IGRA and subsequent re-notification of active TB. PPV was derived by the following: true positive/(true positive + false positive), where true positive was defined as those with IGRA positive and active disease, and false positive were IGRA negative and active disease. NPV was derived by the following: true negative/(true negative + false negative), where true negative was defined as those with negative IGRA and non-disease and false negative were those with positive IGRA and active disease.

All data included in this report were collected and recorded as part of routine Victorian Tuberculosis Program activities under the Public Health and Wellbeing Act 2008. According to the rules of the Department of Health Victoria, human research ethics committee approval or additional informed consent from participants was not required.

Justification for the use of IGRA is presented in the Figure. IGRA were most commonly used as an adjunct to TST in BCG vaccinated individuals with a 10–15 mm TST reaction at BOC (40%). This was followed by IGRA replacing TST in 198  contacts (30%) due a variety of reasons listed in Table 2.

(A) By interferon-gamma release assays positivity 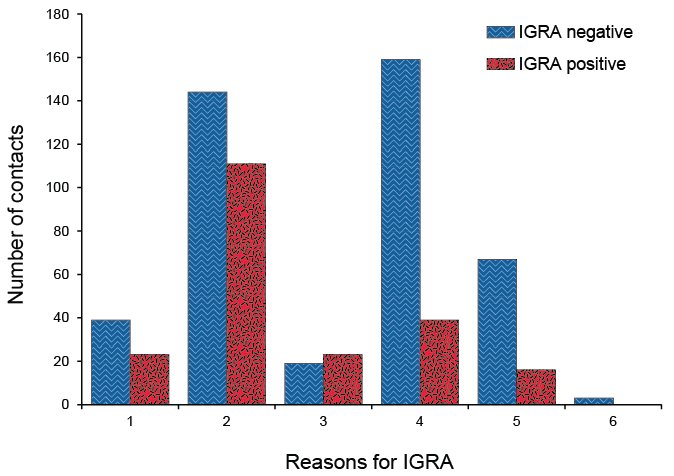 (B) By bacille Calmette-Guérin vaccination status 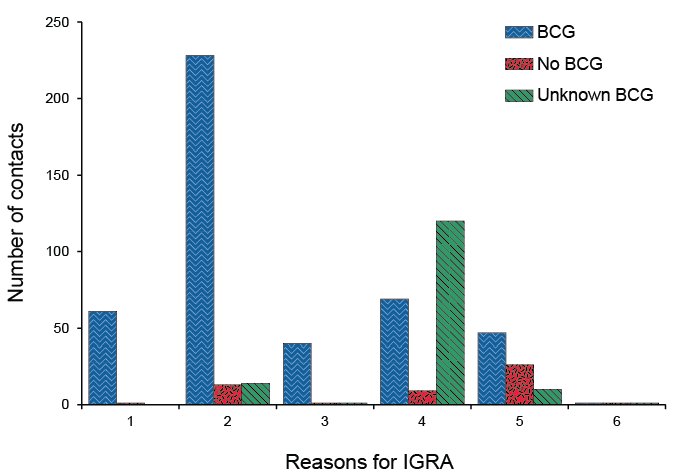 Of 463 contacts where both tests were performed, the kappa coefficient between IGRA and TST was 0.35.

We followed up 633 (98%) of the 643 contacts to ascertain if any developed active TB. All contacts were followed up until 30 June 2014 and the mean length of follow up time was 3.7 years (range 0.6 to 7.3 years). There were no differences in the length of follow up between those with positive and negative IGRA. Six contacts were subsequently re-notified with active TB, four in those with positive IGRA and two in contacts with negative IGRA. The positive and negative predictive value of IGRA was 2% and 99% respectively (Table 4). The median duration for re-notification in IGRA positive contacts was 5.3 months (range 2.5–6.2  months).

Of the 2 contacts with negative IGRA who subsequently developed active disease, the 1st case was a 22-year-old close household contact born overseas from a high TB burden country and was notified 18 months later with culture-confirmed pulmonary and genitourinary TB. The case had a concurrent TST result of 0 and 10 mm at baseline and BOC respectively, in the context of previous BCG vaccination. The 2nd case was a 21-year-old household contact born overseas, who was notified 10 months later with culture negative pulmonary TB and was on treatment for presumptive TB. The case had a TST result of 0 mm and 6 mm at baseline and BOC, and reported travelling home regularly to a high-burden country during the period between initial exposure and active disease. Neither case met existing guidelines for further assessment at the time of contact investigations.

Over the first 6 years since implementation, the use of IGRA has developed as a routine component of contact tracing for TB in Victoria. In the selected group reported here, we found that the test performed well, with good positive and negative predictive values for the later development of active TB. Informally, our experience has been that IGRA have provided a useful adjunct test for contact tracing, and that program staff have become comfortable with their use and interpretation in this setting.

Programmatic recommendations regarding the use of IGRA internationally have tended to suggest that IGRA may be substituted for TST in most circumstances, including contact tracing.9 Despite the generally positive experience of introduction, however, only a small proportion of contacts in Victoria are currently tested with IGRA. This reflects several factors, including the cost of IGRA testing. The data presented here, both in terms of actual usage and perceived benefits, tend to support the use of IGRA as an adjunct to TST, rather than as a replacement tool. In our study, this was most commonly used in BCG vaccinated individuals to improve the specificity of a positive TST result which explained the poor agreement between both tests, largely because of discordant TST positive / IGRA negative results. The programmatic use of IGRA may change in future, particularly if the cost of IGRA testing is reduced or Medicare-funded indications expand. However, uncertainties regarding the use of IGRA in some contacts (particularly children aged < 5 years) suggest that it is unlikely to replace TST entirely.10

In keeping with international experience, the data presented here suggest that IGRA performs well in predicting risk of future development of tuberculosis. This report has some limitations. This report has not considered health economic aspects of test selection, such as a cost-benefit analysis. These analyses are an important part of programmatic decision-making, and future research to evaluate cost-benefit is planned. While contact tracing services are provided centrally, chemoprophylaxis for latent tuberculosis is delivered in a decentralised fashion within public hospital networks. Accordingly, some patients found to have a positive TST or IGRA may not have subsequently completed therapy. Reinfection, particularly in the setting of overseas travel, is also possible, and so precise assessment of risk of TB disease following exposure is not possible. However, this report also has the advantage of complete statewide contact tracing and laboratory data with longitudinal follow up, and provides additional information suggesting that IGRA may be incorporated within public health programs in Australia.

In a low-prevalence region such as Victoria, experience with performing and interpreting TST results is relatively focused within the Victorian Tuberculosis Program. Accordingly, testing contacts of pulmonary TB in rural districts requires considerable travel time and expense associated with TST. The logistic difficulties of performing TST in rural locations are likely to account for the higher proportion of rural contact tested with IGRA. In our setting, a state-wide pathology provider was able to offer a local blood collection service for IGRA, allowing considerable improvement in efficiency in these circumstances. In other regions with varying capacity for pathology services and TST, logistic experiences may be different. Services with different background populations, including those with high proportions of HIV-infected contacts, may require different approaches to screening and treatment following TB exposure.11

Overall, while TST are likely to remain in common use for Australian TB programs, our experience has been that IGRA are able to be incorporated safely and effectively as a supplement to TST-based screening. We hope the results presented here will assist other TB programs in evaluating the utility of incorporating IGRA into local contexts. Further research into the impact of IGRA in this setting, including formal cost-effectiveness evaluation, will provide additional insights into their optimal programmatic use.

We are grateful to the John Burge Trust for funding interferon-gamma release assays used in this report.