This report presents preliminary estimates of the human papillomavirus vaccination coverage achieved in the first year of the school based program for males (2013). These estimates were provided by each of Australia’s states and territories using local systems recording number of doses administered and estimated school enrolments.

In February 2013, following the successful establishment of the National Human Papillomavirus (HPV) Vaccination Program for females in Australia in 2007,1,2 the program was extended to males. This followed a recommendation by the Pharmaceutical Benefits Advisory Committee that extension of the quadrivalent HPV vaccine program to males would be acceptably cost-effective compared with female only vaccination,3 and subsequent listing on the National Immunisation Program of quadrivalent HPV vaccine for males. The program extends routine school-based HPV vaccination offered during the first year of high school (at age approx 12–13 years) to males, with a 2 year catch-up program for males aged 14–15  years delivered in 2013 and 2014. The 3  dose coverage (completed course) in the female program has been consistently around 71% by age 15  years, with higher 1 (~81%) and 2 (~79%) dose coverage (National HPV Vaccination Program coverage data (http://www.hpvregister.org.au/research/coverage-data)). In this report we present interim estimates of male HPV vaccination coverage achieved in the school-based program in 2013.

The Department of Health funds the purchase of HPV vaccine for the national school program, whilst the states and territories are responsible for managing the distribution and administration of the vaccine.

Each of the 6 states and 2 territories are responsible for delivering the school-based vaccination program to their population. As described elsewhere, programs vary somewhat in terms of organisational infrastructure, data collection systems, co-administration of other vaccines, frequency of reporting of data to the National HPV Vaccination Program Register (‘the Register’) and coverage achieved.1,4,5 The Register uses estimated resident populations from the Australian Bureau of Statistics (ABS) as the denominator for estimating population based HPV vaccination coverage.5 Numerator data include doses delivered in the school setting as well as doses delivered in general practice and by other community providers.

In the first year of the male HPV vaccination program (2013), target populations by age and gender (i.e. year level) varied by jurisdiction, as the timeline for the delivery of the catch-up component varied (Figure). Because of this variation in target age group, meaningful national level coverage data by age is not yet available from the Register. 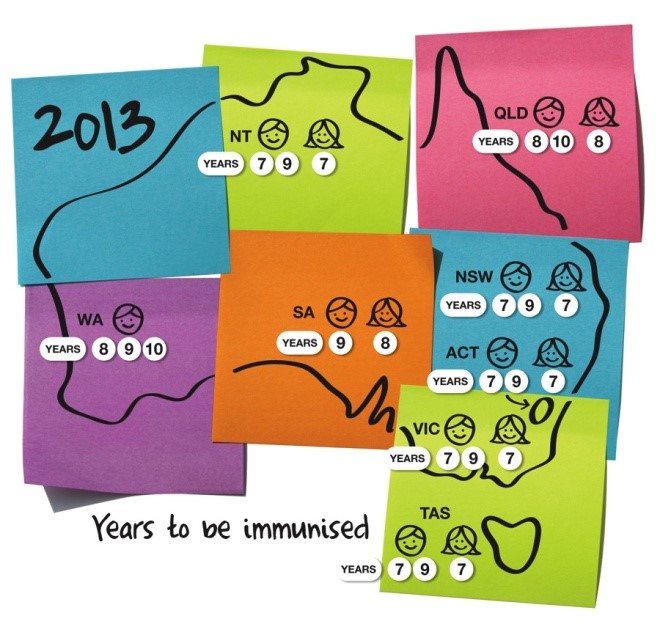 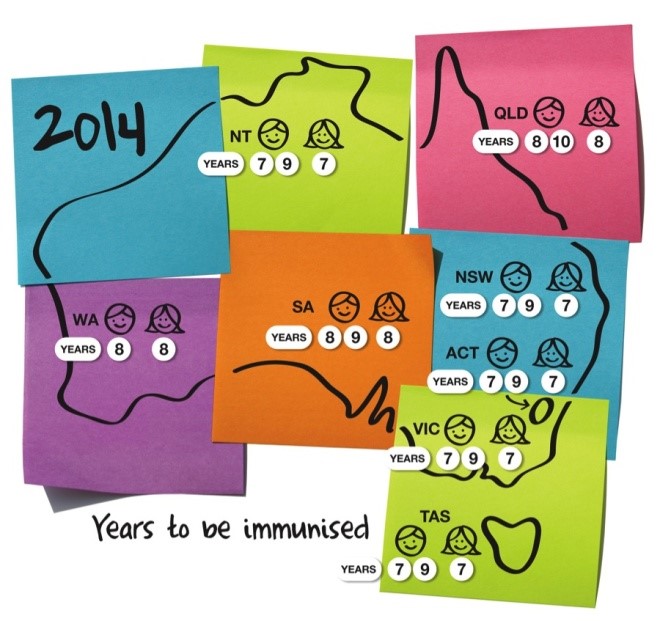 For this report, all jurisdictions except the Northern Territory, utilised available data from their respective departments of education to estimate the eligible enrolled school populations targeted within their jurisdiction during 2013, as the denominators. The numerators comprised the number of doses administered by the school program by dose number. Doses administered in general practice were generally excluded except in the Northern Territory and in South Australia, where general practitioners must notify the health department when giving vaccine to an age eligible recipient. Doses administered in 2014 to complete courses commenced in 2013 in the targeted cohorts were included up to the time of data extraction (September 2014) in New South Wales, Western Australia, South Australia and the Northern Territory. Thus in Victoria, Queensland, the Australian Capital Territory and Tasmania in particular, the presented estimates will be an underestimate of the actual coverage achieved within the school cohorts as 2014 doses are not included, and comparisons across jurisdictions for dose 2 and 3  estimates should not be made.

Based on dose orders placed by the states and territories, a total of 1,281,350 doses of the HPV vaccine were purchased by the Australian Government in 2013.

In jurisdictions where the same high-school year level was targeted for boys and girls in 2013 (New South Wales, Queensland, Victoria, the Australian Capital Territory and Tasmania), male coverage for dose 1 was only slightly lower than for females (1%–6% lower) with the exception of Tasmania (Table). Male coverage in Tasmania was 3% higher, although not all councils offered HPV vaccine to girls in Year 7 in 2013 (girls in some council areas had been offered vaccine in Year 6 in 2012). Coverage in older boys appears lower, which is consistent with the lower coverage achieved in adolescents in school programs with increasing age.1,4

These preliminary estimates suggest a high community acceptance of the extension of the program to males, although coverage appears to be slightly lower than for females (for whom the program is in its 8th year of HPV vaccination in 2014). Over 837,000 doses have been reported to the Register from the male program as at 30 September 2014. Comparison of coverage across jurisdictions is not appropriate from these data due to variations in completeness of data and methods used. Jurisdictional variability in reported school coverage for dose 1 has been previously observed for HPV vaccination in females, and other adolescent vaccines.1,4

Final immunisation data following the completion of the male catch-up program at the end of 2014 are awaited, following which a more complete assessment of the population coverage achieved in the targeted cohorts will be undertaken. We need to continue to encourage the notification of HPV vaccination doses delivered by general practitioners and other immunisation providers outside of the school program to ensure that coverage estimates are as accurate as possible. The provision by the Register of overdue dose reports for providers and of history statements or reminder letters to those yet to complete their vaccine course are effective methods to improve both the reporting of doses administered and actual coverage.6 Accurate coverage estimates will facilitate the on-going monitoring of the impact of our world-leading vaccination program on HPV-related disease and cancers, with results from the female program already showing substantial reductions in HPV infection, genital warts and cervical pre-cancers.7,8,9