In 17 Australian hospitals, 1692 admissions with laboratory confirmed influenza were reported between April and October 2014, of which almost half were elderly and 85% had medical comorbidities.

The Influenza Complications Alert Network (FluCAN) is a sentinel hospital-based surveillance program that operates at sites in all states and territories in Australia. This report summarises the epidemiology of hospitalisations with laboratory-confirmed influenza during the 2014 influenza season. In this observational study, cases were defined as patients admitted to one of the sentinel hospitals with an acute respiratory illness with influenza confirmed by nucleic acid detection. During the period 3 April to 31 October 2014 (the 2014 influenza season), 1,692 adult patients (>16 years) were admitted with confirmed influenza to one of 15 of 17 FluCAN sentinel hospitals (excluding 2 paediatric hospitals). Of these, 47% were over 65 years of age, 10% were Indigenous Australians, 3.3% were pregnant and 85% had chronic co-morbidities. The majority of cases were due to influenza A. Influenza B was detected in 7% of patients. There were a large number of hospital admissions detected with confirmed influenza in this national observational surveillance system in 2014. These are estimated to represent a national annual burden of around 15,000 admissions and almost 100,000 bed-days nationally. Commun Dis Intell 2015;39(3):E355–E360.

Influenza is a common respiratory viral infection that affects up to 5%–10% of the population each year.1 Although the proportion of cases requiring hospitalisation is low, because infection with influenza virus is relatively widespread, the incidence of hospitalisation from influenza is of public health significance.2

We established a national sentinel surveillance program for severe influenza in 2009 primarily to provide timely information to public health authorities nationally on hospitalisations with laboratory-confirmed influenza. In this report, we describe the epidemiology of hospitalisation in adults with laboratory-confirmed influenza. A report on severe paediatric influenza will be reported separately.

An influenza case was defined as a patient admitted to hospital with influenza confirmed by nucleic acid testing. Surveillance is conducted from April to November (with follow up continuing to the end of November) each year. Admission or transfer to an intensive care unit (ICU) included patients managed in a high dependency unit. The onset date was defined as the date of admission except for patients where the date of the test was more than 7 days after admission, where the onset date was the date of the test. The presence of risk factors and comorbidities was ascertained from the patient’s medical record. Restricted functional capacity was defined as those who were not fully active and not able to carry on all pre-disease performance without restriction.5

During the period 5 April to 31 October 2014 (the 2014 influenza season), 1,692 patients were admitted with laboratory-confirmed influenza to one of 15 FluCAN non-paediatric sentinel hospitals. The peak rate of admission was highest in early September, and varied by jurisdiction between mid-August and mid-September (Figure). The majority of cases were due to influenza A, but 115 (6.8%) were due to influenza B. The proportion due to influenza B varied by site from 1 of 55 cases (2%) at the University Hospital Geelong, to 32 of 180 cases (18%) at Westmead Hospital.

Figure: Date of admission in patients hospitalised with confirmed influenza, 5 April to 31 October 2014 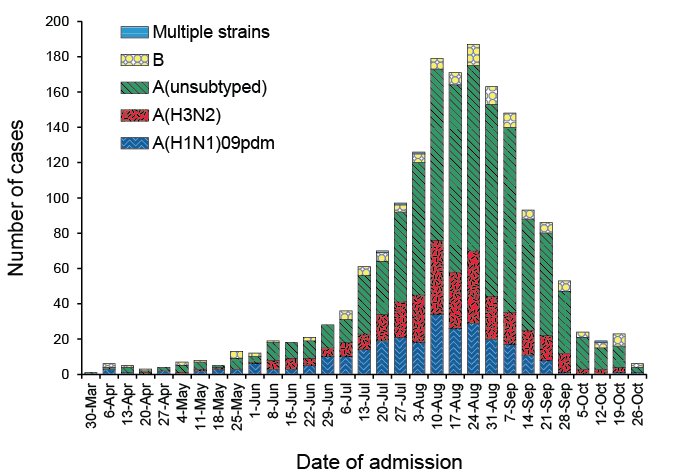 By week beginning on listed date; representing date of admission (or date of influenza diagnosis if acquired less than 7 days in hospital).

Of the 1,516 patients where hospital mortality status was documented, 44 (2.9%) patients died, which included 21 patients in ICU. Of all in-hospital deaths, 32 (73%) were patients more than 65 years of age, 43 (98%) had medical comorbidities and 2 (1.9%) were Indigenous Australians. Significant medical comorbidities in patients who died following admission with laboratory-confirmed influenza were recorded as chronic cardiac disease (n=19), chronic respiratory disease (n=23), immunosuppression (n=11), diabetes (n=14) and renal disease (n=9).

Hospital-based sentinel surveillance provides timely and detailed information on the severity of illness, and complements community- and primary care-based surveillance systems that provide information on the extent of spread. Surveillance programs similar to FluCAN are operating in many countries.6–10 The FluCAN system in Australia includes sites in all jurisdictions with representation from metropolitan and regional hospitals, specialist paediatric hospitals and those in tropical and subtropical regions. By collecting data on patients with acute respiratory illness who test negative for influenza, vaccine coverage (particularly in vulnerable patients) and vaccine effectiveness against severe influenza can be estimated from the same study.11, 12

In 2014, we recorded almost 1,700 admissions to the 15 hospitals that participated in this surveillance network, representing the highest number of admissions since surveillance commenced in 2009. Virological surveillance suggested influenza A(H1N1)pdm09 predominated across most jurisdictions throughout the season, however influenza A(H3N2) was predominant in New South Wales and the Australian Capital Territory.4 Influenza B (B/Yamagata-lineage) was less common in this season than in 2013.13 Due to differences in the number and size of sentinel hospitals in each jurisdiction, the relative number of cases between jurisdictions may not represent differences in true influenza incidence.

In contrast to other studies, we found that the demographic profile and proportion with chronic comorbidities was similar in patients who were admitted to ICU compared with those admitted to the general wards.14 Older patients were under-represented in ICU; this is likely to reflect a lower severity of illness, as older patients with mild disease may still require care in hospital. This may also reflect policies discouraging admission of the frail elderly into ICU if deemed futile.

We found that the length of stay was longer in those with more severe illness (ICU admission) and functional impairment. Interestingly, some risk groups (elderly, pregnant, Indigenous Australians) had a shorter length of hospital stay suggesting that the severity of illness is the primary driver for length of stay, rather than underlying risk factors. It may also reflect ascertainment bias in that patients with risk factors may have been more likely to be tested for influenza.

With a mean length of stay of 6.6 days, the patients with laboratory-confirmed influenza detected in this surveillance system represent over 9,870 bed days in the 15 sentinel hospitals. As the hospitals represented in this network represent approximately 12% of the national hospital bed capacity, the cases detected here are likely to represent approximately 15,000 admissions and almost 100,000 bed days nationally. Although the estimate of disease-attributable cost varies widely according to the method of calculation,15 recent Australian costing data suggest that the direct hospital inpatient cost of admissions with confirmed influenza is approximately A$60 million to A$100 million based on accounting costs.16 This is likely to represent a minimum estimate due to influenza case under-ascertainment, healthcare costs incurred following discharge and costs borne by other payers.

There are several limitations to this study. There may be under-ascertainment of influenza due to poor quality sample collection or the lack of use of influenza laboratory tests, despite the diagnosis of influenza having implications for infection control and antiviral use in hospitals. Delayed presentations or secondary bacterial pneumonia may be associated with false negative influenza tests as the influenza infection may be cleared by the time of presentation. Ascertainment in tropical regions is limited by sampling in the winter season only.

In summary, we detected a large number of hospital admissions with laboratory-confirmed influenza in a national observational study in 2014 compared with previous years. A high proportion of patients with severe influenza, and almost all deaths, occurred in patients with chronic comorbidities. In admitted patients, younger age was associated with ICU admission, highlighting the importance of this under-vaccinated risk group.