The main aims of Flutracking are to:

FVE analyses for New South Wales participants 18 years of age or older were conducted for 2013 and 2014 using the same method as previously reported.9

Weekly ILI prevalence is defined as the proportion of participants with both fever and cough. The unstratified (by vaccination status) ILI percentages were compared with national laboratory influenza notifications for 2009 to 2014.

Burden of illness (index of severity)

The weekly percentage of participants from 2011 to 2014 who had 1) fever and cough and two or more days off work or normal duties and 2) who visited a general practitioner, emergency department or stayed as a hospital inpatient due to fever and cough was calculated.

Figure 1: Number of participants who completed at least one survey, Australia, 2006 to 2014, by year 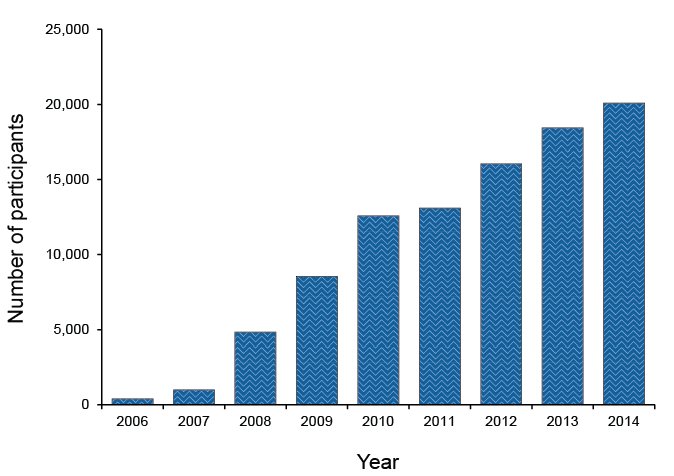 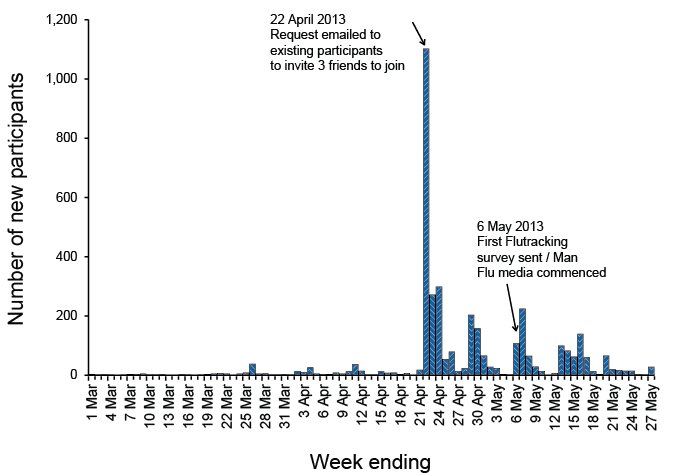 A total of 529 organisations were invited to participate in Flutracking in 2013. Of these, 206 agreed to be emailed additional information regarding employee invitations to the survey, 29 accepted the invitation and agreed to invite their employees and 24 declined.

On 2 May 2014, an email to participants with a request to invite 3 friends (similar to 2013) was sent. On 2, 3, and 4 May, respectively 799, 178, and 111 participants enrolled. There were an additional 877 participants recruited on 5 May 2014: this spike corresponds to the date the first Flutracking survey email was sent to participants (Figure 3). 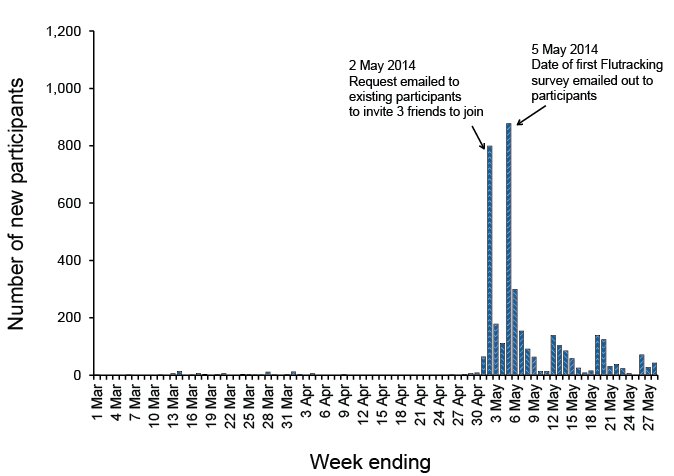 From 2007 to 2014 our field FVE calculation for New South Wales participants demonstrated that the seasonal vaccine was effective against all ILI except in 2009 during the pandemic and in 2014. The FVE calculated for 2014 was less than the 2009 FVE estimate (Figure 4).

Figure 4: Field vaccine effectiveness against all influenza-like illness for peak 4 weeks for participants greater than 18 years of age, New South Wales, 2007 to 2014 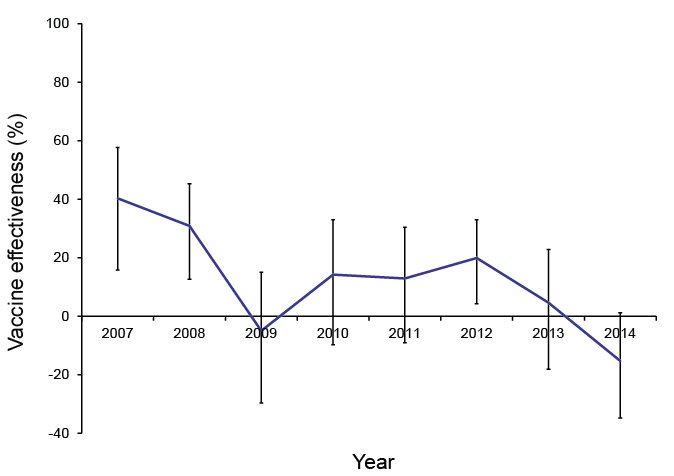 Figure 5: National fever and cough percentage stratified by vaccination status, 2009 to 2014, by week 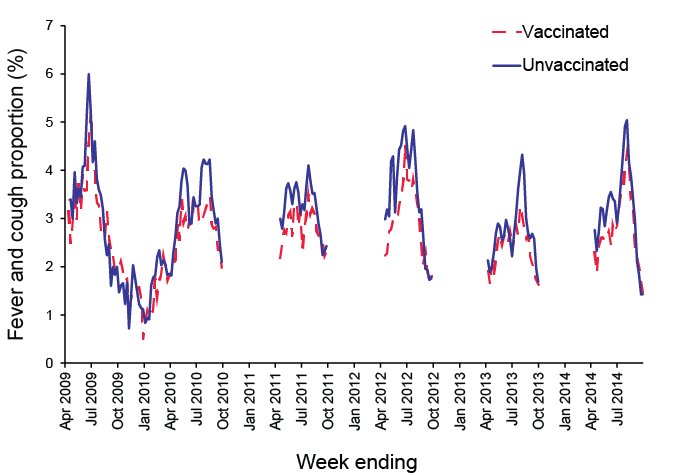 Figure 6: National fever and cough prevalence, April through October (not stratified by vaccination status) compared with national influenza laboratory notifications, 2007 to 2014, by week 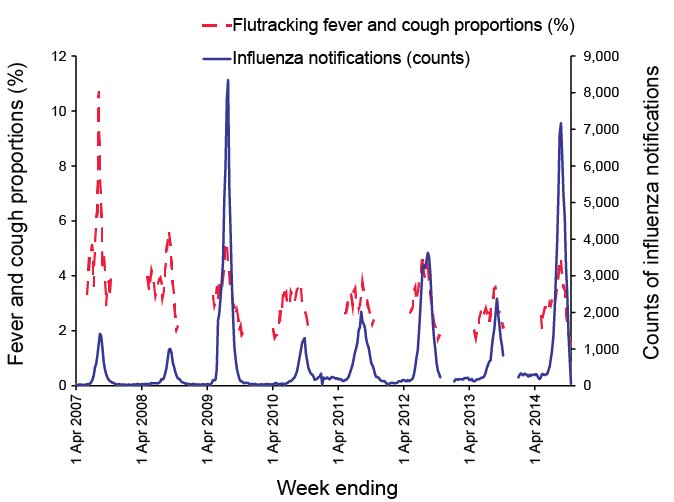 Figure 7: Weekly index of severity: Participants with fever and cough plus 2 or more days off work, and participants who sought medical advice from a general practitioner, emergency department or as a hospital inpatient, Australia, May 2011 to October 2014 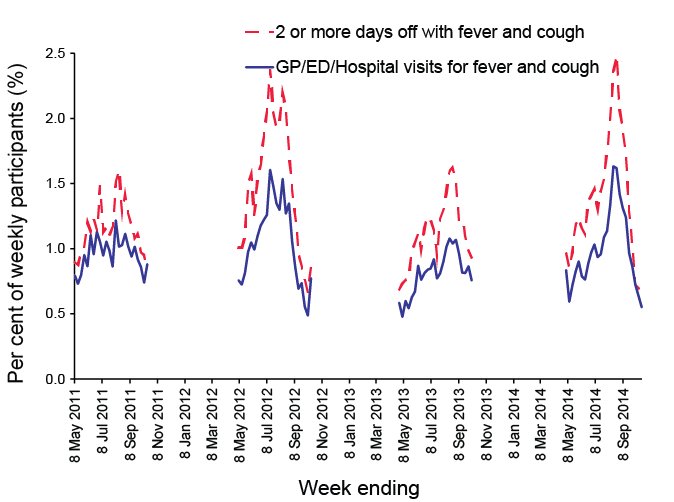 The number of participants completing at least 1 survey during the year continues to increase each year, and in each state and territory. This is welcome as it is resulting in higher population participation rates and broader geographic reach.

Direct marketing of Flutracking via telephone to organisations to invite the participation of their members/employees is becoming less relevant as the size of the cohort increases. It is more efficient to request Flutracking participants to invite their friends and colleagues to join and this has been very successful – Flutracking is now the largest weekly survey of influenza-like illness in the world.

Flutracking participants continue to be predominantly of working age and higher educational status. While a decreased reliance on workplace recruitment will assist to broaden the participant base, requesting existing participants to recruit their friends and colleagues will likely result in them recruiting people from their own demographic base.

The FVE calculated for both 2013 and 2014 demonstrated low vaccine effectiveness compared with 2010, 2011 and 2012. The 2014 FVE estimate was even lower than that calculated in 2009. New South Wales experienced predominantly A(H3N2) strains of influenza in 2014.11 The low 2014 FVE estimate may reflect a decreased match between circulating viruses and the 2014 A(H3N2) vaccine strain.12,13 A symptom based case definition, such as that used by Flutracking, cannot be expected to provide the same quantitative estimates of a laboratory confirmed outcome.Despite its limitations, it appears to concur, at least qualitatively, with conventional test negative vaccine effectiveness methods. The main benefit of Flutracking’s FVE calculations may be that of offering a rapid qualitative indication of FVE as was provided during the 2009 influenza pandemic.

Based on Flutracking fever and cough weekly percentages, the community attack rates in the 2014 season were higher than the attack rates in the 2013 season, but similar to the 2012 attack rates. National influenza laboratory notifications also showed an increase in cases of influenza from 2013 to 2014. This increase was much larger than the increase seen in the Flutracking ILI percentages, which may reflect the ongoing increases in laboratory testing occurring year to year. Flutracking burden of illness data suggested higher levels of ILI in the community in 2014 compared with 2013, with higher rates of time off normal duties and health care seeking behaviour. Influenza A(H1N1)pdm09 re-emerged in 2013 and represented over 15% of all influenza notifications nationally, compared with <1% of notifications in 2012, and the proportion of influenza B was higher in 2013 than in recent years.14 Additionally in 2013, influenza A(H1N1)pdm09 was the predominant subtype in New South Wales and other eastern jurisdictions, where a large proportion of Flutracking participants reside. Influenza A(H1N1)pdm09 also predominated across most states and territories throughout the 2014 season. However, in New South Wales and the Australian Capital Territory A(H3N2) was predominant, and there were late increases in A(H3N2) notifications in Queensland, Western Australia, Tasmania and the Northern Territory.