This report provides an overview of sexually transmissible infections in Aboriginal and Torres Strait Islander people.

Aboriginal and Torres Strait Islander people represent 3% of the Australian population, of which more than two-thirds are less than 34 years of age.1 The Indigenous population is considerably diverse, socially, culturally and geographically, providing a challenging environment to deliver culturally appropriate and accessible healthcare services.2

Despite improvements in health outcomes, disparities between the Indigenous and non-Indigenous populations are evident and occur for a range of health issues, including sexual health.3 Indigenous people continue to be disproportionately represented in the sexually transmissible infections (STI) notification data, particularly in younger age groups residing in remote locations.

For the purposes of this report, notifications with an Indigenous status field reported as not Indigenous or blank/unknown were considered to be non-Indigenous. In interpreting these data it is important to note that changes in notifications over time may not solely reflect changes in disease prevalence. Changes in screening programs,5, 6 the use of less invasive and more sensitive diagnostic tests7 and periodic public awareness campaigns8 may influence the number of notifications that occur over time. Rates for STIs are particularly susceptible to overall rates of testing.9 As a priority and ‘at risk’ population, Indigenous people are commonly targeted for STI screening often resulting in a higher number of reported cases.

Figure 1: Notifications and notification rate (unadjusted) for chlamydia, 2011 to 2014, by year and Indigenous status 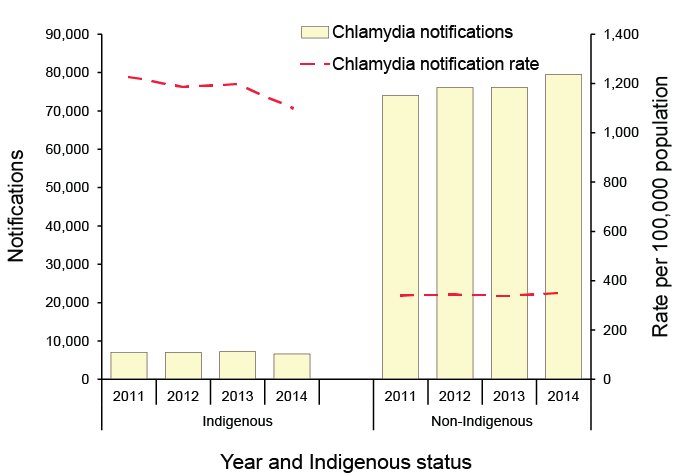 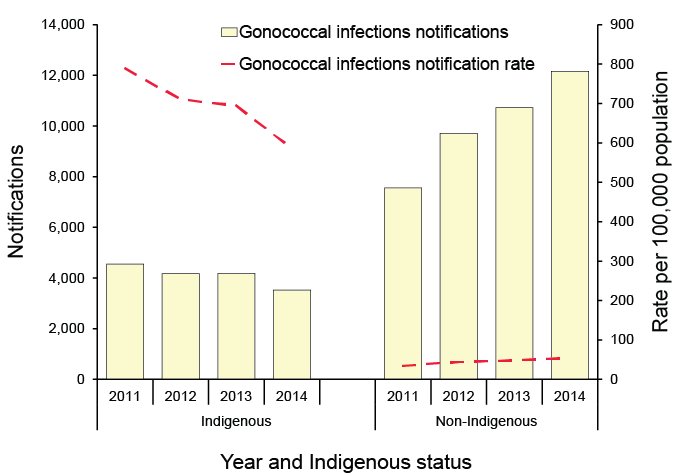 Figure 3: Notification rate (unadjusted) for infectious syphilis and number of congenital syphilis cases, by year and Indigenous status, 2011 to 2014 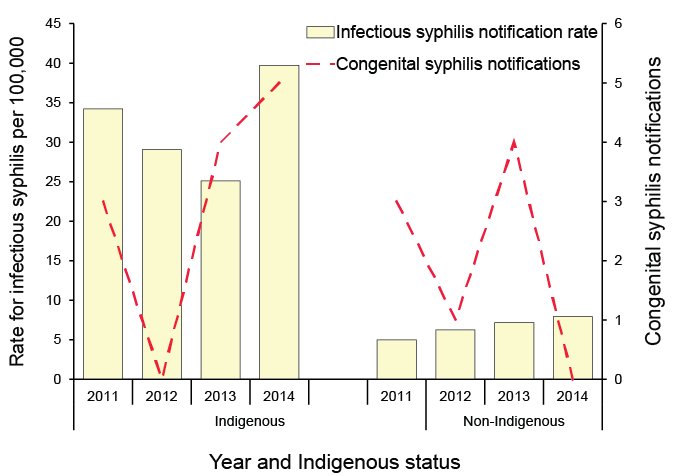 In 2014, in the Indigenous population:

A summary of STI transmission, treatment, trends and risk groups in Australia is shown in the Appendix.

Data presented in this report may differ to those presented in the 2015 Annual Kirby surveillance reports and the NNDSS annual report (pending publishing); however the overall trends are comparable.

Greater representation of women in STI notifications is linked to health seeking behaviour; in general women are more likely to access healthcare services as compared to men who often have biological, sociological and psychological factors determining their ‘help-seeking’ practices.10 This is particularly apparent in Indigenous men, who face not only gender related issues but cultural and in some instances geographical barriers when accessing care.10 Men who remain undiagnosed and therefore untreated have the potential to perpetuate transmission within communities. Repeat and persistent STI infection in Indigenous communities is common, and can have considerable impact on rates of notifications and the prevalence of serious complications of infection, including pelvic inflammatory disease.11,12 Physical access to condoms, due to geographical location, and inconsistent condom use, are also contributing factors to high rates of STI infection in the Indigenous population.13,14

The Australian Government, in collaboration with states, territories and the community, continues to work towards effective public health interventions to prevent STI within the population, particularly among young people and other ‘at risk’ populations. The fourth National Aboriginal and Torres Strait Islander BBV and STI Strategy 2014–2017, part of a suite of National Strategies for BBV and STI, includes specific targets for the elimination of congenital syphilis, reducing the incidence of chlamydia, gonorrhoea and infectious syphilis in people under 30 years of age, and increasing the number of people with HIV receiving treatment.

The Strategy supports the goals of National Aboriginal and Torres Strait Islander Health Plan 2013–2023, a long-term, evidence-based policy framework as part of the overarching Council of Australian Governments’ approach to Closing the Gap in Indigenous disadvantage.

To achieve the targets of the Strategy and address the disproportionate representation of Indigenous people with STI, the Australian Government continues to support innovative approaches, including Point-of-Care Testing to achieve same day STI testing and treatment for Indigenous people residing in remote communities; engagement of organisations to provide healthcare services specifically to Indigenous people, including routine screening for STI; and comprehensive community education and health promotion.