In 2014, there were 165 laboratory-confirmed cases of invasive meningococcal disease (IMD) analysed by the Australian National Neisseria Network (NNN). This is the second lowest number of laboratory confirmed IMD cases referred to the NNN since the inception of the Australian Meningococcal Surveillance Programme (AMSP) in 1994.

In 2014 there were 165 laboratory-confirmed cases of invasive meningococcal disease analysed by the Australian National Neisseria Network. This number was higher than the number reported in 2013, but was the second lowest reported since inception of the Australian Meningococcal Surveillance Programme in 1994. Probable and laboratory confirmed invasive meningococcal disease (IMD) are notifiable in Australia, and there were 170 IMD cases notified to the National Notifiable Diseases Surveillance System (NNDSS) in 2014. This was also higher than in 2013, but was the second lowest number of IMD cases reported to the NNDSS. The meningococcal serogroup was determined for 161/165 (98%) of laboratory confirmed IMD cases. Of these, 80.1% (129 cases) were serogroup B infections; 1.9% (3 cases) were serogroup C infections; 9.9% (16 cases) were serogroup W135; and 8.1% (13 cases) were serogroup Y. Primary and secondary disease peaks were observed in those aged 4 years or less, and in adolescents (15–19 years) respectively. Serogroup B cases predominated in all jurisdictions and age groups, except for those aged 65 years or over, where serogroups Y and W135 combined predominated. The overall proportion and number of IMD caused by serogroup B was higher than in 2013, but has decreased from previous years. The number of cases of IMD caused by serogroup C was the lowest reported to date. The number of IMD cases caused by serogroup Y was similar to previous years, but the number of IMD cases caused serogroup W135 was higher than in 2013. The proportion of IMD cases caused by serogroups Y and W135 has increased in recent years, whilst the overall number of cases of IMD has decreased. Molecular typing was able to be performed on 106 of the 165 IMD cases. In 2014, the most common porA genotypes circulating in Australia were P1.7-2,4 and P1.22,14. All IMD isolates tested were susceptible to ceftriaxone and ciprofloxacin. There were 2 isolates that were resistant to rifampicin. Decreased susceptibility to penicillin was observed in 88% of isolates. Commun Dis Intell 2016;40(2):E221–E228.

The Australian National Neisseria Network (NNN) is a collaborative network of reference laboratories in each state and territory that contribute to the laboratory surveillance system of the pathogenic Neisseria species (N. meningitidis and N. gonorrhoeae). Since 1994 the NNN has coordinated laboratory data from the examination of N. meningitidis cases of invasive meningococcal disease (IMD) for the Australian Meningococcal Surveillance Programme (AMSP).1 The AMSP is funded by the Australian Government Department of Health. Participating NNN laboratories supply phenotypic and genotypic data on invasive meningococci for the AMSP. These data supplement the notification data from the National Notifiable Diseases Surveillance System (NNDSS), which includes cases of probable IMD as well as laboratory confirmed IMD. The characteristics of meningococci responsible for IMD and the associated demographic information are important considerations for management of individual patients and their contacts. These data also inform public health responses for outbreaks or case clusters, locally and nationally. The introduction of the publicly funded conjugate serogroup C meningococcal vaccine onto the National Immunisation Program in 2003 has seen a significant and sustained reduction in the number of cases of serogroup C IMD after 2003.2 However, IMD remains an issue of public health concern in Australia.

Case confirmation is based on isolation of N. meningitidis, or a positive nucleic acid amplification testing (NAAT) from a normally sterile site, defined as laboratory definitive evidence of IMD by the Communicable Diseases Network Australia criteria.3 Information regarding the site of infection, age and sex of the patients is collated by the NNN for the AMSP.

Isolates were tested to determine their minimum inhibitory concentration (MIC) values to antibiotics used for therapeutic and prophylactic purposes: ceftriaxone, ciprofloxacin; rifampicin. This program uses the following parameters to define the various levels of penicillin susceptibility or resistance when determined by a standardised agar plate dilution technique.4 These are: sensitive (MIC ≤ 0.03 mg/L); less sensitive (MIC 0.06–0.5 mg/L) and resistant (MIC ≥ 1 mg/L).

In 2014, there were 165 laboratory-confirmed cases of IMD analysed by the NNN, and 170 cases notified to the NNDSS. Thus, laboratory data were available for 97% of notified cases of IMD in Australia in 2014 (Figure 1). This was the second lowest annual number of IMD cases recorded by the NNDSS, and by the AMSP. In 2013, there were 149 IMD cases recorded by NNDSS and 143 laboratory confirmed IMD cases reported by the AMSP.) As in previous years, the peak incidence for IMD was in late winter and early spring (1 July to 30 September) (Table 1). 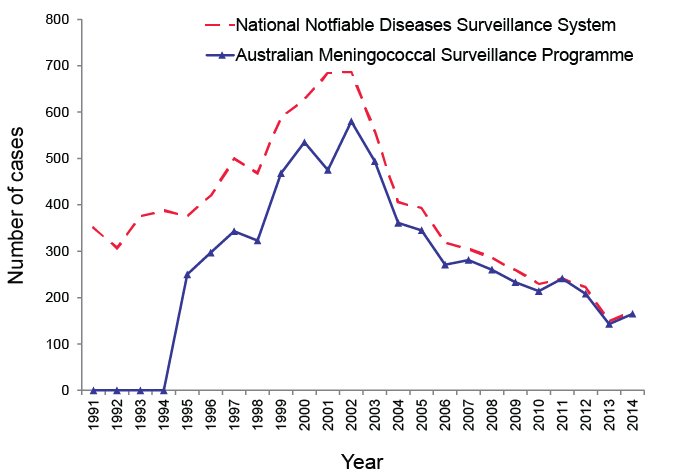 Anatomical site of samples and method of confirmation

Number of cases of invasive meningococcal disease by serogroup B, C, Y, W135 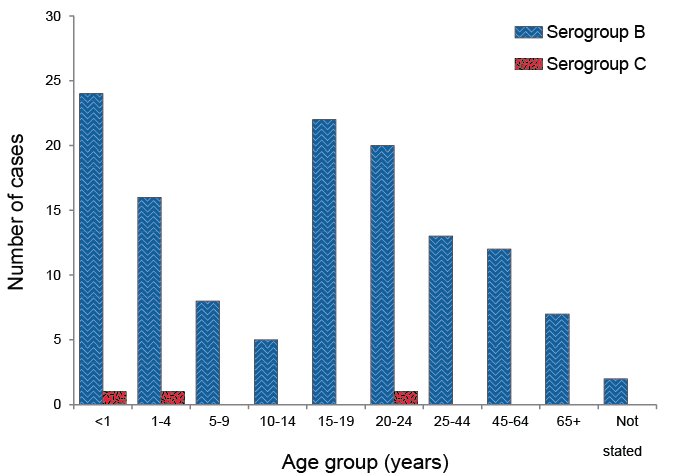 Figure 3: Number of porA genotypes (where data available) for serogroup B in cases of invasive meningococcal disease, Australia, 2014 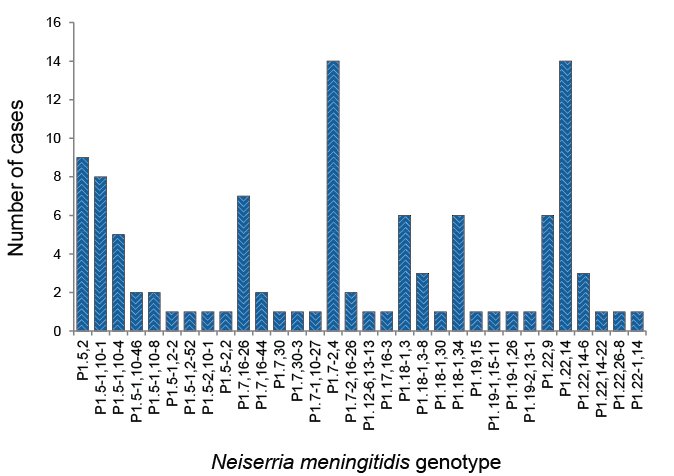 In 2014, there were 165 cases of laboratory confirmed IMD, representing 97% of the number of notifications to the NNDSS.2 This is both the second lowest number of cases reported since laboratory based surveillance for confirmed IMD cases (AMSP) began in 1994, and since notification data collection commenced in 1991. This represents less than one-third of the number reported in Australia in 2002 (n = 580), when IMD rates peaked in Australia. The introduction of the serogroup C vaccine to the national immunisation schedule in 2003 has led to a steady decline in the total number of both serogroup C, and the overall number of cases of IMD. The primary peak in IMD infection continues to be in children aged less than 5 years, as reported in previous years, with a secondary peak in adolescents.

As in previous years, genotypic data found no evidence of a substantial number of cases of IMD caused by N. meningitidis that have undergone genetic recombination. There have been concerns that the emergence of new and invasive subtypes following extensive vaccine use would occur given the capacity for genetic recombination within meningococci.5 Therefore the monitoring of meningococcal genotypes is an important part of the NNN program.

All isolates were susceptible to ceftriaxone and ciprofloxacin; whilst there were 2 IMD isolates that were resistant to rifampicin. The proportion of IMD isolates with penicillin MIC values in the less sensitive category in 2014 was 88%, and was the highest proportion recorded by the AMSP. In previous years the range was 62% to 75% in 1996 to 2006; 67% to 79% in 2007 to 2009; and 78% to 85% in 2010 to 2013. Thus indicating a right shift in penicillin MIC values of IMD isolates, however, in Australia, the incidence of penicillin resistance in N. meningitidis is very low.

In early 2014, a recombinant multi-component meningococcal B vaccine became available in Australia.(6) This vaccine is not on the immunisation register but is available for purchase privately. Therefore uptake is elective and the impact of its introduction is yet to be determined in this country. The AMSP continues to monitor the phenotypic and genotypic features of N. meningitidis causing IMD to inform treatment protocols and monitor prevention strategies.

Participants in the 2014 AMSP to whom isolates and samples should be referred, and enquiries directed, are listed below.