This Communicable Diseases Intelligence issue contains an analysis prompted by the recent increase in incidence of invasive meningococcal disease (IMD) due to meningococcal serogroup W (MenW) in Australia.

IMD due to MenW is emerging rapidly in Australia. This editorial provides readers with epidemiological data on MenW current to 2 December 2016 (hereafter YTD i.e. year-to-date); information on the coordinated national public health response; and some of the clinical and public health challenges posed by the emergence of MenW.

Seven of the 11 deaths from IMD notified to the Australian National Notifiable Diseases Surveillance System in 2016 YTD were due to MenW.

IMD tends to follow a seasonal pattern in Australia, with disease most common between June and September each year. In 2016 notifications peaked later, with 38 cases in both August and in October. Notifications substantially decreased in November 2016 (18 cases).

MenW is contributing to an increasing burden of IMD in all jurisdictions except the Northern Territory. Compared with 2015, the number of MenW notifications has more than doubled in 2016 YTD, in New South Wales (8 to 26 cases), Queensland (4 to 12 cases), Western Australia (4 to 12 cases), Victoria (17 to 41 cases), South Australia (0 to 4 cases) and Tasmania (1 to 4 cases). In 2016, the Australian Capital Territory reported its 1st case of MenW since 2008.

In 2016 YTD, MenW has been reported in all age groups, except in children aged 10–14 years, and accounts for almost half of IMD in adults aged 65 years or over.

Figure: Notifications and rates of invasive meningococcal disease, 2002 to December 2016,*Australia, by serogroup 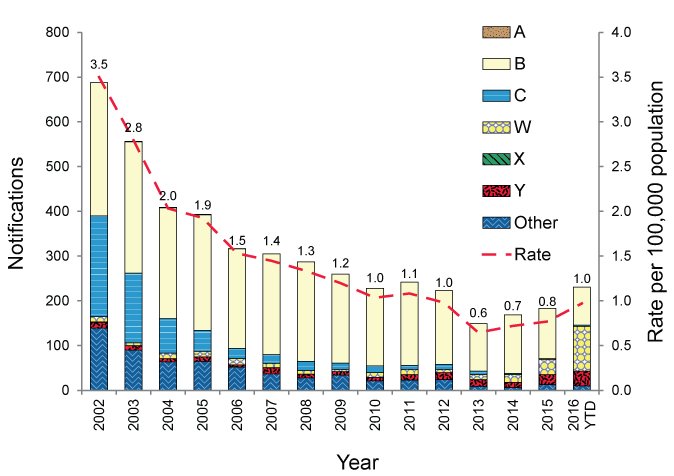 Significant outbreaks of MenW have occurred in countries including the United Kingdom,1 Brazil, Portugal, Argentina, Chile, Sweden and Taiwan.2 In Chile, the incidence of MenW increased from <0.1 per 100,000 population in 2010 to 0.7 per 100,000 population in 2012.3 The epidemiology of MenW in Australia currently has a similar appearance to increases seen internationally, but there remains uncertainty whether the disease in Australia will continue to evolve as experienced elsewhere, such as the United Kingdom and parts of South America.

What is being done nationally about the increase in meningococcal serogroup W?

The Australian Government Department of Health, in collaboration with the states and territories, is closely monitoring the epidemiology of IMD due to MenW in Australia in accordance with the Emergency Response Plan for Communicable Disease Incidents of National Significance (CDPlan).

Following a rapid assessment, the Chief Medical Officer of Australia established an incident management team, supported by advisory groups, with a focus on examining the current epidemiology of MenW and co-ordinating national responses to MenW. A further assessment will be undertaken in early 2017.

Clinicians are familiar with the importance of early diagnosis and early treatment of IMD, and the challenge of identifying severe sepsis from early, non-specific signs of infection. While cases of MenW may have features of bacteraemia or, less commonly, meningitis, less typical presentations have occurred, including septic arthritis and epiglottitis in older age groups. In the United Kingdom gastrointestinal symptoms were noted among adolescents, and pneumonia among young children.4 Our surveillance must therefore track changes in the age distribution, clinical manifestations, outcomes, and phenotypic and genotypic microbiology of IMD, and communicate findings to clinicians and public health practitioners in Australia.

Quadrivalent meningococcal vaccines that provide protection against IMD due to serogroups A, C, W and Y are available on private prescription in Australia. These are currently recommended for some occupational exposures (e.g. laboratory work), overseas travel to particular destinations, and medical conditions that increase the risk from IMD.5 They may also be prescribed for, and purchased electively by, persons who wish to be personally protected against these serogroups of IMD. The consideration of a population-based vaccination program entails various uncertainties and complexities.

The emergence of a new strain of meningococcal bacteria reflects evolving host-microbial ecology.6 While vaccination of particular population sectors can be expected to confer direct protection on those vaccinated, the trajectory of the recently emerged MenW strain in the wider Australian population is uncertain, with or without targeted vaccination programs.

Establishing a population-based vaccination program would entail determining the target population or populations so as to prevent disease, avert transmission, and contribute significantly to herd immunity in the wider population. Such a program would also need to be feasible for jurisdictions and providers to deliver and monitor and thoroughly evaluate, aiming to achieve early high coverage of the target populations, and to do so while continuing to deliver National Immunisation Program vaccines.

There remains the need for clinical vigilance by healthcare professionals to suspect and diagnose rare but serious meningococcal disease, and to ensure incident cases are promptly notified to the relevant public health agency.