This article describes the epidemiology of invasive meningococcal disease in Australia with a focus on the recent rise in disease caused by serogroup W.

Since 2013, there has been an increase in the number of notified cases of invasive meningococcal disease (IMD) due to serogroup W (MenW) in Australia. In response to this observed increase, the Communicable Diseases Network Australia convened a working group in 2015 to collate and analyse the epidemiology of MenW disease nationally. Enhanced surveillance data collected by jurisdictions were collated and analysed, and whole genome sequencing (WGS) of MenW isolates assessed the genomic relatedness of strains between 2012 and 2015. This report describes that epidemiology. Since 2013, the incidence and proportion of MenW has increased in Australia, rising from an average of 2% of all IMD cases annually (range 0% to 5%) between 1991 and 2012; to 8% (12/149) of cases in 2013, 10% (17/169) in 2014, and 19% (34/182) in 2015. Victoria has been the main affected state, with 50% (17/34) of national cases in 2015. MenW has affected older populations, with a median age between 2003 and 2015 being 44 years. During this period, case fatality was 10.7% (17/159), 2.3 times higher than for all IMD serogroups combined (4.7%, 173/3720). There were 7 deaths due to MenW in 2015 (CFR 21%). WGS has found the majority of Australian isolates cluster within a group of W:P1.5,2:F1-1:ST11 isolates from the United Kingdom and South America, regions where rapid spread and endemic transmission has occurred since 2009. The recent increase in incidence of MenW in Australia is evolving and is being closely monitored. Lessons learned from the international experience will be important in informing the public health response. Commun Dis Intell 2016;40(4):E454–E459.

Invasive meningococcal disease (IMD) is caused by the bacterium Neisseria meningitidis. Meningitis and septicaemia are the most common clinical presentations of IMD, and infection can lead to serious outcomes including death.1 Historically, most IMD in Australia has been caused by serogroups B (MenB) and C (MenC). The national rate of IMD notification has declined since the introduction of the MenC vaccine on the National Immunisation Program in 2003 but total numbers of IMD have been increasing since 2013.2,3 The incidence of IMD due to serogroup W (MenW) in Australia has been low. However, since 2013 there has been an increase in both the incidence and proportion of MenW relative to all IMD cases, notably in Victoria.4,5 There are international reports of a hypervirulent strain of MenW that began circulating in the United Kingdom and Chile in 2009 and has since become endemic in these countries. In this context the epidemiology of IMD in Australia was investigated, with a particular focus on MenW.

Notifications of IMD in Australia have been routinely collected in the National Notifiable Diseases Surveillance System (NNDSS), a collation of surveillance data collected locally in the 8 states and territories, since 1991. The NNDSS was used to compare the epidemiology of IMD due to non-MenW serogroups with that of MenW during the period 1991 and 2015. A sub-set of these data from 2003 were used to calculate case fatality ratios by serogroup and Indigenous status. Prior to this time, although these fields were available, they were not consistently complete.

Laboratory surveillance of IMD, including phenotypic and genotypic characteristics of invasive strains, has been conducted in Australia by reference laboratories in each state and territory (the Australian National Neisseria Network) since 1984, and these data supplement the NNDSS data.

Additional enhanced data (clinical presentation, hospitalisation status, co-morbidities, complications, risk factors, travel history) provided by states and territories were collated and analysed retrospectively, for MenW cases notified between 2012 and 2015. This period was selected to represent the time-frame in which MenW cases began to increase and for which enhanced clinical and whole genome sequencing (WGS) data were available.

WGS was performed by the Microbiological Diagnostic Unit (MDU) at the University of Melbourne or at the University of Western Australia (Western Australian isolates only), to determine the genomic relatedness of 34 Australian isolates of MenW between 2006 and 2015. Genomic DNA extraction and phylogenomic analysis was performed according to previously established methods within the MDU public health laboratory6 including the Nullarbor bioinformatic pipeline (https://github.com/tseemann/nullarbor). These 3 data sources were merged in a single Microsoft Excel dataset for this descriptive analysis.

Figure 1: Notifications of invasive meningococcal disease, Australia, 1991 to 2015, by serogroup and year 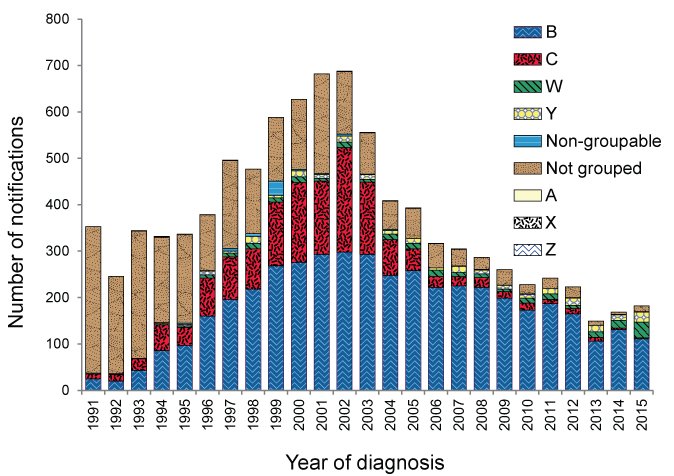 The largest increase in MenW notifications has occurred in Victoria, accounting for 50% (17/34) of all MenW cases reported nationally in 2015, and nearly 6 times the annual Victorian average of 2.9 cases between 1991 and 2011 (Figure 2).

Figure 2: Notifications of invasive meningococcal disease serogroup W, Australia, 2012 to 2015, by state and territory and month 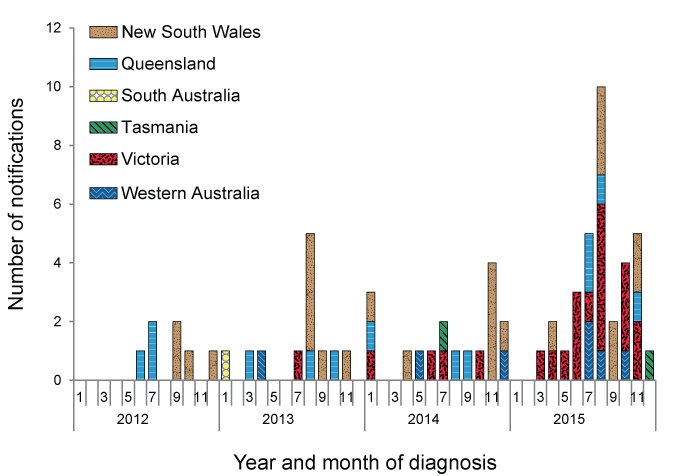 The age distribution of IMD notifications has a bimodal pattern, strongly influenced by the predominance of MenB notifications, with peaks in children less than 5 years of age, and in adolescents and young adults aged between 15 and 24 years. Between 1991 and 2015, males represented 53% of all IMD cases and predominated in all age groups less than 45 years of age, while females predominated in age groups 45 years or over.

While MenW had similar peaks in the 0–4 and 15–24 age groups, there were also a relatively larger proportion of cases among adults aged 45 years or over, as reflected in the older median age of MenW cases compared with IMD generally (Table 1). Increases in MenW notifications since 2013 were confined to those 15 years of age or over with children less than 10 years of age relatively unaffected to date (Figure 3). Males represented 53% (123/234) of all MenW cases between 1991 and 2015, and represented 60% of cases (75/126) in those less than 35 years of age. Females represented 67% (72/108) of MenW cases aged 35 years or over. 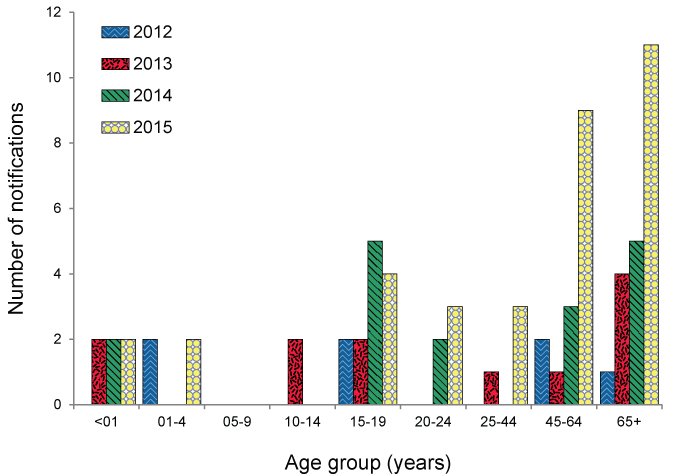 Eighty per cent (56/70) of the MenW cases had a typical clinical presentation of septicaemia, meningitis, or both while 20% (14/70) had an atypical presentation, including: septic arthritis (n=6), pneumonia (n=4), epiglottitis (n=3) and other (n=1). All 69 cases that had information available on their hospitalisation status were hospitalised. Twenty-three per cent (16/69) of hospitalised cases were admitted to an intensive care unit.

Vaccination against MenW is currently not routinely recommended in Australia excepting for those with medical conditions associated with an increased risk of meningococcal disease, for persons travelling overseas to areas in which MenW is endemic, or for those at occupational risk. Information on vaccination status was available for 35 (50%) of MenW cases, none of whom were vaccinated.

WGS of the 33 ST11 (and close variants) identified 2 main phylogenetic clusters of MenW, cluster 1 comprised 14 cases (12 from Victoria and 2 from New South Wales), which were all genetically closely related. Meanwhile, Cluster 2 comprised 18 cases (including 5 from Queensland, 6 from Western Australia, 5 from New South Wales, 2 from Victoria) and were not closely related.

MenW appears on average to cause more severe disease than other circulating IMD serogroups, with the CFR over the period 2003 to 2015 being 10.7% (20.6% in 2015), compared with 4.7% for all IMD over the same period. Between 2003 and 2015 the median age of onset for MenW (44 years) was higher than that of IMD generally (17 years) and the median age of death for MenW (40 years) was twice that of all IMD. The older age of MenW cases generally may at least partially explain the increased CFR for this serogroup. However, in the more recent period between 2012 and 2015, while the median age of MenW remained older (48 years) the median age of death was younger at 26 years. Victoria has had the highest number of cases of MenW (50% of all cases in 2015), and the most marked increase in incidence, and WGS suggests most isolates from Victoria, and some from New South Wales, may be genetically related, suggesting the possibility of transmission within this region.

There are no contemporary data on nasopharyngeal carriage of meningococci in Australia. Carriage studies might help to inform understanding of the underlying prevalence and transmission dynamics of MenW strains in Victoria and other states and territories, although sample size considerations make such studies difficult to undertake.

WGS has also identified that MenW in Australia is the same hypervirulent strain that has been circulating in the UK and South America since 2009.7,8 This is consistent with a previous review of Australian meningococcal epidemiology, which identified that intercontinental spread of clonal strains was responsible for the pattern of hypersporadic invasive disease.10

Cases due to this strain have rapidly increased to now comprise 25% of IMD cases in the UK in 2014 to 2015, and 59% of all cases in Chile in 2012. MenW is now considered to be endemic in these countries. The initial increase was seen in older adults, but rapidly spread across all age groups within 2 years, particularly in adolescents and infants.11 Disease severity has been high, and in response to this hypervirulent strain of MenW, targeted vaccination programs have been initiated in the UK and Chile.7,12

Conjugate MenC vaccine is part of the funded National Immunisation Program for all children at the age of 12 months. A multi-component MenB vaccine is registered for use in Australia, but is not part of the funded vaccination program. However, the Australian Technical Advisory Group on Immunisation has recommended it for use in children (particularly those <24 months of age) and adolescents aged 15–19 years.13 A number of safe and effective quadrivalent conjugate meningococcal vaccines(covering serogroups A, C, W and Y) are also registered for use in Australia, and The Australian Immunisation Handbook recommends their use in individuals of any age who have predisposing medical conditions associated with increased risk of IMD or who are planning travel to parts of the world where epidemics of group A, C, W or Y meningococcal disease occur.13 It is notable that based on WGS of the Australian MenW isolates to date, there has been no evidence of Hajj-related outbreak strains, suggesting that vaccination strategies for Hajj attenders may have been successful in preventing importation of these strains.4 Australian guidelines also recommend post-exposure vaccination of unimmunised household and other higher risk contacts of cases of IMD caused by serogroups C, A, W or Y.1 Individuals or parents who wish to protect themselves or their children against MenW could discuss receipt of a quadrivalent conjugate vaccine with their immunisation provider, via a private prescription.

The situation in Australia with regards to IMD due to MenW is evolving and continues to be closely monitored. A national working group has been formed under the auspices of the Communicable Diseases Network of Australia to further assess the situation and ensure consistent collection of enhanced data. Lessons learned from the international experience will be important in informing the public health response.

Authors would like to gratefully acknowledge the contribution of many colleagues in jurisdictional health authorities and laboratories who assisted with collection and analysis of case data and processing of specimens specifically including:

Members of the Microbiological Diagnostic Unit at the University of Melbourne for their work on WGS and Associate Prof Charlene Kahler, Shakeel Mowlaboccus and Alfred Tay for providing WGS data for Western Australian MenW cases.

Members of the National Neisseria Network

The Department of Health, Canberra