This report examines Australian rates and reaction types of adverse events following immunisation (AEFI) with BCG vaccine between 2009 and 2014 in children aged less than 7 years, to provide baseline data and inform future monitoring following the introduction of an unregistered vaccine from early 2016. It highlights the need for improved recording of both administered BCG vaccine doses and the reporting of BCG vaccine-related AEFI in order to facilitate close monitoring of BCG vaccine safety.

In recent years there has been a global shortage of bacille Calmette-Guérin (BCG) vaccine and, from September 2012, unregistered vaccines have needed to be used in Australia (a Danish product initially until the end of 2015, and a Polish product used in some jurisdictions from early 2016). We examined rates and types of adverse events following immunisation (AEFI) with BCG vaccine reported to the Therapeutic Goods Administration between 2009 and 2014 in children aged less than 7 years. Reporting rates of AEFI with BCG vaccine increased from 87 per 100,000 doses (registered Sanofi Pasteur product) in 2009 to 201 per 100,000 doses (unregistered Danish Statens Serum Institute product) in 2014, with Victoria having the highest rate each year. Substantial variation between jurisdictions exists, suggesting differential reporting of BCG vaccine doses administered and/or BCG vaccine-related AEFI. The most commonly reported reactions were abscess (31%), injection site reaction (27%) and lymphadenopathy/lymphadenitis (17%). This study provides baseline data on BCG vaccine safety to inform surveillance. Given the current use of unregistered vaccines in the context of vaccine supply issues, improved recording of both administered BCG vaccine doses and the reporting of BCG vaccine-related AEFI are required to facilitate close monitoring of vaccine safety. Commun Dis Intell 2016;40(4):E470–E474.

In Australia, bacille Calmette-Guérin (BCG) vaccine programs to protect against tuberculosis (TB) are funded by state and territory governments, rather than under the National Immunisation Program (NIP). Given the low incidence of TB in Australia, current Australian guidelines recommend BCG vaccination for groups of people who are at an increased risk of TB, in particular children aged less than 5 years who will be travelling to or living for an extended period of time in countries with a high prevalence of TB (annual TB incidence of 40 per 100,000 or more), and Aboriginal and Torres Strait Islander neonates in high-incidence communities (currently implemented in Queensland, the Northern Territory and northern South Australia only).1,2

BCG vaccine has been in use since 1921.3 As a result of repeated passage under different conditions in different laboratories, BCG vaccine strains have diverged genetically.4 The Sanofi Pasteur BCG vaccine is the only product registered for use in Australia but has been unavailable since a recall was issued in June 2012 due to a possible breach in the sterility of the product following a flood at the manufacturing plant.5 As of September 2012, an alternative unregistered vaccine (BCG Denmark-Serum Statins Institute (SSI)) was supplied under provisions of Section 19A of the Therapeutic Goods Act 1989, which allows for importation and supply of products that are registered in the specified countries under Section 19A(3) of the Therapeutic Goods Act 1989.6 However, this product has also been unavailable in Australia since 1 January 2016 and a critical shortage of BCG vaccine has been reported globally since 2013.7,8 From early 2016, another alternative unregistered Polish BCG vaccine (BCG-10) has been supplied in some jurisdictions in Australia. Whilst BCG-10 has been manufactured and registered for use in Poland since 19559 and is also available (but not registered) in some other European countries,7 Poland is not one of the Section 19A(3) specified countries. As such, it is only able to be supplied via the ‘Authorised Prescriber Scheme’ or Special Access Scheme.6

BCG vaccine is considered safe, however, it is one of the more reactogenic vaccines currently available and reactogenicity may differ between BCG vaccine strains.10 Currently there are no available longitudinal national data on adverse events following immunisation (AEFI) with BCG vaccine in Australia. To provide baseline data and inform monitoring following introduction of BCG-10 vaccine, or other unregistered vaccines, we examined rates and reaction types of BCG vaccine-related AEFI between 2009 and 2014 in children aged less than 7 years, by jurisdiction and vaccine type.

De-identified information on BCG vaccine-related AEFI that were reported to the Therapeutic Goods Administration and entered into the Adverse Drug Reactions System (ADRS) database were extracted from a dataset released to the National Centre for Immunisation Research and Surveillance in March 2015. AEFI data where BCG vaccine was recorded as suspected of involvement were included in the analysis for children vaccinated at less than 7 years of age between 1 January 2009 and 31 December 2014.

The number of BCG vaccine doses administered was obtained from the Australian Childhood Immunisation Register (ACIR). AEFI reporting rates per 100,000 doses and 95% confidence intervals were calculated and analysed by jurisdiction and age group. Adverse reaction types were also examined. Using the date of vaccination, we determined the number of BCG vaccine doses that had been administered for each vaccine product (Sanofi Pasteur or Denmark-SSI) and the number and reporting rate of AEFI related to each of these products.

Table 1 shows the number of BCG vaccine doses recorded on the ACIR between 2009 and 2014, by jurisdiction. Queensland is recorded as administering the highest number of doses each year. The ADRS database for the period 1 January 2009 to 31 December 2014 included a total of 110 AEFI reports related to BCG vaccination in children aged less than 7 years. Fifty-eight per cent of BCG AEFI reports were for males, and 68% were for children aged less than 1 year. The rate of reported BCG-related AEFI in children aged less than 7 years varied substantially between Australian states and territories, with Victoria having the highest rate each year (Table 1). 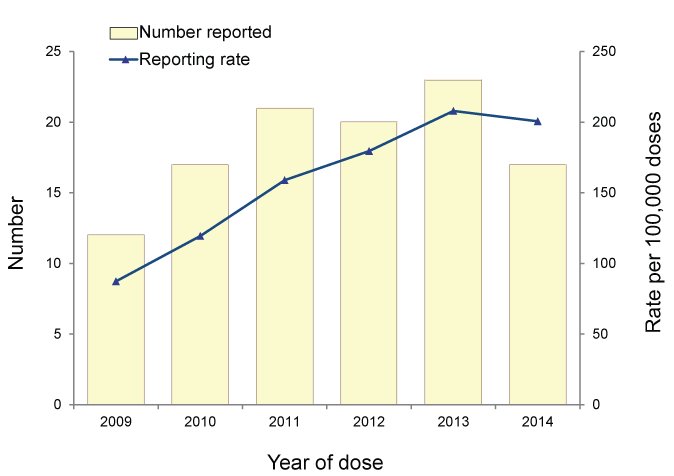 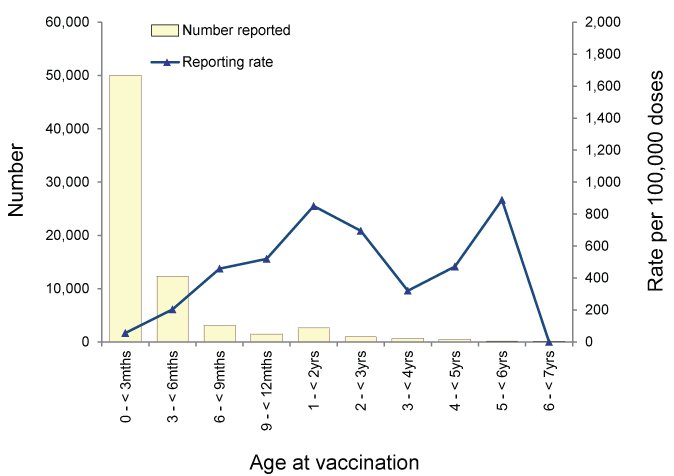 The large majority of BCG doses were recorded as administered to children aged less than 3 months, with the rate of reported BCG vaccine-related AEFI in this age group relatively low at 56 per 100,000 doses (Figure 2).

The rate of reported BCG vaccine-related AEFI in children aged less than 7 years appears to have been increasing in Australia since 2009. Consistent with previously published Australian and international data, we found that 58% of BCG AEFI reports were for male children,11,12 and that the rate of reported AEFI generally increased with increasing age at time of BCG vaccination.11,13 The most frequently reported BCG-related AEFI in children under the age of 7 years were localised abscesses, injection site reactions and lymphadenopathy, consistent with other published data from Australia and overseas.9,11–14

Our data shows substantial variation between jurisdictions in the reporting of BCG doses administered and BCG-related AEFI. However, this could be influenced by differential reporting of vaccination and/or AEFI. As BCG vaccination is not funded under the NIP and there are no incentives for immunisation providers to report BCG vaccination to the ACIR, it is likely that there is under-reporting of BCG vaccine dose administration. Under-reporting of AEFI is also acknowledged to be a major limitation of all passive AEFI surveillance systems including those used in Australia, due to the reliance on voluntary reporting by immunisation providers, other health professionals and consumers.15 As such the calculation of AEFI rates in our study is limited by potential inaccuracies in both numerator and denominator data. There has also been a general increase in reporting of AEFI related to other vaccines in children over our study period.16 Our finding that Victoria consistently had the highest BCG vaccine-related AEFI reporting rate could be in part due to the establishment of an enhanced passive surveillance system in 2007, which was shown to significantly improve AEFI reporting rates in its first 3 years of operation.17

Whilst our study cannot draw any conclusions about the different reactogenicity of the Sanofi product and the Denmark SSI product, due to the limitations discussed above, reactogenicity is reported to differ between BCG vaccine strains.10 The Polish BCG-10 vaccine that has been used in some jurisdictions in Australia in 2016 and is not included in this study, is derived from yet another BCG strain, BCG-Moreau. Although a low (0.2%–0.6%) frequency of BCG-AEFI has been reported from passive surveillance in Poland, understanding of its vaccine safety profile is based on this single study, and should be prospectively monitored using baseline data on other strains from Australia.9