This report presents a summary and analysis of outbreaks of bacterial toxin mediated foodborne gastroenteritis in Australia, using data collected between 2001 and 2013.

Bacterial toxin-mediated foodborne outbreaks, such as those caused by Clostridium perfringens, Staphylococcus aureus and Bacillus cereus, are an important and preventable cause of morbidity and mortality. Due to the short incubation period and duration of illness, these outbreaks are often under-reported. This is the first study to describe the epidemiology of bacterial toxin-mediated outbreaks in Australia. Using data collected between 2001 and 2013, we identify high risk groups and risk factors to inform prevention measures. Descriptive analyses of confirmed bacterial toxin-mediated outbreaks between 2001 and 2013 were undertaken using data extracted from the OzFoodNet Outbreak Register, a database of all outbreaks of gastrointestinal disease investigated by public health authorities in Australia. A total of 107 laboratory confirmed bacterial toxin-mediated outbreaks were reported between 2001 and 2013, affecting 2,219 people, including 47 hospitalisations and 13 deaths. Twelve deaths occurred in residents of aged care facilities. Clostridium perfringens was the most commonly reported aetiological agent (81 outbreaks, 76%). The most commonly reported food preparation settings were commercial food preparation services (51 outbreaks, 48%) and aged care facilities (42 outbreaks, 39%). Bacterial toxin outbreaks were rarely associated with food preparation in the home (2 outbreaks, 2%). In all outbreaks, the primary factor contributing to the outbreak was inadequate temperature control of the food. Public health efforts aimed at improving storage and handling practices for pre-cooked and re-heated foods, especially in commercial food preparation services and aged care facilities, could help to reduce the magnitude of bacterial toxin outbreaks. Commun Dis Intell 2016;40(4):E460–E469.

Two different types of bacterial toxins can cause gastroenteritis. Preformed toxins are produced by Staphylococcus aureus and Bacillus cereus (emetic toxin).1,2 These toxins are formed in the food and are resistant to heat, so the risk of illness is not removed by cooking.3,4 Onset of illness is rapid, between 30 minutes and 6 hours, and vomiting is the most commonly reported symptom.3 In vivo toxins are produced by Clostridium perfringens and B. cereus (diarrhoeal toxin), and are formed in the digestive tract after food containing the bacteria is consumed. While adequately cooking food can kill the bacterial vegetative cells, both C. perfringens and B. cereus produce heat-resistant spores that can survive cooking and subsequently regerminate after cooking. Onset of illness is between 6 and 16 hours. Diarrhoea is commonly reported and vomiting is not common.5,6 All 3 toxin-producing bacteria are ubiquitous in the environment, and S. aureus is a normal component of human flora.7

Individual cases of S. aureus, B. cereus and C. perfringens gastroenteritis are not notifiable diseases in Australia, so gastroenteritis caused by these pathogens are only reported if they are part of an outbreak, defined as two or more cases of the same illness with a common source. Gastrointestinal outbreaks are collated in the national OzFoodNet Outbreak Register.

OzFoodNet was established in 2000 by the Australian Government as a network of epidemiologists with representatives in every state and territory. OzFoodNet focuses on enhanced surveillance for foodborne illnesses.8 The OzFoodNet Outbreak Register is a Microsoft Access database maintained by OzFoodNet Central (at the Australian Government Department of Health), and has been in use since 2001. State and territory-based OzFoodNet epidemiologists collect and provide summary data quarterly to OzFoodNet Central on all gastrointestinal outbreaks investigated in their jurisdiction. Summaries of outbreaks are published in OzFoodNet quarterly and annual reports.9,10

The aim of this study was to describe the epidemiology of bacterial toxin-mediated foodborne outbreaks in Australia between 2001 and 2013, and to identify high risk groups and risk factors to inform prevention measures.

Outbreak Register data were extracted on 2 February 2015. Variables analysed included aetiology, laboratory confirmation of aetiology, food vehicle, state or territory of outbreak, year of outbreak, number of cases, number hospitalised, number of deaths, median age of cases, per cent of cases for each gender, median incubation period and duration, number of cases reporting each symptom, factors contributing to the outbreak (microbial growth and microbial survival), the setting in which food was prepared, the consumption setting and the free text remarks variable. Application of inclusion and exclusion criteria was performed in Microsoft Excel, and data cleaning and analysis was performed in StataSE 13 (Stata Corp, College Station, TX, USA). Missing data, nonsensical data and answers of ‘unknown’ were treated as unknown responses. Completeness for all variables was defined as useable data, i.e. values other than missing or unknown.

All confirmed bacterial toxin outbreaks included in this analysis were laboratory confirmed according to simplified Centers for Disease Control and Prevention (CDC) guidelines for bacterial toxin outbreaks.11 Outbreaks were classified as laboratory confirmed if the aetiological agent was isolated or enterotoxin was detected in clinical specimens from 2 or more cases, or at least 105 organisms were isolated per gram of epidemiologically implicated food.11 Confirmed bacterial toxin-mediated foodborne or suspected foodborne outbreaks with onset between 2001 and 2013 were included. Five aetiology categories were created for analysis:

For further attribution of outbreaks caused by B. cereus, the following criteria based on the known characteristics of B. cereus illness were used as probable case definitions:2

Confirmed or suspected food vehicles with a reasonable level of suspicion (for example the implicated food was the only food that was eaten by most or all cases) that were detailed in the Outbreak Register in either the food vehicle variable or in the free-text remarks variable were retained for analysis. To simplify analysis, the food vehicles were categorised according to the method of food preparation as proposed by Weingold et al.12 Only the information provided in the Outbreak Register was used to apply categories and no assumptions were made about foods commonly served together. An additional food variable was created to record if a high starch food, such as rice or pasta, was reported. The number and percentage of outbreaks reporting each food category are reported.

Median values and ranges were calculated for numerical variables including number of cases, number of hospitalisations, number of deaths, median age, percentage of each gender, median incubation period and duration and percentage for each symptom. Histograms were constructed in Microsoft Excel using outbreak data aggregated by year based on onset date of the outbreak. Overall rates for each state and territory were calculated using population data from the Australian Bureau of Statistics,13 and compared using Poisson regression using StataSE 13. 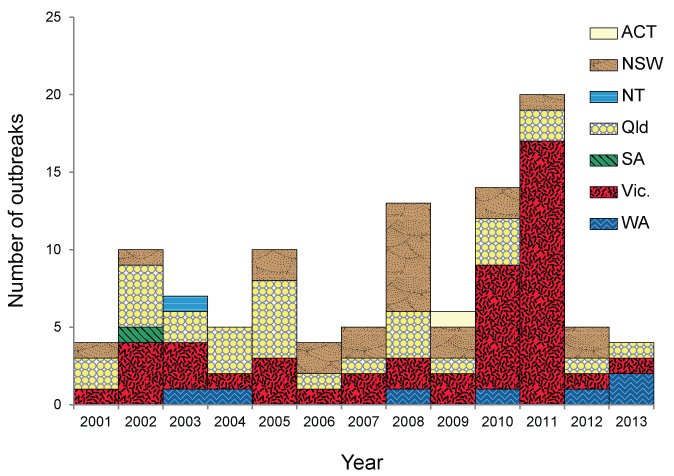 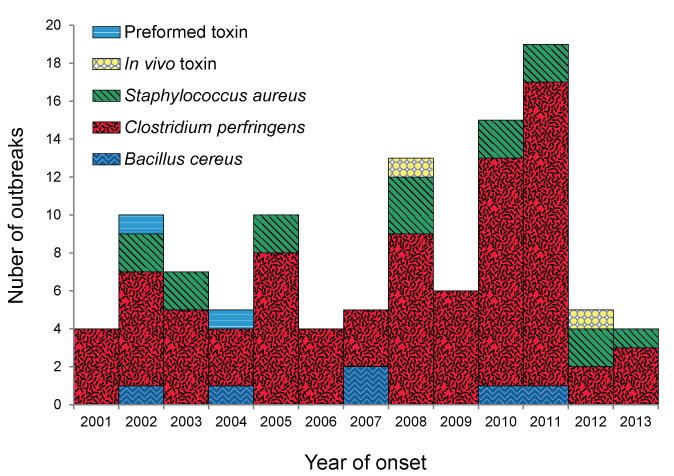 The most frequently reported category of food associated with bacterial toxin-mediated foodborne outbreaks was the category of ‘solid masses of potentially hazardous foods’, such as lasagne, which was reported in 31 outbreaks (29%) (Table 4). An additional 17 outbreaks (16%) were associated with ‘liquid or semi-solid mixtures of potentially hazardous foods’, such as gravy. Half of the outbreaks (13 outbreaks) caused by S. aureus, B. cereus, preformed toxin and in vivo toxin had a starch-based food such as rice, pasta or noodles listed as part of the implicated food vehicle, whereas only 5 outbreaks (6%) caused by C. perfringens had starch as part of the food vehicle.

All bacterial toxin-mediated outbreaks that had a contributing factor for microbial growth recorded (63 outbreaks) had at least one contributing factor for microbial growth that can be categorised as temperature abuse, including ‘slow cooling’, ‘inadequate refrigeration’, ‘delay between preparation and consumption’, ‘insufficient cooking’, ‘inadequate thawing’ or ‘inadequate hot holding temperature’ (Table 5). The temperature abuse growth factor was confirmed for 32 (51%) of these outbreaks. Confirmation was via observation during inspection for 15 outbreaks, verbally during inspection for 15 outbreaks and was only confirmed with measured evidence for 2 outbreaks. The temperature abuse growth factor was assumed or suspected, or no level of evidence was provided for the remaining 31 outbreaks.

The food implicated in bacterial toxin-mediated foodborne outbreaks was prepared and eaten in the same location for 78 outbreaks (73%). The implicated food in the remaining 29 outbreaks (27%) was prepared in a commercial location before being eaten in the home, for example eating a takeaway meal from a restaurant at home. The most commonly reported food preparation locations for all aetiologies were restaurants (21 outbreaks, 20%) and commercial caterers (16 outbreaks, 15%; Table 7). Only 2 outbreaks (2%) were due to food prepared in a private home. Food preparation businesses (including restaurants, commercial caterers, takeaway locations, grocery stores, delicatessens, fairs, festivals and mobile food services) were the most commonly reported food preparation setting associated with bacterial toxin-mediated foodborne outbreaks, (51 outbreaks, 48%). A total of 42 outbreaks (39%), all caused by C. perfringens (alone or with B. cereus in the in vivo toxin category), were associated with meals prepared and/or consumed in aged care facilities (Table 8). The incidence of aged care associated outbreaks varies from year to year, ranging from no aged care outbreaks in 2001 to 75% of outbreaks in 2013 and a median of 25% of outbreaks per year. Restaurants were the second most frequently reported location for consumption of food (21 outbreaks, 20%; Table 8).

The median incubation periods and symptomology of S. aureus,31 B. cereus6and C. perfringens5 in Australian outbreaks were similar to that observed elsewhere. Only 1 outbreak caused by B. cereus was likely to have been caused by the emetic toxin (17%). The food vehicle for this outbreak included rice (fried rice and honey chicken), consistent with findings that the B. cereus emetic toxin is associated with rice.2,3,32 This distribution of a greater number of diarrhoeal outbreaks than emetic is consistent with the epidemiology of B. cereus in North America and Northern Europe, and different to that seen in countries with high rates of rice consumption such as Japan.2

The 2 most commonly reported food vehicle categories were ‘solid masses of potentially hazardous foods’ and ‘liquids or semi-solid mixtures of potentially hazardous foods’. Without careful temperature control, both of these categories of foods can spend a long period of time at temperatures that promote microbial growth due to the density of the food. This finding is in contrast with a study examining bacterial toxin-mediated foodborne outbreaks in the United States of America (USA), which found that ‘roasted meat and poultry’ was the most commonly reported food category.33

All outbreaks that reported a contributing factor for microbial growth and 85% of outbreaks that reported a contributing factor for microbial survival reported at least one factor that was associated with temperature abuse of the food, although this was not always confirmed. Temperature abuse refers to inappropriate holding of food products between 4°C and 60°C, which is the optimal temperature for growth of most pathogenic microorganisms.34 This is a particular problem with toxin-producing bacteria as even reheating or cooking the food does not remove the preformed toxin (S. aureus and emetic B. cereus)or the bacterial spores (C. perfringens and diarrhoeal B. cereus).2,4,35

The most commonly reported location for preparation of the food vehicle that was implicated in bacterial toxin-mediated foodborne outbreaks was at food preparation businesses such as restaurants and commercial caterers (48%), while the implicated food was prepared in private homes in only 2% of the outbreaks. This is in contrast to a study in the USA, which found that 16% of bacterial toxin-mediated outbreaks were associated with food prepared in the home.33 Similarly, a study in the European Union found that homes were the most commonly reported setting for outbreaks of S. aureus and the third most commonly reported setting for outbreaks of C. perfringens.36However, the European Union study did not distinguish between preparation and consumption settings. Education of all food preparation services on safe food practices, with a focus on increased awareness of temperature abuse of foods that are difficult to cool or warm rapidly, including high risk dishes, would reduce the incidence of bacterial toxin-mediated foodborne outbreaks in food preparation businesses.

In conclusion, bacterial toxin-mediated foodborne outbreaks are most frequently reported to be associated with dense large volume foods prepared by food preparation businesses such as restaurants, and in aged care facilities. As bacterial toxin-mediated outbreaks disproportionately affect the vulnerable residents of aged care facilities, education and training of food handlers in these facilities should be a priority.