Flutracking is a national online community influenza-like illness (ILI) surveillance system that monitors weekly ILI activity and impact in the Australian community. Data from this report showed that the 2015 national Flutracking influenza season was similar in community ILI levels and impact to 2014.

Flutracking is a national online community influenza-like illness (ILI) surveillance system that monitors weekly ILI activity and impact in the Australian community. This article reports on the 2015 findings from Flutracking. From 2014 to 2015 there was a 38.5% increase in participants to 27,824 completing at least 1 survey with a peak weekly response of 25,071 participants. The 2015 Flutracking national ILI weekly fever and cough percentages peaked in late August at 5.0% in the unvaccinated group, in the same week as the national counts of laboratory confirmed influenza peaked. A similar percentage of Flutracking participants took two or more days off from work or normal duties in 2015 (peak level 2.3%) compared with 2014 (peak level 2.5%) and the peak weekly percentage of participants seeking health advice was 1.6% in both 2014 and 2015. Flutracking fever and cough peaked in the same week as Influenza Complications Alert Network surveillance system influenza hospital admissions. The percentage of Flutracking participants aged 5 to 19 years with cough and fever in 2015 was the highest since 2011. The 2015 season was marked by a transition to predominantly influenza B strain circulation, which particularly affected younger age groups. However, for those aged 20 years and over, the 2015 national Flutracking influenza season was similar to 2014 in community ILI levels and impact. Commun Dis Intell 2016;40(4):E512–E520.

The main aims of Flutracking are to:

In this report, we aim to describe

The Flutracking surveillance system was in operation for 26 weeks in 2015, from the week ending Sunday 26 April to the week ending Sunday 18 October 2015. The cohort of participants is maintained year to year and is boosted by an annual recruitment drive, which usually runs from March to May. In 2015, the recruitment drive was from 1 April to 6 May. Participants may opt out of participating at any time. The recruitment methods in 2015 were similar to those used in 2007–2014.1

The weekly survey questions evolved from 2007–2012.1,7 but no changes have been made to the questions from 2013 onwards.

Descriptive statistics were tabulated and summarised for each state and territory, by age group, gender, education level, Aboriginal and Torres Strait Islander status, and vaccination status.

We analysed the proportion of vaccinated participants aged less than 10 years of age by whether there was at least 1 participant in their household who was a healthcare worker with patient contact.

The mean proportion of participants who responded by 24 hours after the survey was distributed was calculated across all 26 weeks of surveillance. This calculation was also stratified by age groups. Time taken to respond to the survey was calculated for primary participants only (that is, those responding for themselves and possibly other household members). For participants in Western Australia, 2 hours were subtracted from their time to respond, to account for differences in time zones. No adjustment was made for the 30 minute time zone difference in South Australia and the Northern Territory.

Weekly percentages of community ILI were calculated. ILI percentages, not stratified by vaccination status, were compared with FluCAN admissions to hospital for influenza from 2012 to 2015.

The weekly percentage of participants from 2011 to 2015 who had 1) fever and cough and 2 or more days off work or normal duties; and 2) who visited a general practitioner, emergency department or were admitted to hospital due to fever and cough was compared. 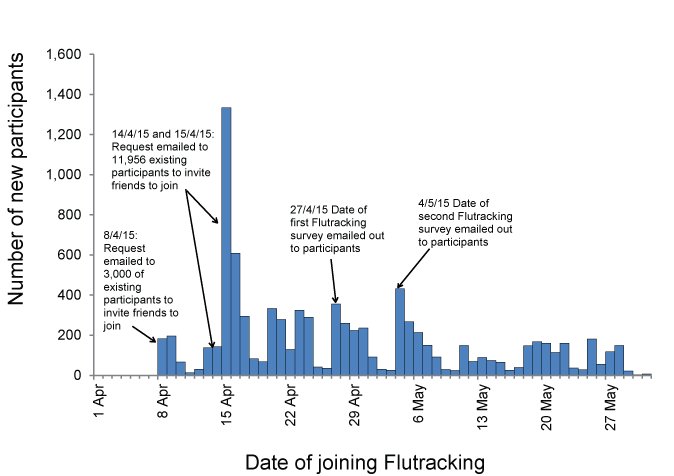 The Western Australia Department of Health recruited an additional 1,873 participants into Flutracking to support a research project in 2015.

The 30 organisations with the highest number of participants in Flutracking for 2014 were emailed a ‘Congratulations’ certificate and asked to invite any new employees to participate in Flutracking in 2015.

As a result of the above recruitment strategies and media coverage a total of 9,987 participants joined the survey in 2015, compared with the 5,099 that joined in 2014.

There were 27,824 participants who completed at least 1 survey in 2015, compared with 20,087 in 2014 (a 38.5% increase) (Figure 2). At a state and territory level, increases in peak weekly participation were most marked in Western Australia, the Australian Capital Territory, Queensland, and Victoria. In 2015, Tasmania had the highest rate of Flutracking participation per 100,000 persons, followed by the Northern Territory and the Australian Capital Territory (Table 1). New South Wales, Victoria, and Queensland all had lower rates of participation than the general Australian population (Table 1).

Figure 2: Number of participants who completed at least one survey, Australia, 2006 to 2015, by year 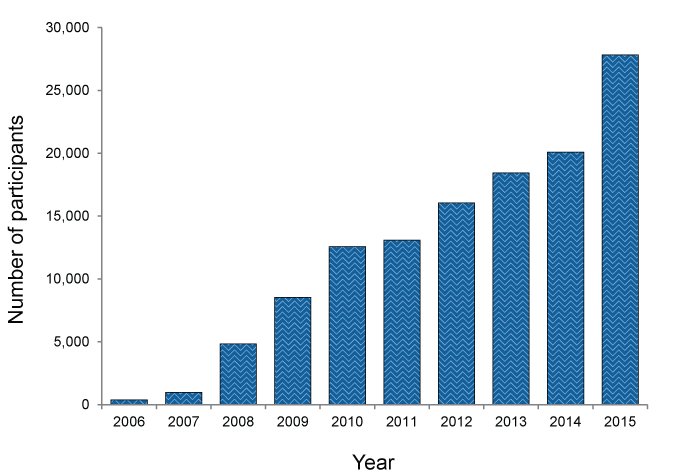 Of the participants who completed at least 1 survey and responded to each of the demographic questions in 2015, 59.0% were aged 35–64 years, 61.6% were female, 61.7% had completed a bachelor degree, graduate diploma or certificate or postgraduate degree, and 1.3% identified as Aboriginal and/or Torres Strait Islander (Table 2). Compared with the national profile, the following demographic groups were underrepresented among Flutracking participants: 0–34 years and 65 years or over age groups; males; Aboriginal and Torres Strait Islander participants; and participants with lower levels of educational attainment.

Time to respond to survey each week

Figure 3: Percentage of participants vaccinated with the seasonal influenza vaccine at the final survey of each year, by participant characteristics, Australia, 2007 to 2015, by year 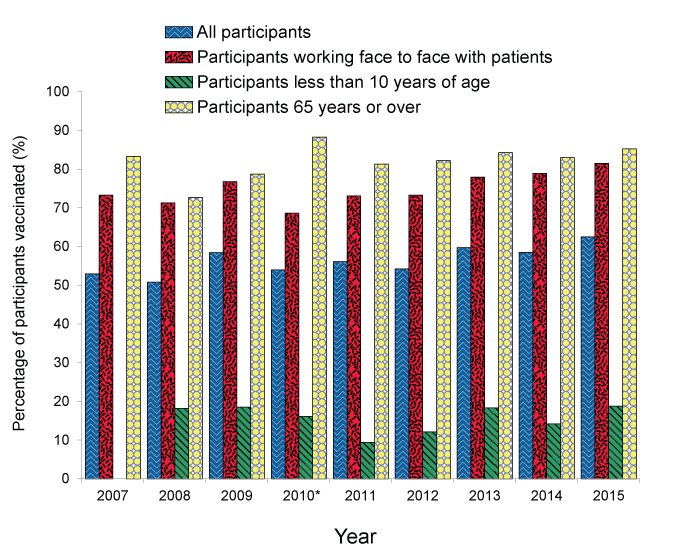 Figure 4: Fever and cough percentage stratified by vaccination status, Australia, 2009 to 2015, by week 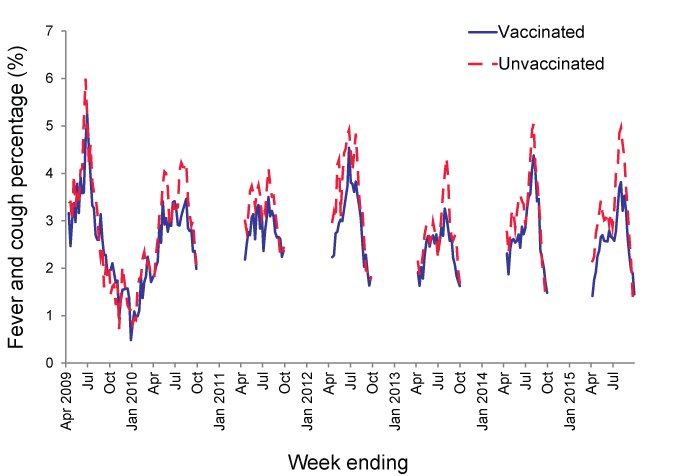 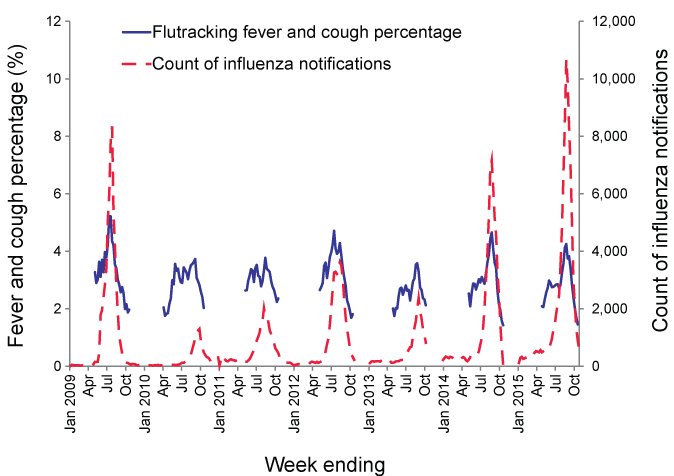 * Not stratified by vaccination status

Time off work or normal duties and health seeking behaviour 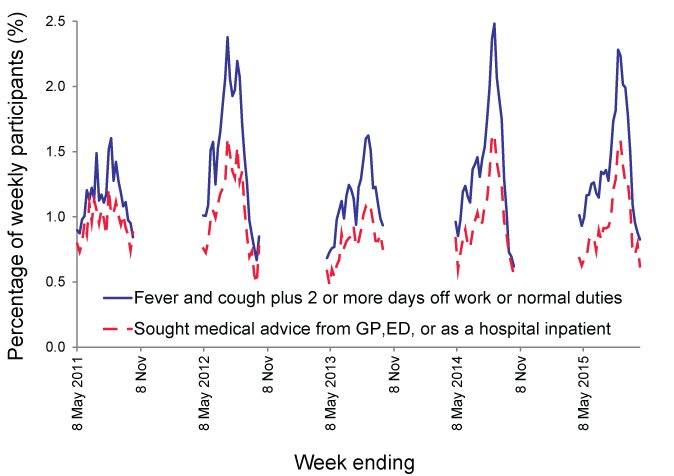 * The denominator is the number of weekly participants.

Figure 7: Percentage of Flutracking participants with fever and cough compared with FluCAN influenza hospital admissions, Australia, 2012 to 2015, by week 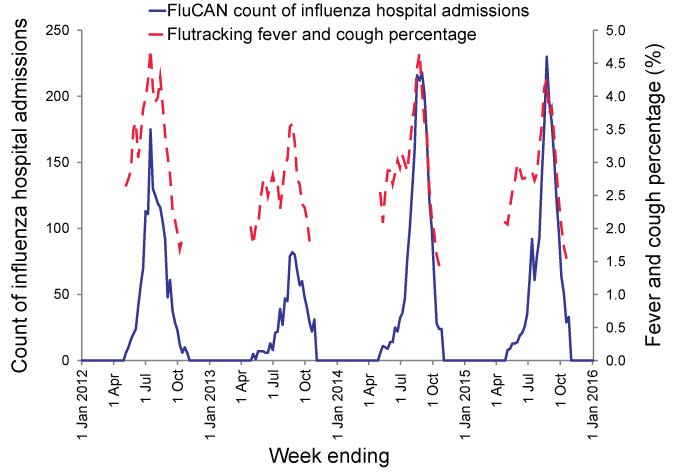 Percentage of participants with influenza-like illness by age group

The percentage of Flutracking participants aged 5–19 years with cough and fever in 2015 was the highest since 2011 (Figure 8).

Figure 8: Percentage of participants with fever and cough episodes, by year and age group, Australia, 2012 to 2015* 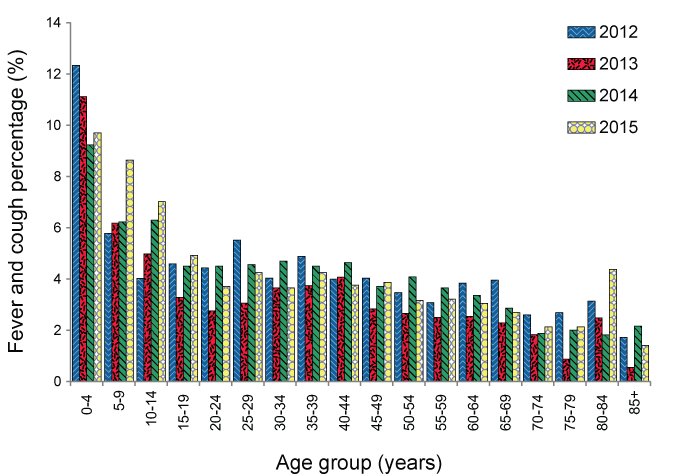 * Only the 4 peak weeks of fever and cough in Australia for each year were included.

As the recruitment strategies were similar in 2015 to 2014, the distribution of participants among each age group, gender, education level, and Aboriginal and Torres Strait Islander status group has remained similar to 2014. There is still under-representation of participants in the 0–34 years and 65 years or over age groups, males, participants with non-tertiary education and Aboriginal and Torres Strait Islander participants. This highlights the need for more targeted recruitment strategies reaching out to under-represented groups through consultation and targeted recruitment campaigns.

Based on Flutracking fever and cough weekly percentages, the peak community ILI levels in the 2015 season were slightly lower than the peak community ILI levels in the 2012 and 2014 seasons. However, national influenza laboratory notifications showed an increase in influenza cases from 2014 to 2015. This discrepancy between the relative magnitude of the influenza season as described by laboratory notifications and Flutracking most likely reflected an increase in laboratory testing. Fielding et al noted that public funding for the purchase of new polymerase chain reaction (PCR) testing equipment following the 2009 H1N1 influenza pandemic and Medicare reimbursement for PCR testing, may have influenced provider practice and driven increases in influenza testing.10

Flutracking analyses suggest similar levels of ILI in the community in 2015 and 2014, with slightly lower time off normal duties in 2015 and similar health care seeking behaviour. FluCAN’s influenza peak number of weekly hospital admissions also suggested that the 2014 and 2015 seasons were not meaningfully different. The total number of FluCAN influenza hospital admissions for 2015 were similar to 2014 (2,060 in 2015 as compared with 2,092 in 2014). Compared with 2014, when there was a mix of influenza A H1N1 and H3N2 with lower levels of influenza B, 2015 was marked by a transition to predominantly influenza B strain circulation with the B/Victoria lineage dominating the B/Yamagata lineage by the end of the influenza season.6 Influenza B has been regarded as less severe than influenza A infection but no difference was identified in a recent comparison of severity of influenza A and B infection based on outcomes among hospitalised patients.11 The similar levels of severity overall in 2014 and 2015 seen in Flutracking and FluCAN supports this.

The predominance of influenza B activity in 2015 particularly affected younger age groups. Flutracking ILI percentages were at their highest since 2011 in the 5–19 years age groups and this was reflected in laboratory surveillance.6 In summary, in 2015 Flutracking demonstrated that the severity of the 2015 season at the community level was similar to 2014, except in participants under 20 years of age who were likely impacted by circulating influenza B strains.

All authors declare that they have no competing interests.

The authors would like to acknowledge the University of Newcastle for their continued support, and the Australian Government Department of Health and the Hunter Medical Research Institute for their funding and support. We would also like to acknowledge Stephen Clarke for software and database development, and John Fejsa for his contribution to the design of the project, and the thousands of Flutracking participants who give their time freely each week to contribute to influenza surveillance.