The Influenza Complications Alert Network (FluCAN) is a sentinel hospital-based surveillance program that operates at sites in all states and territories in Australia. This report summarises the epidemiology of hospitalisations with laboratory-confirmed influenza during the 2015 influenza season. In this observational study, cases were defined as patients admitted to one of the sentinel hospitals with an acute respiratory illness with influenza confirmed by nucleic acid detection. During the period 1 April to 30 October 2015 (the 2015 influenza season), 2,070 patients were admitted with confirmed influenza to one of 17 FluCAN sentinel hospitals. Of these, 46% were elderly (≥ 65 years), 15% were children (< 16 years), 5% were Indigenous Australians, 2.1% were pregnant and 75% had chronic co-morbidities. A high proportion were due to influenza B (51%). There were a large number of hospital admissions detected with confirmed influenza in this national observational surveillance system in 2015 with case numbers similar to that reported in 2014. The national immunisation program is estimated to avert 46% of admissions from confirmed influenza across all at-risk groups, but more complete vaccination coverage in target groups could further reduce influenza admissions by as much as 14%. Commun Dis Intell 2016;40(4):E521–E526.

A case was defined as a patient admitted to hospital with influenza confirmed by nucleic acid testing (NAT). For each case, a control was the next tested patient admitted to hospital for an acute respiratory illness where the influenza NAT was negative. Surveillance is conducted from early April to end October (with follow up continuing to the end of November) each year. Admission or transfer to an intensive care unit (ICU) included patients managed in a high dependency unit. The onset date was defined as the date of admission except for patients where the date of the test was more than 7 days after admission, where the onset date was the date of the test. The presence of risk factors and comorbidities was ascertained from the patient’s medical record. Restricted functional capacity was defined as those who were not fully active and not able to carry out all activities without restriction prior to the acute illness.5

Vaccine coverage was estimated from the proportion of vaccinated test negative control patients in each age group, stratified by the presence of chronic comorbidities. Vaccine effectiveness was estimated from the odds ratio of vaccination in cases vs controls using the formula , with the odds ratio calculated from a conditional logistic regression, stratified by site and adjusted for age group, the presence of chronic comorbidities, pregnancy and Indigenous ethnicity. The proportion of avoidable admissions was calculated using the formula where is the number of unvaccinated individuals and is the number of vaccinated individuals. The proportion of averted admission was calculated using the formula.

During the period 1 April to 30 October 2015 (the 2015 influenza season), 2,070 patients were admitted with laboratory-confirmed influenza to one of 17 FluCAN sentinel hospitals. The peak weekly number of admission was in mid-August (week 33) (Figure). The majority of cases were due to influenza B (51%). The proportion due to influenza B varied by site from 49 of 136 cases (36%) at the Royal Hobart Hospital to 60 of 88 cases (68%) at the Princess Alexandra Hospital, Brisbane.

Figure: Date of admission in patients hospitalised with confirmed influenza 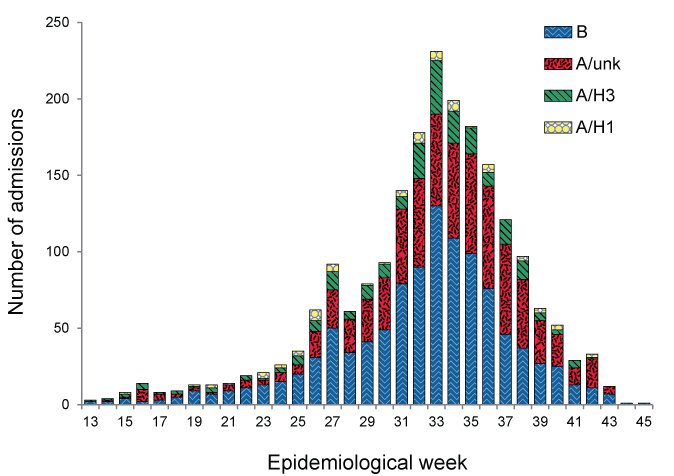 By week beginning on listed date; representing date of admission (or date of influenza diagnosis if acquired after more than 7 days in hospital).

For 1,546 patients with laboratory-confirmed influenza where the duration of symptoms was known, the median duration of symptoms prior to admission was 3 days (interquartile range (IQR): 2, 5 days). Of all cases, 102 cases (4.9%) were diagnosed more than 7 days after admission and therefore were likely to be hospital-acquired. Radiological evidence of pneumonia was present in 377 patients (18%).

Of all cases, 107 patients (5.2%) were initially admitted to ICU and a further 47 (2.3%) were subsequently transferred to ICU after initial admission to a general ward. There were no statistically significant differences in the risk of admission by influenza type. Factors associated with ICU admission are detailed in Table 3.

The mean length of hospital stay for all patients was 5.0 days. Admission to ICU was associated with a mean hospital length of stay of 12.7 days compared with those not admitted to ICU (4.4 days). Of the 2,053 patients where hospital mortality status was documented, 43 patients died (2.1%), which included 21 patients in ICU. Case fatality was higher in the elderly (31/950; 3.3%) than in non-elderly adults (11/786; 1.4%). Of the 43 deaths, 40 (93%) occurred in patients with comorbidities. The case fatality of influenza-associated pneumonia was 5.9%.

In the 2015 season, we documented more than 2,000 cases of influenza, which represents a similar number of admissions to those in 2014 (n=2,097). This was the largest number of admissions documented since hospital-based surveillance commenced in 2009. Based on the bed capacity of sentinel hospitals, this is likely to represent around 17,000 admissions with confirmed influenza nationally. However, as influenza testing is not performed on all patients with acute respiratory presentations, and influenza may also trigger non-respiratory complications such as acute myocardial infarction, this should be regarded as a probable underestimate.

Previous studies have also noted a lower clinical severity of illness associated with influenza B, with pneumonitis or pneumonia being uncommonly reported.9,10 In contrast, we found that the proportion of patients requiring intensive care admission was similar for those with influenza B compared with influenza A. A lower proportion of elderly patients were admitted to ICU than non-elderly adults, and this difference was not accounted for by the higher prevalence of medical comorbidities in the elderly. Of all female patients of childbearing age, 16% were pregnant. This was a similar proportion to that observed in previous seasons (20.9% of female patients aged 16–49 years who were pregnant during the 2010–14 seasons), and is likely to reflect the susceptibility of pregnant women to severe influenza.

We found that around half of the influenza cases were unvaccinated. Our estimates of vaccine coverage is similar to that of previous years, where around 70% to 80% of the elderly, around 60% of non-elderly adults with comorbidities and 30% of children with comorbidities were vaccinated.11,12 We estimated that up to 209 admissions, or 14% of the admissions with confirmed influenza in the at-risk population at these 17 hospitals are potentially avoidable by improving influenza vaccination coverage in the target group. Conversely, this suggests that there would have more than 2,800 admissions involving patients at risk of influenza in the absence of vaccination and the proportion of admissions in the target group averted by vaccination was 46%. These figures are higher than estimated for the United States of America population, where influenza vaccination is actively promoted for the whole population, rather than specific risk groups.13

There are several limitations to this surveillance system. There may be under-ascertainment of influenza due to poor quality sample collection or the lack of use of influenza laboratory tests, despite the diagnosis of influenza having implications for infection control and antiviral use in hospitals. Delayed presentations or secondary bacterial pneumonia may be associated with false negative influenza tests as the influenza infection may be cleared by the time of presentation. Ascertainment in tropical regions is limited by sampling in the winter/dry season only. We have previously found that around 5% of influenza cases in hospital were acquired after admission,14 and the incremental benefit of immunising close contacts (healthcare workers and household contacts) has not been considered.

In summary, we detected a large number of hospital admissions with laboratory-confirmed influenza in a national observational study in 2015 comparable with 2014 but much higher than in prior years. A high proportion of patients with severe influenza, and almost all deaths, occurred in patients with chronic comorbidities.