The Victorian Sentinel Practice Influenza Network (VicSPIN) conducts surveillance for syndromic and laboratory confirmed influenza in approximately 100 general practices in Victoria each influenza season. Participating general practitioners test for influenza at their own discretion – the percentage of patients swabbed within and between seasons is evaluated.

The Victorian Sentinel Practice Influenza Network conducts syndromic surveillance for influenza-like illness (ILI), with testing for laboratory confirmation of a proportion of cases at the discretion of general practitioners. The aim of this study was to evaluate the consistency of sentinel general practitioners' swabbing practice within and between influenza seasons. Aggregated, weekly, non-identified data for May to October each year from 2007 to 2014 were used to calculate the proportion of patients presenting with ILI (defined as cough, fever and fatigue), proportion of ILI patients swabbed and proportion of swabs positive for influenza. Data on the proportion of consultations for ILI and the proportion of ILI patients swabbed were aggregated into time-period quintiles for each year. Analysis of variance was used to compare ILI patients swabbed for each aggregated time-period quintile over all 8 years. Spearman's correlation and Bland-Altman analyses were used to measure association and agreement respectively between ILI proportions of consultations and swabs positive for influenza in time period quintiles within each year. Data were aggregated by year for the rest of the analyses. Between 2007 and 2014 there was a slight decrease in the proportion of positive tests and the proportion of ILI patients was generally a good proxy for influenza test positivity. There was consistency in testing within and between seasons, despite an overall testing increase between 2007 and 2014. There was no evidence for temporal sampling bias in these data despite testing not being performed on a systematic basis. This sampling regimen could also be considered in other similar surveillance systems. Commun Dis Intell 2017;41(1):E4–E9.

A range of influenza surveillance methods and settings are used both internationally and within Australia in order to assess the onset, magnitude and duration of influenza seasons.1–3 These include syndromic surveillance of influenza-like illness (ILI) that serves as a proxy for influenza activity. This is simple to operate, relatively cheap as no testing is required (there can be reluctance to test children), can be delivered online, is generally consistent over time and is not subject to biases in testing practices. However, the positive predictive value of ILI for influenza can vary due to the use of different case definitions across systems, differing application of definitions, incidence of influenza and other respiratory viruses during the season and the surveillance setting (e.g. primary health care, hospital outpatients, emergency departments or hospital admissions).4–6 Syndromic surveillance is therefore usually combined with laboratory testing using modern diagnostic techniques such as real-time polymerase chain reaction (PCR)7 enabling more accurate case ascertainment, a better understanding of circulating types, subtypes and strains, and to inform the formulation of vaccines.8

The Victorian Government Department of Health and Human Services funds the Victorian Sentinel Practice Influenza Network (VicSPIN), operated by the Epidemiology Unit at the Victorian Infectious Diseases Reference Laboratory. The Network is comprised of approximately 100 participating general practitioners (GPs), and aims for representation of approximately 1 GP per 200,000 population in metropolitan areas and 1 per 50 to 100,000 in rural areas.9,10 It operates each year between May and October. This system conducts syndromic and laboratory surveillance of ILI and influenza among general practice patients to assess the onset, magnitude and duration of each influenza season, circulating strains and vaccine effectiveness. Each week, GPs are requested to report their total number of consultations and the number that met the ILI case definition.2 Nose and/or throat swabbing of ILI patients within 4 days of symptom onset for PCR testing is done at the discretion of the general practitioner rather than systematically,8 which has the potential to introduce selection bias.11 Whom GPs select to swab and the frequency at which they do it may vary throughout the season due to many factors such as individual GPs' preferences, the patient's vaccination status12 and influenza incidence or perception of it,13 which may in turn be influenced by media reporting.14 Swabbing of ILI patients by VicSPIN GPs over the whole season has ranged from 39% in 200510 to 69% in 2013.12

The aim of this study was to evaluate whether the percentage of patients swabbed by sentinel GPs has changed within and between influenza seasons.

Data were aggregated by year for the rest of the analyses. Rates of ILI consultations, ILI patients swabbed and swabs positive for influenza were analysed using Pearson's chi-square for strength of association and the chi-square test for trend.

Weeks where the number of patients swabbed exceeded the number of ILI patients were excluded. Where time-period quintiles were used, weeks at the beginning (weeks 18 to 21) and end (weeks 42 to 43) of the season were excluded as the small numbers during these periods caused large fluctuations in proportions calculated.

Data in this study were collected, used and reported under the legislative authorisation of the Victorian Public Health and Wellbeing Regulations 2009. Monash University granted the study exemption from ethical review (project number CF15/1277 – 2015000606).

Over the 208 weeks of data collection between 2007 and 2014, sentinel GPs reported 1,384,141 patient consultations. The reported number of patients swabbed exceeded the reported number of ILI consultations in 7 weeks, resulting in the exclusion of 126 (1.7%) swabbed patients and 100 (1.3%) ILI patients. A further 747 ILI patients including 436 swabbed patients were excluded from the beginning and end of seasons for the time period quintile analyses. 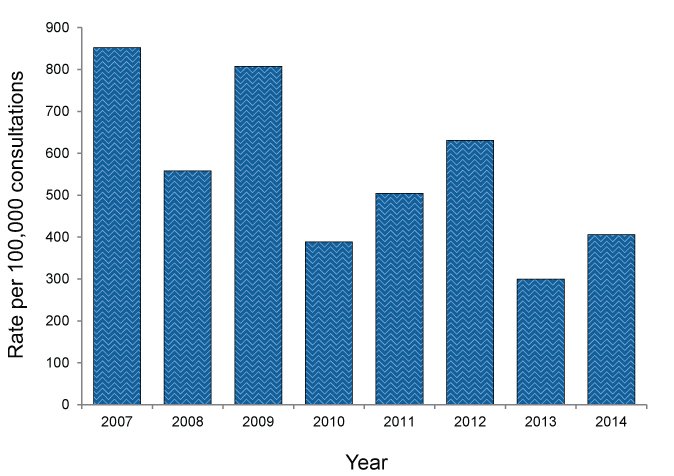 Figure 2: Percentage and number of influenza-like illness patients swabbed, VicSPIN, 2007 to 2014, by year 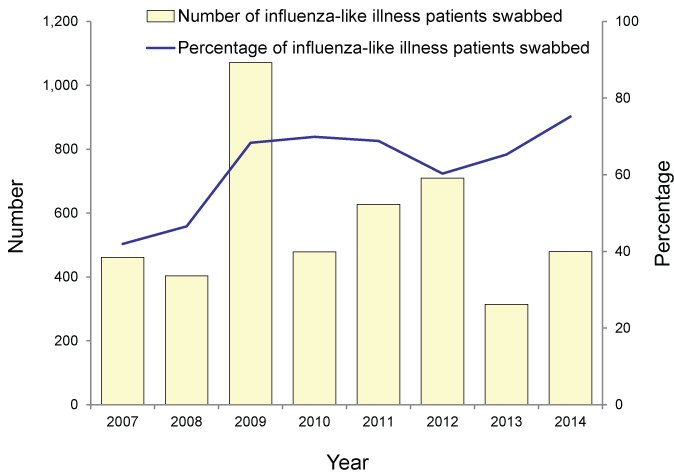 Percentage of swabs positive by year

There were 1,624 swabs positive for influenza over the 8 years of data collection with a median of 182 positive swabs per year or 37% of swabs taken. The minimum percentage positive was 22% in 2013 and the maximum was 47% in 2007. There was a slight, but statistically significant (χ2 = 10.63, df = 1, P < 0.01), non-linear downward trend in the percentage of ILI patients with influenza-positive swabs during the study (Figure 3).

Figure 3: Percentage and number of swabs positive for influenza, VicSPIN, 2007 to 2014, by year 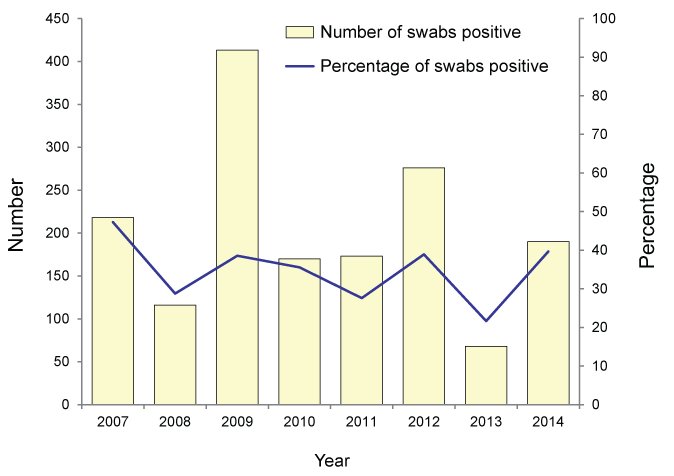 The percentage of ILI patients swabbed for every year, divided into seasonal quintiles, is shown in Figure 4. 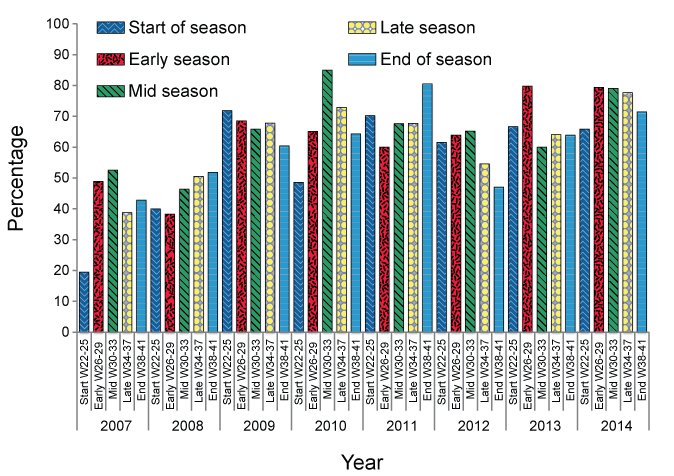 When compared by time period quintiles, the proportion of patients with ILI correlated positively with the proportion of swabs positive for influenza in every year; and was statistically significant in all but 2008 and 2011 (Table 2). All years when the incidence of influenza was assumed to be high, that is, when the percentages of swabs positive for influenza was greater than the median for 2007 to 2014, were statistically significant.

The lack of variation in swabbing practice with time-period quintiles indicates that swabbing practice by VicSPIN GPs was generally consistent within and between influenza seasons from 2007 to 2014, despite the overall increase in testing since 2009. Consequently, although VicSPIN GPs do not systematically sample ILI patients for influenza testing, no temporal sampling bias was apparent.19

There was an increase in testing from 2009 among sentinel GPs, although laboratory testing, without explicit caps, has always been available to them. The pandemic year of 2009 may have simply prompted greater awareness and concern about influenza among sentinel GPs, however there have also been wider changes in attitudes to testing in primary care over that time. PCR testing with its rapid availability of results has become increasingly widely used after introduction of government reimbursement through Medicare in 2005 and funding for purchase of new PCR machines after the 2009 pandemic.1,2,20 PCR testing has increased to the point where it is thought to be responsible for the substantial increase in statutory notifications over the 2010 to 2015 period, since syndromic surveillance has not seen similar increases in seasonal incidence.1,21

The slight downward trend in the proportion of swabs positive between 2007 and 2014 may be partly related to the observed increase in testing over the same period. However, this relationship is likely to be obscured by several factors, including variability in influenza incidence and other causes of ILI, and the age groups affected in a given year, for instance, GPs may be more reluctant to swab children, and nursing home resident surveillance is covered by a different part of the system in Victoria.12,22,23

Theoretically, swabs are more likely to be positive in years with higher incidence of influenza. There was a positive correlation between the percentage of consultations with diagnosis of ILI and percentage of swabs positive in all 8 years of data collection. This was statistically significant in all but 2 years, including those of presumed higher influenza incidence. This confirms that ILI is a reasonable proxy for interpreting the severity of influenza seasons in this dataset.

A limitation of this study is that the small sample size for the time-period quintile analyses may have underpowered the study to detect statistically significant variation in swabbing, as well as correlation and agreement of swabs positive for influenza with consultations for ILI. Furthermore, no conclusions about other sources of sampling bias such as vaccination status, age or other factors can be drawn from this study as they were not examined.

VicSPIN gives timely ILI and laboratory test data from a broadly representative sample of GPs, providing an important part of influenza surveillance in Victoria and Australia as a whole. Between 2007 and 2014 there was a slight decrease in the proportion of positive tests and the proportion of patients with ILI was generally a reasonable proxy for influenza test positivity in these primary care patients, especially in high incidence years. During the study period, GPs in the VicSPIN surveillance program did not vary their ILI testing practices by time period quintiles, despite an overall increase in testing since 2009. This study supports the current VicSPIN practice of testing for influenza at the discretion of the GP and the confidence that can be placed in the surveillance data that are produced. Achieving systematic sampling is likely to require considerable effort and may reduce GP participation with little impact on the value of surveillance. This sampling regime could also be considered in other similar surveillance systems.