This article describes an outbreak investigation that occurred after people ate at a Darwin restaurant in June 2015. A cohort study was undertaken to determine the cause of the outbreak.

In June 2015, an outbreak of salmonellosis occurred among people who had eaten at a restaurant in Darwin, Northern Territory over 2 consecutive nights. We conducted a retrospective cohort study of diners who ate at the restaurant on 19 and 20 June 2015. Diners were telephoned and a questionnaire recorded symptoms and menu items consumed. An outbreak case was defined as anyone with laboratory confirmed Salmonella Typhimurium PT9 (STm9) or a clinically compatible illness after eating at the restaurant. Environmental health officers inspected the premises and collected food samples. We contacted 79/83 of the cohort (response rate 95%); 21 were cases (attack rate 27%), and 9 had laboratory confirmed STm9 infection. The most commonly reported symptoms were diarrhoea (100%), abdominal pain (95%), fever (95%) and nausea (95%). Fifteen people sought medical attention and 7 presented to hospital. The outbreak was most likely caused by consumption of duck prosciutto, which was consumed by all cases (OR 18.6, CI 3.0–∞, P < 0.01) and was prepared on site. Salmonella was not detected in any food samples but a standard plate count of 2 x 107 colony forming units per gram on samples of duck prosciutto demonstrated bacterial contamination. The restaurant used inappropriate methodology for curing the duck prosciutto. Restaurants should consider purchasing pre-made cured meats, or if preparing them on site, ensure that they adhere to safe methods of production. Commun Dis Intell 2017;41(1):E16–E20.

In 2011, 33% of the foodborne and suspected foodborne outbreaks investigated by OzFoodNet, Australia's foodborne disease surveillance network, were associated with restaurants and caterers.1Salmonella Typhimurium was the aetiological agent in 37% of all foodborne and suspected foodborne outbreaks.1 It is important to investigate all S. Typhimurium outbreaks in order to identify implicated foods, undertake appropriate public health action and ensure food safety. This information is vital for food safety authorities to protect the public by formulating policy and practice that minimises risk of foodborne illness.

On 26 June 2015, the Northern Territory Centre for Disease Control was notified of 2 salmonellosis cases via routine laboratory surveillance. Administration of salmonellosis hypothesis generating questionnaires revealed that both cases had eaten at the same restaurant on 19 and 20 June 2015 respectively. Initial enquiries identified further patrons had also become ill on these nights. An outbreak investigation was launched to identify the cause of illness and implement appropriate public health measures to prevent further cases.

We performed a retrospective cohort study via telephone using a structured questionnaire developed from the restaurant's menu. Patrons were contacted using the restaurant's electronic booking system, which contained a name and phone number for each table as well as an itemised bill. When further diners were identified, the patron who made the booking was asked to provide names and contact details of the other diners. Kitchen staff who worked on the implicated dates had also eaten food from the kitchen and so were included in the cohort. Ethics approval was not sought as the investigation was conducted under the auspices of public health legislation.2

A probable case was defined as anyone who ate dinner at the restaurant on 19 or 20 June 2015 and then developed a clinically compatible illness (diarrhoea) within 92 hours of consuming food at the restaurant. A confirmed case was defined as anyone who ate dinner at the restaurant on 19 or 20 June 2015 with a laboratory confirmed Salmonella infection, later refined to Salmonella Typhimurium PT9 (STm 9) infection when phage typing became available. The cohort study included confirmed and probable cases as outbreak cases. As the same menu was served on both 19 and 20 June, diners from both nights were analysed as a single cohort. Data were collected and entered into Microsoft Excel 2010 (Microsoft, USA) and analysed using StataIC® 13 (StataCorp, USA). Binary and categorical outcomes were reported as numbers and proportions, and compared using the chi square test, or Fisher's exact test when cell counts were less than 5. Age was the only non-categorical variable reported. This was non-normally distributed and so medians were compared using the Wilcoxon rank sum test. To determine the risk of becoming unwell in exposed and unexposed groups, we calculated relative risks (RR). When a RR was infinite, exact logistic regression was used to calculate an odds ratio (OR) and 95% confidence intervals (CI). All results were considered significant at the 5% level.

Stool samples were submitted and were either tested by polymerase chain reaction or by traditional culture. When Salmonella was cultured, isolates were sent to SA Pathology or the Microbiological Diagnostic Unit at the University of Melbourne for subtyping and phage typing.

We contacted 95% (76/80) of the diners who attended the restaurant over the designated dates as well as 3 staff (response rate 95%, 79/83). Four diners were uncontactable. Of the 79 people we interviewed, 21 met the case definition (9 confirmed and 12 probable), representing an attack rate of 27%. Fifteen people sought medical attention and 7 presented to hospital. Two other diners became ill over a week after eating at the restaurant from presumed secondary transmission after caring for sick family members in the home.

Figure: Epidemiological curve of outbreak cases by onset day after eating at a Darwin restaurant (n=21) 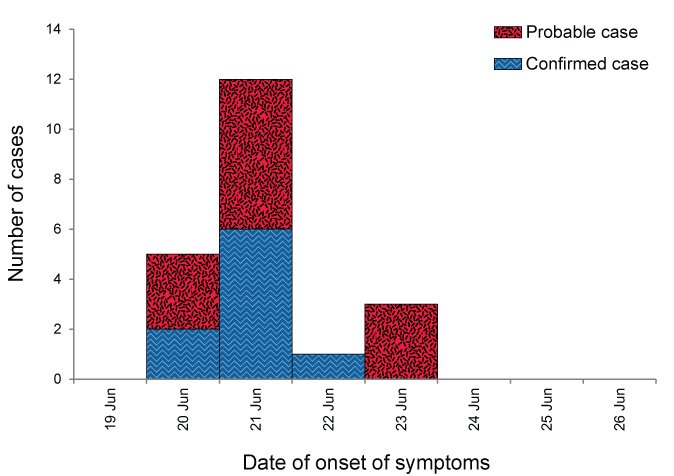 Attack rates for various exposures are shown in Table 2. On both nights the restaurant served a degustation menu and an a la carte menu. All cases ate from the degustation menu and this was significantly associated with illness (OR 11.8, 95% CI 1.8–∞, P < 0.01). The degustation menu consisted of 5 courses; duck prosciutto, papardelle, snapper, lamb ratatouille and a dessert of either crème brulee or a chocolate brownie. Duck prosciutto was found to be significantly associated with illness (OR 18.6, 95% CI 3.0–∞, P < 0.01). Duck prosciutto was consumed by every person who became ill and as a result, multivariate analysis was unable to be performed.

The initial environmental health inspection of the premises observed that all cool room and refrigerator temperatures in the kitchen were satisfactory and that the structural condition and equipment in food production areas were suitable for the processing of safe food. The kitchen did not produce any foods containing raw or semi-cooked egg products.

A second environmental health inspection focused on the preparation of the degustation menu and in particular the preparation of the duck prosciutto from duck fillets, which was done on site. Duck fillets were cured in salt and brown sugar for a period of 2 days at room temperature in the kitchen and then dried for 24 hours in what was reported by restaurant staff to be a 'cool' dry area, again at room temperature. This area was deemed by EHOs to be unsatisfactory as it was neither cool nor dry and presented a risk of external contamination due to its location in a busy corridor separate from the kitchen. The duck prosciutto was then cryovacced and re-frozen. The environmental health investigation also determined that the cleaning and sanitising of the cryovac machine was not sufficient. The duck prosciutto would then be removed from the freezer to be cut and served as required. Duck prosciutto was removed from the menu as a result of the second inspection on 30 June 2015 and the restaurant was prohibited from preparing any prosciutto on site. Formal legal notices were issued to the restaurant for breaches of the Northern Territory Food Act,3 requiring improved food handling skills and implementation of food safety systems including improved cleaning and sanitising practices.

All 9 stool samples collected from people who were ill tested positive for STm9.

Non-typhoidal Salmonella bacteria are carried in the intestines of wild and domestic animals including ducks and other poultry. Humans become infected through eating contaminated meat or eggs from those animals or from coming in contact with an environment that has been contaminated by those animals.5 In Australia, S. Typhimurium PT9 has been previously detected in samples of duck eggs as well as duck carcasses and offal.6 An efficient kill-step such as cooking or curing prevents these bacteria infecting humans. Generally, the process of curing meats should involve meat with a pH > 6 undergoing a dry salting process followed by drying at low temperatures (10°C to 15°C) and low relative humidity (70% to 85%). The salt level and low temperature control growth in the early stage of the process and then the drying at low temperature and relative humidity should inactivate some pathogens and inhibit growth of others.7

A large number of bacteria were detected in the samples of duck prosciutto but not in the frozen duck fillets from which it was prepared. This is strong evidence that contamination occurred during the drying and curing process. Given that poultry is a known high-risk food for Salmonella infection, we believe that it is likely that small amounts of bacteria in the frozen duck fillets that were below detectable limits, could have multiplied during the curing and drying process. However, we cannot discount the possibility that bacteria were introduced to the duck meat during the curing and drying process by improper and unhygienic handling, applying a curing solution that potentially promoted microbial growth, or undertaking the drying and curing process in an area that allowed for potential contamination to occur. The environmental health investigation observed that the curing and drying of the duck fillets occurred at non-air-conditioned room temperature (Darwin median maximum June temperature 30.6°C)8 and not at the recommended 10°C to 15°C.7 The site where the curing and drying of the duck prosciutto occurred was not a low humidity environment and occurred in an area with high volumes of human traffic, which could have contributed to external contamination of the meat.

The risk of salmonellosis from poultry, particularly chicken, is recognised at the primary production level.9 Food Standards Australia New Zealand assume the hazards of concern in all poultry species are largely the same as those for chicken.10 Poultry has a higher Salmonella risk rating than red meat7 and as a result, food handlers need to possess good food knowledge and follow well documented food safety procedures. Restaurants should evaluate the risk of preparing their high risk raw foods on site as opposed to purchasing from producers who have expertise in the field. This outbreak investigation highlights the risk that occurs when raw high-risk foods are prepared by staff who lack familiarity with the scientific processes that underpin preparation methods, are inadequately trained and operate without food safety systems.

We minimised measurement bias by using a standard questionnaire based on the menu at the restaurant with prompts for all food items, including individual food items on each plate. The restaurant is considered a prestigious venue and more likely to be only frequented by diners on special occasions and this probably improved participant recall. Selection bias was minimised through having access to a full booking list from the restaurant and the study's high response rate. We were able to contact almost the entire cohort of persons who ate at the restaurant over the 2 evenings.

A major limitation of the investigation is that S. Typhimurium PT9 was not detected in food samples collected from the restaurant. Only 2 samples of duck prosciutto and frozen duck fillets were collected for sampling. The distribution of contamination throughout a sample is not uniform and this limited amount of sampling reduced the sensitivity of food testing in this outbreak investigation.

This outbreak of Salmonella Typhimurium PT9 at a Darwin restaurant was most likely caused by consumption of duck prosciutto. The duck prosciutto was likely contaminated during the drying and curing process, which was conducted under conditions that facilitated the introduction, growth and survival of bacteria. This investigation highlights the importance of restaurants establishing and implementing food safety procedures in order to limit the potential for such outbreaks to occur. Scientific principles underpin safe food handling process and it is important not to deviate from safe methods, particularly when preparing high risk foods which are becoming increasingly popular in Australian restaurants and homes.