Melioidosis in the Torres Strait Islands of Far North Queensland

This report published in Communicable Diseases Intelligence Volume 26, No 2, June 2002 contains information on melioidosis in the Torres Strait islands that lie between northern Queensland and Papua New Guinea.

Abstract
During the six-year period from 1995 to 2000, 23 cases of melioidosis were diagnosed from the Torres Strait islands that lie between northern Queensland and Papua New Guinea. This represents an average annual incidence of 42.7 per 100,000 population, the highest documented to date in this region. This probably reflects the extremely high prevalence of diabetes, the high seasonal rainfall in the area, and the lifestyle of Torres Strait Islanders. The majority of patients (20 out of 23) acquired their disease in one of the more remote outer island indigenous communities. Most patients presented with a community-acquired pneumonia or with deep seated abscesses. One patient presented with the first case of suppurative parotitis due to melioidosis recorded in Australia. Diabetes was the overwhelming risk factor, being present in over three-quarters of all cases. Five patients (22%) died. Strategies to try to minimise illness and death due to melioidosis in the Torres Strait are discussed. Commun Dis Intell 2002;26:279-283.

Melioidosis is a well-recognised infection caused by the bacteria Burkholderia pseudomallei, which is a free-living organism present in the soil, especially mud, and surface water. The disease is endemic in northern Australia and South-East Asia,1 where it is a significant cause of morbidity and mortality. Most infection is asymptomatic and disease usually occurs in people with risk factors. Latent infection and relapse are not uncommon. This study reports on 23 cases of melioidosis that presented in the Torres Strait between 1995 and 2000.

The Torres Strait, which separates Cape York peninsula from mainland Papua New Guinea (PNG), has a population of about 9,000 mainly Indigenous inhabitants. About half of these people live on or close to Thursday Island which is the main commercial and government centre. The island has a 38 bed general hospital. The rest of the population live in communities on 15 inhabited outer islands that stretch up to the northernmost Australian border. This runs very close to the PNG mainland. A health centre is located on each of these islands and is staffed by remote area nurses and/or indigenous health workers. These clinics are also serviced by regular visits by a doctor, but sick patients requiring in-patient care must be evacuated by air to Thursday Island. The closest referral hospital is Cairns Base Hospital more than 800km away. This area has two distinct seasons with a monsoonal wet season from December to May each year. The main health problem in the Torres Strait is type 2 diabetes mellitus and its associated complications.

We retrospectively (using systematic hospital record review) and prospectively (from 1999) analysed patients from the Torres Strait who presented with culture-proven melioidosis in the 6 years from January 1995 to December 2000. In all patients B. pseudomallei was isolated from clinical microbiological specimens. All patients were admitted to the Thursday Island hospital for initial management, however, most were transferred to Cairns Base Hospital or Townsville General Hospital for further investigation or treatment. One case, a child from PNG was excluded from the analysis which only looked at patients who resided in the Torres Strait. Cases with presumed cure of previous melioidosis that subsequently recurred (i.e. were reinfected) were considered new episodes. However, patients with a relapse of melioidosis (i.e. recrudescence or treatment failures) were only included once in the series. This study was approved by the Torres Strait and Northern Peninsula Area Health Services District.

Melioidosis was confirmed in 23 cases during the study period. This represented an average annual incidence of 42.7 cases per 100,000 population in Torres Strait Islanders. The median age was 43 years and sex distribution was equal. All cases were in Indigenous Torres Strait Islanders. Eighteen of the 23 cases occurred during the wet season months from December to May, confirming the seasonal nature of the disease (Table). There was some clustering of cases particularly during the 1998-1999 wet season (8 cases), however, new cases were diagnosed during six of the seven wet seasons included in the survey.

Top of page
Diabetes was by far the most common risk factor, being present in 18 cases (78%) (Table). Four of these patients had previously been diagnosed with melioidosis and 4 patients (17%) had no recognisable risk factors for melioidosis. Pneumonia was the most common form of presentation (7 cases) followed by internal organ abscesses (5 cases, including 3 liver abscesses). Five patients died, representing a 22 per cent mortality. Four of these patients were clinically septicaemic at presentation. One death was in an 8-year-old boy with no risk factors for melioidosis.

The geographical distribution of cases is shown in Figure 1. Of note is that only 3 cases occurred on or close to Thursday Island where approximately half the population lives. Most patients presented from the outer island Indigenous communities with 7 cases recorded from St Pauls community on Moa Island.

Melioidosis is endemic in the northern part of Australia.2 It was first described in humans in Australia in north Queensland in 1962.3 The first cases of melioidosis in the Torres Strait were reported in 19674 and 4 cases from Thursday Island were included in a clinical and epidemiological review of 20 patients investigated at the Cairns Base Hospital in 1984.5 The seroprevalence for melioidosis in the Torres Strait islands has been documented at 7.8 per cent.2

It has been suggested that the incidence of melioidosis is highest in the north of the Northern Territory, with two hyperendemic areas for melioidosis being the 'Top End' of the Northern Territory and Ubon Ratchatani province in north-east Thailand.6 The average annual incidence of melioidosis in the Torres Strait islands during the period of our study was 42.7 per 100,000 population. This compares with an annual incidence of 16.5 per 100,000 population in the Top End6 and 4.4 per 100,000 population in Ubon Ratchatani.7 Several factors may explain the remarkably high incidence of melioidosis in the Torres Strait. Diabetes is well recognised as the most important risk factor for melioidosis5,7,8,9,10 and the prevalence of type 2 diabetes in adults is about 24 per cent in the Torres Strait island population, the highest rate in Australia and also one of the highest rates internationally.11,12 Over three-quarters (78%) of cases of melioidosis in our series were in diabetic patients, which is much higher than in most other series (37% in Currie, 2000;10 21% in Suputtamongkol, 1994;7 32% in Chaowagul, 1989;8 30% in Guard, 1984;5 24% in Rode and Webling,198113 ) except for Suputtamongkol,19999,where 61 per cent of melioidosis cases were in diabetics. The Torres Strait also has a very high rainfall concentrated during the summer wet season. This area has an average annual rainfall of 2,041mm compared with 1,713mm in Darwin (Bureau of Meteorology data) and it has been shown that there is a strong association between the incidence of melioidosis and average rainfall in some endemic areas.7,14 Finally, Torres Strait islanders have a basic and outdoor lifestyle, especially those living on the outer islands where often footwear is not worn. This is conducive to the acquisition of melioidosis which is most likely transmitted from percutaneous inoculation or exposure to wet soil and surface water.6 Indeed, it has been demonstrated that there is a synergistic interaction between diabetes and the extent of exposure to wet soil as risk factors for melioidosis.9

It has been recognised that discrete foci of melioidosis infection has occurred.2 A cluster of cases was recorded in St Pauls village, one of the 2 communities on Moa Island. Seven cases (30%) occurred over a 4 year period in a population of only 237 people, which represents 3 per cent of the total population in the Torres Strait. These included 3 patients presenting over a 7 week period during the 1998-1999 wet season. Previous outbreaks of melioidosis that may have been related to contamination of the community water supply have been recognised.15 The clustering of cases on St Pauls was not recognised at the time and no further investigation was undertaken. However, since February 1999 there have been no more cases reported from this community.

As with most other recent series in Australia,5,10,13 pneumonia was the most common form of presentation. Our series included a 17-year-old boy who presented with a parotid abscess requiring surgical drainage. Although suppurative parotitis has been noted as a characteristic form of melioidosis in north-east Thailand16 where it accounts for about 6 per cent of cases in adults and up to 38 per cent of melioidosis in children, it has previously never been reported in Australia.6,10

An 8-year-old-girl who crossed the border from PNG was admitted to the Thursday Island Hospital with fulminant septicaemic melioidosis and died shortly after admission. The Torres Strait shares an international border with the Western Province of Papua New Guinea and over recent years 12 culture-confirmed cases of melioidosis have been isolated from a small community in the Fly region of the Western Province. The average age of these cases was 7 years (Dr J Warner, James Cook University, Townsville, personal communication, August 2000). It is interesting that the only case of melioidosis diagnosed in a Papua New Guinea national in the Torres Strait was also in a child.

This study has identified melioidosis as an important cause of illness and death in the Torres Strait. Strategies to try and decrease morbidity and mortality must stress the importance of early diagnosis and treatment.17 A high index of suspicion for melioidosis should be maintained in any undiagnosed infective illness especially in a diabetic during the wet season, and appropriate antibiotic and supportive treatment must be started early. Prevention of melioidosis is based on reducing exposure to the organism in the soil. This basically involves public education, especially of diabetics. After the 1999 wet season when an increased number of melioidosis cases occurred in Far North Queensland, a public education program and associated health promotion pamphlet and poster aimed at informing indigenous communities about melioidosis and its prevention (Figure 2) was initiated by the Tropical Public Health Unit in Cairns. Topics emphasised included avoiding contact with soils or muddy water especially in the wet season; wearing protective footwear and gloves especially whilst gardening; covering open wounds; and general diabetes and foot care.
Figure 2. Public education poster for melioidosis prevention (courtesy of the Tropical Public Health Unit, Cairns, Queensland) 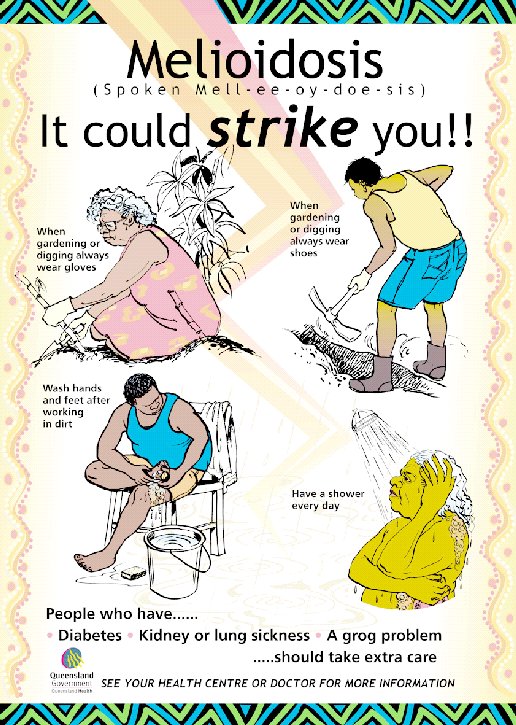 We acknowledge all the medical, nursing and health worker staff who have helped in the management of patients, including Blair Koppen. Thank you to John McBride and Clive Hadfield for managing patients in Cairns Base Hospital and providing clinical advice. We thank Robyn McDermott, Ann Richards, Di Brooks, Dianne James and Jeff Hanna at the Tropical Public Health Unit in Cairns for their help and for permission to reproduce the melioidosis poster, and to Ashim Sinha and Sid Selvanayagam for comments on the manuscript. We also acknowledge the Torres Strait and Northern Peninsula Area Health Council and the people of the Torres Strait.


This article was published in Communicable Diseases Intelligence Volume 26, No 2, June 2002