Prevention of perinatal hepatitis B virus transmission: are we following guidelines?

This article describes the results of an audit investigating the hepatitis B vaccination completion outcomes and serological testing of infants in the Northern Territory who were born to mothers with hepatitis B infection. The results demonstrate that although adherence to the vaccination schedule in this group of infants was good, mechanisms for ensuring that infants receive serology testing need to be strengthened.

It is recommended that infants born to women with hepatitis B infection should have serological review following completion of a four dose vaccination schedule. A review was undertaken on 102 neonates who received hepatitis B immunoglobulin to ascertain the proportion that were fully immunised and then followed up. Of the 66 infants for whom data were available, 65 (98.5%) had appropriately received four doses of hepatitis B vaccine in infancy and a further child had received three doses. Only 19/66 (29%; 95%CI: 18-41%) infants had documented follow-up serology results, one of whom was infected and one of whom was immune through clearance of infection. All children who had no serology documented were traced and offered testing in primary care. Our results demonstrate that although adherence to the vaccination schedule in this group of infants was good, mechanisms for ensuring that infants receive serology testing need to be strengthened.

Chronic hepatitis B virus (HBV) infection affects over 230 000 Australians, disproportionately affecting Aboriginal and Torres Strait Islander populations.1 It is associated with adverse health outcomes including progressive liver disease, cirrhosis, and hepatocellular carcinoma. Globally, vertical transmission of HBV is the predominant mode of spread in high prevalence areas and strategies to decrease transmission include administration of hepatitis B immunoglobulin (HBIg) at birth, infant vaccination and the recent introduction of antenatal anti-virals for highly viraemic mothers.2 In Australia, infants born to HBV-infected mothers are recommended to have testing three months after completion of a four dose vaccination schedule (birth, 2, 4 and 6 months of age) to demonstrate immunity and exclude infection.3,4 We performed an audit to evaluate vaccination and follow-up serology in infants born to HBV-infected mothers in the Northern Territory (NT).

Following registration with the NT Department of Health and Menzies School of Health Research Quality Assurance Audit Register, we extracted details of all neonates who had received HBIg within eight days of birth between December 2008 and December 2011, from the NT Immunisation Register. HBV serology results for the mothers of these infants was checked by interrogating laboratory records, the NT Notifiable Diseases System and other departmental electronic health records. HBV immunisation records and serology for infants of confirmed HBsAg-positive mothers were retrieved. Infants who had not been followed up and who were still living in the NT were traced, and offered testing after discussion with their primary care physicians, but the results of these tests were not recorded as part of the audit

Of 102 infants identified as having received HBIg, 36 were excluded from further analysis (Figure 1) including 27 whose mothers were subsequently found to be HBsAg negative. Of the 66 remaining infants, 46 (69.7%) were Aboriginal.

The recommended four-dose childhood HBV vaccination schedule3 was completed by 65 of the 66 (98.5%) infants included in analysis (Figure 1). The remaining child received three vaccines only.

Of the 15 infants who were tested at least 3 months after the fourth vaccination, one was infected with HBV and one was immune through previous infection (HBsAg negative, anti-HBc positive, anti-HBs >10 mIU/mL). Nine infants were immune through vaccination and a further infant was immune (HBsAg negative, anti-HBs >10 mIU/ml), but anti-HBc had not been performed and so it was unclear whether immunity resulted from vaccination or infection. Three infants were uninfected, but had anti-HBs levels of <10 mIU/mL. One of these infants had received a total of six vaccines and was thought to be a non-responder to vaccination, with undetectable anti-HBs. The second infant, tested 39 months after the fourth vaccine, received an extra dose of vaccine with a resultant anti-HBs level of 109 mIU/mL. The third infant was tested 30 months after the fourth vaccine, then received an extra dose but follow-up serology has not yet been completed. Follow up serology was performed more often in the Aboriginal infants but not significantly so (15/46 (30.4%) compared with 4/20 (20%); x2=1.08;p=0.30). 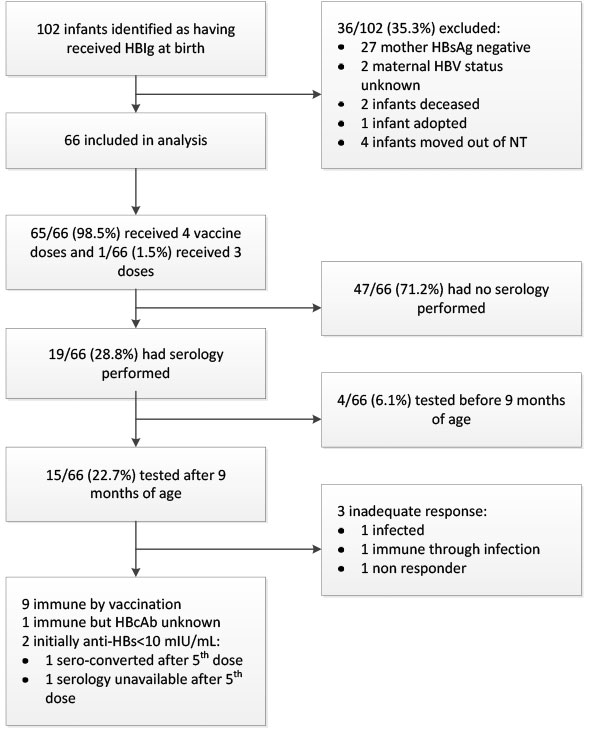 HBV infection among young women in Australia is declining thanks to universal immunisation introduced in the 1990s5,6 but in the NT, HBV is over-represented among the Indigenous population, especially those living in rural communities.6 Our results demonstrate that increased commitment is still required from health services, to ensure that infants born to infected mothers are fully vaccinated and tested at the appropriate age. Documented vaccination and serology testing rates in this group vary widely across the world7-9 and challenges including poor understanding of English, reduced health literacy, high rates of mobility and reduced health service accessibility may apply equally to Australian Indigenous communities as well as to other ethnic communities with high HBV prevalence.

There were three cases of concern, all Indigenous, in whom the immune response was inadequate; comprising two infants who contracted infection, and one who was a vaccine non-responder. The effectiveness of hepatitis B vaccination in the Indigenous population is the subject of ongoing research in the NT.

Novel initiatives such as dried blood spot testing may make testing of young children easier due to their ease of utilisation and avoidance of the need for peripheral venous sampling.10 Chronic disease care plans and recall systems such as those implemented through the Northern Territory Immunisation Register, and sent monthly to primary care services, can be utilised to ensure that follow-up is arranged in a timely fashion. Outside of the NT, follow-up plans will need to be adapted to integrate with local early childhood services. Whichever strategies are employed, it is imperative that families are given all possible opportunities across primary and secondary care services, to access vaccination and serology testing, irrespective of geographical location. Infant infection is a potentially devastating consequence of inaction.

Albeit beyond our initial objectives, our data also revealed an overuse of HBIg. More than a quarter of our infant cohort received HBIg despite their mother’s most recent serology demonstrating they were not infected with HBV. This highlights the need for ongoing education among healthcare staff regarding serology interpretation and sharing of maternal records across healthcare settings.

A birth dose of HBIg and hepatitis B vaccination of those infants born to mothers with hepatitis B infection has significantly diminished the chance of vertical transmission. However monitoring the effectiveness of this intervention is essential, not only for the health of the infant but also to ensure that the program is achieving the expected results.

The authors are grateful to Richard Browning, medical student from the University of Queensland, for assisting with data retrieval.