This report summarises the cases reported to the Australian Paediatric Surveillance Unit (APSU) of rare infectious diseases or rare complications of more common infectious diseases in children. During the calendar year 2016, there were approximately 1500 paediatricians reporting to the APSU and the monthly report card return rate was 90%. APSU continued to provide unique national data on the perinatal exposure to HIV, congenital rubella, congenital cytomegalovirus, neonatal and infant herpes simplex virus, and congenital and neonatal varicella. APSU contributed 10 unique cases of Acute Flaccid Paralysis (a surrogate for polio) – these data are combined with cases ascertained through other surveillance systems including the Paediatric Active Disease Surveillance (PAEDS) to meet the World Health Organisation surveillance target. There was a decline in the number of cases of juvenile onset Recurrent Respiratory Papillomatosis which is likely to be associated with the introduction of the National HPV Vaccination Program. The number of cases of severe complications of influenza was significantly less in 2016 (N=32) than in 2015 (N=84) and for the first time in the last nine years no deaths due to severe influenza were reported to the APSU. In June 2016 surveillance for microcephaly commenced to assist with the detection of potential cases of congenital Zika virus infection and during that time there were 21 confirmed cases – none had a relevant history to suspect congenital Zika virus infection, however, these cases are being followed up to determine the cause of microcephaly.

Each month approximately 1500 paediatricians and other child health clinicians nationally are sent the APSU report card (Figure 1). The majority of clinicians (>90%) report via email, responding each month whether or not they have seen cases of any of the conditions listed on the report card (Figure 2).1 APSU study protocols and case definitions are developed with collaborating study investigators who provide clinical expertise for each condition listed. All study protocols and case report forms are available for download on the APSU website (www.apsu.org.au). 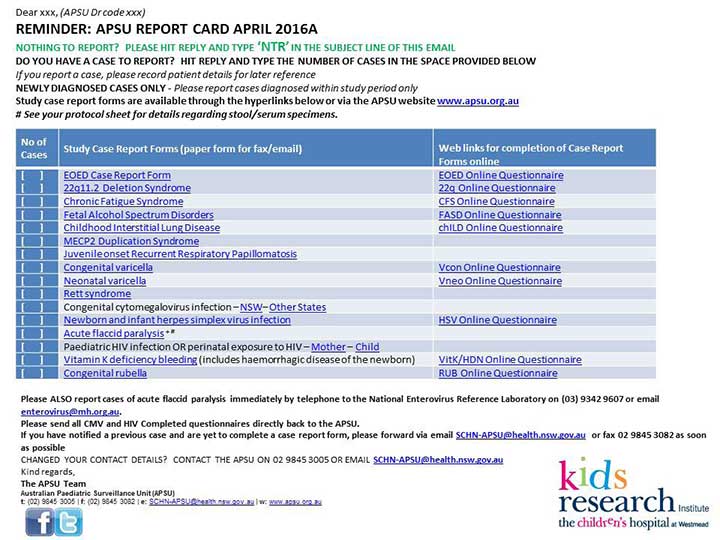 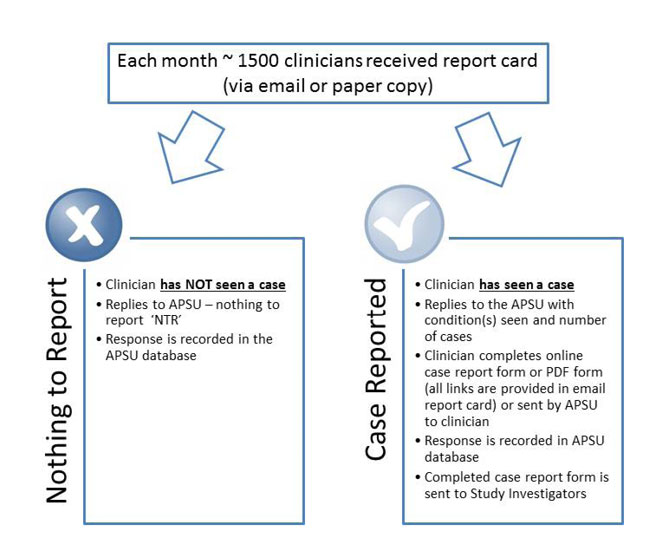 For surveillance of AFP, the APSU collaborates with the Paediatric Active Enhanced Disease Surveillance (PAEDS) system. PAEDS is a hospital-based surveillance system reliant on active case ascertainment by specialist surveillance nurses and operates in five tertiary hospitals around Australia.2 Data collected from the APSU is provided in this report. For data on AFP collected through PAEDS please refer to the PAEDS Annual Reports via the Communicable Diseases Intelligence website.3

In 2016, the response rate to the APSU monthly report card was 90%, and completed questionnaires containing detailed clinical data were received for 81% to 100% of notifications (Table 1). The numbers of confirmed cases and the relevant reported rate estimates for 2016 as well as for the whole study period for each condition, are presented in Table 1. These estimates are accurate at the time of publication, however, should any additional cases be reported later, the estimates will be adjusted accordingly.

* Includes all cases of acute flaccid paralysis (AFP) reported via the APSU. All cases have been classified by the Polio Expert Panel (PEP) as ‘non-polio AFP’ according to World Health Organization criteria. The number of confirmed cases for the total study period includes both the APSU and PAEDs data.
† Based on population of children aged < 15 years.
§ Based on number of births.
II Based on population of children aged < 16 years.
¶ Based on population < 12 months.
** Includes both confirmed (visualisation via endoscopy and histology report) and probable cases (visualisation via endoscopy but no histology report).
†† Influenza surveillance was conducted each year since 2008 during the influenza season, July to September except in the pandemic year (2009) when surveillance occurred from June to October.

All reported rates are based on child population estimates published by the Australian Bureau of Statistics.4

Paediatricians are instructed to report all cases of AFP immediately as they are identified to the APSU and the National Polio Reference Laboratory. Data from the APSU are submitted regularly to the Polio Expert Panel (PEP). In 2016, there were 10 confirmed cases of AFP notified to the APSU. Of the 10 confirmed cases, 4 were reported from New South Wales, 4 from Victoria and 2 from Tasmania. All cases were reviewed by the PEP, and classified as non-polio AFP. The main diagnoses associated with AFP were transverse myelitis (30%) and Guillain-Barre syndrome (20%). Other diagnoses included acute disseminated encephalomyelitis, conversion disorder, encephalomyelitis, anterior horn cell disease and neuromyelitis spectrum disorder. APSU contributes to the national AFP surveillance efforts to reach the World Health Organisation surveillance target of 1/100,000 children aged <15 years per annum.5

There were no notifications of congenital rubella reported to the APSU during 2016. During the entire study period (1993 – 2016) there have been 59 cases of congenital rubella (54 confirmed and 5 probable) reported to the APSU. It is important to continue surveillance and vaccination as imported and locally acquired cases, especially among immigrant unvaccinated women, still occur.6

The majority of mothers of these children were receiving antiretroviral therapy (n=38, 92%). Women most frequently gave birth by vaginal delivery (n=21, 51%) or by elective caesarean section (n=7, 17%) and emergency caesarean (n=4, 9%).

Of 19 notifications, there were 7 confirmed cases of neonatal or infant HSV reported to the APSU in 2016. There were 6 neonatal cases (aged <1 month) and 1 was an infant onset case (aged between 1 month and 1 year). The 1 case of infant onset was reported from New South Wales, with HSV-1 and skin, eye, mouth (SEM) disease.

Of the 6 neonatal cases, 4 cases were reported from Queensland, 1 from New South Wales and 1 from Victoria. One had SEM disease, 1 had HSV CNS disease alone and 4 had disseminated disease (all 4 involving CNS symptoms). Five neonatal cases had HSV-1; 1 had HSV-2. There was 1 death in 2016 of a newborn infant with disseminated HSV disease.

There was a decrease in the number of notifications of children admitted to hospital with serious complications of influenza reported to the APSU in 2016 (n=32) compared to 2015 (n=84). In 2015 the majority of cases were due to influenza B while influenza A was the most common strain detected in 2016. Of the 32 case reports, 3 were duplicates and 1 was an error. Of the 28 confirmed cases, 14 were from New South Wales, 8 from Queensland, 4 from Victoria, 1 from Western Australia and 1 from South Australia. Half of the children identified as Caucasian (54%), 1 child identified as Aboriginal or Torres Strait Islander.

In 2016, 17 (61%) children required an ICU admission and no deaths were reported. Of the 28 children, 12 were previously healthy, while 16 had chronic pre-disposing conditions including asthma, chronic lung disease, neuromuscular conditions and congenital heart disease.

Only 1 of the 28 children was vaccinated for influenza within the last 12 months. Of the children with a chronic pre-disposing condition, who are recommended and eligible for a free vaccine under the National Immunisation Program, only 1 child was vaccinated. An increased awareness among parents and clinicians of the importance of influenza vaccination in this high risk group is required.

Microcephaly surveillance commenced in June 2016. APSU clinicians were asked to report any child < 12 months of age with microcephaly when the occipito-frontal head circumference (OFC) is more than two standard deviations (<3rd percentile) below the mean for age and gender according to standard growth charts, with adjustment for gestational age. There were 37 notifications from June to December 2016. Of the 37 notifications there were 21 confirmed cases (57%), eight outside case definition (22%), 1 administrative error (2%) and 7 (19%) case report forms were not returned. Of the confirmed cases, 14 were from New South Wales, 3 from Victoria, 2 from Queensland, 1 from Western Australia and 1 from the Northern Territory. A third of children (29%) identified as Caucasian, one third identified as Asian (29%) and 1 child identified as Aboriginal or Torres Strait Islander.

In half of the children (n=10) were diagnosed with microcephaly was detected during the neonatal period (<30 days old), in another 10 it was detected later (>31 days old) and 1 child was diagnosed with microcephaly in-utero. In most cases (67%) the definitive cause of microcephaly was unknown and children were undergoing investigations to determine the cause. Identified causes included single gene defects (20%), congenital cytomegalovirus (5%), severe CNS trauma, ischaemic or haemorrhagic stroke (5%) and severe deprivation including malnutrition, or placental insufficiency (5%). A follow-up of confirmed cases at six months is currently being undertaken to obtain a confirmation of the cause of microcephaly where available. No children were identified as having Zika virus-associated microcephaly.

We conducted a 10-year retrospective medical record audit of microcephaly cases that presented to the Children’s Hospital at Westmead. Using the ICD-10AM code for microcephaly (Q02) we identified 102 potential cases which had Q02 assigned as the primary ICD-10AM code. Of the 102 cases, 78 met case definition criteria, 22 were coded inappropriately as the OFC was not less than the 3rd percentile. Ten (12.8%) had a confirmed congenital infection – nine CMV and one had both CMV and HSV. The microcephaly was attributed to a chromosomal anomaly or a single gene defect in 24(30.7%). This current analysis is limited to the primary ICD-10 code and will be expanded to cases for which the Q02 ICD-10AM code had been assigned as one of the first three codes for each case.

The APSU has been facilitating active surveillance of uncommon rare childhood diseases for twenty-four years. Last year, the Department of Health requested that APSU introduce surveillance for microcephaly. This rare condition is often associated with symptoms of neurological impairment including seizures and may also be associated with developmental delay, intellectual impairment, problems with vision, hearing and feeding. Microcephaly is of current interest due to the proven relationship between maternal Zika virus infections during pregnancy and certain congenital abnormalities including microcephaly.

The APSU continues to lead the way in rare disease epidemiological research and provides valuable data on diagnosis, treatment and outcome for infectious and vaccine preventable conditions in Australian children. The APSU continues to be a vital resource to gather information on new and emerging conditions such as congenital Zika virus infection, through microcephaly surveillance. The data collected through the APSU contribute significantly to the national surveillance effort, providing valuable information for clinicians, policymakers and the community.

We would also like to acknowledge the continued contribution of all Australian paediatricians and other child health professionals who participate in surveillance studies conducted by the APSU. Special thanks go to the APSU staff Amy Phu and Dannielle Handel for the management of the APSU database.

APSU activities are funded by the Australian Government Department of Health, and supported by the Discipline of Child and Adolescent Health, Sydney Medical School, The University of Sydney; Kids Research Institute, Sydney Children’s Hospitals Network (Westmead), and The Royal Australasian College of Physicians.

Yvonne Zurynski is supported in part by a Fellowship from the Sydney Medical School Foundation, the University of Sydney.