An outbreak of Salmonella Muenchen gastroenteritis occurred in a remote coastal Aboriginal community in the Northern Territory (NT) of Australia. There were 22 people sick (attack rate 55%); 7 had laboratory confirmed S. Muenchen infection; 2 required medical evacuation and admission to the intensive care unit (ICU). We conducted a descriptive case series to investigate the outbreak. All cases ate meat from a single green turtle (Chelonia mydas). The animal’s pre-death stress, improper butchering, insufficient cooking and the unsatisfactory storage of meat all likely contributed to the outbreak. Turtle meat should be prepared safely, cooked thoroughly and stored appropriately to avoid Salmonella infection.

An outbreak of Salmonella Muenchen gastroenteritis occurred in a remote coastal Aboriginal community in the Northern Territory (NT) of Australia. There were 22 people sick (attack rate 55%); 7 had laboratory confirmed S.Muenchen infection; 2 required medical evacuation and admission to the intensive care unit (ICU). We conducted a descriptive case series to investigate the outbreak. All cases ate meat from a single green turtle (Chelonia mydas). The animal’s pre-death stress, improper butchering, insufficient cooking and the unsatisfactory storage of meat all likely contributed to the outbreak. Turtle meat requires safe preparation which includes thorough cooking and appropriate storage to avoid Salmonella infection.

On Monday 19 June 2017, the Northern Territory (NT) Centre for Disease Control (CDC) was alerted to a group of people who presented to a remote health centre in the previous 24 hours with gastrointestinal symptoms. All reported eating turtle meat. We conducted a descriptive case series to investigate the outbreak and to determine factors that led to the outbreak occurring.

We used information recorded by the treating clinicians, regional Aboriginal land and sea rangers, and from two of the persons who caught, prepared and ate the turtle to formulate the case series. Data were analysed using Microsoft Excel 2010. Ethics approval was not sought for this investigation as it was conducted under the auspices of public health legislation.1

An outbreak case was defined as anyone from a specified coastal NT community with laboratory confirmed Salmonella Muenchen or a clinically compatible illness (diarrhoea and fever) with onset after 17 June 2017. There were 22 cases in total and 7 had laboratory confirmed S.Muenchen infection (Figure 1). All 22 cases reported symptoms of diarrhoea, abdominal pain, fever and vomiting. All cases sought medical attention at the local clinic and 2 were evacuated to Darwin where they were admitted to the intensive care unit (ICU) with sepsis. 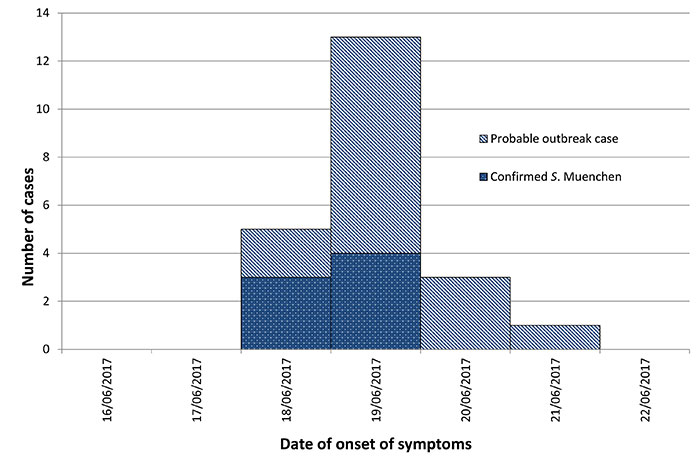 Text version of the Figure (Other 1 KB)

The median incubation period was 15.5 hours (range 12-68 hours) after consuming meat from a single green turtle (Chelonia mydas). The median age of cases was 29 years (range 3-63 years), 12/22 (55%) were female and everyone fully recovered.

A large green turtle (Figure 2) was caught on a beach while laying eggs, at approximately 4:00pm on 16 June 2017. The turtle was transported live on the back of a vehicle for approximately 4 hours and then rested upside-down on its shell. It was killed at approximately 4:00pm on 17 June 2017 and at approximately 8:00pm the turtle was cooked upside down on open fire for 1 hour, with the carapace acting as a natural cooking vessel. It was reported that the fat and liver in the animal were black rather than the typical green colour prior to cooking. Hot stones were placed inside the carapace to aid with cooking. The meat and organs inside the animal were eaten when half cooked and resembled a stew of meat, fat and blood. Sixteen people were recorded as being sick from eating this meal. Meat that was not eaten was given to other family members who ‘re-cooked’ the meat the following day by boiling it at their home. There were 6 people sick as a result of this second meal from the turtle. At no point was refrigeration or ice used to preserve the meat. It is estimated that 40 people in total ate the turtle meat over 2 days (attack rate 55%). 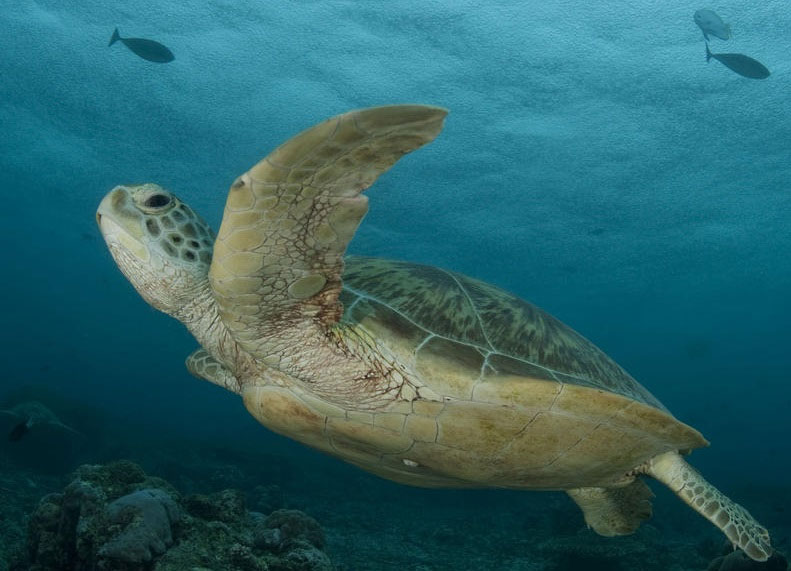 In response to the outbreak, the health clinic at the community issued an alert to community members to take extreme caution when preparing and consuming turtle meat.

Turtles are well known reservoirs of Salmonella spp. and are renowned sources of human infection.3,4,5 Green sea turtles have also been shown to carry Salmonella spp.6 Consumption of turtle meat is popular in Top End Aboriginal communities7 and the rights of Aboriginal people to hunt turtle are protected by legislation.8 In 1998 an outbreak of S. Chester gastroenteritis was reported after consumption of a green turtle in a remote coastal Aboriginal community of the NT.9

Our outbreak investigation identified a number of factors that likely contributed to the outbreak occurring. Firstly, the turtle was caught on the beach while laying eggs. Studies have shown that turtles can progress from being healthy latent carriers of Salmonella to hyper-excretors or even bacteraemic during periods of stress.10 The initial stress of oviposition followed by capture, transport and death 24 hours later likely increased excretion of Salmonella spp. The discolouration of internal organs may be evidence of illness in the animal.

Secondly, the preparation and cooking method of the turtle were likely factors contributing to this outbreak. Preparation generally involves removing the head and intestines, placing hot stones or coals into the cavity and then cooking on a fire until the tissue inside the carapace resembles a stew.11,12 Incomplete ‘gutting’ combined with insufficient cooking time would permit Salmonella spp. to survive within the turtle’s carapace. Thirdly, lack of refrigeration would assist Salmonella spp. to continue to contaminate the meat consumed by those who ate a day after the initial meal.

There are several limitations to our outbreak investigation. Firstly, it is often difficult to investigate outbreaks of disease in remote communities due to public health staff being unable to attend the outbreak site because of the associated cost and distance. There was also a lack of telephone reception which restricted the ability to contact people as well as the inherent difficulty in trying to contact what is typically a highly mobile population. Our estimate that 40 people ate the turtle as well as the details surrounding its capture, preparation and consumption, was provided by the only two cases we could contact by telephone. As a result there is uncertainty that the cohort who consumed the turtle meat was indeed 40 persons. Our outbreak case definition was limited to only those who sought medical attention which means that less serious cases and non-symptomatic cases were not included in the outbreak case definition.

Raw turtle meat should be regarded by the public in the same light as raw chicken meat which can be assumed to be contaminated with Salmonella until cooked.13 It should be handled safely and cooked thoroughly to ensure that Salmonella spp. and other bacteria are killed prior to consumption. The potential for outbreaks to occur is high and it is likely that they are occurring and being under-reported. This outbreak was detected because the seriousness of disease resulted in multiple cases seeking medical attention.

Targeted health promotion messages should be directed towards Australian Aboriginal communities to highlight the increased risks of food poisoning from eating undercooked turtle meat and provide the measures that can be taken to mitigate these risks.