Severe respiratory infections make up a large proportion of Australian paediatric intensive care unit (ICU) admissions each year. Identification of the causative pathogen is important and informs clinical management. We investigated the use of polymerase chain reaction (PCR) in the ICU-setting using data collated by the Australian and New Zealand Paediatric Intensive Care (ANZPIC) Registry from five ICUs in Queensland, Australia. We describe diagnostic testing use among pertussis and influenza-related paediatric ICU admissions between 01 January 1997 and 31 December 2013.

We investigated the use of polymerase chain reaction (PCR) in the ICU-setting using data collated by the Australian and New Zealand Paediatric Intensive Care (ANZPIC) Registry from five ICUs in Queensland, Australia. We reviewed diagnostic testing among all pertussis and influenza-related paediatric ICU admissions between 01 January 1997 and 31 December 2013.

PCR has become the preferred diagnostic method to test influenza and pertussis-related ICU admissions, largely replacing other methods. This finding mirrors trends observed across other health care settings, but appears to have occurred earlier among ICU admissions. The move to PCR testing, has allowed more sensitive and rapid diagnosis of severe pertussis and influenza infections among children.

Severe respiratory infections among infants and young children make up approximately one-third of all Australian paediatric intensive care unit (ICU) admissions each year.1, 2 Respiratory infections can be caused by a range of viral and bacterial pathogens, and given that infants and children can manifest a broad array of non-specific symptoms, identifying the aetiology based on clinical presentation alone is difficult.3-5 Identification of the causative pathogen is important, particularly in severe cases, in order to inform clinical and infection control management.5 As such, infants and children that are hospitalised or admitted to ICU are likely to be tested for a broad range of respiratory pathogens.6

In the last decade, polymerase chain reaction (PCR) has largely replaced traditional diagnostic methods, such as culture and immunofluorescence, for routine testing of respiratory samples.7, 8 In Australia, influenza and pertussis are notifiable conditions under public health legislation, and all cases that meet the case definitions must be reported to state and territory health departments.9, 10 Influenza and pertussis are the two most common vaccine preventable notifiable diseases in Australia,8, 11 and the increasing use of PCR has, in part, been linked to better case recognition and magnification of the number of notifications.8, 12

The incidence of paediatric influenza and pertussis-related ICU admissions has increased in recent years.13, 14 It is unclear whether there has been a true increase in severe disease over this time period, or whether a shift in diagnostic methods (to PCR) has led to improved case detection and therefore more accurate coding of admissions. To date, only two Australian studies have reported diagnostic testing use among pertussis and influenza hospitalisations, however these studies focused on overall laboratory findings and not changes to laboratory methods over time.3, 15 The aim of this study was to investigate the use of PCR in the ICU-setting by reviewing the diagnostic testing of pertussis and influenza-related paediatric ICU admissions in Queensland, Australia, over a 17-year period.

Descriptive statistics are presented as frequency (percentage) or median (range) as appropriate. Comparisons between groups were calculated using the non-parametric Mann-Whitney U-test. We calculated the proportion of ICU admissions tested using any testing modality, as well as the proportion of admissions with a matching positive diagnostic test result. All analyses were conducted using Stata statistical software v.12 (StataCorp, College Station, TX, USA). 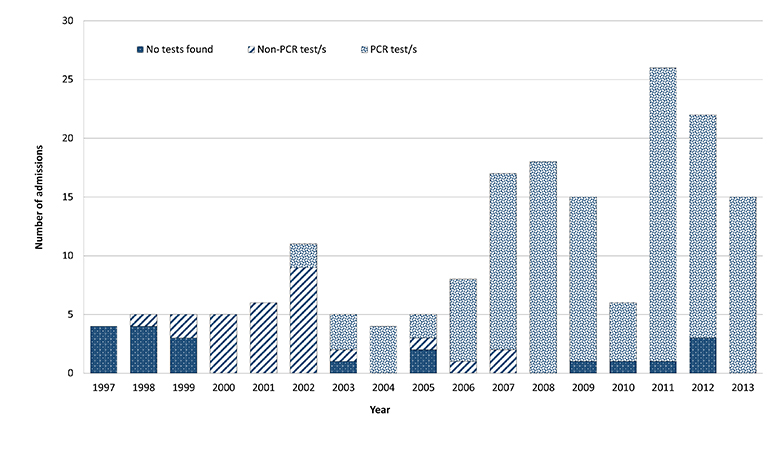 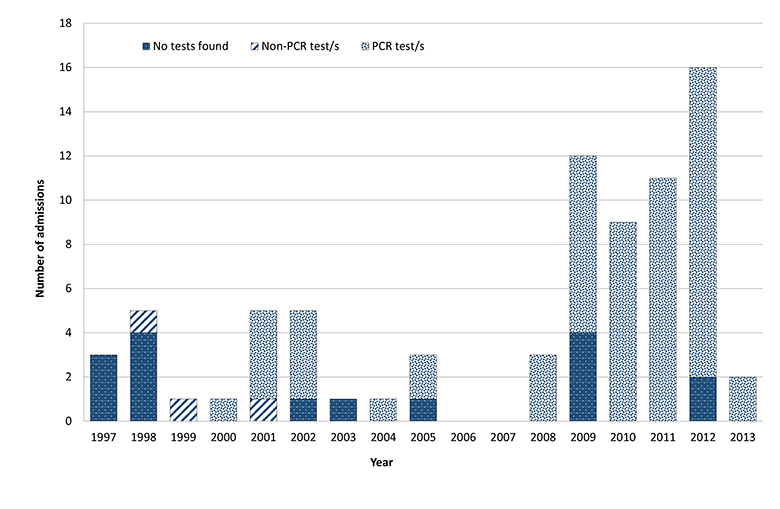 Co-detection of another respiratory pathogen was identified in 14% (n=24) influenza-related admissions and 19% (n=15) pertussis-related admissions (Table 1). Additionally, there were 18 ICU admissions coded as influenza-related, that tested negative for influenza but positive for one or more respiratory pathogens, including: parainfluenza (type 2 n=1, type 3 n=9), rhinovirus (n=5), Haemophilus influenzae type B (HiB, n=2), and respiratory syncytial virus (RSV, n=2). Among these 18 admissions, only one HiB-positive admission and both RSV-positive admissions had relevant HiB or RSV-specific ICU diagnosis codes in addition to the influenza ICU diagnosis code. There were no influenza/pertussis co-detections.

The vast majority of paediatric ICU admissions for influenza and pertussis in Queensland, Australia, between 1997 and 2013 had at least one pathogen-specific diagnostic test conducted. This aligns with the clinical imperative to identify the aetiology of severe respiratory illness. For both illnesses, PCR largely replaced other methods over time and became the predominant diagnostic test, mirroring what has previously been observed among national influenza and pertussis notifications.8 Interestingly, the move to PCR testing appears to have occurred earlier among ICU admissions (from approximately 2001-2002 onwards) than among notifications (from approximately 2007 onwards).8 As PCR testing was still relatively novel in 2001-2002, its use at that time will have been expensive, limited to larger laboratories, and run as one-off diagnostic tests rather than mass routine testing.17 However the benefits of PCR compared to culture, such as much higher sensitivity (94% vs. ~15%, respectively) and faster results,18 likely still made it a preferable choice for clinicians treating infants with severe respiratory infections. It was only in 2005 that public funding commenced, under the Australian Government-funded Medicare Benefits Schedule, for laboratories to test clinical specimens using PCR.19 Additionally, during the 2009 H1N1 influenza pandemic, public funding was allocated to laboratories to purchase equipment (notably PCR suites) to enhance capacity.20 While funding facilitated the expansion of PCR availability, the development and use of large-scale, multiplex PCR assays has allowed testing and identification of a broader range of respiratory pathogens, including the detection of co-infections.21-25

The ANZPIC Registry is a well-established dataset, and has been collating data from participating ICUs since 1997. A particular strength of the Registry is that it captures data from the two large dedicated PICUs in Queensland, as well as from three smaller general ICUs in more regional areas, therefore capturing the vast majority of paediatric ICU admissions across the state and allowing generalisability of the findings. Additionally, by keeping data definitions largely consistent over a 17-year period, it provides the opportunity to analyse trends over a long time frame. A limitation of the ANZPIC Registry is that laboratory results are not captured, and the diagnosis codes have not previously been validated. We found that for approximately 70% of influenza and pertussis-related ICU admissions there was a corresponding relevant positive influenza or pertussis laboratory test result. When limited to only those admissions that had a diagnostic test conducted (89% of influenza-related admissions, 80% of pertussis-related admissions), approximately 85% had a matching positive result. We were unable to locate any previous studies, specifically validating coding for ICU admissions, with which to compare our results. Our findings however, were consistent with a previous study which validated the ICD-10 coding of influenza and pertussis hospitalisations in Western Australia.15

Our results likely represent minimum values as we were reliant on the accuracy and completeness of the databases that we used. We included all ICU admissions coded as influenza and pertussis, however any admissions that were due to, but not coded as, ‘influenza’ or ‘pertussis’ would have been missed. Similarly, as we did not include a medical chart review, we will have included any admissions incorrectly coded as influenza or pertussis-related. For example, we identified 18 influenza-coded ICU admissions that were negative for influenza, but positive for other respiratory pathogens. While these ICU admissions may have been diagnosed as influenza-related based on clinical symptoms, it is possible that there was some misclassification with the ANZPIC Registry coding, particularly influenza coded admissions where parainfluenza or Haemophilus influenzae type B were laboratory diagnosed. Additionally, although we conducted an extensive search of the pathology datasets, any diagnostic tests not contained within the database, for example, tests conducted by a private pathology provider or outside of our search criteria (between 14 days before ICU admission through to 7 days after ICU discharge), will have been missed. However, it is reassuring that the majority of ICU admissions had at least one diagnostic test identified.

The move to PCR testing in the ICU setting, allowing more sensitive and rapid diagnosis of respiratory pathogens compared to earlier diagnostic methods, may have improved clinical management of severe paediatric pertussis and influenza infections and led to a reduction in overall health care costs. Compared to bacterial pathogens, viruses are more commonly responsible for acute respiratory infections in children.7, 26 Therefore rapid detection of a bacterial pathogen may aid a clinician’s decision to prescribe and/or continue appropriate antibiotics, thus likely improving clinical management.26 Although detection of a viral pathogen in a general practice setting would allow a GP to withhold antibiotic treatment, in the ICU setting, viral detection may not alter antibiotic use due to concerns of secondary bacterial infection.7, 26 However additional (often unnecessary) laboratory tests or diagnostic imaging, pursued where the illness aetiology is not yet established, may be avoided due to the fast turn-around of PCR results, contributing to an overall reduction in health care costs.7, 27 Furthermore, rapid diagnosis in a hospital/ICU setting would allow appropriate infection control measures to be enforced, limiting the likelihood of nosocomial infections.7

In conclusion, PCR has become the preferred diagnostic method in influenza and pertussis-related ICU admissions. This finding mirrors the trends observed more broadly across other health care settings.

We thank the intensivists, data managers and other staff in the participating ICUs for contributions to the ANZPIC Registry, and Jan Alexander for her assistance with the data request. The ANZPIC Registry is administered by the Australian and New Zealand Intensive Care Society Centre for Outcomes and Resource Evaluation (CORE), and is supported by the Ministry of Health (New Zealand), and State and Territory Health Departments.

SBL reports not having shares, paid employment, or consultancies with any influenza vaccine manufacturer; he has been an investigator on vaccine and epidemiological studies sponsored by bioCSL, Merck, GSK, Novartis, and Sanofi; his institute has received honoraria from Merck for talks he has given on rotavirus epidemiology and vaccines. Authors MCK, SS, RSW, JAM, and MGC declare that they have no competing interests.